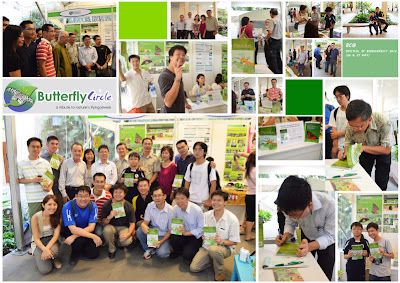 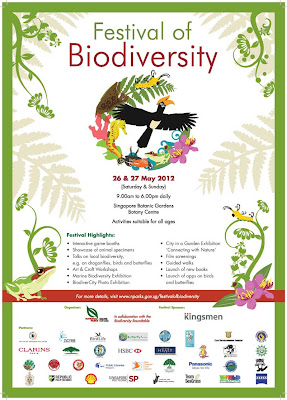 This was the first time ButterflyCircle was represented at a public event and we made the extra effort to showcase our mission and objectives of our online community of butterfly enthusiasts and photographers.  A good start was to portray ButterflyCircle members' works in a poster collage of photos and projects in which we were involved.  The poster was ably designed and put together by CJ, who spent a commendable effort on the two A0-sized boards. 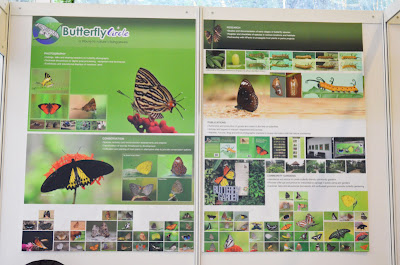 On Saturday, ButterflyCircle's booth was manned by several volunteers, notably our two young and energetic 'youth-wing' members, Brian Goh and Jonathan Soong.  They were there at the booth as early as 9am, and joined later by our infamous twins, Mark and Anthony.  NParks' Rachel Lim, who commenced the sale of the "Caterpillars of Singapore's Butterflies" at the special Festival price of S$20 (normal price S$26). 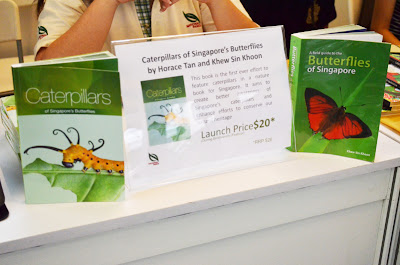 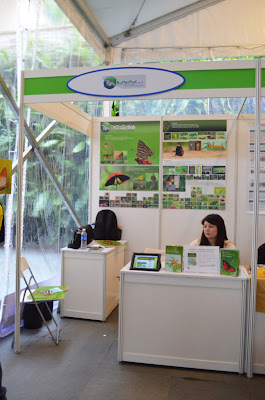 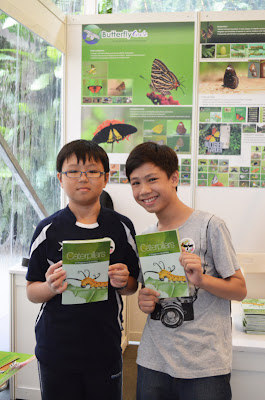 
As the day wore on, more ButterflyCircle members turned up to support.  Our booth was teeming with activity as the caterpillar book sales picked up with more members of the nature community and public showing keen interest in a book that exclusively features caterpillars for the first time in Singapore.  Horace and I were there to autograph the books for the buyers who were keen to get the authors signatures to their latest book to add to their collection. 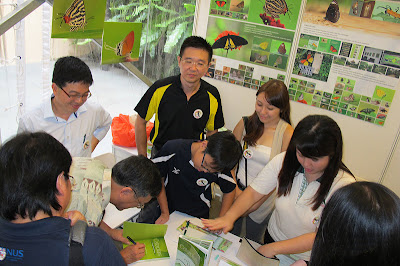 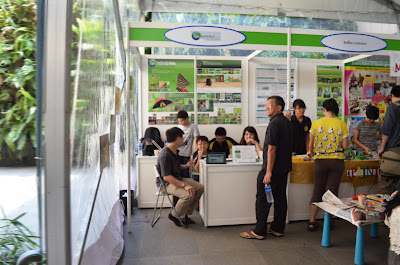 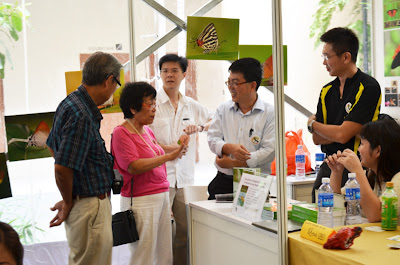 At around 3:30pm, just before the official launch of the Festival of Biodiversity by President Tony Tan Keng Yam, the President of the Republic of Singapore, more members showed up in full support of ButterflyCircle.  At least 30 of our more active members showed up, including several members who had gone into hibernation due to their own work or family commitments.  It was a time to catch up with old friends and make new ones! 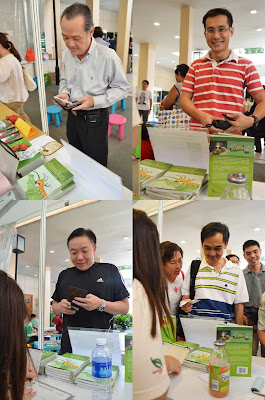 
When the President arrived, the crowd gathered at the Function Hall.  Minister of State, BG(NS) Tan Chuan Jin gave the opening address to the nature community. He shared many government initiatives to enhance Singapore's biodiversity and to encourage the public to be aware and conserve our rich natural heritage. 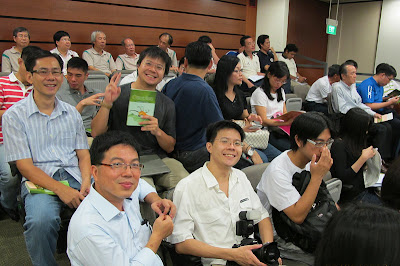 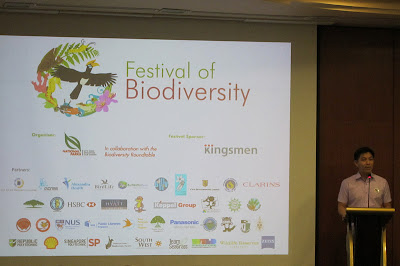 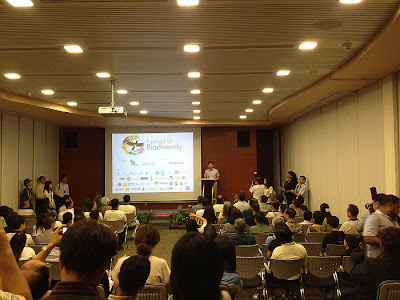 President Tony Tan then went on stage to launch two new books - "Our Fragile Rainforest" by Leong Tzi Ming and James Gan and ButterflyCircle's own "Caterpillars of Singapore's Butterflies" by Horace Tan and Khew Sin Khoon.  Our special thanks also, to MOS Tan Chuan Jin for penning the foreword in our book. 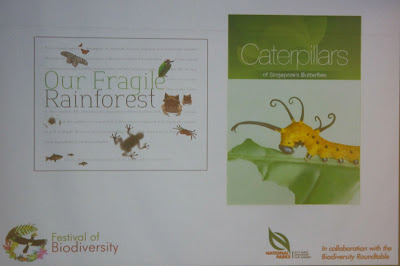 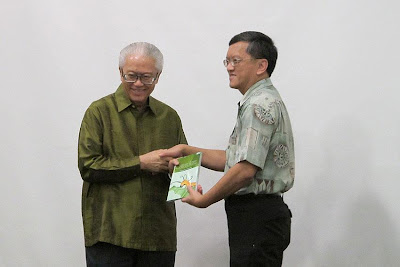 Presenting the Caterpillars of Singapore's Butterflies to President Tony Tan


After the formalities, the VIP entourage went on a tour to the exhibitions and booths on the 1st and 2nd levels of the Botany Centre.  Thanks to NParks, all the booths were well organised and adequately protected from the elements with transparent plastic curtains.  Fortunately, the rains stayed away, and everyone enjoyed good sunny (albeit hot and humid) weather. 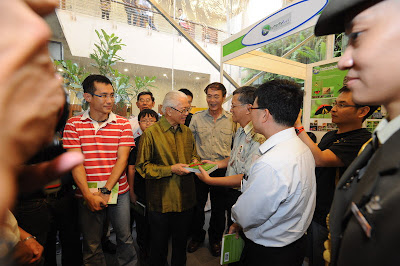 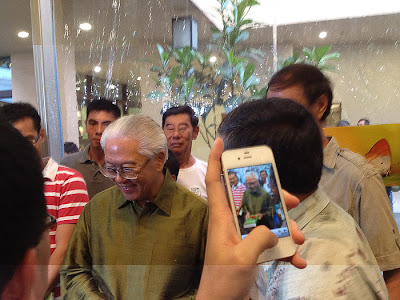 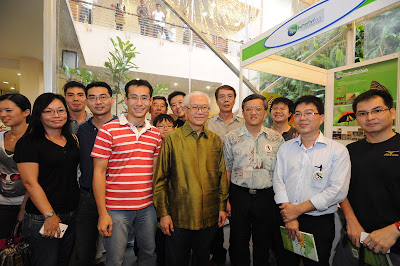 
President Tony Tan was given a quick tour of ButterflyCircle's booth and I also presented him a copy of our first book, "A Field Guide to the Butterflies of Singapore".  The President gamely posed for a group shot with ButterflyCircle's members who were there at the booth. 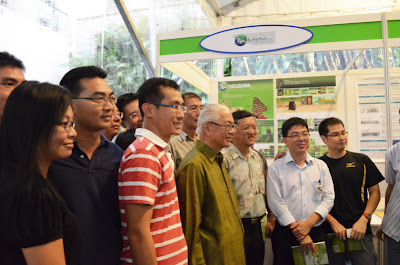 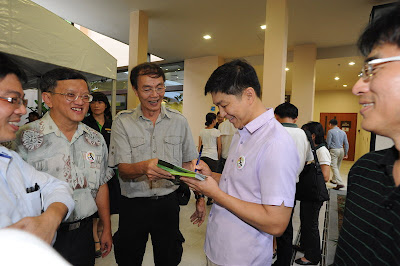 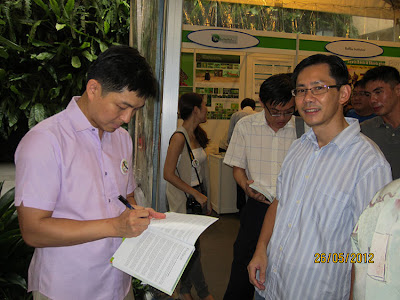 
MOS Tan sportingly autographed the books of our members who were brave enough to request for his signature, starting with our enthusiastic Brian Goh.  As the other members saw how approachable and friendly MOS Tan was, there was soon a queue to get his autograph!  It was heartwarming to note that MOS Tan carefully penned a few personalised words for each of our members, rather than just signing his name.  Thanks MOS Tan!  :) 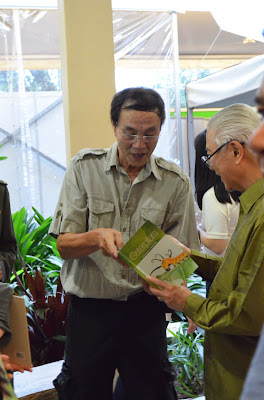 Sunny with the President 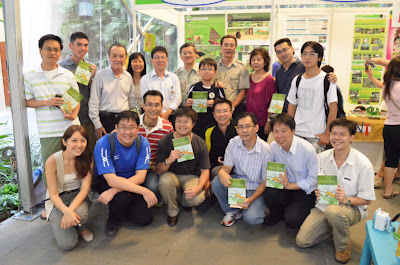 
All too soon, it was time to bid farewell as everyone left with a memorable experience of this special day for ButterflyCircle, and also the nature community in Singapore.  As I had to rush to the airport to catch a late night flight to Beijing, I missed the further excitement of Part II of the Festival on Sunday.  All in all, it was a good experience for everyone involved in the Festival, and I would like to take this opportunity to thank our members who turned up in force to support us.

We look forward to the next Festival of Biodiversity in 2013!

Acknowledgements : Special thanks to Huang CJ for the design and production of ButterflyCircle's posters for the booth.  Thanks to Mark Wong, Anthony Wong, Jonathan Soong, Goh EC, Brian Goh, Loke PF, Sum CM & Federick Ho for helping out at the booth.  Rachel Lim and staff of NParks for kindly agreeing to sell our book at the BC booth.  And of course, my hardworking co-author, Horace Tan for contributing his effort and time to make the book a reality!


Other Links to the Festival of Biodiversity

Hi, i am from Sri lanka and i really interested in butterflies of asia. So i am willing to buy those two books to increase my knowledge and please guide me to buy those books. it would be a great help to my learning process thanks in advance