Revision to the Common Names of Butterflies 2

A Revision to the Common Names of Butterflies
Part 2 : An Analysis of Name Changes


We had earlier discussed the changes to the common names of butterflies in Part 1 of this series, where we agreed with Dr Kirton's changes due to "socially unacceptable reasons". In that article we featured butterflies with names like Nigger, Darkie or Brownie, which carried ethnic slurs that would be politically incorrect in today's social context. 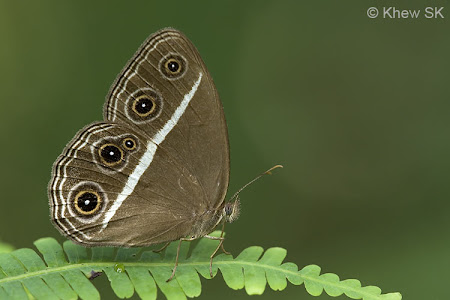 
In Part 2 of our discussion on the changes to the common names of butterflies, we take a look at some of the name changes and in some cases, offer an alternative perspective to these changes. In the study of zoology, and in particular, Lepidoptera, scientists often divide the world into eight specific faunistic zones, often referred to as ecozones. An ecozone is the broadest biogeographic division of the Earth's land surface, based on distributional patterns of terrestrial organisms. 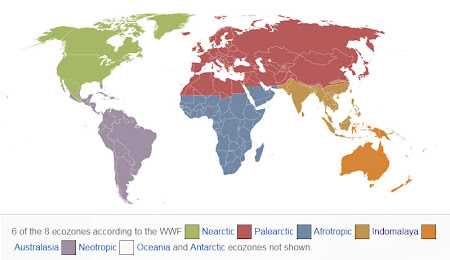 The eight ecozones are, (based on World Wildlife Fund definition) the Palearctic, Nearctic, Afrotropic, Neotropic, Indo-Malaya, Australasia, Oceania and Antarctic.  The Indo-Malayan region, which is the area of interest as far as butterflies of Malaysia and Singapore are concerned, comprises South Asia covering India, Bangladesh, Pakistan and Sri Lanka, Thailand, Myanmar, Laos, Cambodia, Vietnam and southern China, the Malay Peninsula and Singapore, the Large Sunda islands (Sumatra, Borneo and Java), the Philippine Islands, Sulawesi and Lesser Sunda Islands as far east as Timor. 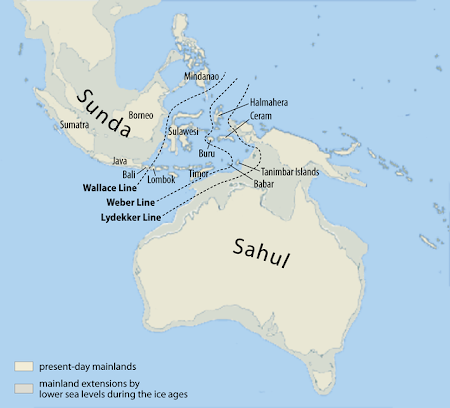 
The zoogeographical subregion of the Indo-Malayan ecozone, known as the Sundanian Subregion (or often called Sundaland) comprises the Malay Peninsula (including Singapore), Sumatra, Borneo, Java and their satellite islands, and Palawan in the Philippines. It is largely the Sundaland subregion which we are concerned with, pertaining to the butterfly fauna of this region, and from which we base our literature reviews of books published about the butterflies in these countries. 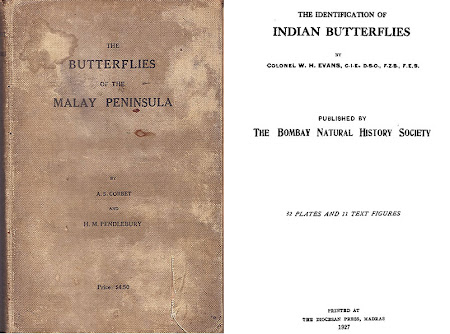 
Whilst there is no doubt that one of the first published literature which coined English common names for butterflies was already available for butterflies in the Indian subcontinent, e.g. "The Identification of Indian Butterflies by W.A. Evans in 1927, we also take into account that the earliest reference to the butterflies in Malaya/Malaysia and Singapore is "The Butterflies of the Malay Peninsula" by A.S. Corbet & H.M. Pendlebury in 1934. 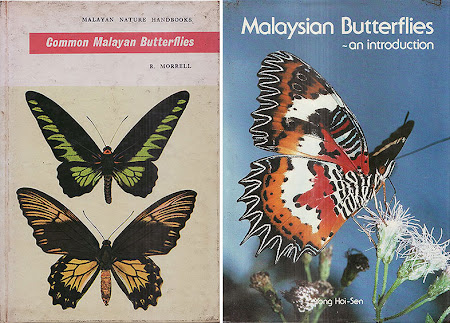 In the 60's and 80's, two more reference books, targeted for the amateur butterfly enthusiasts were published. The use of English common names (or trivial names) was more evident in these two references. These were "Common Malayan Butterflies" (CMB) by R. Morrell (in 1960) and "Malaysian Butterflies - An Introduction" (MBAI) by Prof Yong Hoi-Sen (in 1983). In the meantime, the 2nd, 3rd and 4th editions of "The Butterflies of the Malay Peninsula" were printed in 1956, 1978 and 1992 respectively. 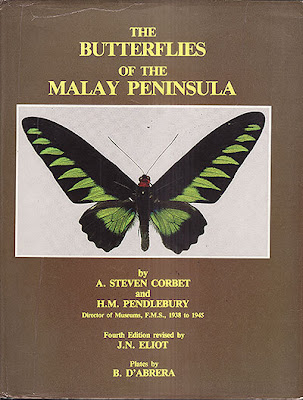 It is with the background of these references, that we base our discussions and opinions on the English common names of butterflies in Malaysia and Singapore, and any revisions or publications that come thereafter, on butterflies of the Sundaland subregion. 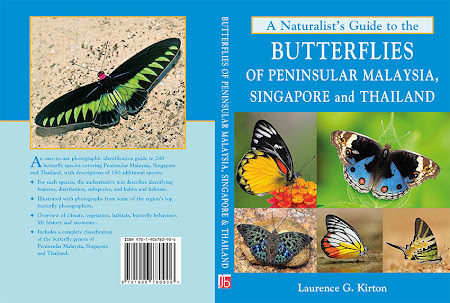 In the review of the English common names suggested in Dr Kirton's latest book "A Naturalist's Guide to the Butterflies of Peninsular Malaysia, Singapore and Thailand" (BPMST) we will start with a discussion on the species that are found in Singapore first. Future discussions will dwell on the species beyond Singapore's shores. 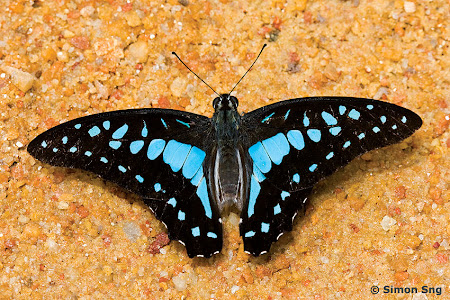 Dealing with the names by the butterfly families, we first take a look at the genus Graphium. In particular, the species Graphium evemon eventus. Based on our literature research on the early references, the name "Lesser Jay" was first used by Evans in his 1927 book. Other early authors declined to give a common name to this species. In the 90's the name "Blue Jay" was coined for the Singapore butterfly fauna, and through regular usage over the years, the name stuck. 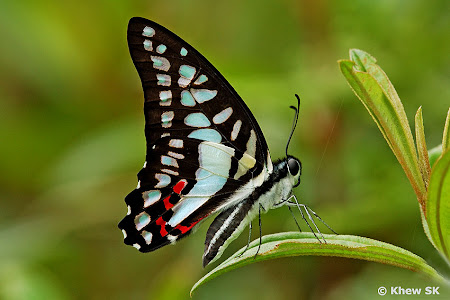 ButterflyCircle's "Butterflies of Singapore" (BOS) launched in 2010, the name Blue Jay was also adopted for Graphium evemon eventus. Many online references also used Blue Jay. To be consistent with the names used in the Indo-Malayan ecozone, the common name Lesser Jay should be adopted for this species henceforth.

Recommendation : Graphium evemon eventus should be referred to as the Lesser Jay. 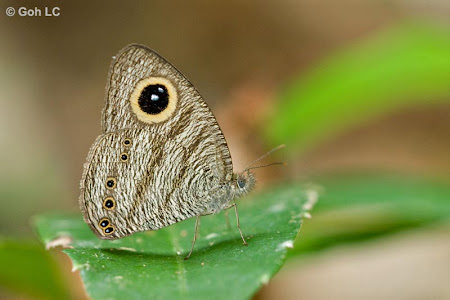 The next species in the list is Ypthima horsfieldii humei. This species was given the common name the Malayan Five Ring by Pisuth Ek-Amnuay in his book, Butterflies of Thailand 1st Edition (BOT1) in 2006. The same name was also used in BOS. None of the early references by Evans nor C&P had a common name for this species. 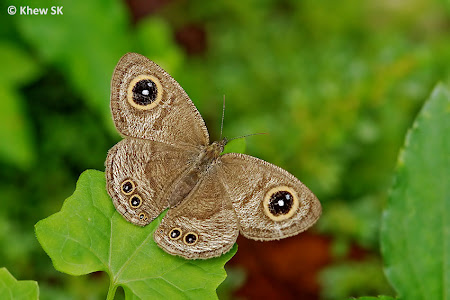 In BMPST, Dr Kirton used the name Horsfield's Five Ring for this species. We do not see the rationale nor necessity to change the name, as the name does not appear to be used for any other species nor is confusing. The closely related species, Ypthima baldus newboldi is called the Common Five Ring, which causes no ambiguity with Ypthima horsfieldii humei. 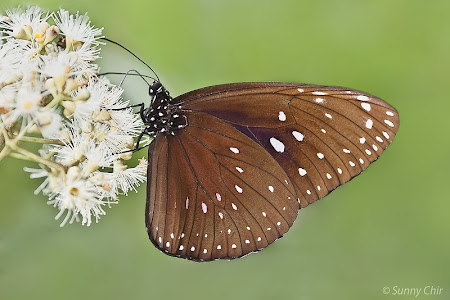 We move on to the subfamily Danainae and start with the Euploea or commonly referred to as the "Crows".  The first proposed change in BPMST was Euploea phaenareta castlenaui. The English common name is the Great Crow. This name was first coined by Evans for the species Euploea corus corus. This species was later revised to E. phaenareta, hence the reference to the Great Crow. 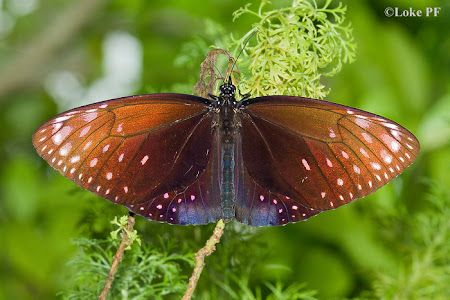 Closer to home, BOT1 and BOT2 also refers to E. phaenareta as the Great Crow. Through regular usage in Singapore, the English common name for this species is the King Crow, and is used in BOS as well as many online checklists. Again, for consistency and due to the taxonomic changes to the species' latin name, we acknowledge that E. phaenareta should be changed to Great Crow. 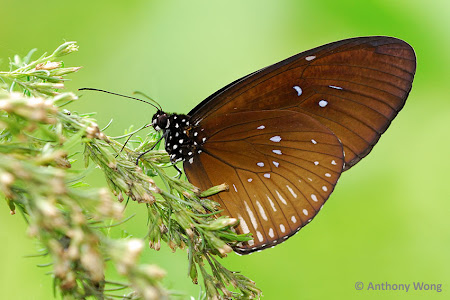 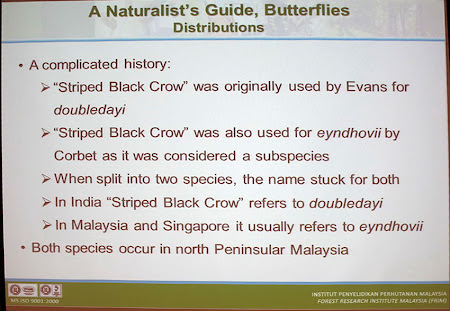 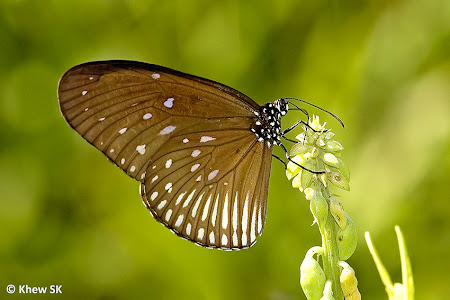 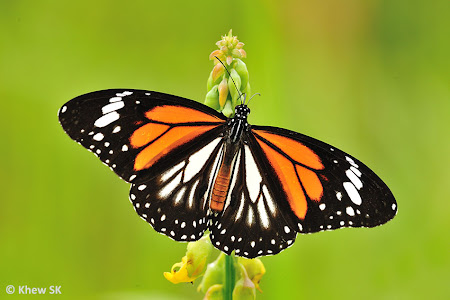 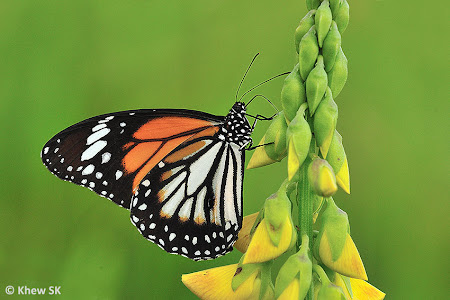 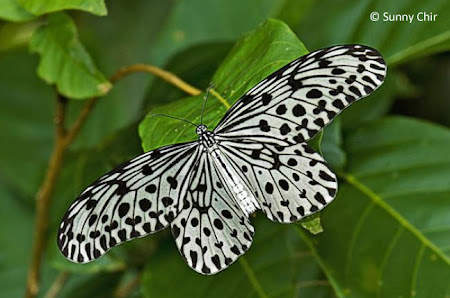 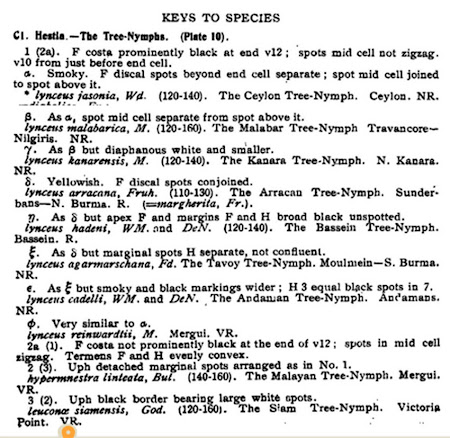 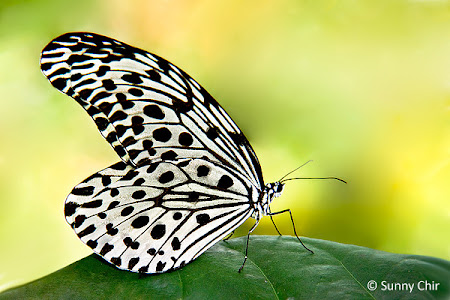 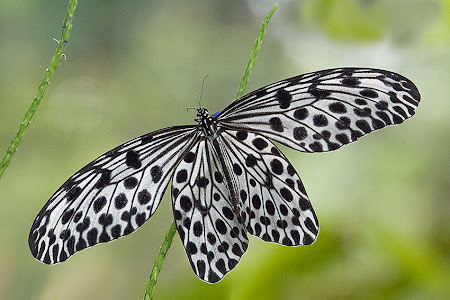 In BPMST, Dr Kirton adopted the name Ashy-White Tree Nymph for Idea stolli logani. It would appear that this 'newly invented' name originated from BOT1 by Pisuth. The descriptor "ashy-white" would normally refer to something that is greyish in colour (ash), and does not appear to be appropriate for Idea stolli which certainly appears much whiter than Idea lynceus. If anything, this name could be more suited to Idea lynceus. But it is already called the Tree Nymph. Hence we propose that the name Common Tree Nymph continues to be adopted for Idea stolli logani. 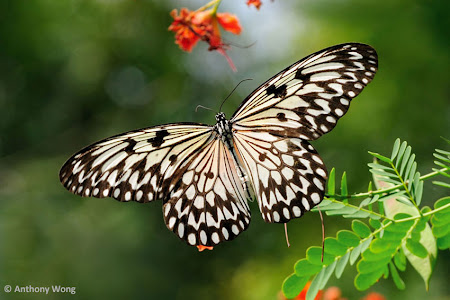 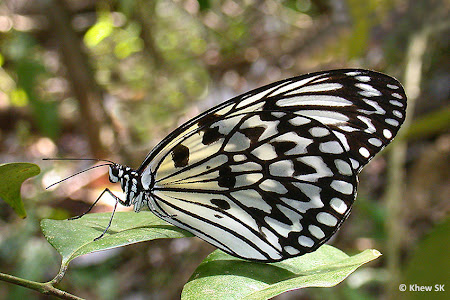 There are many subspecies of I. leuconoe and certain subspecies are easily bred as display species in many butterfly parks all over the world. In particular, the subspecies from Taiwan, ssp clara appears to be the one that is abundant in butterfly parks. However, the subspecies that occurs as a native species in Malaysia and Singapore (including the Indonesia islands close to Singapore) is ssp chersonesia. Morrell in CMB and Corbet in C&P4 both describe this subspecies as "a seashore species and frequents mangrove areas" and "confined to mangrove swamps". In BPMST, Dr Kirton refers to Idea leuconoe as Large Tree Nymph. It would be more definitive and appropriate to refer to Idea leuconoe chersonesia as the Mangrove Tree Nymph to better describe its association with mangrove habitats in Malaysia, Singapore and Indonesia.

Posted by Commander at 9:39 PM 2 comments