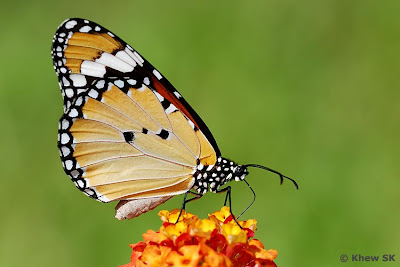 A female Plain Tiger feeds on the flower of Lantana camara

Whenever a casual observer thinks of a butterfly feeding, the image of a pretty butterfly fluttering above a colourful flower, with its proboscis extended into the flower, comes to mind. Indeed there are species of butterflies that feeds on many species of flowering plants for their daily sustenance to imbibe energy-giving nectar from the flowers. However, it should be pointed out that butterflies' diet is not all 'sugar and spice and everything nice'. Read on... 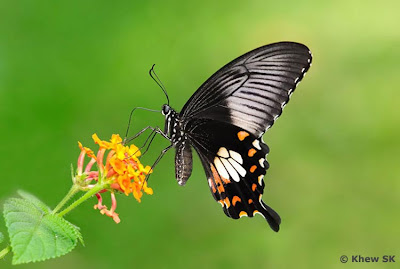 In Singapore, we have observed that many butterflies have a number of favourite nectaring plants, some of which attract a larger proportion of butterflies as compared to other flowering plants. 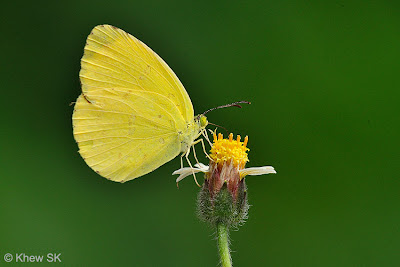 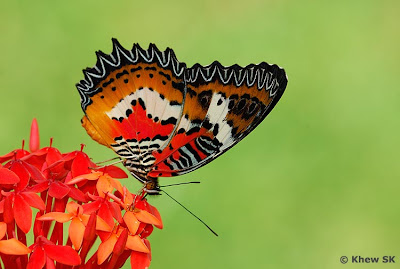 A new blog series featuring some of these all-time favourites amongst the flowering plants that butterflies prefer will be started in this blog in the coming months. 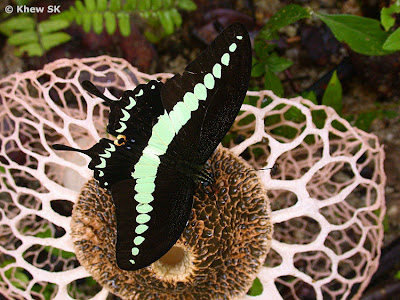 A Banded Swallowtail on a flowering Stinkhorn fungus

However, it should be noted that not all butterflies feed exclusively on flowers only. In fact, there are some species that spend all their lives feeding on other sources of food besides flowers. 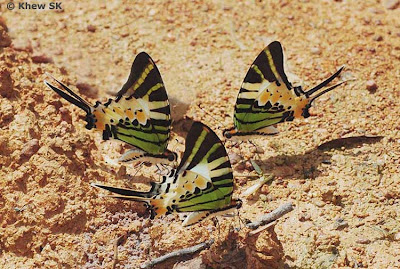 An adult butterfly, unlike the form that it spent its earlier life as a caterpillar, has no chewing parts. Instead of biting and chewing leaves, metamorphosis transforms the butterfly with a significant change in its feeding apparatus. The adult butterfly now has a proboscis. The details of the proboscis has been dealt with in an earlier article on this blog. 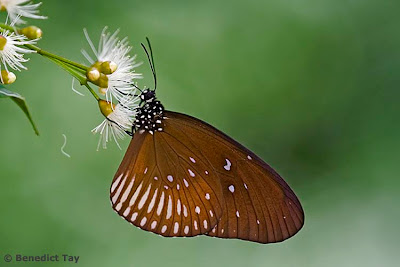 Muscles in the head of the butterfly enable the sucking action through its proboscis and thereby allowing it to absorb a liquid intake through its straw-like apparatus. Like all living things, an adult butterfly needs to feed regularly to replenish the energy that it uses up for reproduction, defence, communication, neurotransmission and essentially, to 'feed' its active lifestyle of flying around for its daily activities. 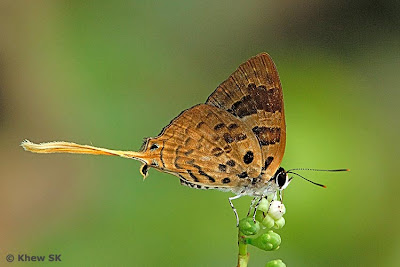 Nectar is often the main ingredient that satisfies the need for energy and water. Nectar is essentially a source of sugar (usually glucose, sucrose and fructose) needed to power the butterfly's activities during the day.
Not Only Nectar on the Menu 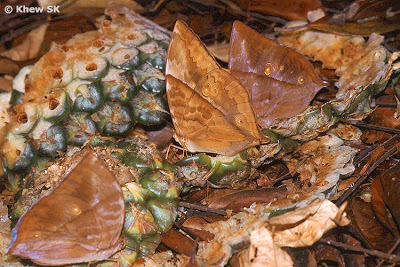 Besides nectar from flowering plants, sugars and alcohols for energy can be obtained from rotting fruits. They are also a good source of protein that a butterfly requires for reproductive activities. There are many species of butterflies - those that lurk on the shaded forest are typical of these, that feed on rotting fruits that drop on the forest floor. 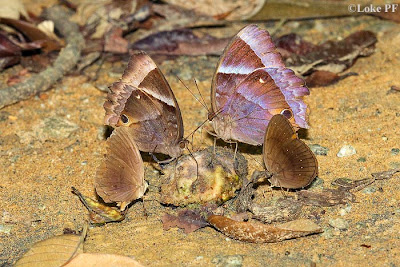 Typical of the rotting fruit that butterflies feed on are fruits like banana, papaya, watermelon, figs, berries and other such sweet-smelling offerings in the forests. In many cases that we have observed the butterfly that had been feeding on these sugary diet become so intoxicated as to stay still and continue feeding greedily that it becomes vulnerable to a predator. 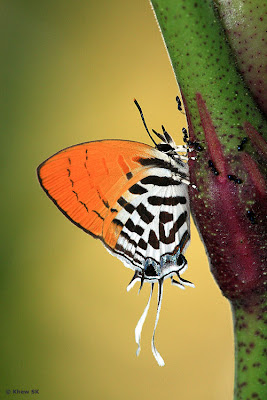 Other species are also partial to oozing sap from wounded plants or the sugary-sweet young shoots of some plants. 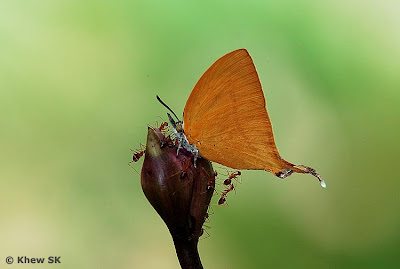 In the latter example, they often compete with ants for the sugary bounty of these young shoots, often without any confrontation whatsoever, as both the butterflies and ants share the spoils together. 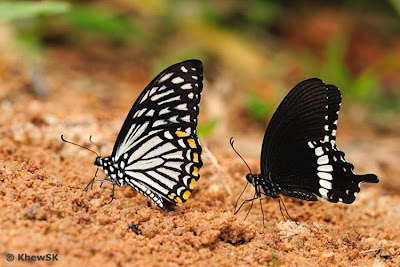 Sodium is also a special ingredient that helps to ensure that a butterfly's nerves work effectively. The chemical is vital for many physiological functions, including digestion, excretion, reproduction and flight. Hence, any concentration of common salt is very attractive to adult butterflies. 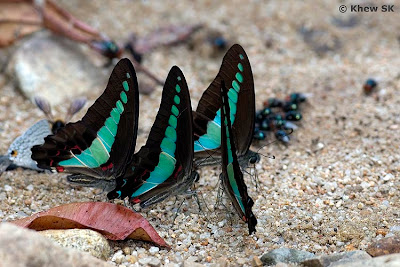 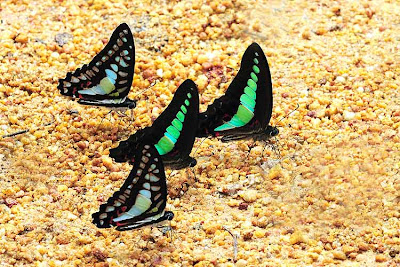 This is the reason for the activity called "puddling" where many species of butterflies, in particular males, congregate at damp spots on the ground, especially where the soil or sand has been tainted with urine, animal fluids and fermenting organic material. 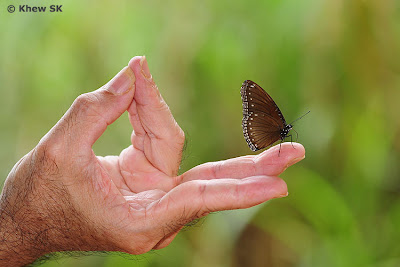 Top : A Malayan Eggfly feeds of a sweaty finger. Bottom : Feeding off a sweat-soaked backpack

Sodium is also the reason why many species are attracted to our sweaty hands and bodies, where the butterflies come back time and again to feed like an irritating mosquito! Even sweat-soaked backpacks, socks and hats are fair game to these butterflies that are hungry for salts. 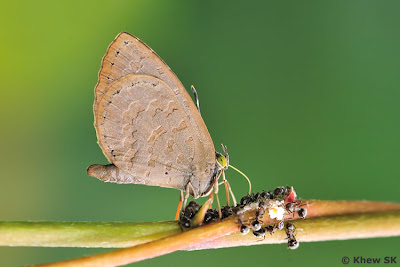 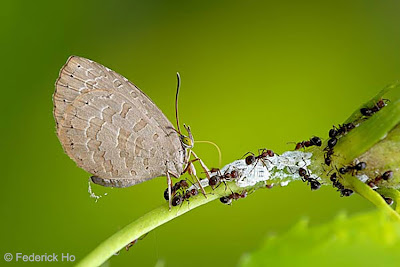 Two Miletinae feeding off the secretions of mealy bugs and coccids

There are some species, particularly of the Miletinae, that feed on the sugary secretions of Homoptera like Aphids, Coccids and Mealy Bugs. Besides their caterpillars feeding on these insects, the adult butterflies also benefit from feeding on their secretions. 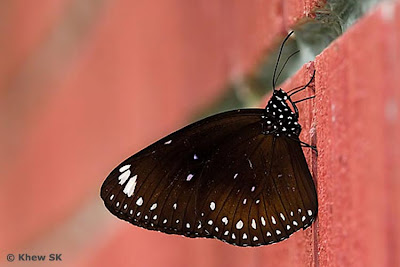 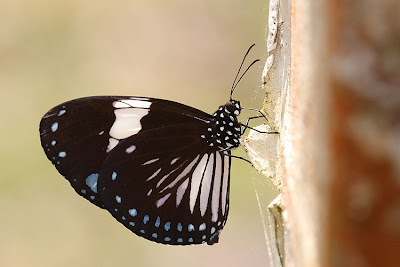 Certain species of the Danainae exhibit interesting feeding preferences, and they are also occasionally observed feeding off the efflorescence from brick walls and damp timber structures. The salts from such efflorescence should also contain the sodiums that the butterflies look for in their diet. 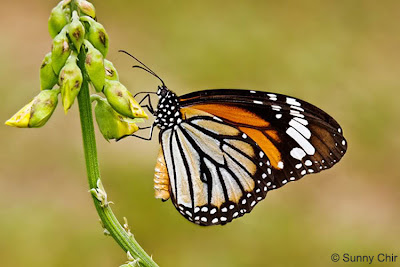 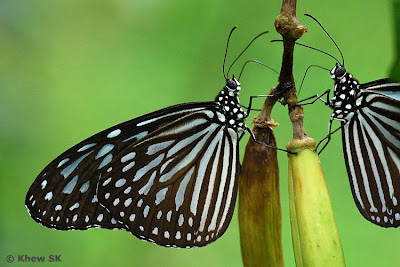 Two Danainae trying to get more alkaloids from various plants

Again, amongst the Danainae, several species have a habit of using their sharp tarsal claws to scrape channels on the seed pods of the plant Crotalaria spp. and then regurgitate a little fluid from their proboscis to mix with the chemicals and then imbibe the mixture. 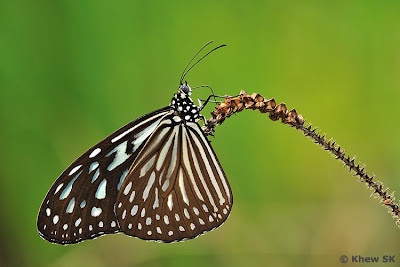 The same behaviour is also seen when they feed on the dried plants and flowers of Heliotropium indicum. This action is supposedly to extract the chemical pyrrolizidine alkaloids from these plants to aid in their defence mechanisms and also to produce pheromones. 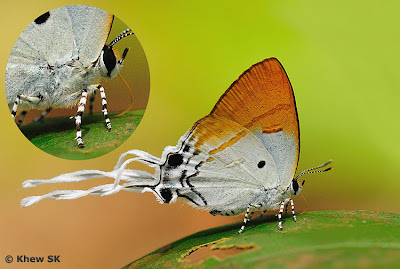 Some Lycaenidae species also feed on damp surfaces of leaves coated with fungus or other types of organic material from which the butterfly also receives nutrients for their sustenance. 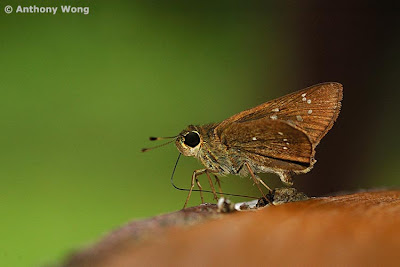 Finally, butterflies being members of the insect world, will also feed on carrion, animal faeces and other less attractive (to us humans!) items as part of their cuisine. Skippers are often observed feeding on bird droppings. 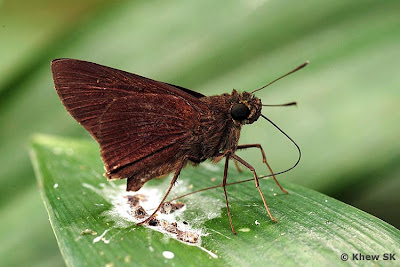 A Paintbrush Swift recycling fluids by excreting onto the bird dropping and mixing the liquids before drinking the cocktail of its own pee. Yuck!

It is also interesting to observe an unique behaviour where the butterfly arches its abdomen onto the meal and "pees" onto it, and then uses its extra long proboscis and feeds on the mixture of its own excretions on the bird dropping. The reason for this action that appears to be recycling the food is not clearly understood. 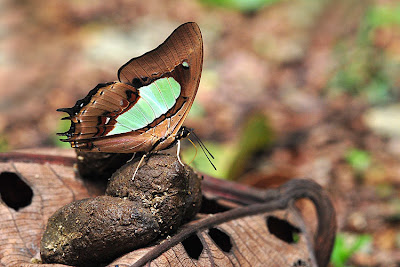 Waiter! This meal tastes like crap! Wait a minute, it IS crap!!

Other spectacular butterflies, particularly of the Charaxes and Polyura, are known to be partial to animal faeces. Amongst collectors of these sought-after species, the little secret is to bait them with tiger dung! But I have observed a Plain Nawab enjoying a meal out of a lump of faeces, probably from a monkey or a dog, perhaps. But let's hope the last bit of this article does not spoil your appetite! And let's go back to the sweet impression of that pretty butterfly feeding on a colourful flower and leave our winged friends to enjoy the wide variety of cuisine on their food menu, especially those which are not our cup of tea!
Text by Khew SK : Photos by Sunny Chir, Federick Ho, Khew SK, Loke PF, Benedict Tay & Anthony Wong
Posted by Commander at 11:49 PM 1 comments