Life History of the Metallic Caerulean 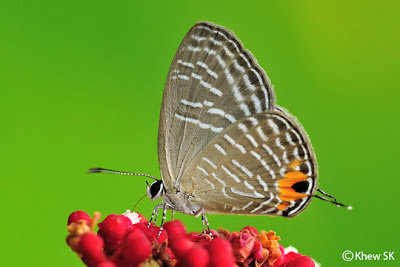 Physical Description of Adult Butterfly:
The Metallic Caerulean is described as the largest species in the elpis subgroup, which is characterized by the post-discal band on the forewing beneath being completely dislocated at vein 3. The male of the species has a black diffuse border on the forewing, expanding to about 1mm at the apex and a series of black marginal spots on the hindwing. The female has the forewing border extending narrowly along the costa to the base. The Metallic Caerulean has bright metallic blue uppersides, and grey ground colour on the undersides with the usual white banding. On the hindwing, there is a black centred orange-crowned eyespot at the tornal area, with some additional submarginal orange markings along veins 1b and 4. There is a white-tipped filamentous tail at vein 2 of the hindwing. 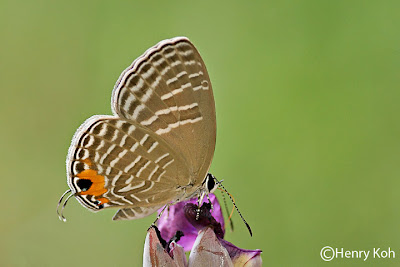 A Metallic Caerulean perching on a flower. 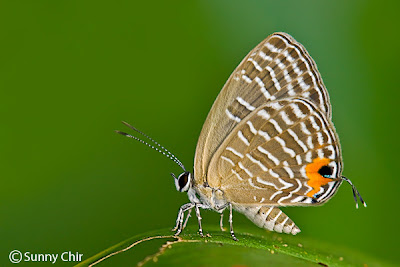 Another Metallic Caerulean perching on a leaf blade. 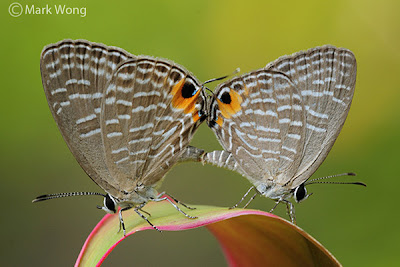 A mating pair of Metallic Caerulean

Field Observations of Butterfly Behaviour:
This species was listed as being extant by pioneer researchers, but has not been seen in recent years until a colony was sighted and identified in the second half of 2008 thriving in the vicinity of a cluster of Torch Ginger plants by ButterflyCircle members. The adults have a rather quick but erratic flight, and for most of the day, are active and fly in a small area encircling the host plants. Males tend to stay higher up and chase each other in the bright sunshine. Very often both sexes stop to rest in the shade on the uppersides of leaves and demonstrates the movement of the hindwings and tails in the usual Lycaenid fashion. The male has also been found to puddle on bird droppings.

Early Stages:
The local host plant, Nicolaia elatior (Torch Ginger) is a herbaceous perennial plant and grows in large clumps up to about 6m tall. The elongated leaves occur in two alternate rows above the stem. It has showy and pinecone-shaped flower heads, each about 7-10cm long, subtended by large crimson or pink bracts and seated on a long stalk. Various parts of the Torch Ginger are known to have folk medicinal uses. 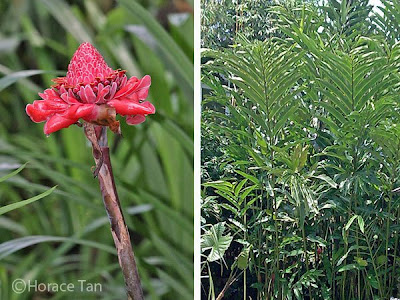 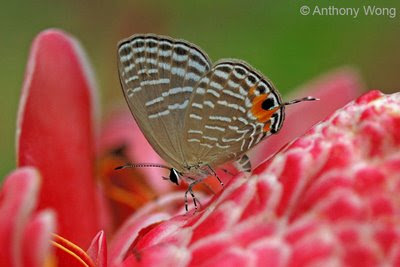 A mother Metallic Caerulean laying her eggs on a Torch Ginger flower.

Following the recent discovery of Saraca cauliflora being utilized by two other member species of the elpis subgroup, a successful attempt was made to breed Metallic Caerulean on the Saraca flowers. This establishes the possibility that Saraca cauliflora is an alternate host plant in the wild. The life history recorded and reported in this article is based on two Metallic Caerulean specimens being bred on the Saraca flowers throughout their larval phase. 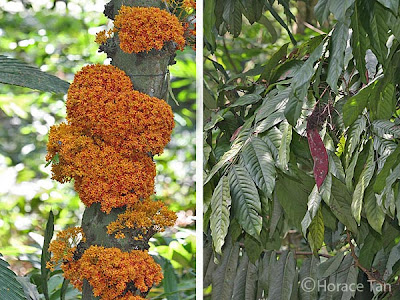 Eggs of Metallic Caerulean are laid singly on an inflorescence of Torch Ginger, typically on the pinecone-like scales above the waxy bract. However due to the large size of the inflorescence, it is not uncommon to find several eggs on one single inflorescence. The egg is disc-like (about 0.8mm in diameter) with a depressed micropylar, and light green in colour. The surface is covered with a reticulated pattern of intersecting ridges, coarse on the rim, but very finely sculptured on the top flat face. 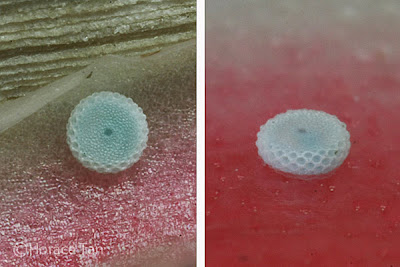 Two views of an egg of the Metallic Caerulean, diameter is about 0.8mm
The collected eggs took two days to hatch. The young caterpillar emerges after nibbling away sufficiently large portion of the egg shell. Measured at a length of about 1.2mm, its pale yellow body is cylindrical in shape, sporting long fine setae (hairs) and a dark head capsule. One can just barely make out the dark brown prothoracic shield which lies immediately behind the head. 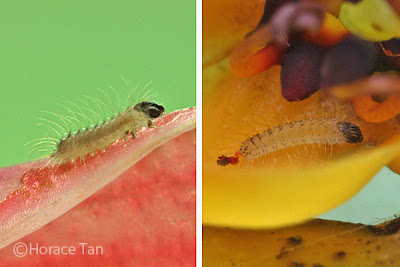 A newly hatched caterpillar of the Metallic Caerulean, length: 1.2mm

The newly hatched grazes on the surface of flower petals or bores into a flower bud for the goodies within. Later instar caterpillars also eat the pedicel of the flowers. As it feeds and grows, it gradually takes on a pale red to pinkish tinge. 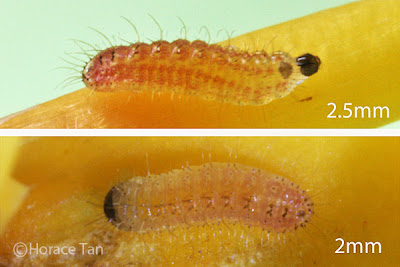 After about 2-3 days of growth and reaching a length of about 2.5 to 3mm, the caterpillar moults to the next instar. The 2nd instar caterpillar has a yellowish brown base color, and reddish brown markings running dorsally and laterally. The body surface appears to be covered with tiny black spots. There are still fine setae but these are now much shorter in proportion compared to those in 1st instar. The prothoracic shield is still dark brown in colour. 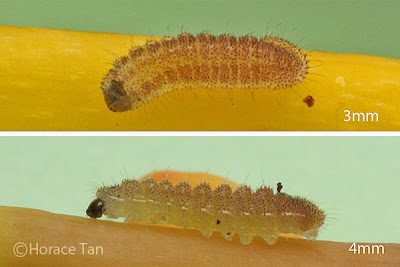 The 2nd instar caterpillar reaches a length of about 5mm, and after about 2-3 days in this stage, it moults again. The 3rd instar caterpillar has proportionately shorter but still numerous body setae. There are dorsal and lateral markings, in light reddish brown, running along body axis. The most prominent change is in the color of the prothoracic shield to the body base color of yellowish brown, and also in the color of head capsule to yellowish brown. The dorsal nectary organ (on the 7th abdominal segment) is present but not marked prominently with any colored rings or markings. The tentacular organ is also observable at this stage. 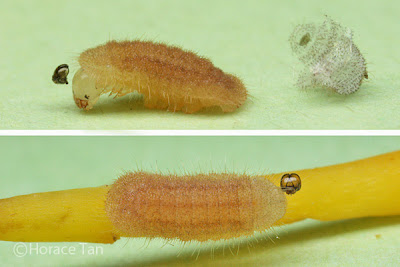 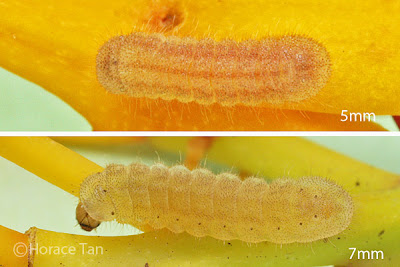 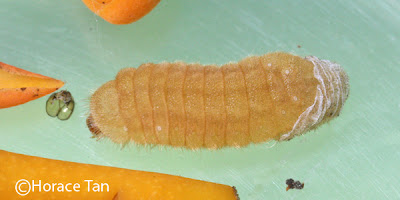 A Metallic Caerulean caterpillar seen in the end stage of its moult to the 4th instar. 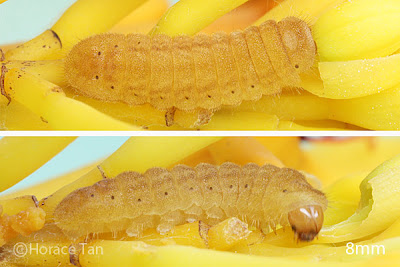 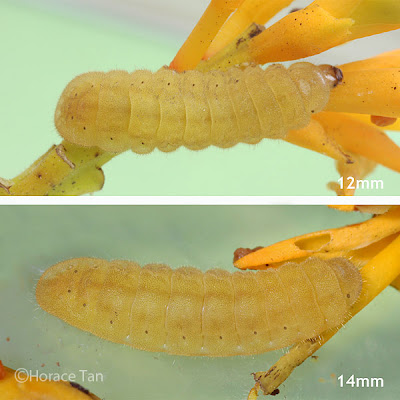 After 5-6 days of growth and reaching a maximum length of around 14mm in the final instar, the body of the caterpillar gradually shrinks, and decolorizes to a very pale yellow coloration. Both bred specimens chose to enter their pre-pupatory phase on the surface of leaves provided. At the chosen spot, the caterpillar readies itself for pupation by spinning a silk girdle and a silk pad. The caterpillar secures itself to the silk pad via claspers on its posterior end. 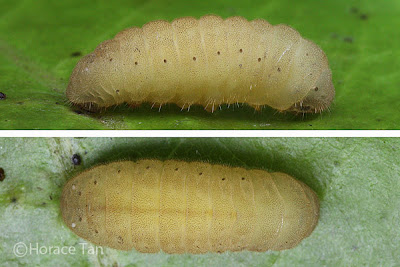 Two views of a pre-pupa of the Metallic Caerulean,

Pupation takes place after one day of the pre-pupal stage. The pupa has the typical lycaenid shape. It is pale yellowish and decorated lightly with a few brown and black specks. The pupa has a length of about 9.5mm. 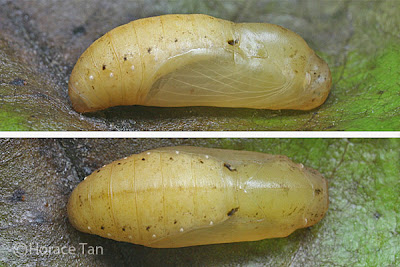 Two views of a fresh pupa of the Metallic Caerulean.

Six days later, the pupa becomes darkened in color signaling the imminent emergence of the adult. The markings on the upperside of the forewing become visible through the pupal skin, and it is now possible to tell the gender of the soon-to-emerge adult. The next day the adult butterfly emerges from the mature pupa. 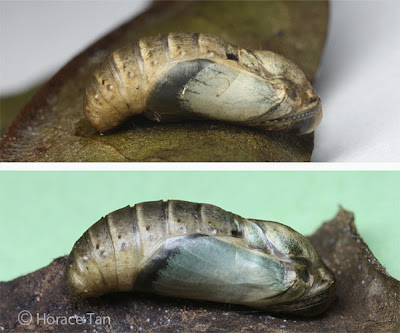 Mature pupae: Female (top); Male (bottom). Note the difference in the extent of the
bluish patches in the wing pads. 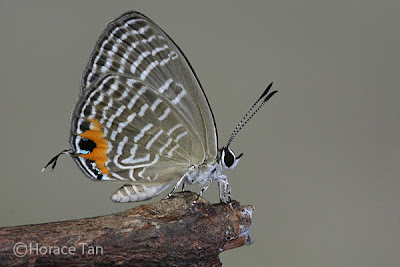 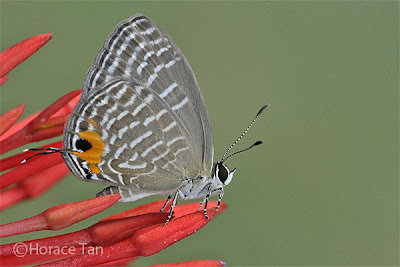