Life History of the Branded Imperial 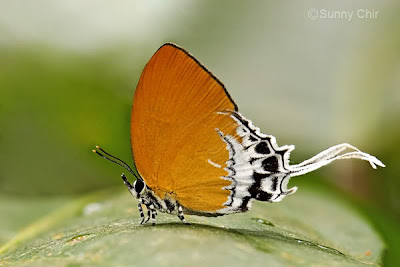 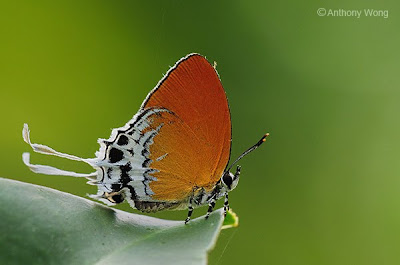 A Branded Imperial taking a break on a leaf perch. 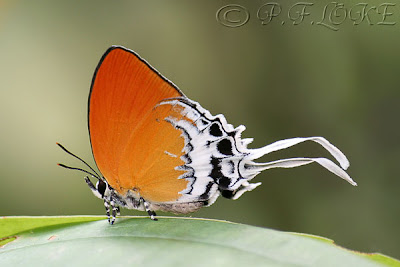 Another Branded Imperial on a leaf perch.

Physical Description of Adult Butterfly:
Above, both sexes are dark brown, with black confluent spots on the white tornal patch on the hindwing. In the male, the dorsal area on the forewing and the tornal area of the hindwing are lightly dusted in blue, and there is a dark circular brand around the origins of spaces 2, 3 and 4. Underneath, the wings are mainly reddish orange. The forewing is unmarked and the hindwing has large black submarginal spots on the white tornal area which is separated from the orange area with an irregular border outlined with black striae. Each hindwing is toothed at the end of veins 1b and 3, and has a long white tail at the end of vein 2. 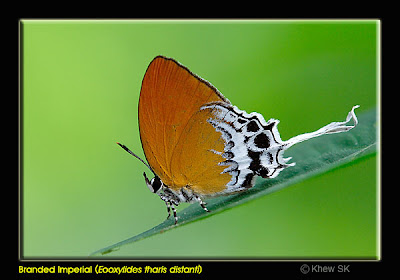 Field Observations of Butterfly Behaviour:
This species is rather common in Singapore, and the adults can be readily found in the Central Catchment Reserve, Bukit Timah Nature Reserve, western wastelands and Southern Ridges. Adults can be sighted rather frequently along forest paths, forest fringe or gaps, \with the adults sunbathing or flitting from perch to perch in the vicinity of its host plant. At times, adult butterflies can be observed to feed on plant sap at the caterpillar's feeding damage site on the Smilax shoot. 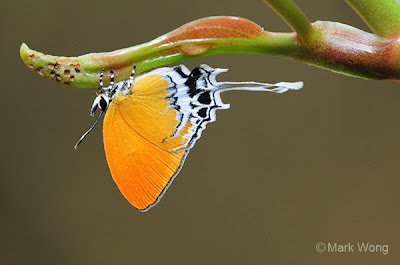 A Branded Imperial licking sap from a Smilax shoot where feeding damage has been made. 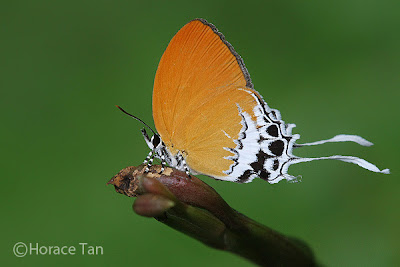 Another sap-licking Branded Imperial adult on a Smilax shoot.

Early Stages:
The Branded Imperial shares the same host plant, Smilax bracteata, with the Yamfly (Loxura atymnus fuconius). The caterpillars of both species feed on the young tender shoots of this woody climber, but for some unknown reason, Branded Imperial is the more common of the two species locally. The host plant is a woody climber with long, coiling stipular tendrils and long, stout stems which are covered with bristles and stiff prickles. It has a wide distribution in Singapore and its occurrence is typically accompanied by the presence of a population of the Branded Imperial. 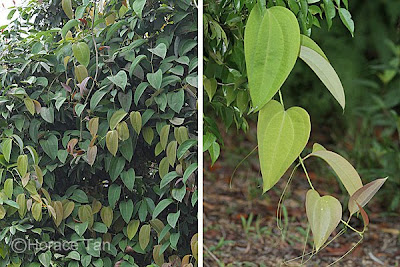 Host plant : Smilax bracteata. Left: far view with the plant growing over another plant species.
Right: near view of leaves at a relatively young shoot. A Young and fleshy shoot of Smilax bracteata. 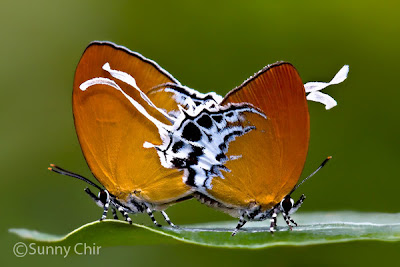 A mating pair of the Branded Imperial.

Eggs are laid singly on the young shoots of the host plant. It is common for a number of eggs to be found on the same shoot. Each egg is white, hemispherical and has an elevated large ring atop surrounding a small and depressed micropyle. The surface is covered with many tiny pits which are barely visible to the naked eyes. Each egg has a basal diameter of about 1mm and a height of about 0.6mm. 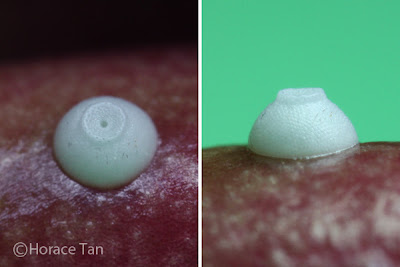 Two views of an egg of the Branded Imperial.

It takes 3 days for the egg to hatch. The young caterpillar consumes the upper portion of the egg shell to emerge. With a length of 1.5-1.6mm, it has a yellowish head, long dorso-lateral setae on the mesothorax and the 7th abdominal segment and long lateral setae along the fringe of the body. The caterpillar feeds by scraping the external layer of the fleshy young shoot in all instars. It is initially whitish but turn yellowish after a few feeds. 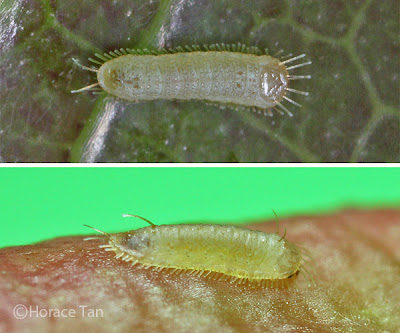 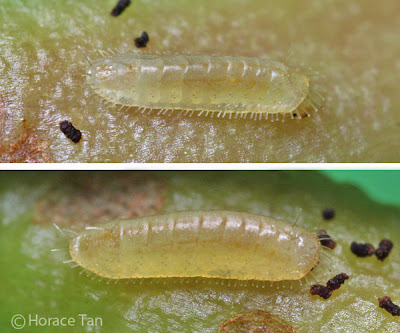 The 2nd instar caterpillar does not have the long dorso-lateral setae on the mesothorax and the 7th abdominal segment as in the first instar. The body appears smooth to the naked eyes but its surface is actually covered with many tiny pits with minute setae emanating from each of them. The lateral setae lining the fringe of the body are also proportionately shorter than in the 1st inar. The body colour is yellowish with varying extent of pink to red shading. This instar lasts for 2.5-3 days and reaches a length of about 5.5mm. 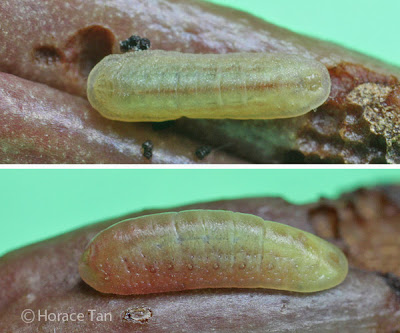 The 3rd instar caterpillar looks similar to the 2nd instar caterpillar but with a humpbacked thorax. The body colour varies from ochreous yellow to deep red. The dorsal nectary organ (DNO) on the 7th abdominal segment and the tentacular organs (TOs) on the 8th abdominal (just behind the last pair of spiracles) are now discernible. The body length reaches up to 11mm in this instar which lasts about 3-3.5 days. 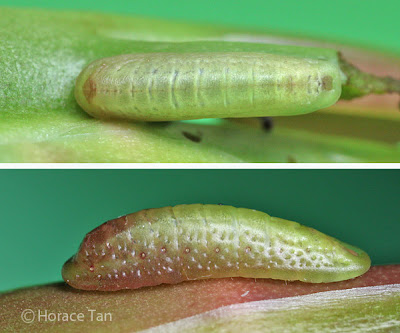 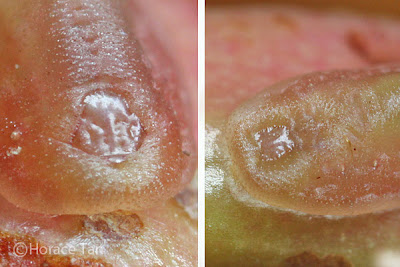 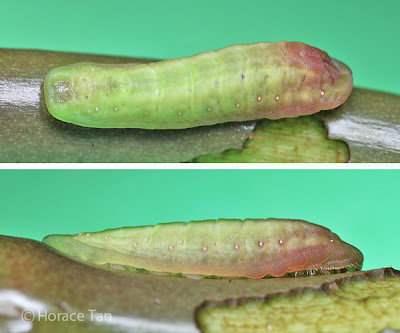 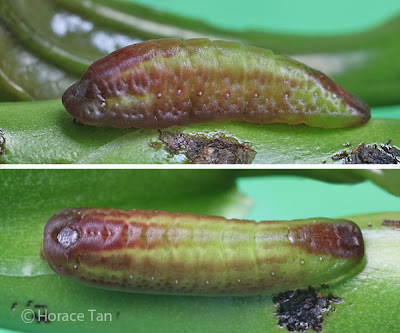 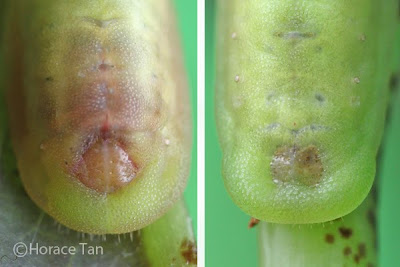 The 4th (and final) instar lasts 5-6 days and the body reaches a length of about 17-18mm. In the last day of this stage, the caterpillar ceases feeding, and its body shrinks in length. It wanders along the stem or branch of the host plant and finally comes to rest on a chosen spot. Here the caterpillar prepares for pupation by spinning a silk pad and a silk girdle to secure itself. It then becomes immobile in this pre-pupatory state for about 1 day. 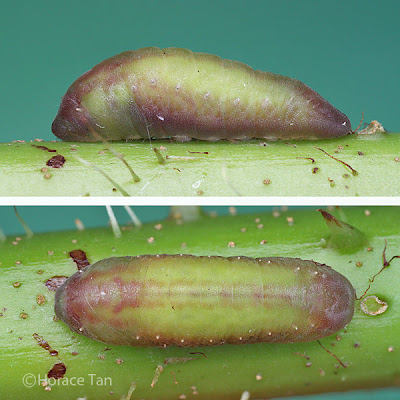 Two views of a pre-pupa of the Branded Imperial

The next day the pupation takes place (see video clip below). The pupa is held via its cremaster and a silk girdle to the silk pad on the substrate. It is green in ground colour. Dark spots of variable sizes are featured on dorsum of the abdomen. The wing case is dark brown to black with varying number of whitish streaks/patches. Spiracules are yellow and prominent, especially the ones on the prothorax. Length: 11-13mm.
A video clip showing the pupation event of a Branded Imperial caterpillar. 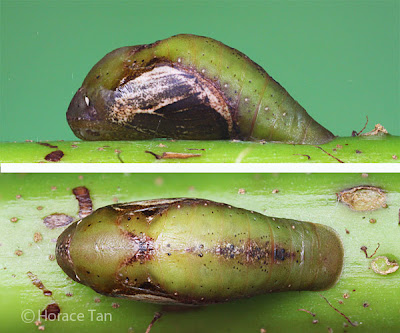 Two views of a fresh pupa of the Branded Imperial

Nine days later, the pupa becomes darkened in color signaling the imminent emergence of the adult. The next day the adult butterfly emerges from the mature pupa. 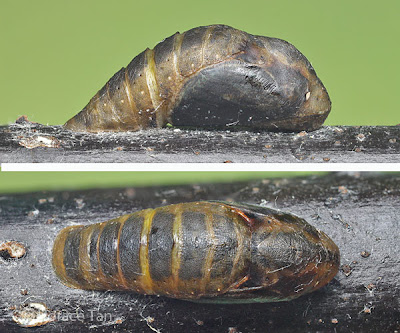 Two views of a mature pupa of the Branded Imperial. 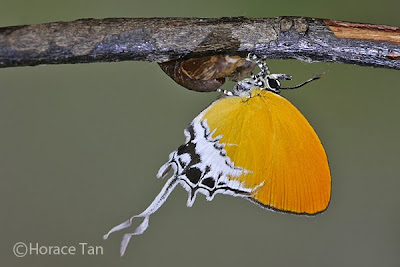 Both the 3rd and 4th instar Branded Imperial caterpillars are truly myrmecophilous (live in association with ants) with their nectary organs attracting ants of various species to tend to them. 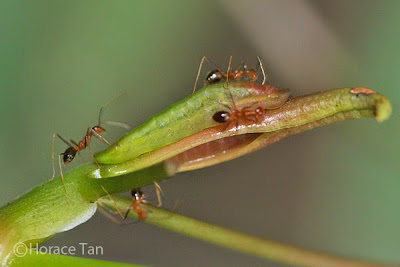 A final instar caterpillar of the Branded Imperial being attended by ants. 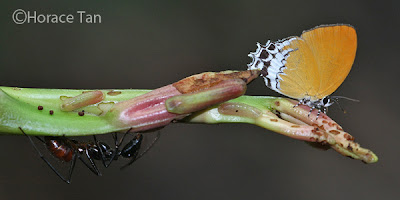 Branded Imperial caterpillars (how many can you spot?) receiving the attention of a giant ant (Camponotus gigas) on a young Smilax shoot. The adult butterfly is taking plant sap from the damaged part of the young shot.

In addition to DNO and TOs, the Branded Imperial caterpillars also possess a number of hair-derived glands, called pore cupola organs (PCOs), which are involved in myrmecophily. Ants have been observed to "lick" secretions from the DNO, and "harvesting" secretions from PCOs on various parts of the larval body. 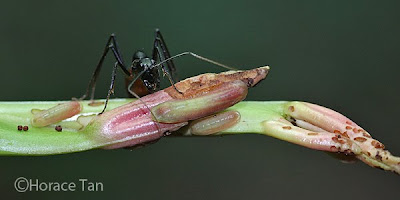 Another shot of Branded Imperial caterpillars receiving the attention of the giant ant. 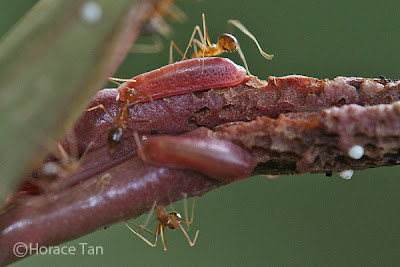