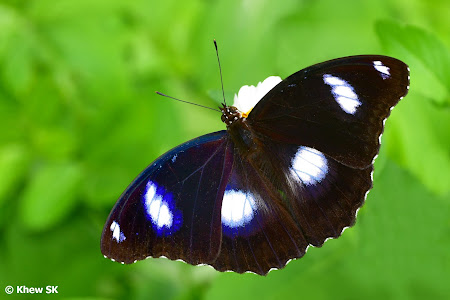 
The genus Hypolimnas is represented by three species in Singapore. Called by their curious English common name of "Eggfly", it would be interesting to find out how this common name was coined by the early collectors in the region. A quick search on the internet offers one possible suggestion - that the name refers to the white egg-shaped circles on the wings of the males of the species. 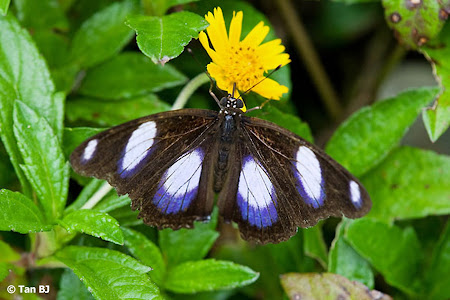 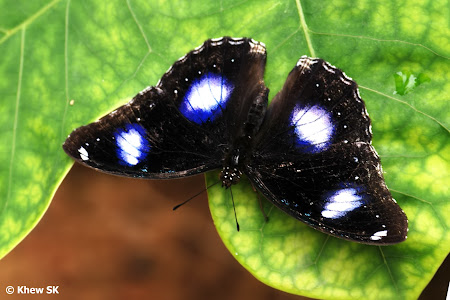 
The species of this genus are known to be highly variable and even amongst some of the named forms, there is a wide range of intermediates across the individuals. Of the three species, two are relatively common and widely distributed across different habitats in Singapore, whilst one is very rare and, thus far, only makes its appearance, at the Southern Ridges Parks. Each of the species has unique characteristics and behaviour, and this will be discussed below. 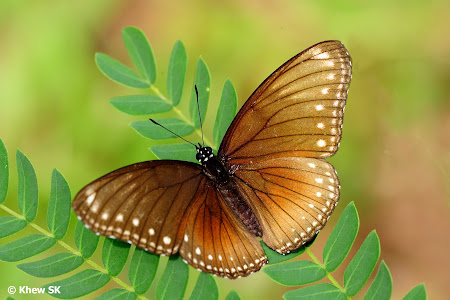 The Malayan Eggfly can be considered common, although usually encountered singly and is widely distributed in Singapore across various habitats. It is often mistaken for one of the Danainae "Crows" of the Euploea genus. However its flight characteristics and habit of returning to its favourite perch after being disturbed, would give a clue as to its identity. 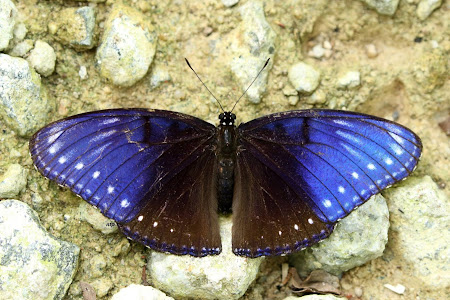 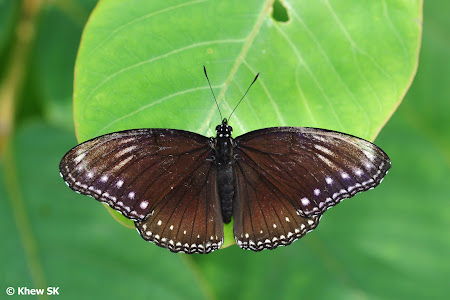 A typical form-anomala with all-brown wings 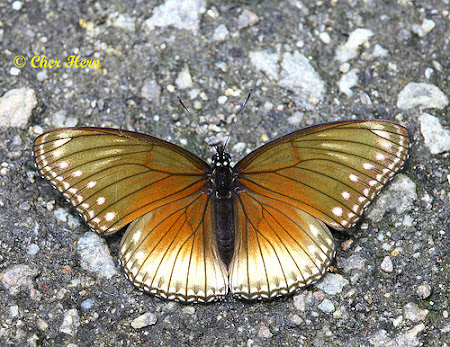 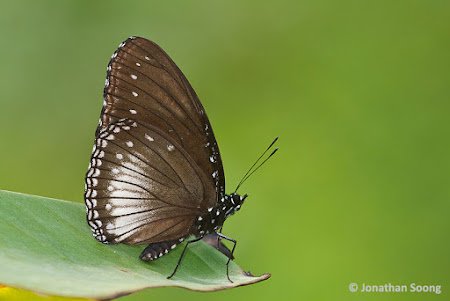 Malayan Eggfly form-nivas with broad white streaks on the hindwings 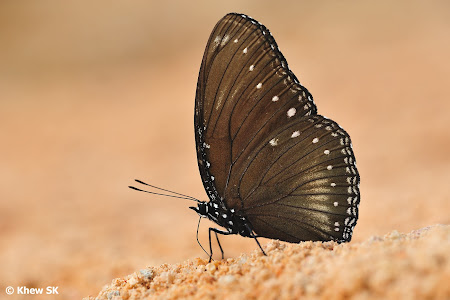 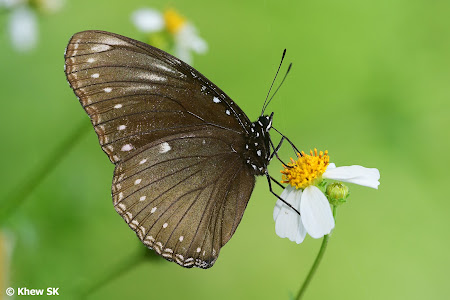 The Malayan Eggfly is dark reddish brown above, with a series of post-discal and sub-marginal white spots on both wings. The underside is darker and has similar markings as its upperside. The species is quite variable and there are two main forms flying in Singapore - the typical (and more common) form-anomala and the rarer form-nivas which has diffused white post-discal streaks on its hindwing. Occasionally, examples with a prominent blue gloss on the upperside of the forewings occur, which resembles the male Striped Blue Crow. 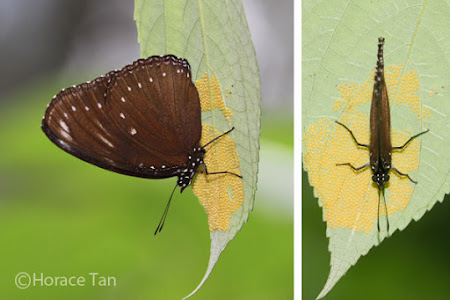 A female Malayan Eggfly stands guard over her clutch of eggs

One of the interesting observation of this species is that a female can lay in excess of a hundred eggs on a single leaf of its host plant. It is then observed to stand guard over the eggs until the end of her life. There was a report of a sighting of a dead female still standing guard over her eggs even after the caterpillars hatched and moved away - a very bizarre behaviour for a butterfly! 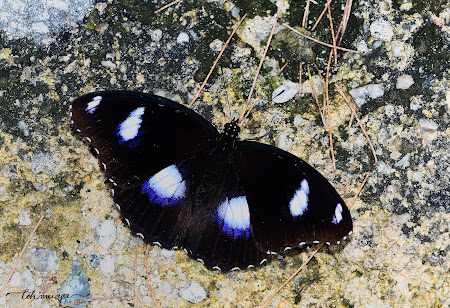 The species Hypolimnas bolina occurs in Singapore and Malaysia in two subspecies - the Great Eggfly (ssp bolina) and Jacintha Eggfly (ssp jacintha). The males of both subspecies look very much alike, except perhaps the underside hindwing submarginal white spots are very much reduced in ssp bolina but is wider and more distinct in ssp jacintha. Both subspecies are considered common and are widely distributed in Singapore. 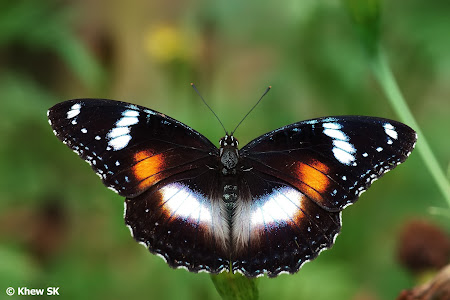 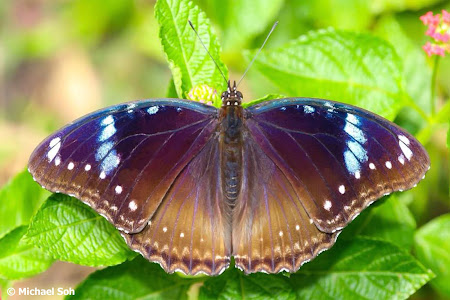 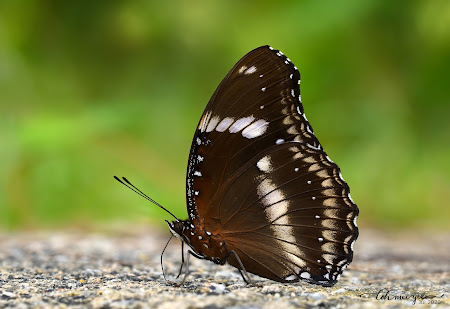 There are several named female forms of the Great Eggfly, of which the most typical form is nerina with its orange dorsal patch on the forewing above. However, the various forms are so variable and connected by a spectrum of intermediates, it is often difficult to classify the forms definitively from the physical attributes of the individuals. 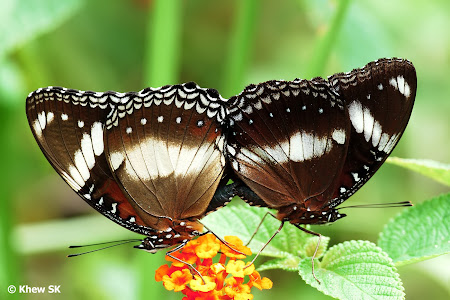 A mating pair of Great Eggfly, shot at Pulau Ubin in Singapore

From field observations, although the two subspecies are currently separated, it is stated in Butterflies of the Malay Peninsula 4th Edition that "from about 1970 onwards, subspecies jacintha has partially re-established itself, where it now interbreeds with subspecies bolina giving rise to adults showing a wide degree of intergradation, such that it is often not possible to assign specimens with one subspecies or the other." 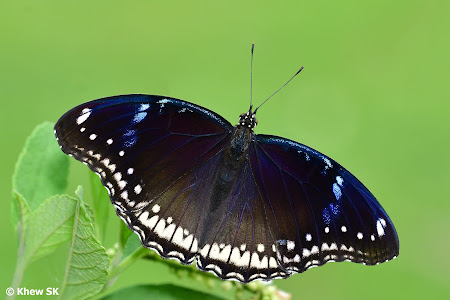 As mentioned above, the ssp jacintha has certain physical characteristics that was initially more distinctive where it could be separated from ssp bolina. The most diagnostic of which is the sub-marginal "M-shaped" white spots on the underside of the hindwing. In typical examples, these spots are larger and almost form a wide band on ssp jacintha whilst they are smaller and separated in ssp bolina. However, over the years, observations of individuals where these markings are somewhat in-between have occurred, making it difficult to decide which subspecies it is. 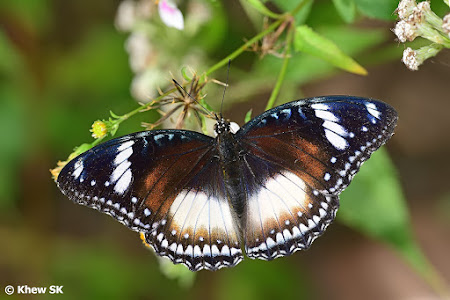 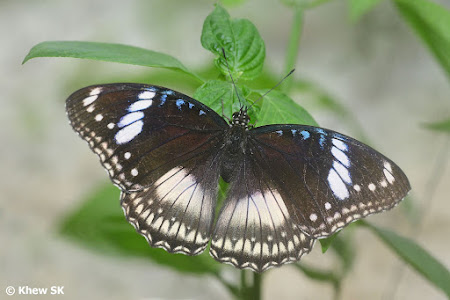 Whilst the male has a similar appearance to ssp bolina, there are new forms of ssp jacintha that appear from time to time. These new forms have generally not been described, or, with the interbreeding with ssp bolina, they may form further intermediate forms that are so highly variable that it is not even assigned a name due to the irregularities of occurrence. 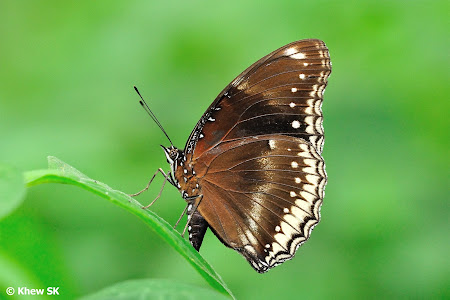 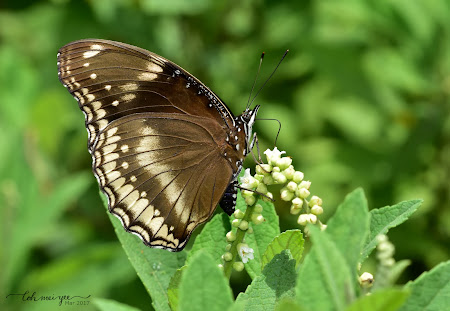 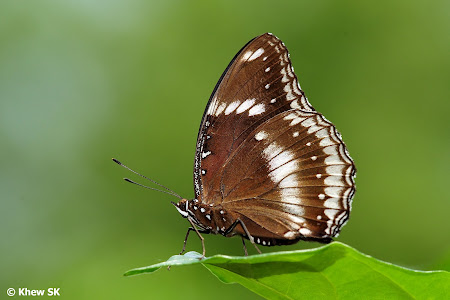 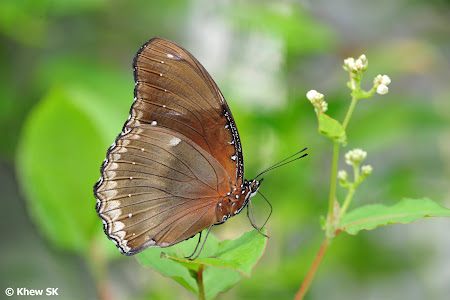 Further research and observations are certainly required of these two subspecies. Evolution of the species/subspecies is certainly still very much in progress, and it may be a matter of time before one or the other subspecies may disappear. Having the reputation of being "the most variable butterfly in the world", it will not be surprising if the evolution continues and more interesting surprises abound in the future. 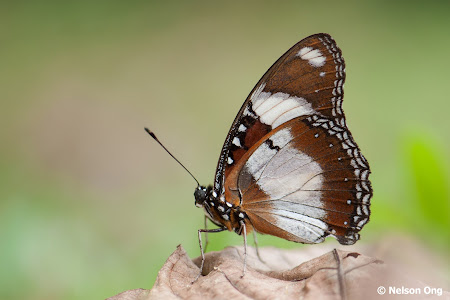 The last of the Eggfly species is the very rare Danaid Eggfly. Although listed as "extant" in Singapore by the early authors (and hence is a native species), sightings of this species have been far and few in between. Where it has been spotted over the past two decades, only males have been seen. And they usually appear for a few days at the Southern Ridges parks like Mt Faber and Telok Blangah Hill Park and totally disappear for many years. 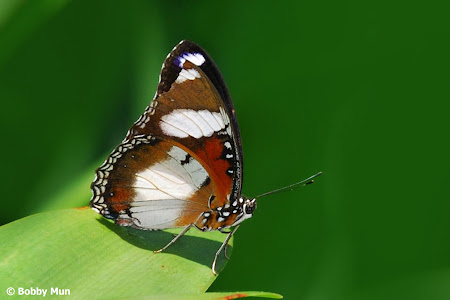 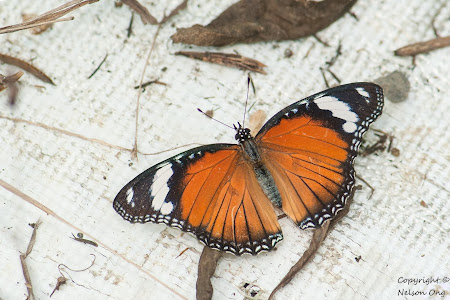 A female Danaid Eggfly shot in Taiwan.  It mimics the Plain Tiger for protection

The most interesting aspect of this species is the female, which is almost an exact replica of the Plain Tiger and flies like the Danainae. In the field, it is often wise to take a second look at anything that looks like the Plain Tiger as the female of the Danaid Eggfly has not been reliably seen nor photographed in Singapore yet.