The Nawabs of Singapore
Polyura species found in Singapore 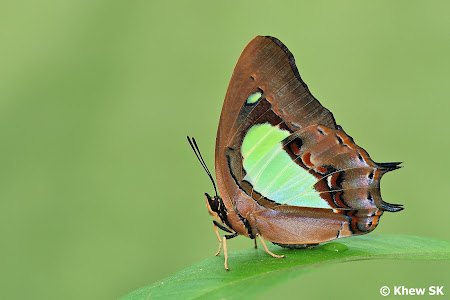 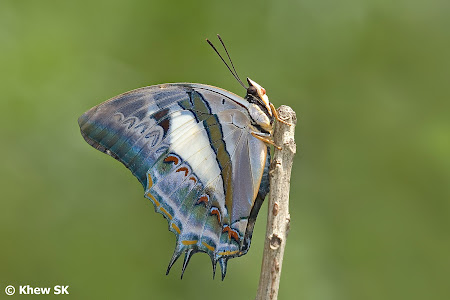 Of these two, the Plain Nawab was the commoner, but caterpillars of both species turned up quite regularly on various host plants that these species were known to feed on. Both the Plain and Blue Nawabs are widely distributed across the island and have been observed in urban parks and gardens like the Singapore Botanic Gardens, Southern Ridges parks, Tampines Eco Green, just to name a few, and also at forested nature reserves and even at back-mangrove/mangrove habitats like at Pulau Ubin, Pasir Ris Park and Sg Buloh Wetland Reserve. 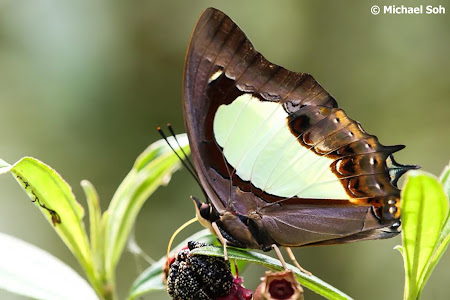 
Some time between 2012 and 2014, sightings of the 3rd Nawab, the Malayan Nawab, were reported from Pulau Ubin. Several more regular sightings of the species confirmed that this "lost" species had been re-discovered in Singapore once again. However, the 4th species, the Common Nawab, has not been recorded in Singapore for a long time. We now take a look at the 3 remaining Nawab species left in Singapore.
1) The Plain Nawab (Polyura hebe plautus) 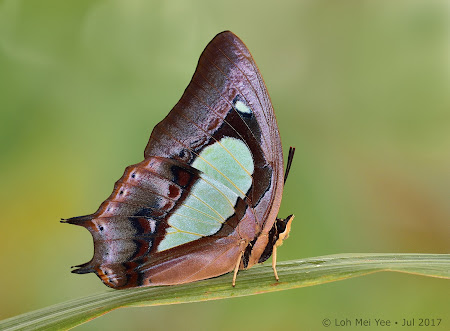 The Plain Nawab is the most regularly seen of the three species in Singapore. It is widely distributed across the island and is present in urban parks and gardens as well as in the forested nature reserves and in mangrove habitats as well. Although the adult butterfly is seen regularly, its caterpillars are also as often spotted on the Red Saga (Adenanthera pavonina) its preferred host plant. 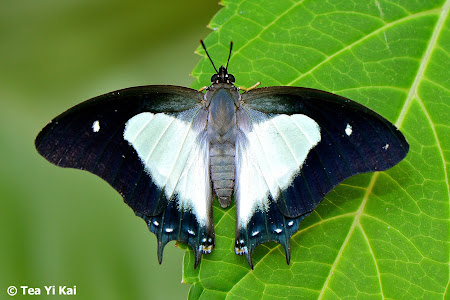 The Plain Nawab has a greenish upperside with a broad black border on both wings. The underside has a large pale silver-green median patch which is usually limited to about a quarter or third of the wings. The butterfly is robust-bodied and has a strong flight.
2) The Blue Nawab (Polyura schreiber tisamenus) 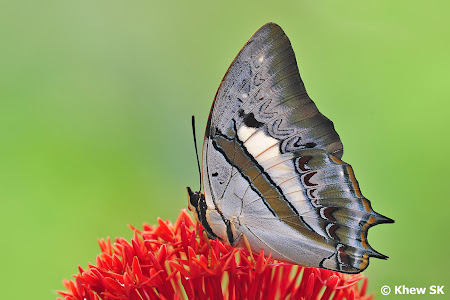 The Blue Nawab flies as rapidly as the Plain Nawab and is skittish. Unless encountered whilst feeding on overripe fruits or tree sap, this species is swift on the wing and is hard to photograph. However, like the Plain Nawab, this species' caterpillars are occasionally spotted, also on the Red Saga. The species uses several host plants for its caterpillars. 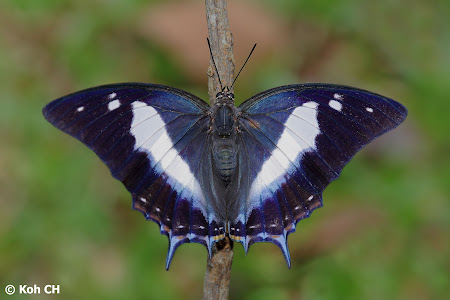 The Blue Nawab has a silvery underside marked with attractive brown and purple patterns. The upperside has a white median band that stretches across both wings. Like many of the other Polyura species, it has a pair of thick pointed tails on the hindwings. The Blue Nawab is the largest of the three species in Singapore, and the female has a wingspan that sometimes exceed 90mm.
3) The Malayan Nawab (Polyura moori moori) 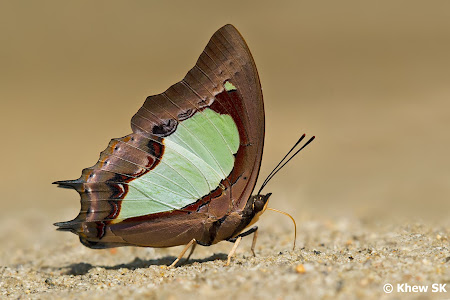 The last of the three extant Polyura species in Singapore, the Malayan Nawab was a recent re-discovery. Sightings of it are mainly on Pulau Ubin, where it was sighted and photographed in 2018 and 2019. Several of the photographed individuals were either feeding on the fruits of the Singapore Rhododendron (Melastoma malabathricum) or on tree sap. Another robust and swift flyer, it is not easy to photograph when it is alert and in flight. 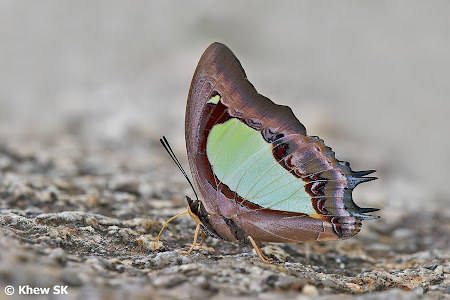 The Malayan Nawab's forewing black margin on the upperside does not decrease markedly towards the tornal area. The hindwing pale green patch is more extensive than the Plain Nawab and usually covers about half the wing. The discal patch on the underside of the forewing is markedly indented at the area just opposite the sub-apical spot in space 5.
Text by Khew SK : Photos by Khew SK, Koh CH, Loh MY, Michael Soh and Tea Yi Kai

Posted by Commander at 9:36 PM 0 comments