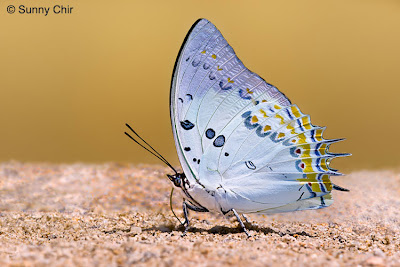 After a fruitful butterfly-shooting outing last year at Fraser's Hill, my wife and I decided to organise another trip up the famous Malaysian Hill resort. This time, we sought out my sister-in-law's assistance to book her company bungalow again. As booking was based on a balloting system, we hoped for the best, and were rewarded with an off-peak allocation of the Maybank Lodge from Tuesday to Friday. 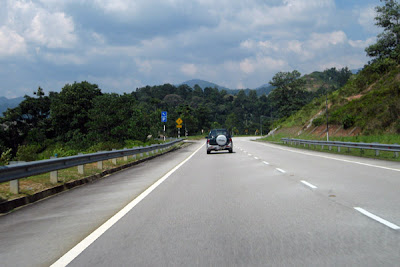 Gathering the group from ButterflyCircle, the 9 of us drove up in three cars, this time with much less fuss, but still depending on our trusty GPS navigator part of the way. After a pit-stop at Pagoh for a coffee break, we zoomed all the way up the N-S Highway, and exited towards the bypass, heading north, avoiding the usually congested roads leading to Kuala Lumpur, the capital city of Malaysia. Lunch was at the small town of Rawang, and off we went towards Kuala Kubu Bahru, and the 45-odd kilometres of winding road up to the Gap and Fraser's Hill. 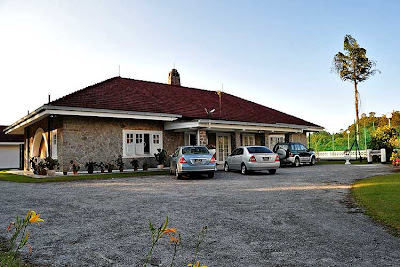 The majestic colonial Maybank Lodge that was home for 3 nights!

We made it to the MayBank Lodge at around 5:30pm, after waiting patiently at the one-way-up/one-way-down road to open for the upward time slot. After a quick briefing by the caretaker and settling in, we headed down to the town centre for dinner, and an evening of moth-shooting at the porch of the Lodge. 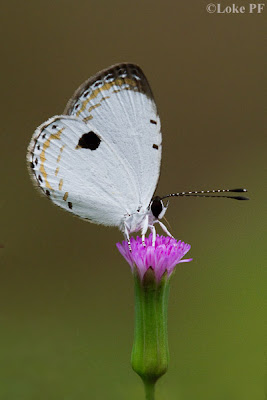 The next morning saw the group heading towards Jeriau Waterfalls, our first stop of the day. After laying our usual butt-attractants, we waited patiently for the butterflies to turn up. Unfortunately, the sun wasn't shining too strongly, and only a few customers visited. 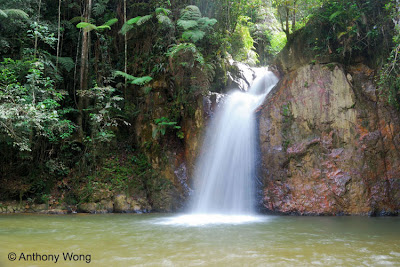 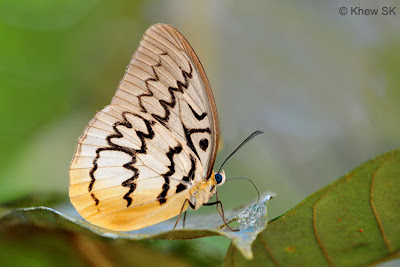 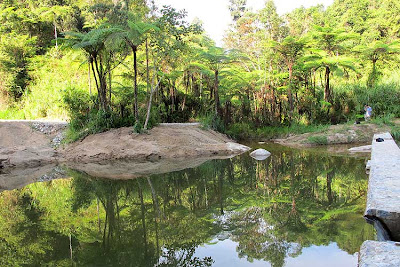 A newly constructed 'swimming pool' at the Jeriau Waterfalls
We decided to move off just after mid-day and drove towards the Telecom Loop on the eastern side of Fraser's Hill. Our Australian ButterflyCircle member, David Fisher had stayed at a facility at this location earlier this year, and had encountered quite a few butterflies around the paths. 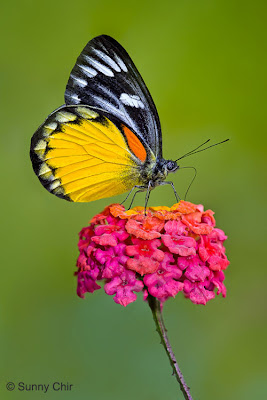 We stopped and saw quite a number of the Red Spot Jezebel (Delias descombesi eranthos) one of the signature Jezebels. However they were mostly uncooperative and stayed high up. A quick recce by Sunny Chir located a few Lantana bushes up the hill at the Government Resort and the group was in business shooting the hungry Jezebels. 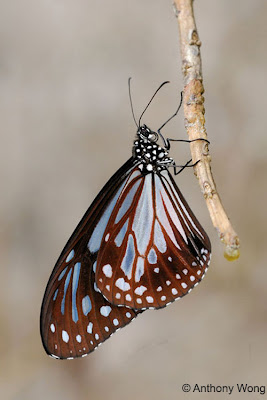 As the sun was shining brightly by 2pm, we decided to make another trip back to the Jeriau Waterfalls, and this time, we had slightly more butterflies showing up, but still not as plentiful as the trip last year. However, we managed to get some of the rarer species like the Indian Yellow Nawab, the Four Bar Swordtail and the Orchid Tit. 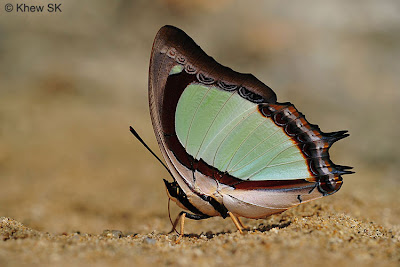 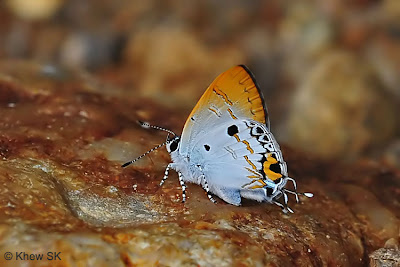 Back at the Lodge, and after quick wash up, the weather was cooling down to below 20degC and we got the barbecue fire started. Getting the fire going proved to be a challenge, but with so many willing hands, we managed to get a decent barbecue up and running. There was lots of food and everyone, including Anthony, who seemed to have a bottomless pit for a stomach, was happy and contented (at least for the next half and hour). 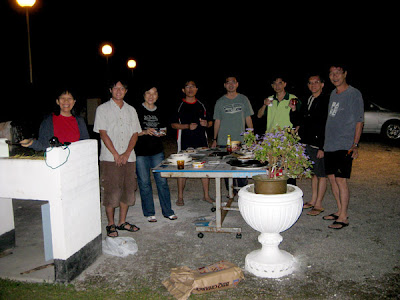 After dinner was a busy time for night macro, when the local moths showed up in numbers. Someone remarked that the group appeared to be shooting more species of moths than butterflies, and that we may have to change our group's name to MothCircle very soon! 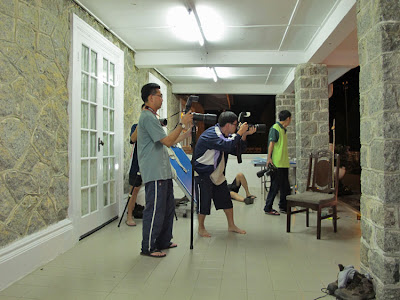 Members shooting moths at the porch of the Lodge

The next morning, the group was up early, and several members were out shooting the colourful and friendly bird life around the bungalow's grounds. The weather was mysteriously cool and we found out, to our dismay, that the rain clouds had covered most of the hill resort. 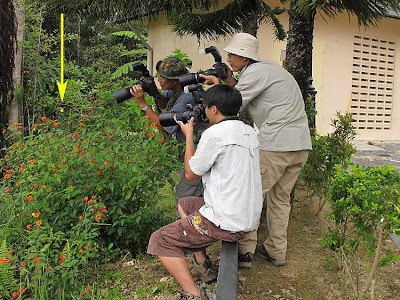 Members shooting a RedSpot Jezebel. The yellow arrow marks the spot where the butterfly landed

Most of the morning was spend pacing up and down although some members spend the time fruitfully by learning some new Photoshop tricks, courtesy of Sunny and Anthony. 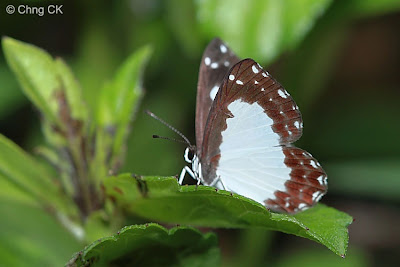 By mid-day, the skies were still overcast, but it appeared less likely to rain, so the intrepid group headed out to the Telecom Loop again, and back to the Lantana bushes for better shots of the Jezebels. After about an hour or two up the hill, with some members leaning precariously over the barrier to get at the Jezebels, most of us had our fill of the Jezebel and any other species that happened to fly to the hilltop to feed at the Lantana flowers, we headed to the Olde Smokehouse to make a reservation and order our dinner. Then it was back to the Lodge for a quick rest. 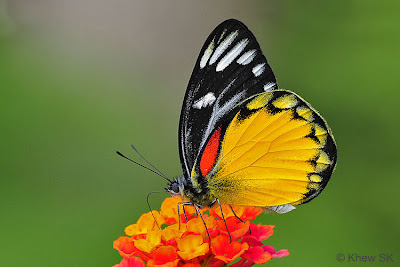 This was our final night and we decided to spend it in style, having a scrumptious English meal at the Olde Smokehouse. The icing on the cake was the dessert of Bombe Alaska and other sinful sweet stuff. Then it was back to the Lodge again, for an evening full of moth-shooting. 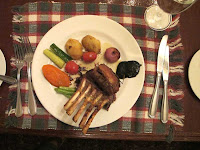 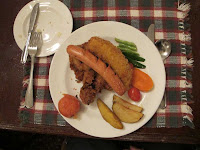 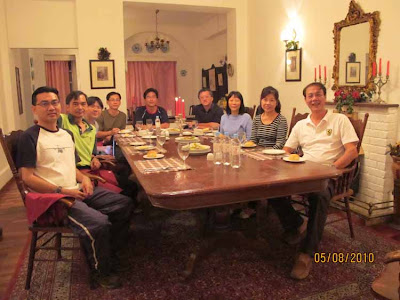 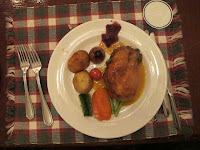 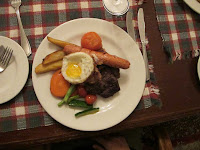 Dinner at the Olde Smokehouse and a sample of the western cuisine that we had. Yummy!

After a quick breakfast and finishing up all the remaining food, we headed out to the checkpoint to wait for the 10am downward schedule. 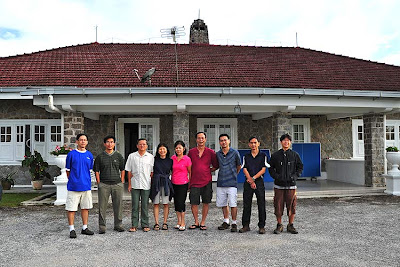 A Group shot in front of the Maybank Lodge for keepsake before leaving Fraser's Hill
The winding trip down was uneventful, and no one contributed his breakfast on the road along the way. 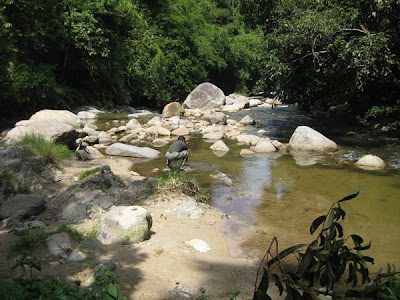 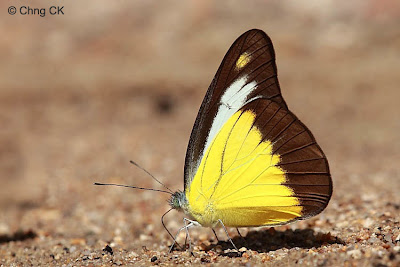 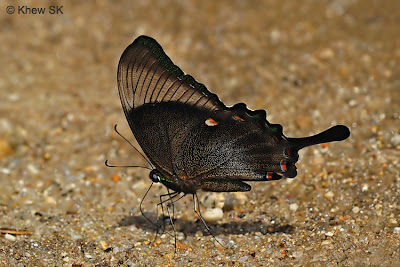 En route back to Kuala Kubu Bahru, we stopped at a river which was a designated picnic spot. For about an hour and a half, we were kept busy with the puddlers that came to visit. Amongst the rarer species shot were the Jewel Nawab, Great Orange Tip and Banded Peacock. 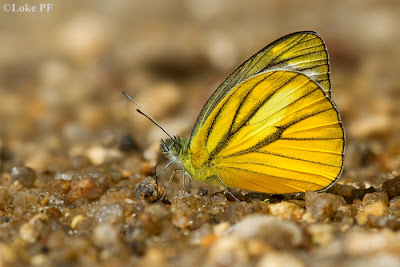 The Rajah Brooke's Birdwings that were puddling earlier were not cooperative, even though they persisted on flying around the group but never stopping for long. 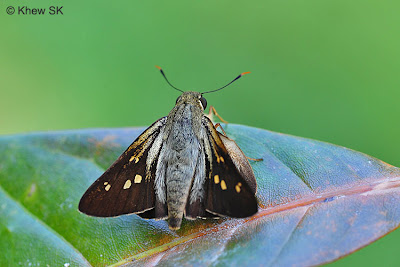 After a quick snack of sandwiches prepared by Irene and Shirley, the group bade farewell to the butterflies (most reluctantly) and headed to Rawang for lunch. Sunny and Irene went on to KL for a further three days, and the other two cars headed back to Singapore. After an eventful but tiring drive, the seven of us arrived back via Tuas Checkpoint around 7pm, tired but with happy memories of the four days of shooting and fun up on the fabulous Fraser's Hill.
I'm sure that if we managed to get an apartment or the lodge again next year, we would be having ButterflyCircle members clamouring for a spot to go up there again!
Text by Khew SK : Photos by Sunny Chir, Chng CK, Federick Ho, Khew SK, Loke PF, Tan BJ & Anthony Wong
Posted by Commander at 9:29 PM 3 comments