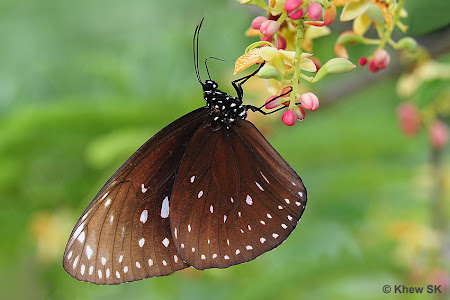 This "Crow" is the largest representative of its genus Euploea, which comprise butterflies that are predominantly black or blue with white streaks and spots. As the caterpillars of the species of this genus feed on mainly lactiferous plants which are known to be toxic, all the Euploea species are believed to be distasteful to predators. Hence collectively, the black/blue with white streaks/spots appearance of the "Crows" are considered to be a form of aposematic colouration display to warn predators of their distastefulness.


This King Crow was photographed at Pasir Ris Park Butterfly Garden. It is a "resident" species at the Pasir Ris Park Mangrove area, where its preferred caterpillar host plant, Cerbera odollam (Pong Pong Tree) grows in abundance. The butterflies are often spotted making forays to feed at the flowering plants at the nearby Butterfly Garden or when the Syzygium trees along the footpaths of the park bloom.
Posted by Commander at 12:00 PM 0 comments