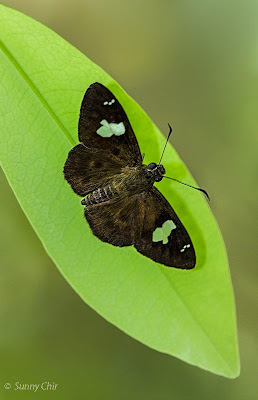 A colony of the White Banded Flat was re-discovered in Singapore by Nelson Ong and Yiming some time back in Feb 2011. Until then, it had been assumed that this species, recorded in the checklists of the early authors, was extinct. The surprising find ensured that the White Banded Flat would be re-instated to the Singapore Checklist once again.
Last week, ButterflyCircle member Sunny Chir shot the White Banded Flat at its very local hideout. We are glad to know that the colony still thrives and does not appear to be in danger of disappearing just yet. But its existence in the Singapore butterfly list remains highly threatened.
Posted by Commander at 8:00 AM 0 comments