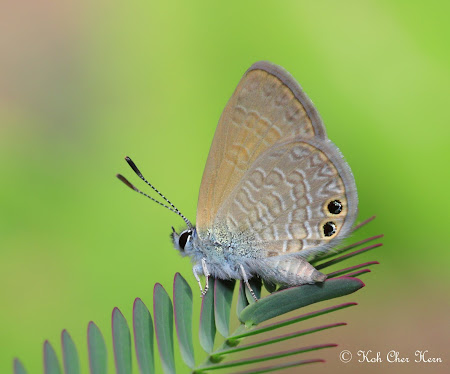 A Two Spotted Line Blue perches for a rest


In this 2nd part of our blogpost featuring the butterfly species with the name "Line Blue" in their names, we take a look at the remaining 4 species that have been recorded as new discoveries to Singapore. Under the IUCN definitions, these species are therefore "non-native" or "exotic" to Singapore. These Line Blue butterflies species are typically small in size, skittish and erratic flyers. 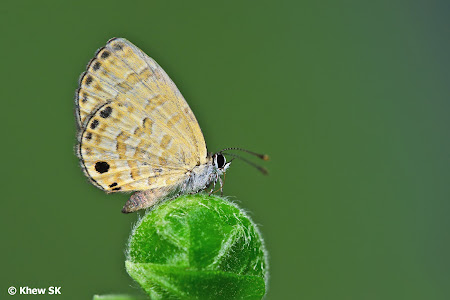 
Other than the Two Spotted Line Blue, which is common in Australia, the other "non-native" Line Blues can be found in neighbouring Malaysia. Although they were not recorded in the checklists of the early authors, there is always a likelihood that they may have been missed earlier and were extant in Singapore all this time. However, there is no way that this can be ascertained nor validated with certainty at this point in time, and these species are therefore treated as "exotics" unless other evidence surfaces to prove otherwise. 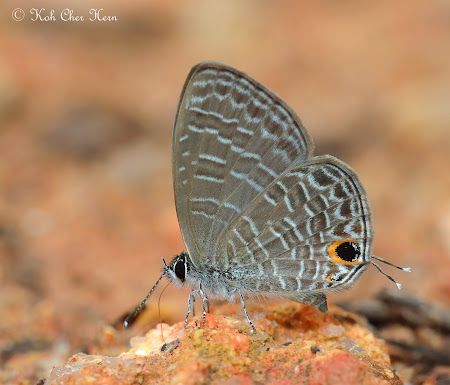 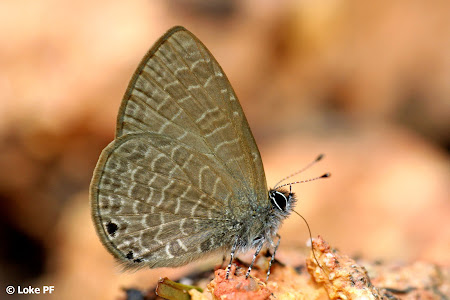 
Of the species featured here, two are from the genus Prosotas which complement the two native species already found in Singapore. The other is a sole representative of the genus Petralaea that can be found in the region. Whilst these 3 species may be able to fly over from nearby Malaysia, the aforementioned Australian species, the Two Spotted Line Blue probably came over to Singapore as a stowaway on plants that have been imported as part of landscaping material.
4. The Dingy Line Blue (Petralaea dana) 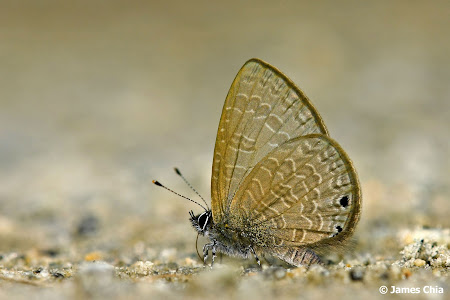 A Dingy Line Blue puddling.  Note the characteristic tornal spots without any orange crown/ring and absence of tails on the hindwing


The Dingy Line Blue was first discovered in 2004 on the offshore island of Pulau Ubin. It was recorded as a new discovery for Singapore. Since then, the species has been observed on the main island of Singapore and is relatively widespread in distribution. It has been recorded from the mangrove areas on Pulau Ubin, to the urban hill park at Telok Blangah, and also in the heart of the Central Catchment Nature Reserve. 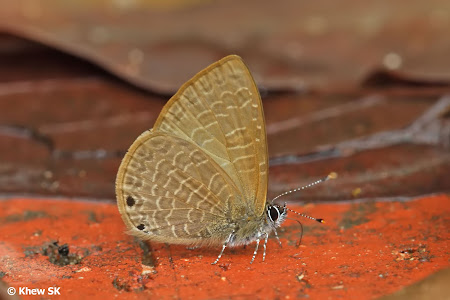 
It is a skittish butterfly and flies erratically. It is more often observed when puddling at muddy footpaths and streambanks. With an average wingspan of 24-26mm, it is difficult to identify this species in flight, unless it stops to feed or rest. 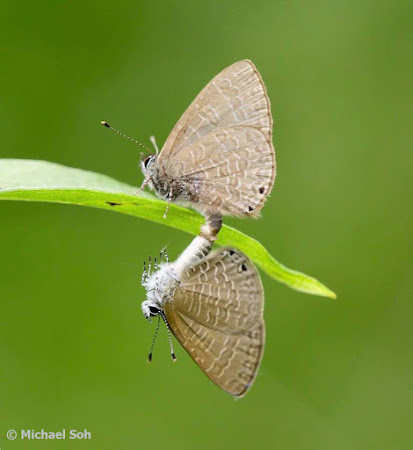 
The upperside of the male is a pale violet blue with narrow black margins, whilst the female is brown with a whitish patch on the forewing and metallic blue scaling at the wing bases of both wings. The underside is greyish brown and has pale white striations. There are two black spots on the underside of the tornal area of the hindwings. The species can be easily separated from its related lookalikes in that the tornal spots are not orange-crowned.
5. The Two Spotted Line Blue (Nacaduba biocellata) 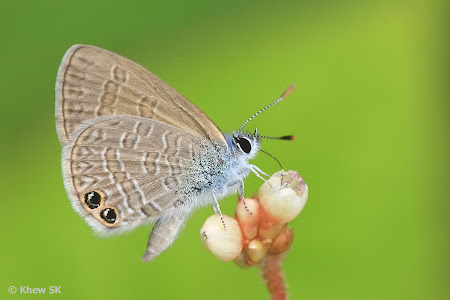 A Two Spotted Line Blue feeding at a flower


The Two Spotted Line Blue was another new discovery for Singapore when the species was formally recorded in the Singapore Checklist in 2008. There were a few unconfirmed sightings of this species earlier, but could not be validated. It is widely distributed and can be found on the main island of Singapore, as well the offshore islands of Pulau Ubin and Pulau Semakau. The species is usually found in urban parks and gardens and is seasonal. When it occurs, many individuals are encountered, to the extent of being temporarily abundant. They then disappear as mysteriously as they appeared, until the next seasonal outbreak. 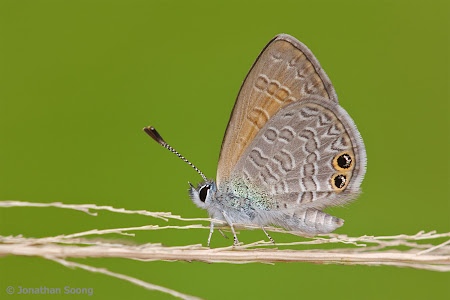 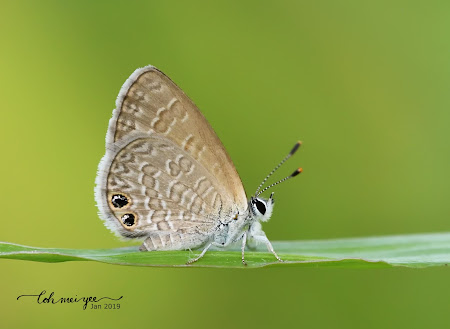 
The species occurs in the South Pacific, and is common throughout Australia where it is a native species. Being a small butterfly with an average wingspan of 22-26mm, it is highly unlikely that it managed to migrate to Singapore on its own steam. Its caterpillar host plant is the invasive Australian Wattle (Acacia auriculiformis) and its life history has been recorded here. 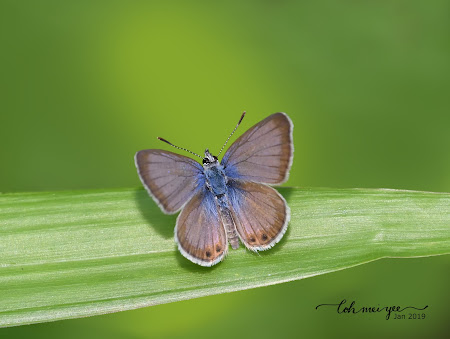 
The males are blue on top, with diffused black margins on both wings. The females are a drab brown and unmarked. The underside is a pale brown with dark wavy striations across both wings. Both sexes have a pair of orange-ringed black eyespots at the tornal area, with light greenish iridescent scales within each eyespot.  These two eyespots are probably unique enough to give the species its English common name.
6. The Banded Line Blue (Prosotas lutea sivoka) 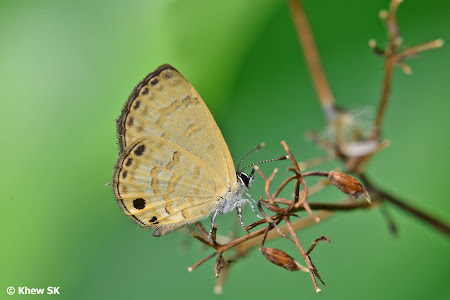 A Banded Line Blue perched to rest amongst some dead twigs


The Banded Line Blue was added to the Singapore Butterfly checklist in 2012 as a new discovery. A small colony was observed at the Bukit Brown Cemetery during a survey of the biodiversity in the area. The cemetery was slated for the development of a major arterial highway and parts of the land would be cleared for the road expansion. Interestingly, this small butterfly with an average wingspan of 22-24mm has eluded observation until recently. Also as interesting is that its caterpillar host plant, Acacia concinna is considered critically endangered, although several plants were found at the locality where the butterfly was observed. 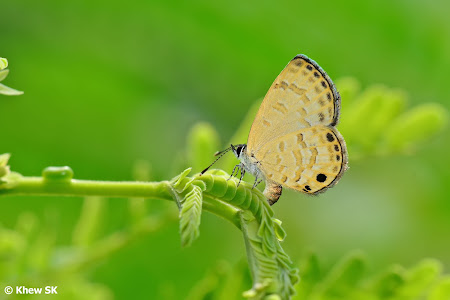 
The species flies erratically, almost reminiscent of the flight characteristics of its native cousins, the Tailless Line Blue and the Common Line Blue. It can fly restlessly for long periods of time, unless stopping to feed on flowers or to rest. It has also been observed to puddle at damp muddy footpaths. 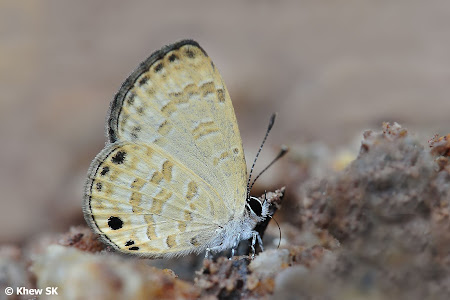 A Banded Line Blue puddling along a muddy footpath


The upperside of the Banded Line Blue is brown and unmarked. The underside is a distinctively pale yellowish-brown with diffused darker striations across both wings.  There is a prominent marginal black spot at space 6 at the apical area of the hindwing. The tornal area has two small black spots and a larger sub-marginal one at space 2 of the hindwing. The species has no tails. The complete life history of the species has been recorded in Singapore and can be found on this blog here.
7. The Barred Line Blue (Prosotas aluta nanda) 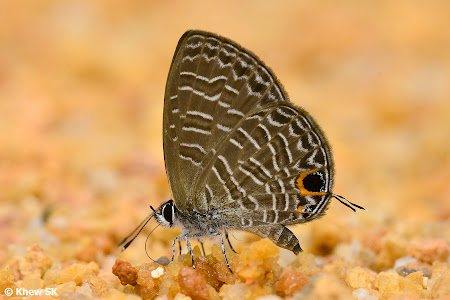 
The Barred Line Blue has many lookalikes in related genera like the Nacaduba, Ionolyce and Jamides. It may be why this species has eluded observers and the early authors. Only after close observations and validation that this species was added to the Singapore Butterfly checklist in 2014. However, upon scrutiny of earlier photographic records, it was already photographed, but incorrectly identified, from as early as 2008. 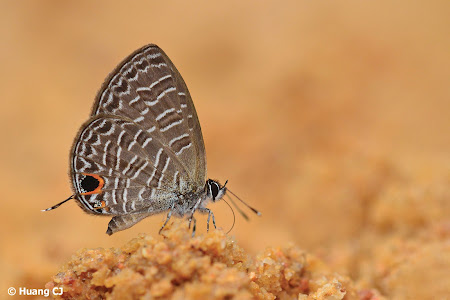 Where it has been observed, it has most often been encountered whilst puddling at sandy streambanks within the forested nature reserves. It is unlikely that this species can be found in urban parks and gardens, and is a forest-dependent species in Singapore. It is skittish in flight, not unlike the Nacaduba species, but can easily be approached when it is puddling. 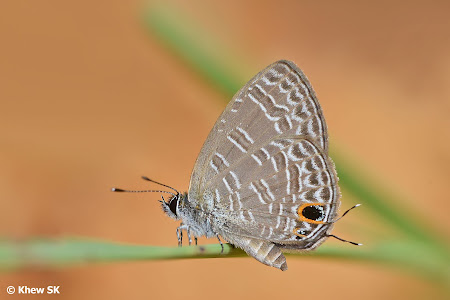 A Barred Line Blue perched on a blade of grass


The male is blue on the upperside, whilst the female is brown with a bluish-green patch on the forewing. The key diagnostic feature of the Barred Line Blue is the post-discal striation in space 3 on the underside of the forewing. This striae is shifted slightly towards the base of the forewing as compared to the adjacent striae in space 4. The hindwing has a white-tipped black filamentous tail at vein 2 and there is a large orange-crowned black eyespot at the tornal area of the hindwing. The early stages of this species is currently unknown.
Text by Khew SK : Photos by James Chia, Huang CJ, Khew SK, Koh CH, Loh MY, Loke PF, Michael Soh and Jonathan Soong

Posted by Commander at 8:14 PM 0 comments