Life History of the Banded Lineblue 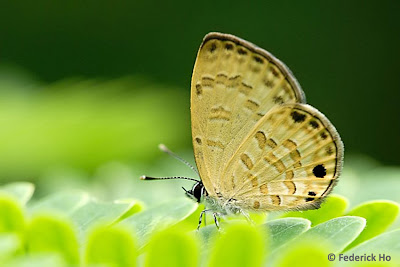 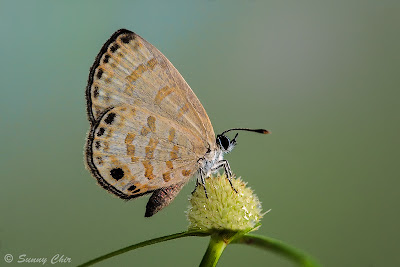 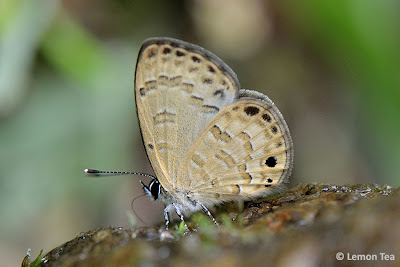 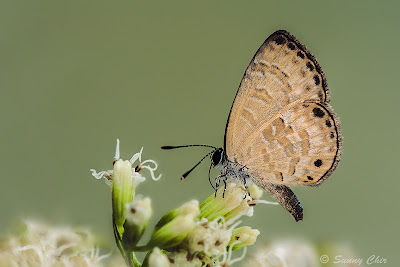 A Banded Lineblue visiting a flower of Mile-a-minute. 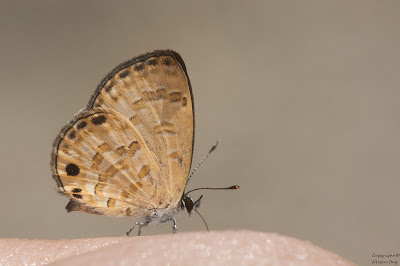 This tiny species was recently discovered in Singapore (see this BC blog article for details). Sightings of  adults have typically been in the vicinity of its local host plant, either visiting flowers on nearby flowering shrubs/herbs or puddling on wet ground. In flight, they can easily be mistaken as other similarly-sized Lineblues. A definite identification can only be made when the butterfly perches briefly and allows its trademark hindwing marginal spot in space 6 to be observed. 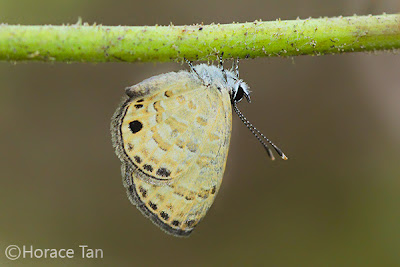 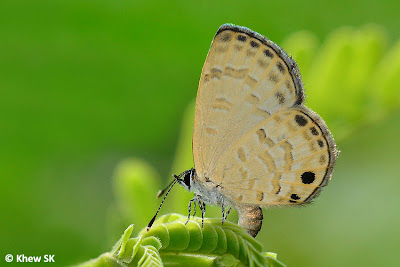 The only known local host plant for the recently discovered Banded Lineblue is Acacia concinna (soap pod), which itself is also recently re-discovered as a result of the effort to identify the host plant.  The plant had previously  been listed as presumed extinct locally in the flora checklist for Singapore.  The caterpillars of the Banded Lineblue feed on the young and tender leaves of A. concinna. As the cluster of A. concinna is not flowering in the short observation period available up to now, we are not able to tell whether the caterpillars also use the flower buds as a food source. 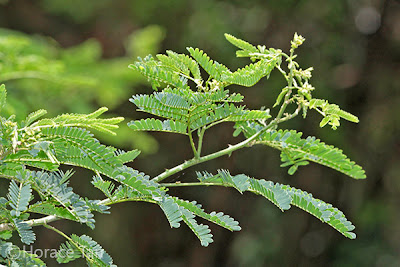 
Eggs of Banded Lineblue are laid singly on a leaf bud or young shoot of the host plant. Unlike its cousins, Prosotas nora (Comon Lineblue) and Prosotas dubiosa (Tailless Lineblue), the egg of the Banded Lineble is not encased in a coat of gelatinous material.  Each egg is disc-like (about 0.4mm in diameter) with a depressed micropylar at the centre of the exposed top.The surface is covered with a reticulated pattern of intersecting shallow ridges and  pits. When freshly laid, the egg is pale green. The color turns to white as the egg matures. 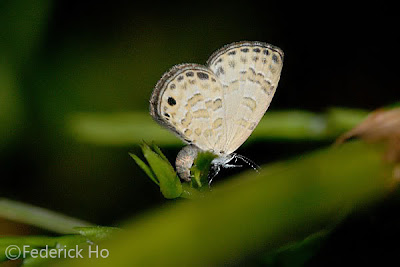 A female Banded Lineblue laying an egg on the host plant. 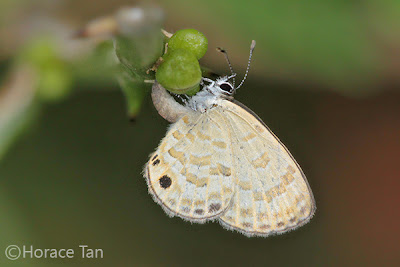 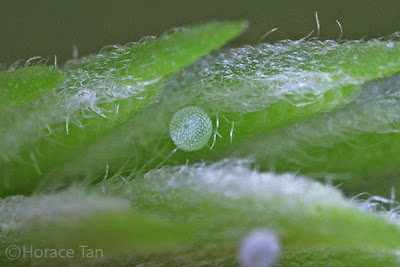 A fresh egg (at the center of the pic) laid on a young shoot of the Banded Lineblue. 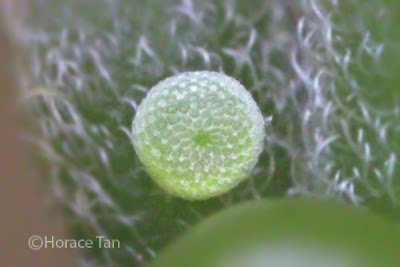 A close-up view of an egg of the Banded Lineblue. Diameter: 0.4mm.


Each egg takes 2-2.5 days to hatch. The young caterpillar emerges after nibbling away sufficiently large portion of the egg shell. The remnant of the egg shell is not eaten by the newly hatched. Measured at a length of about 0.7mm to 0.8mm, its pale yellowish body sports two rows of long dorso-lateral setae, and moderately long lateral setae. The head capsule is black in color. 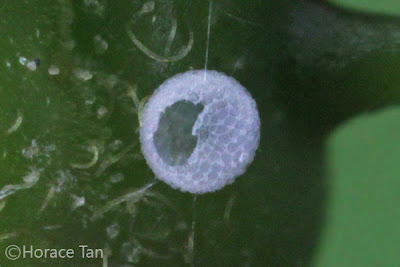 An empty egg shell of the Banded Lineblue. 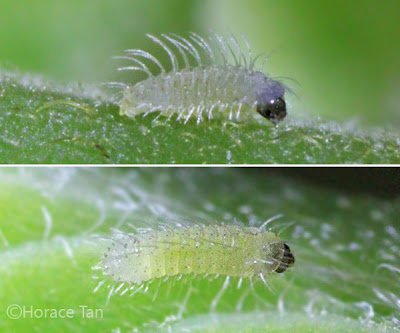 
The newly hatched feeds on the leaf lamina of tiny leaflets in the young shoot, making small holes on the leaflet surface as a result. The body takes on a green undertone as a result of the leaf diet. After about 2-2.5 days of growth and reaching about 1.8mm in length, the caterpillar moults to its next instar. 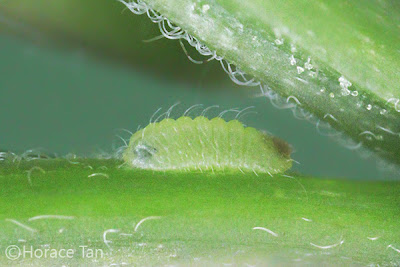 A late 1st instar caterpillar stays dormant on the rachis of the resident leaf prior to its moult to the next instar.


The 2nd instar caterpillar still has distinct dorso-lateral and sub-spiracular setae, but these are much shorter in proportion to its body length. In addition, there are numerous minute setae covering its body surface. The body base colour is yellowish green, and the head capsule has changed to the same coloration. Dorsally, from the 2nd thoracic segment onwards, the body features a hump which is wider at the anterior segments. The bottom rim of the body segments takes on a lighter shade of yellowish green as growth progresses. The dorsal nectary organ is barely distinguishable at this stage. The growth in this stage brings the caterpillar to a length of about 3mm, and after about 2-2.5 days in this stage, it moults again. 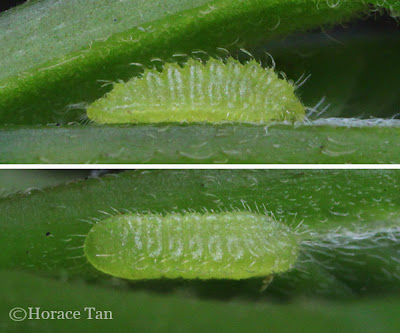 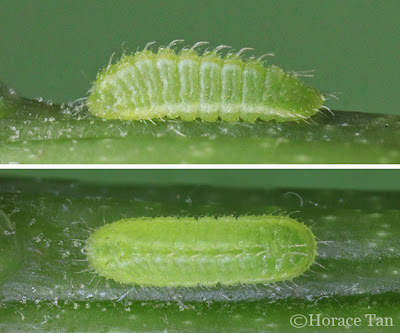 
The 3rd instar caterpillar does not have the two rows of distinct dorso-lateral setae as in the previous two instars. The sub-spiracular setae are still present but rather short. There are numerous short setae covering the body, more so than in the 2nd instar. The dorsal hump is now marked with paler yellowish green along its outer edges. Both the dorsal nectary organ and the tentacular organs are discernible in this instar. The 3rd instar takes 2-2.5 days to complete with the body length reaching about 4.5-5mm before the next moult. 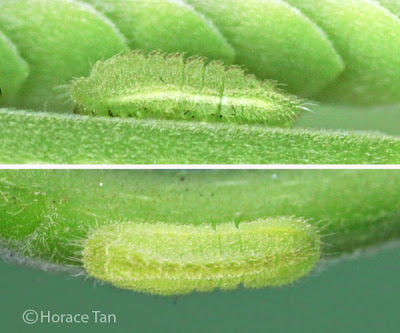 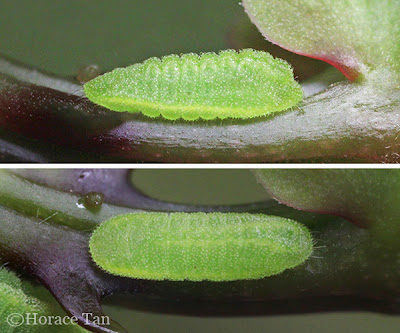 Two views of a 3rd instar caterpillar, dormant prior to its moult, length: 4.7mm. 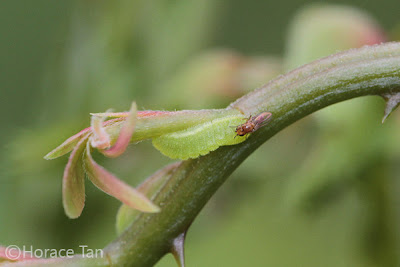 A 3rd instar caterpillar sighted in the field on a young shoot of Acacia concinna.


The 4th (and final) instar caterpillar typically has a reddish brown dorsal band caused by the carpet of tiny stellate setae on the dorsum being of this coloration. Laterally, above and below the level where spiracles occur, similar reddish brown bands are also present. However the extent and intensity of these reddish brown bands varies from specimen to specimen, with some might show little or no trace of such bands. The diamond-shaped prothoracic shield is yellowish green in colour. The nectary organs are rather prominent in this instar and the everted tentacular organs can be easily observed. 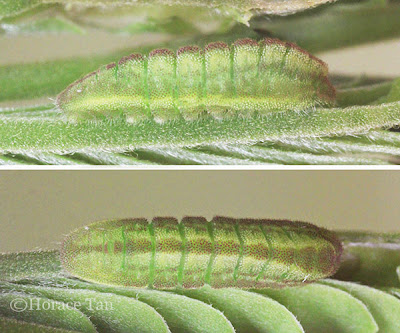 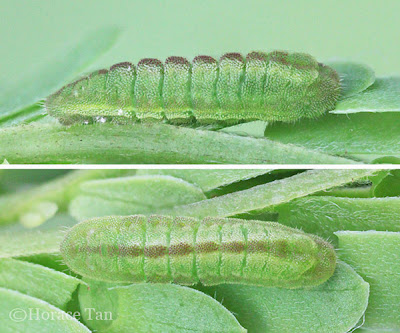 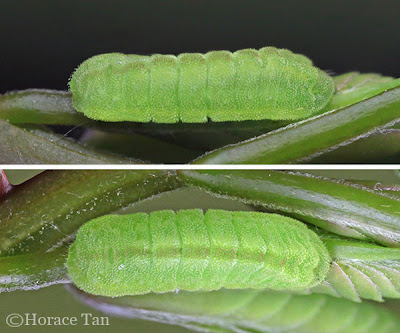 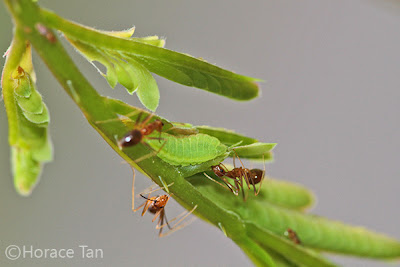 Two views of a 4th instar caterpillar found in the field attended by ants.


In this final instar, the caterpillar eats its way to a body length of up to about 8-9mm within 4-4.5 days. On the last day, the caterpillar ceases eating and its body shrinks somewhat. It wanders around in search for a suitable pupation site. In the breeding environment, the caterpillar typically chooses the tight space in a curled up leaf or the space between two leaves in a pile of leaf litter. At the chosen site, the caterpillar readies itself for pupation by spinning silk threads to form a silk pad and a silk girdle to secure itself. 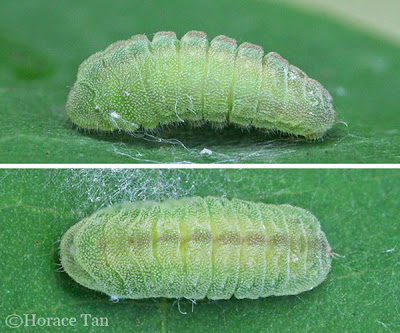 Two views of an immobile pre-pupa of the Banded Lineblue, Red form.


Pupation takes place after one day of the pre-pupal stage. The pupa has the typical lycaenid shape, pale brown in base colour with darker brown and black spots and blotches. Length of pupae: 5.8-6mm. 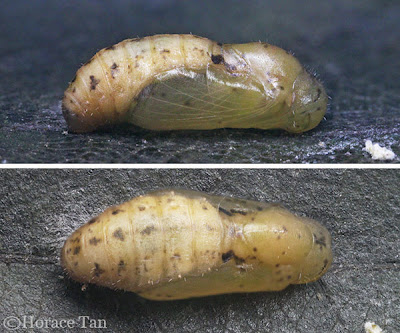 Two views of a pupa of the Banded Lineblue, length: 6mm.


Five days later, the pupa becomes darkened in color signaling the imminent emergence of the adult. The next day the adult butterfly emerges from the mature pupa. 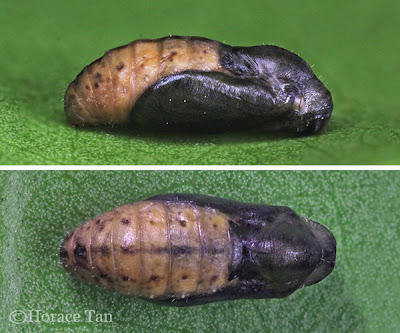 Two views of a near mature pupa of the Banded Lineblue, on the night before eclosion. 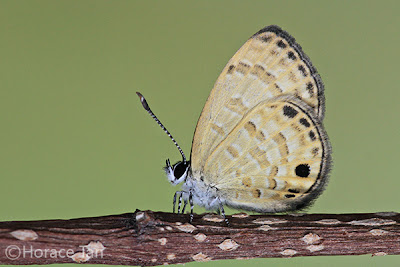 Dear Horace Tan and Federick Ho, I enjoy looking at your photgraphs of the butterflies. I would be most obliged if you or any other member of the butterfly community can identify a black and white butterfly that I've shot in my garden. here is the link: http://stiletto-hottie.blogspot.com/2013/01/wrightia-religiosa-water-jasmine.html
Thank you.

Hi Stiletto,
That is a day-flying moth, not a butterfly. The shape of the antenna (not clubbed, but pointed) points to this being the case. This moth should be a member of the Nyctemera genus. Do a google image search for this keyword, and you should see quite a few look-alike specimens.

Beautiful pics you have there in your blog. :)

Hi Horace,
Your promptness in responding is amazing. Thanks to your expert knowledge and guidance, I think I have identified it as Magpie Moth (Nyctemera secundiana). I've checked with this website, http://www.brisbaneinsects.com/brisbane_tigermoths/MagpieMoths.htm

Please verify and confirm. Thanks for your kind comments.

Hi Stiletto,
I must stress that I am not an expert, just a local butterfly enthusiast. What I could advise is based on my own Google searches for day-flying moths.
Magpie Moth does not have the same large white patches in the hindwing as those depicted in your blog. For Malaysian species, I believe a more appropriate reference is one closer to home, and one such good moth reference is "The Moths of Borneo" site. Look at this page, http://www.mothsofborneo.com/part-6/arctiinae/gallery.php, and you will see a number of similar looking species. Among these, I tend to think that Nyctemera baulus is closest to the one you shot.

Hi Horace, thanks very much for the added information. Please note that there are some minor differences such as; 1) The wings are absolute black (not dark brown)and white. 2)The abdomen is white with black bands, ending in a yellow 'tip'.

Thanks to you, I'm delighted to know for sure that it belongs to the Nyctemera genus :)

Hi Stiletto, Thanks for pointing out the differences. It is best to leave it to the Moth experts to nail the ID at the species level. :)