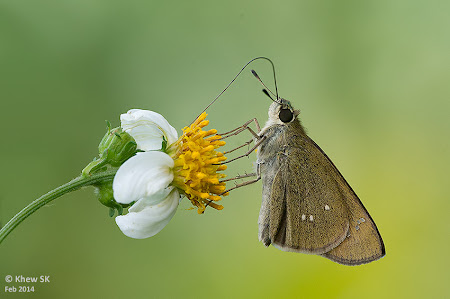 This predominantly brown and rather drab skipper is one of many lookalikes amongst the Hesperiidae family that is frustrating to identify in the field. Skippers are often mistaken to be moths by the general public, and understandably so, due to these butterflies' large eyes, fat bodies and usually unattractive colours. In Singapore, there are likely to be more species that will be added to the checklist as research continues into their early stages and other aspects of distinguishing the many similar-looking butterflies.
This Formosan Swift was shot in the early morning hours whilst it was busy feeding on the flowers of Bidens pilosa, a wild-growing weed in wastelands. The typical colouration of this skipper, light brown with a slight greenish scaling, and the absence of a cell spot on the hindwing below, sets it apart from its close cousins in the Pelopidas and Polytremis genera. The butterfly is relatively common in urban areas, but can also be found in the forested fringes of our nature reserves.
Posted by Commander at 12:00 PM 0 comments