Butterfly of the Month - January 2018

Butterfly of the Month - January 2018
The Tawny Coster (Acraea terpsicore) 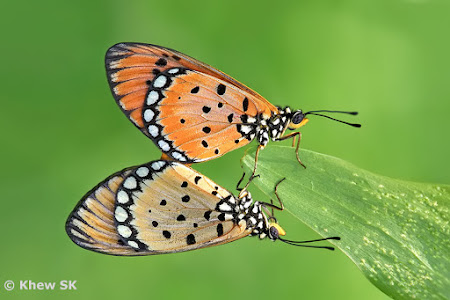 
Here we are, right in the middle of the first month of 2018, and we continue with our feature-butterfly monthly series into its 11th year. The weather is uncharacteristically odd in Singapore for this time of the year and we are enjoying (?) sub-23 deg C temperatures on most days, with the lowest temperature of 21.4 degC recorded in western Singapore in recent years. The persistent wet weather over the past week added to the cold snap as airconditioners were turned off, and tumble dryers doing their fair share to keep the laundry nice and dry. 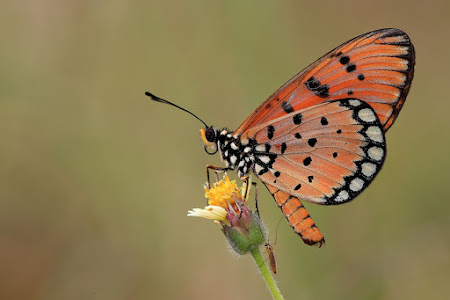 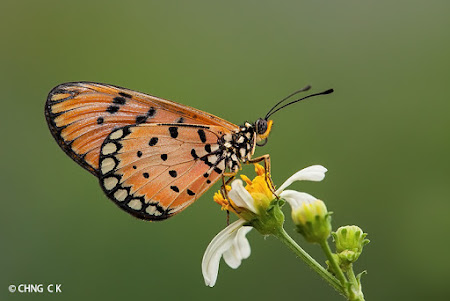 A taste of climate change to come? The exceptional rain on 8 Jan dumped so much water over the eastern part of Singapore over a couple of hours that the drainage system was unable to cope with the sudden downpour. The ensuing floods in some of the low-lying areas created the first major traffic snarl for the year, coupled with half-submerged cars and damaged properties. 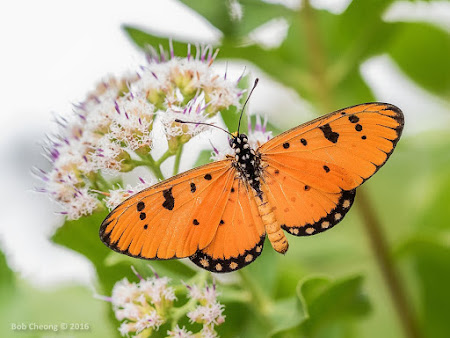 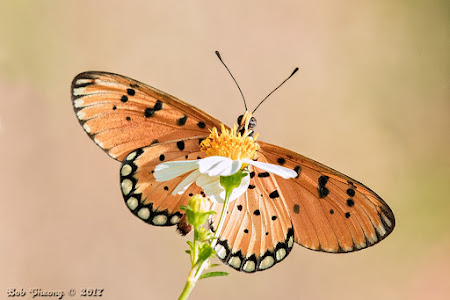 The residents in the eastern US will probably think that a puddle of water in Singapore is nothing compared to the 'bomb cyclone' that dropped a whole load of snow on them. Sub-zero temperatures and foot-high snow closed airports in New York and kept the kids from schools. Even in the warmer south of the US, in Florida, the sudden cold weather caused near-frozen iguanas to drop from trees! So far, we haven't had any records of our local changeable lizards dropping off our trees yet. 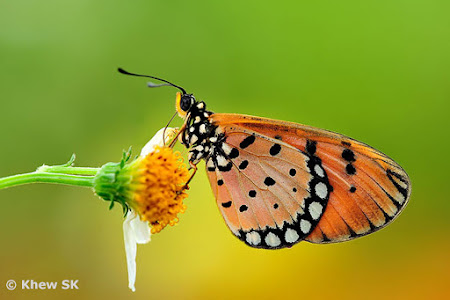 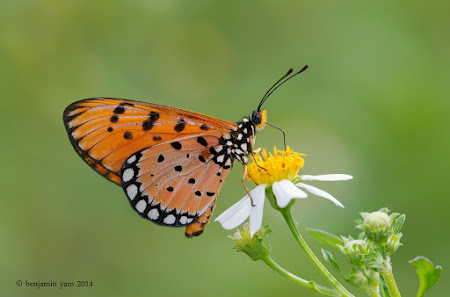 The cold and wet weather has kept our local butterfly-watchers indoors as there is very low butterfly activity out in the field anyway. We look forward to warmer weather and bluer skies in the coming months where we can go out and enjoy the beauty of nature's flying jewels again soon. Until then, we can only ponder on the effects of climate change, and what the impacts are, to our environment and biodiversity. 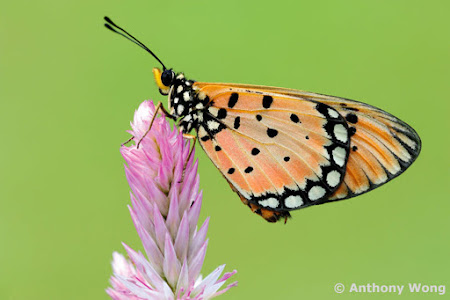 And so we turn to our January Butterfly of the Month, the Tawny Coster (Acreae terpsicore). This species did not appear in Singapore until some time back in 2006. After it reached the shores of Singapore, we postulated its likely voyage all the way from the Indian subcontinent, through Thailand and Peninsula Malaysia. Subsequently, it was spotted in Indonesia, and it is believed to have colonised part of Australia as well. A very tenacious butterfly indeed! 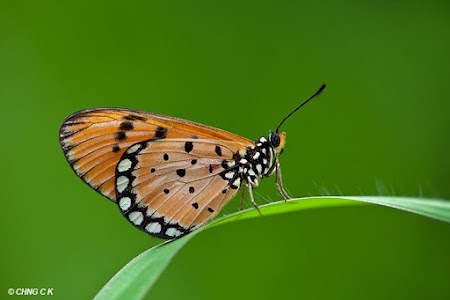 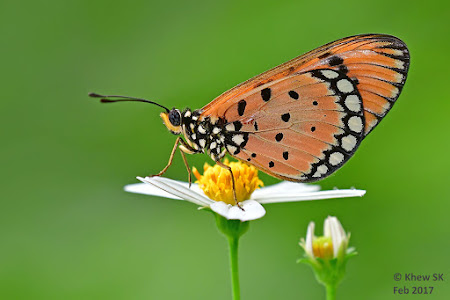 Before 2006, it was first spotted by collectors in the northern states of West Malaysia in 1992 as it progressively made its way down the peninsula over the span of at least a decade. The species' journey is most likely aided by the easy availability of its caterpillar host plants, Passiflora foetida, Passiflora edulis and Passiflora suberosa - all fast-growing Passion Fruit vines that are spread by birds that eat their fruits. Its caterpillars were also found on Tuneria ulmifolia another plant of the Passion Fruit family, and it is highly likely that its caterpillars can also feed on other species of Passifloraceae. 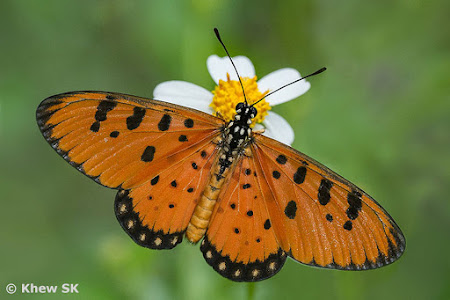 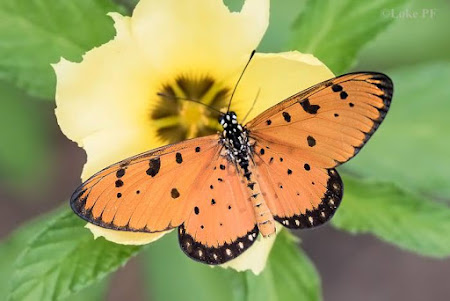 The male Tawny Coster is a deep orange on its upperside whilst the female is a paler orange-yellow. There is a transverse black spot in the cell of the forewing. The underside is generally of a lighter shade of orange with a larger number of black spots on both wings compared to the upperside. There is a marginal row of black-bordered white spots giving the termen of the hindwing a scalloped appearance. 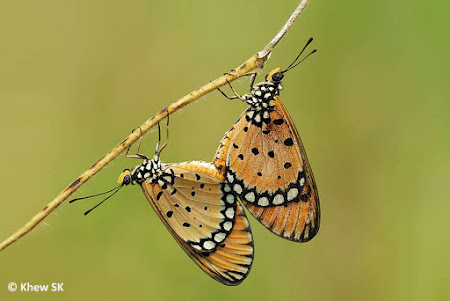 The butterfly has a relatively slow flight, usually fluttering restlessly as it moves around to feed on various nectaring sources. Occasionally, it will stop to rest on twigs or upper surfaces of leaves with its wings folded upright. Most of the time, when it stops to feed on flowers, it tends to keep its wings open for balance. 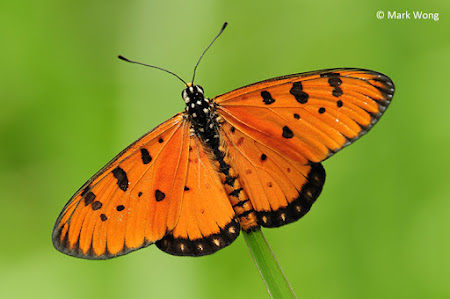 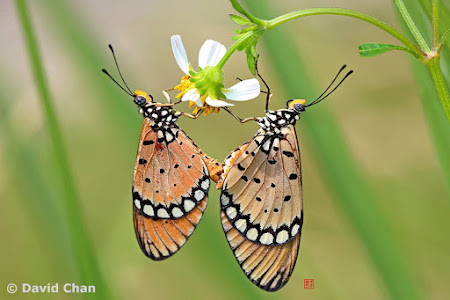 The Tawny Coster is now a permanent extant species in Singapore and is quite common in urban parks and gardens and in undeveloped wastelands where its preferred caterpillar host plant, Passiflora foetida can be found. One of the reasons why this species is so successful may be the way the female lays its eggs - often up to 50 at one sitting and the purported distastefulness of both its caterpillars and adult butterflies. 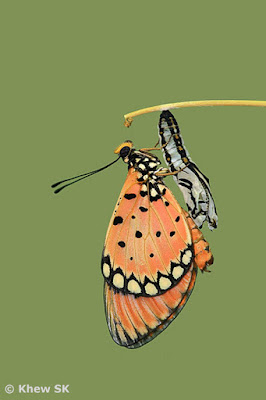 The butterfly is believed to display aposematic colouration in being brightly-coloured and conspicuous. It is likely to be distasteful to birds, as are several other butterfly species that feed on Passifloraceae, e.g. the Lacewings (Cethosia spp). However, it is not immune to attacks from reptiles and mantises - as shown in the photo below where a mantis has ripped off the head of a Tawny Coster that it captured and is eating. 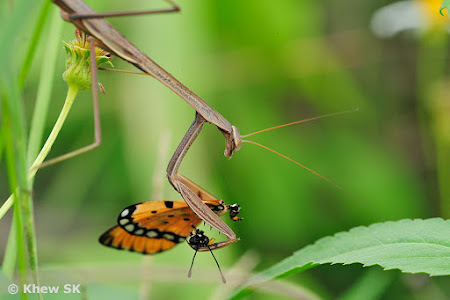 Posted by Commander at 8:48 PM 0 comments