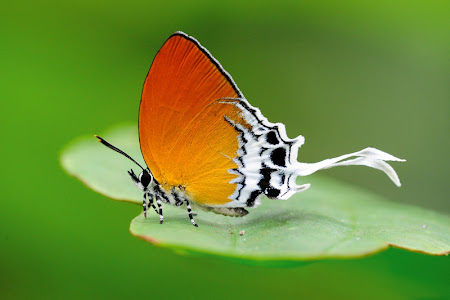 This pretty long-tailed Lycaenid that typically stays within the safe confines of forested areas never fails to impress butterfly watchers. Its bright orange-red undersides, contrasted with the black and white tornal area and long tails make it a very attractive butterfly. The upperside of the Branded Imperial is a jet black, except for the tornal area, which is similar to the underside. At certain times of the day, the butterfly can be observed to sunbathe in sunlit spots with its wings opened flat. However, at most times of the day, it flies around and stops with its wings folded upright, as is shown in this photo.
This pristine Branded Imperial was shot last week in the nature reserves by ButterflyCircle member Anthony Wong. As the caterpillars of this species feeds on the young shoots of the invasive creeper, Smilax bracteata, it is common and is quite widespread in the forested areas of Singapore, particularly in the vicinity of where its caterpillar host plant can be found.
Posted by Commander at 8:50 AM 0 comments