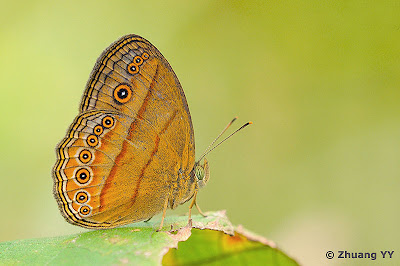 The oh-so-common Dingy and Long Brand Bush Browns aren't the most attractive species for the butterfly photographer. Being fairly skittish and often perching on low shrubs, they do not make very attractive or convenient photographic subjects. Every once in a while however, a more interesting Bush Brown comes along to liven the day up. My first encounter with the Malayan Bush Brown was along a wooden boardwalk with Benjamin in the Central Catchment area. I managed a record shot to which Ben exclaimed "Now that's something special "

I've been peering a little more closely at these Bush Browns ever since, and realised that the Malayan Bush Brown was actually fairly common, but darn, aren't they skittish!

Luck however was on my side on this May saturday morning. Trudging around the shrubs in Upper Seletar Reservoir Park with Benjamin, we spotted this rather pretty fellow flitting from plant to plant. After a wild-bush(brown)-chase around the prickly and mozzy infested shrubs, our dear Malayan Bush Brown decided to play ball and stay put for a whole 30 seconds. Down-on-one-knee, Face-in-prickly shrub, the Tamron 180 was levelled at this usually skittish butterfly. "Smile for the camera!!". As the image sharpened in the viewfinder, along came the familiar "this-is-it" feeling. This feeling reached a climax when the D300 announced the *beep beep* focus confirmation *prrrrrrrrrrrrrrrrrrrrrrrak* GOTCHA! at 6fps!

Technically it was not a difficult shot. Conditions were slightly overcast and my shooting posture was a tad awkward, hence the decision to use a marginally higher ISO of 640 and a larger aperture of f5 to get the creamy-smooth backgrounds that have become the signature of ButterflyCircle photographers. Indeed, the wonderful community at ButterflyCircle has shown me that macro can be shot handheld at larger apertures with wonderful results!

Till the next rare brown!

ButterflyCircle Photographer : Zhuang Yaoyang, an electrical engineer in his late 20's.
Posted by Commander at 9:00 AM 0 comments