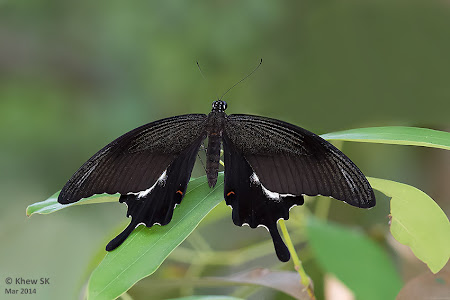 After a period of active flying, the Great Helen is often observed to rest with its wings opened flat as is shown in the photo above. This species exhibits an example of "startle display" strategy. At rest with its wings opened flat, the butterfly's forewings conceal the white patches on the hindwings, making it appear totally black. But when startled, it flashes the white patch to 'dazzle' a would-be predator momentarily, giving it a precious moment to make good its escape.
Posted by Commander at 12:00 PM 0 comments