Butterfly of the Month - February 2015 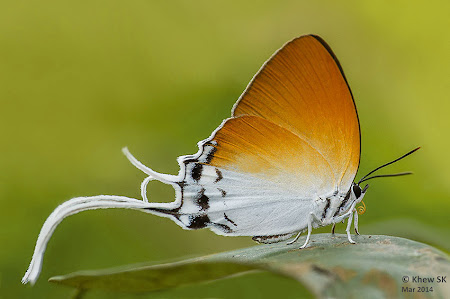 We're into the Lunar New Year month of 2015, where the Chinese community celebrate the incoming Year of the Goat (or sometimes referred to as the Sheep or Ram as alternative references in the animal horoscope). In the Chinese Zodiac system, the Goat is the 8th animal amongst the 12 animals in the cycle of the Great Race to meet the Jade Emperor. 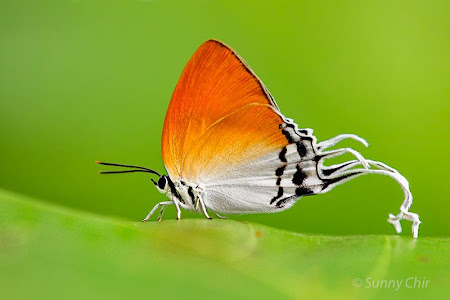 The Year of the Goat in 2015 starts on 19 Feb and ends on 7 Feb 2016. According to the Chinese Calendar, the element for 2015 is wood and the lucky colour is green (good for us nature lovers and the environmentalists!). Coupled with the Goat being the 8th animal in the Zodiac, and the Chinese affinity for the number 8 being a lucky number, we start the Lunar New Year with lots of luck! 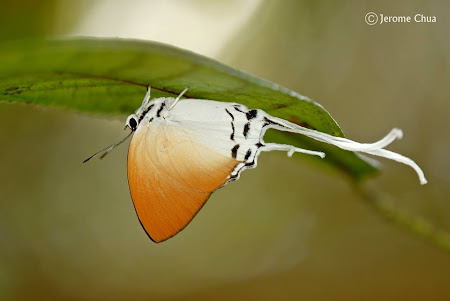 The Goat's personality, according to the mythological beliefs, tends towards those born under this sign to be disorganized, thinkers, creative, and places importance on appearances. Notwithstanding these general attributes, we hope that 2015 will be a year of global success and peace. 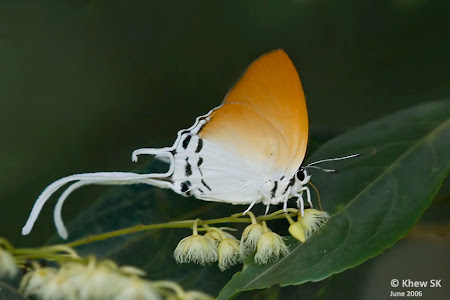 Speaking of peace, the last few weeks of the turbulent Year of the Horse in 2014, displayed a rather disturbing trend of extreme individuals and groups with suicidal and sadistic tendencies taking terrorism to unprecedented depths. In the past two months alone, we have had terrorist situations in Australia and France - two countries that would have seldom been associated with terrorist bombings and shootings. And then the grim ISIS madness gripped the world again, with the mindless executions of two Japanese prisoners by beheading, and the burning of a captive Jordanian pilot. A video of the execution spread through cyberspace prompting worldwide condemnation. 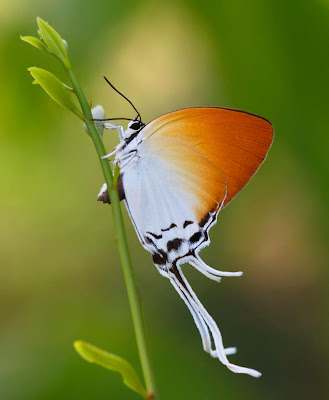 A Grand Imperial shot on the island of Koh Phangan, Thailand.  This is the same subspecies found in Malaysia and Singapore
© Antonio Giudici

This time, even the Islamic world was shocked at the wanton killing of totally defenceless men by the ISIS terrorists in the name of Islam. These soulless murderers are certainly not deserving of preaching any religion whatsoever, except one of absolute and darkest evil. That the execution of one of their own prompted a retaliation counterstrike by the Jordanian Air Force is not going to help peace in that part of the world, even as we wonder how this would end for ISIS? 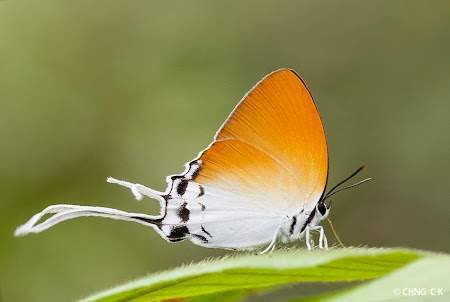 Coming back to our more innocent butterfly world, the rains of the Northeast monsoons have pretty much dried up, and the weather is a bit more conducive for butterfly outings here in Singapore. However, butterfly activity is still generally low, particularly in the forested areas. An interesting observation (purely anecdotal though) to note is that the Hesperiidae (or Skippers) appear to be the first to make their presence felt more prominently, compared to the other butterfly families. 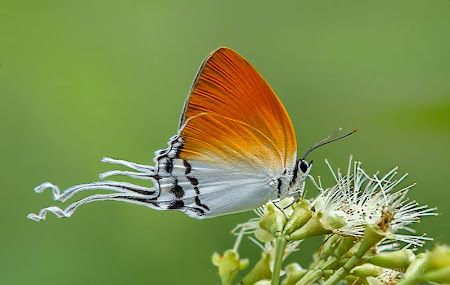 This month, we feature an attractive long-tailed Lycaenidae, the Grand Imperial. This pretty "Hairstreak", arguably the largest member of the family in Singapore if measured from wingtip to the ends of its long tails, is considered a rare species. Usually found in Singapore's forested nature reserves, it tends to stay in the shady forest understory, flitting amongst the thick shrubbery. 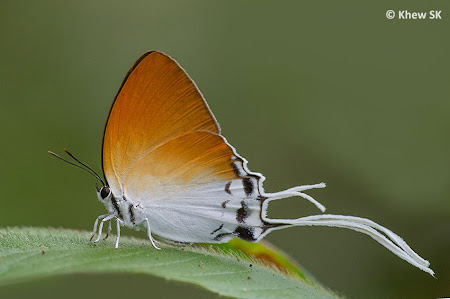 My first encounter with this species was on the military-controlled island of Pulau Tekong - an island on the northeastern coast of Singapore, measuring about 25 km2. Having had the opportunity to participate in NParks biodiversity surveys in the early 2000's on Pulau Tekong, I encountered a colony of this species quite regularly on the island. Perhaps the undisturbed forested areas was conducive for the Grand Imperial, and the highest count in terms of numbers was 8 individuals on one outing. 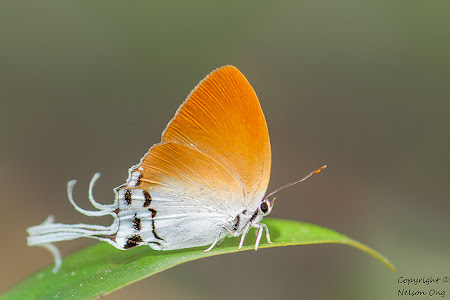 Over on mainland Singapore, the species is shy and remains in the sanctuary of the forested nature reserves. The caterpillar host plant is a parasitic plant, which appears to be uncommon in the forested areas. The life history is being documented, and will be featured on this blog in the near future. 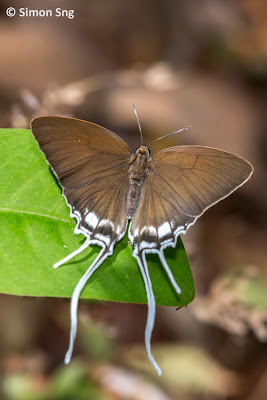 The Grand Imperial has a deep bluish green upperside in the male, with broad black apical forewing tips. Females are a drab brown above and unmarked on the forewings but features large black marginal and submarginal spots on the hindwings. 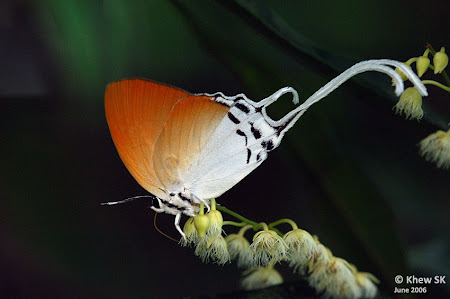 A male Grand Imperial feeding on the flowers of a tree 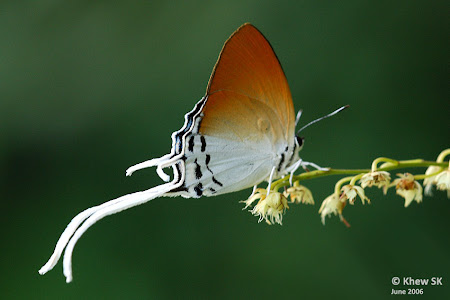 A male Grand Imperial. Note the circular "disc" on the underside of its hindwing

Where found, the female is the commoner sex, and sometimes more than one individual can be sighted. Males tend to stay at treetop level and occasionally stop with their wings opened flat to sunbathe. Females are sometimes found in the vicinity of its caterpillar host plant closer to the ground. 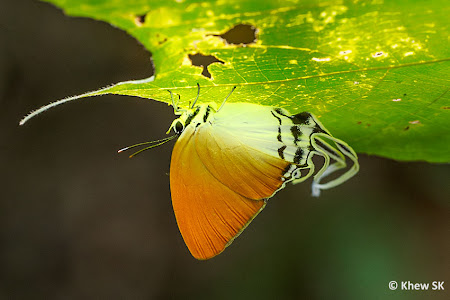 A Grand Imperial takes cover under a leaf

The Grand Imperial flies with its long white tails trailing elegantly behind as it flits in the shady forested areas. Females have an interesting habit of hiding under leaves, resting upside down, probably to hide from predators. As it rests, the long tails twirl actively, as though they are alive, and this movement may fool predators to attacking the tails and tornal area of the hindwing, missing the critical parts of the butterfly when attacked, allowing it to escape. However, when alarmed, the butterfly will take to the treetops very quickly. 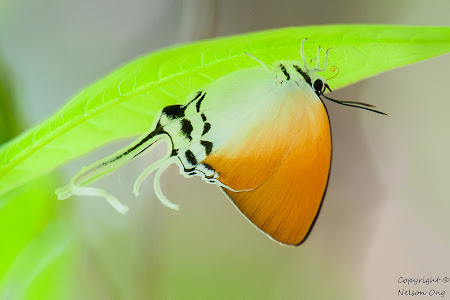 As we celebrate the Lunar New Year and welcome the Year of the Goat, all of us at ButterflyCircle would like to wish all our Chinese readers...