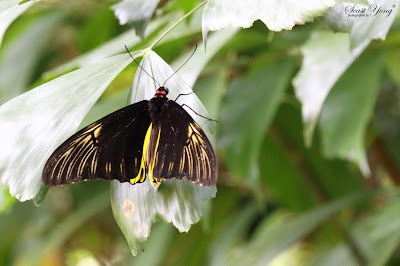 Back in March 2011, I found the caterpillar of the Malayan Birdwing (Troides amphrysus ruficollis) at Alexandra Hospital. It was recorded as a re-discovery and species #301 in the Singapore Butterfly Checklist. After that, there appeared to be no reliable sightings of this gentle giant butterfly until now.
Last weekend, ButterflyCircle member Yong WH managed to encounter the Malayan Birdwing again! This time, a male was spotted perched on some leaves of the Fishtail Palm, taking a rest. It is hoped that with more schools and gardens cultivating one of its host plants, Aristolochia acuminata, this magnificent Birdwing will fly in our Singapore skies again.
Posted by Commander at 8:38 AM 2 comments