Butterfly of the Month - March 2018
The Ancyra Blue (Catopyrops ancyra) 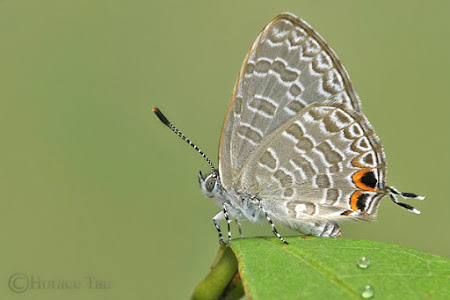 We are into the third month of 2018 already! Time and tide wait for no one, as the saying goes, and if you are waiting for things to play out in this Year of the Dog, don't wait too long. And if you are the type who makes bets against Lady Luck, you can only wish you were as lucky as the punter who pocketed more than S$6,000,000 in prize money for the 2018 Lunar New Year Toto Draw. 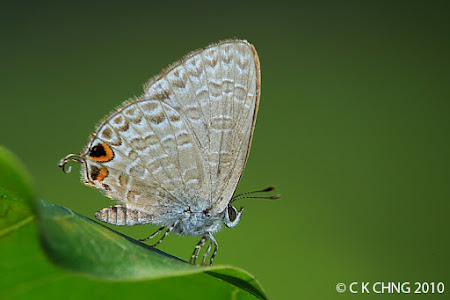 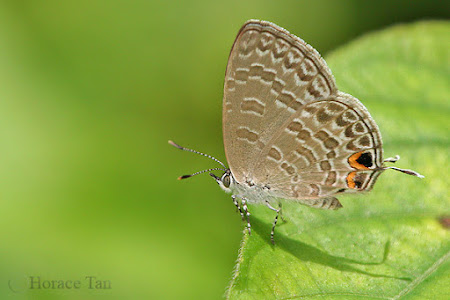 Two bits of interesting global news may make an impact on all our lives in the coming years. The first, coming from China, is the proposal to drop the presidential term limit. This would essentially allow President Xi to stay on as the leader of the world's second most populous nation beyond 10 years. This is a break from the unwritten rule of two five-year terms as head of the party. Supporters of this strategy say that this will ensure stability, consistency and the ability for long-term planning by the Chinese government. 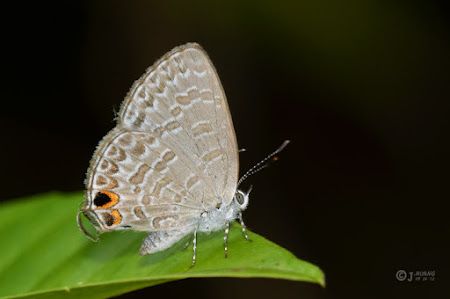 On the other side of the globe, we have the US President imposing trade tariffs on steel and aluminium, threatening to set off a trade war with other countries. Consistent with his "America First" policy, President Trump continues on his strategies to protect US interests in terms of trade and commerce with the rest of the world. Whilst it is hard to predict the outcome of a trade war that the US may have started, we live in exciting times as we watch all these battles unfold, and wonder how it would affect us (or not). 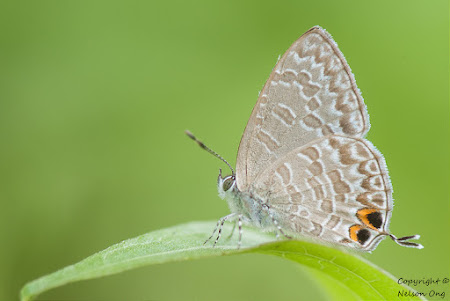 
In Singapore, the Budget 2018 has been announced, and the much-predicted increase in the Goods and Services Tax (GST) by 2% was received with a lot of heated debates. Albeit it was an 'early warning' of the increase, which is slated to go up only some time between 2021 and 2025, there was generally an unhappy reaction to the news. After all, why would anyone be happy with an increase in tax and to pay more? The government continued to rationalise the need for the increase and explain why such an increase would be for the greater good of Singapore's future. 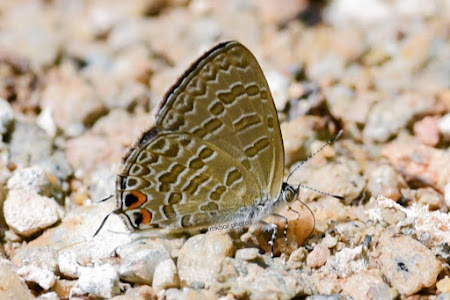 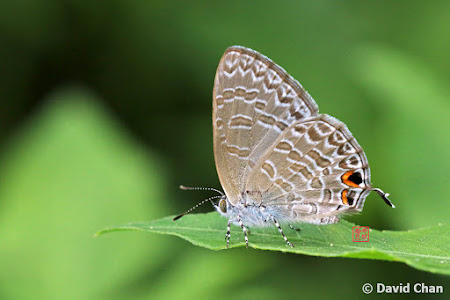 And then we had a Singaporean who tried to escape a jail term by attempting to leave the country via boat. His planned 'jailbreak' on a fishing boat heading for Malaysia was thwarted by a whistle-blower and our vigilant law enforcers. This brazen shot at escaping the long arm of the law was almost comical as the fishing boat headed out to cross the border in broad daylight was stopped by the Police Coast Guard. Apparently, it was not the first time that the boatman who was trying to ferry the criminal out of Singapore had done something like this, so perhaps some complacency set in. 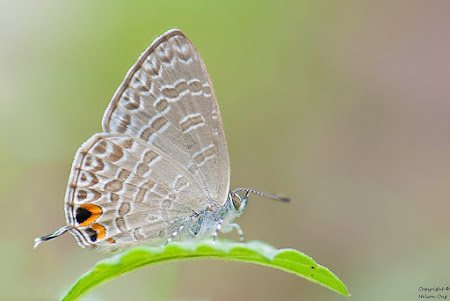 Over to our Butterfly of the Month for March 2018, we feature a butterfly that was a new discovery for Singapore in 2004. It was first spotted on Pulau Ubin and recorded as a new find for Singapore. The early authors' checklists did not list the Malaysian species as being extant in Singapore. As it was uncertain as to whether it is the same subspecies as the Malaysian one, we have recorded this new find, the Ancyra Blue (Catopyrops ancyra) at the species level only. 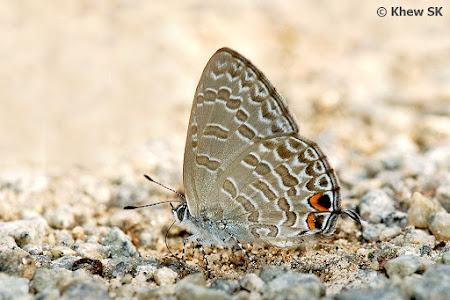 An Ancyra Blue puddling on a damp dirt track


The Ancyra Blue was first spotted puddling along a dirt track along the Sensory Trail at Pulau Ubin. Although initially appearing like one of the Line Blues (Nacaduba spp), the sharper and more distinct white markings on the underside of the wings called attention to the possibility that it was something new to Singapore. Further investigations revealed that it was indeed a species that had not yet been recorded in Singapore. Subsequently the Ancyra Blue was observed in various parts of the main island of Singapore, even in urban parks and gardens. 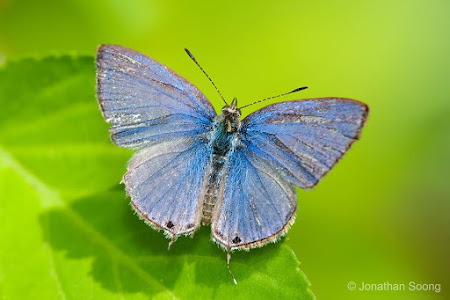 A male Ancyra Blue sunbathes in the sunshine, show its blue upperside 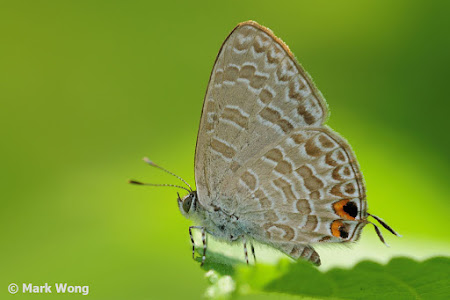 The underside of both sexes feature black orange-crowned tornal spots on the hindwing. These orange areas in spaces 1b and 2 are inwardly defined by a narrow dark line. The white striations on both wings are distinct and not diffuse. There is a white-tipped filamentous tail at vein 2 of the hindwing. 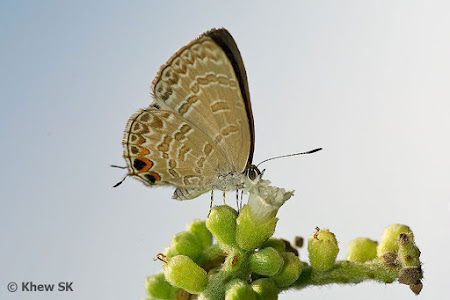 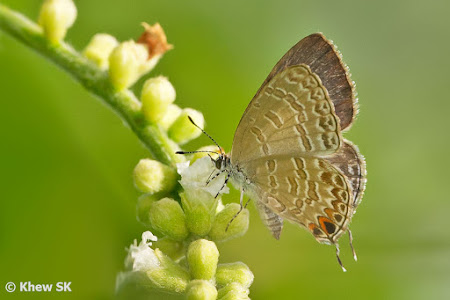 
The butterfly has a fast erratic flight but is often found perched upright on the top surfaces of leaves with its wings folded up. Occasionally, it is seen feeding on the flowers of plants like the String Bush. Males of the species are often encountered puddling at damp footpaths. 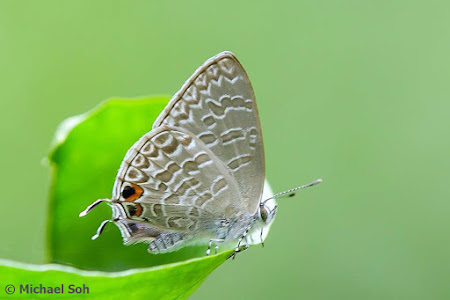 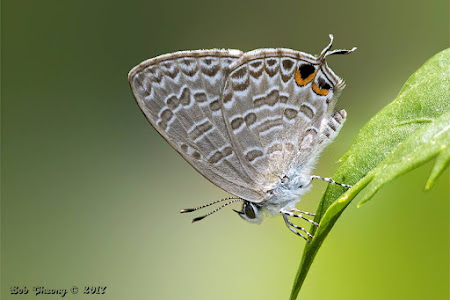 The caterpillars of the Ancyra Blue have been successfully bred on Pipturus argenteus and Trema tomentosa in Singapore. Both these host plants are common and widespread, which may explain the wide distribution of this species across Singapore - from the Central Catchment Nature Reserves to urban parks and gardens. 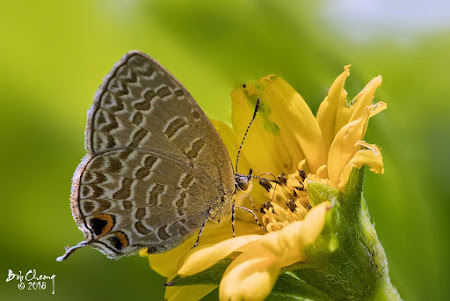 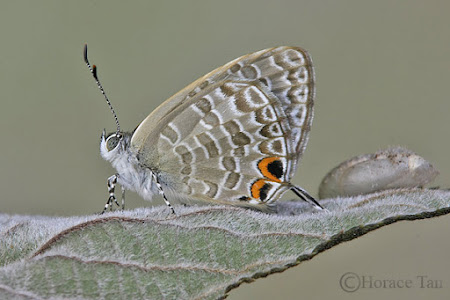 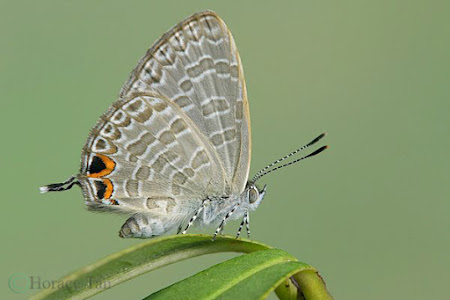 Whilst the Malaysian subspecies aberrans has been described as "rare in lowland forest", its Singapore counterpart cannot be considered rare as it has been observed with relative regularity, and in some instances, a small colony of the species was observed in its favourite locations near where its caterpillar host plants thrive.