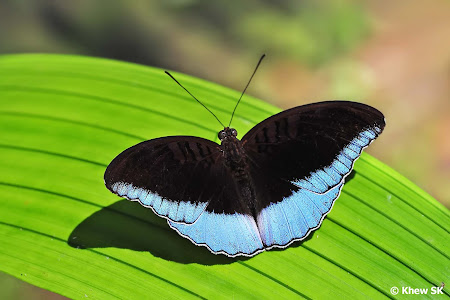 A male Horsfield's Baron basks in the bright sunshine


In medieval times, Barons are members of a specific rank of nobility, especially the lowest rank in the British Isles. Being part of the European imperial, royal, noble, gentry and chivalric ranks, a baron is ranked just below a Viscount and Count and above the knights and military personnel in the hierarchy. 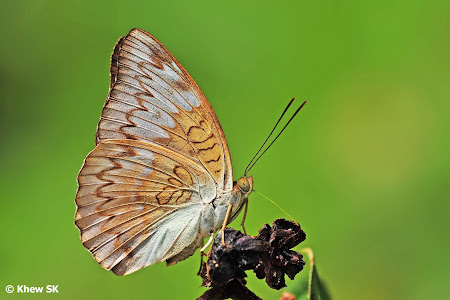 In modern times, barons are often referred to people having great wealth, power, and influence in a specified sphere of activity or industry. Irrespective of which era in history we prefer to be associated with, to be referred to as a baron would be to be given a position that is above the ordinary folk by any measure. 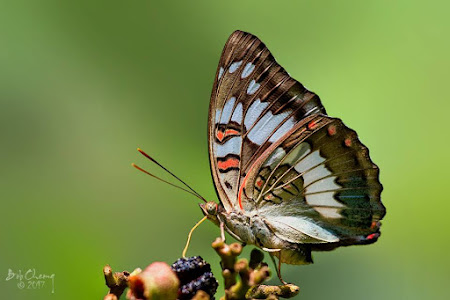 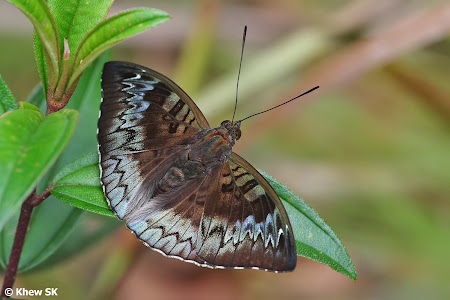 Amongst our butterflies, barons are the common names given to several species of stout-bodied and powerful flyers in the Limetidinae sub-family. As postulated in an earlier blogpost, the British gentry titles appear to be used for many species of butterflies amongst the Nymphalidae. There are five extant "baron" butterflies found in Singapore with four in the genus Euthalia and one in the genus Tanaecia (Cynitia). All five species display varying degrees of sexual dimorphism, of which the males and females are different in size, colours and markings on the wings. 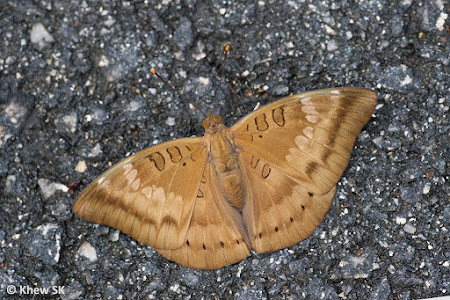 One of the urban species of " barons" in Singapore is the Baron (or sometimes referred to as the Common Baron in some countries). It is widely distributed, and can be found in urban gardens, parks and in the forested reserves. As its preferred caterpillar host plant is the Mango (Mangifera indica), it is sometimes seen in residential areas where the host plant is cultivated as a roadside tree. 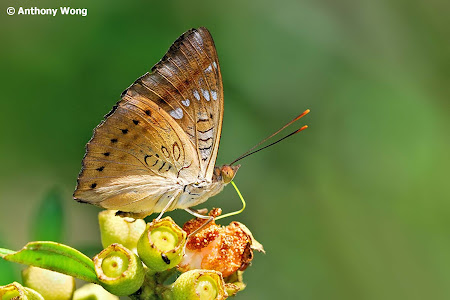 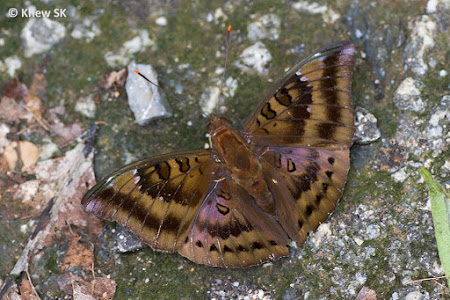 The Baron is dark brown above with a broad obscure post-discal band on both wings. On the upperside of the forewings are small white spots at the end of the disc and sub-apical area. The wings have a dark purple tinge when viewed in a side light. The underside is paler, with a series of sub-marginal black spots on the hindwing. 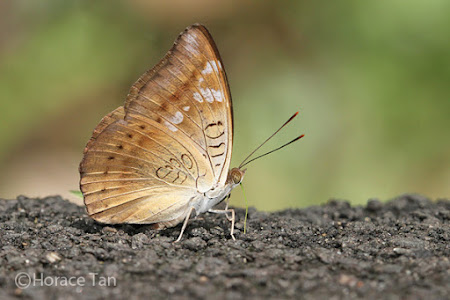 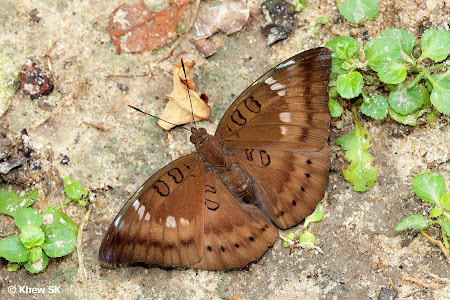 The female is larger of of a lighter brown than the male. It has larger but diffused post-discal spots on its forewings. These spots are variable and in some individuals several spots may be totally absent, which may suggest a different species. In this earlier blogpost on the variability of the Baron, examples of the range of the differences in the presence/absence of the spots are shown. 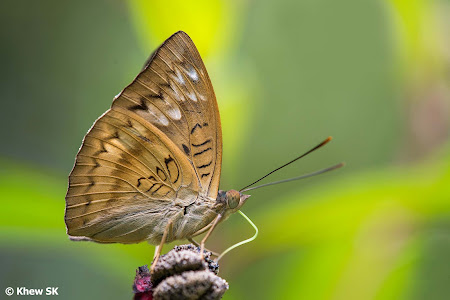 The Malay Baron is usually associated with the forested nature reserves of Singapore, but can sometimes be spotted in urban parks and gardens. This species is remarkable in that it is a good example of sexual polymorphism, particularly in the males. There are so many variants in the forms of the males as to suggest that further studies and categorisations of the forms should be conducted on this species. 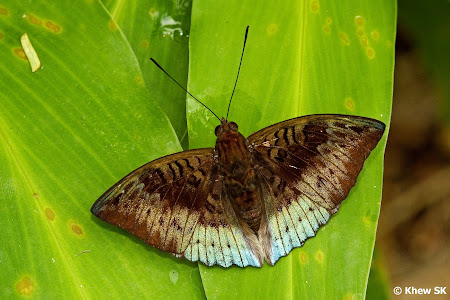 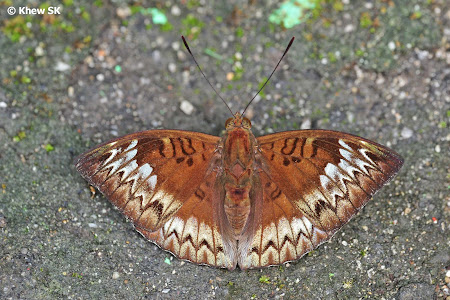 
It is probably more often encountered than the preceding species and is considered common in Singapore. It is fast-flying and can be skittish, often taking off at high speeds when disturbed. Both males and females may be observed feeding on overripe fruits on bushes and on the forest floor. The male is smaller in size than the female, and occurs in three described forms, although in recent years, there have been individuals that show characteristics that are hybrids across several forms, or could be even a distinct form. The underside of both sexes are paler than the upperside with zigzig post-marginal markings across both wings. 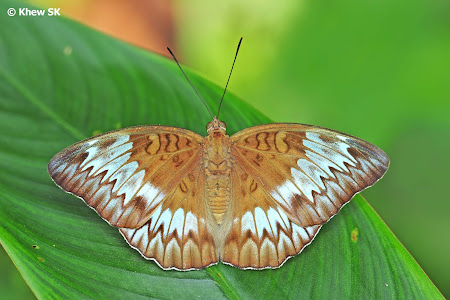 The female is brown with distinct markings on both wings. It looks similar to the Malay Viscount and the female Horsfield's Baron when in flight and can sometimes be confused with the other two lookalikes. The sub-marginal zigzag markings are distinct and connected across both the fore and hindwings. 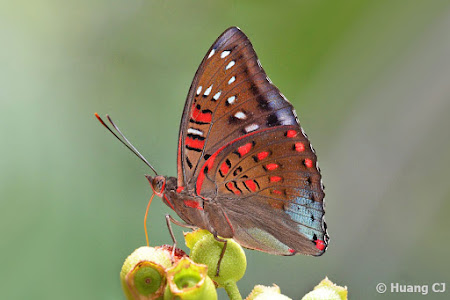 
The Green Baron is moderately common and is quite well-distributed across the island. As its caterpillars feed on the parasitic plant, Malayan Mistletoe (Dendropththoe pentandra), it can be found anywhere from our urban parks and gardens to the forested nature reserves. Both sexes are strong flyers and alert to movement. 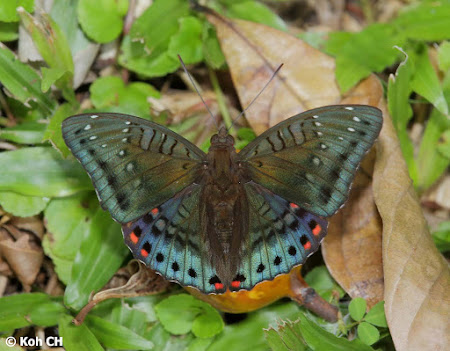 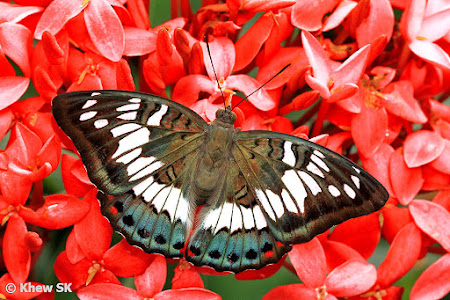 The female Green Baron has a broad white band across both wings, which may cause an observer to mistake it for a Commander when it is flying around. It is much larger than the male but both sexes are often observed to feed on overripe fruits as well as flowering plants. 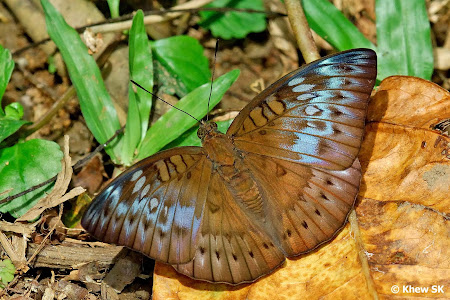 The rarest of our Barons in Singapore, the White Tipped Baron has been infrequently sighted mainly in the forested nature reserves. Another typical example of sexual dimorphism like its other cousins from the Euthalia genus, the females are larger than the males and both sexes appear quite different from each other. 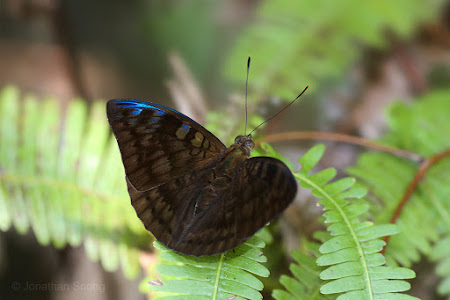 The male White-Tipped Baron is dark brown above with the usual markings that make it look quite similar to the Baron and Malay Baron. The species displays a slight bluish sheen and in particular the leading edge of the forewing from the apex to mid-costa appears blue in certain lighting conditions. The underside is paler with the usual darker markings across both wings. 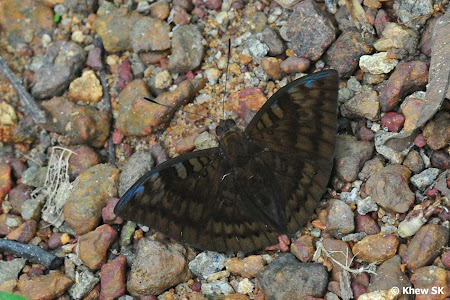 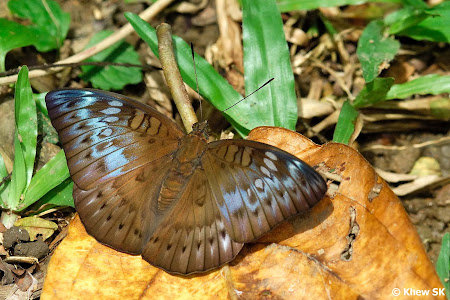 The female appears similar to a Malay Viscount at a glance and is similarly coloured. The forewing has large white pointed post-discal spots in spaces 2-6. The dark sub-marginal line on the hindwing is composed of dark arrowhead spots pointing towards the wing margins. 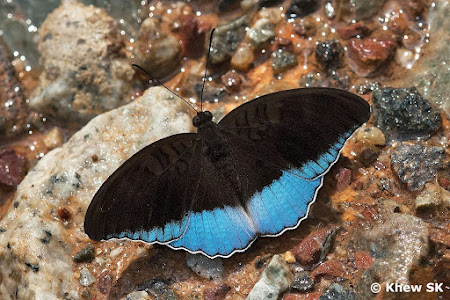 The last of the "barons" that is in a different genus from the four preceding species. The Horsfield's Baron belongs to the genus Tanaecia (which has been reclassified under Cynitia in some recent references) . The species displays an exaggerated sexual dimorphism where the males and females look so different as to suggest that they are two different species. 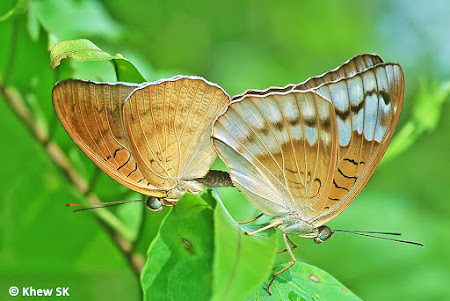 The upperside of the male Horsfield's Baron is a rich velvety black with a broad and distinct bright blue marginal border across the hindwing that reaches the tornal area of the forewing. The underside is a pale buff with light brown diffused markings. 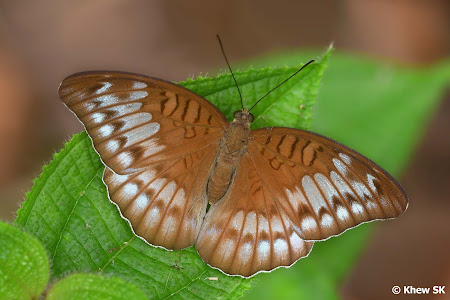 The female is a pale reddish brown with markings that superficially resembles a Malay Viscount or a female Malay Baron, and indeed, these three species are often confused in the field. The sub-marginal V-shaped markings in the female Horsfield's Baron are more diffused and not as distinct/sharp as the lookalike species.