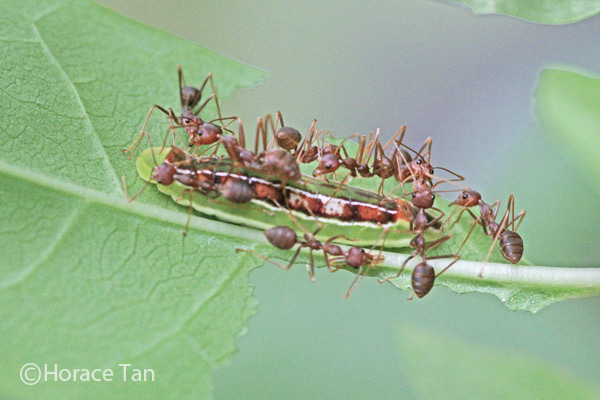 In many ways, ants are the greatest cooperators on earth. As eusocial insects, they are well known for their highly cooperative and coordinated societies, but they also cooperate with other organisms.  Ants engage in mutualisms—aka symbiotic, cooperative, or mutually beneficial interactions—with plants, fungus, and other insects. They serve as effective protectors, fertilizers, seed dispersers, tenders, cleaners, and farmers. Ants are such prolific cooperators, that an entire class of species interactions exists to describe cooperative associations with ants: myrmecophily (meaning ‘ant love’). But wait, this is a butterfly article, right? 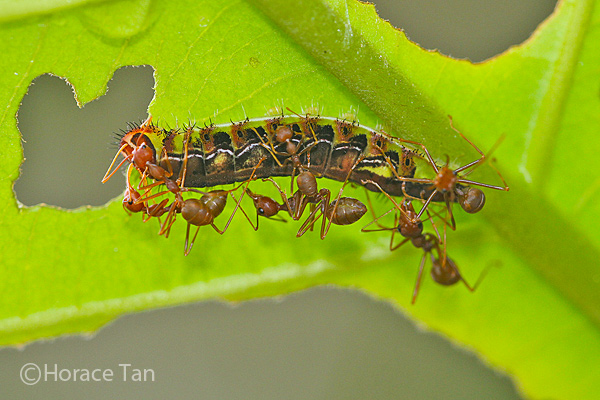 A caterpillar of the Centaur Oakblue being attended by Weaver Ants. 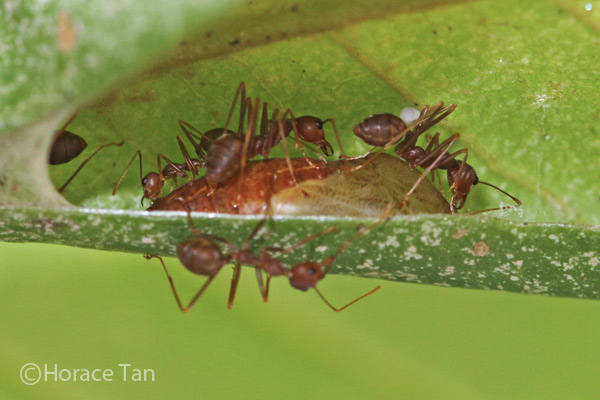 A pupa of the Centaur Oakblue still getting the attention of a number of Weaver Ants. 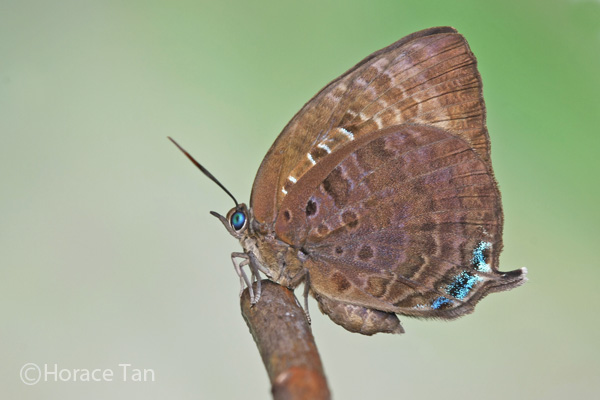 
Right: butterflies. As you well know, butterflies are a wonderful group to study for both scientific and artistic purposes. Butterflies are beautiful and fascinating, and as far as I'm concerned, the butterfly family Lycaenidae is the most beautiful and fascinating of them all. With more than 6,000 estimated species, the Lycaenidae is a huge family (second in number only to Nymphalidae), and lycaenid butterflies occur in nearly every habitat where a butterfly could conceivably occur. They exhibit an incredibly broad hostplant range, feeding on numerous plant families, as well as fungi, lichen, and yes, other insects. But what really makes them the most interesting butterfly group is their larval association with ants. 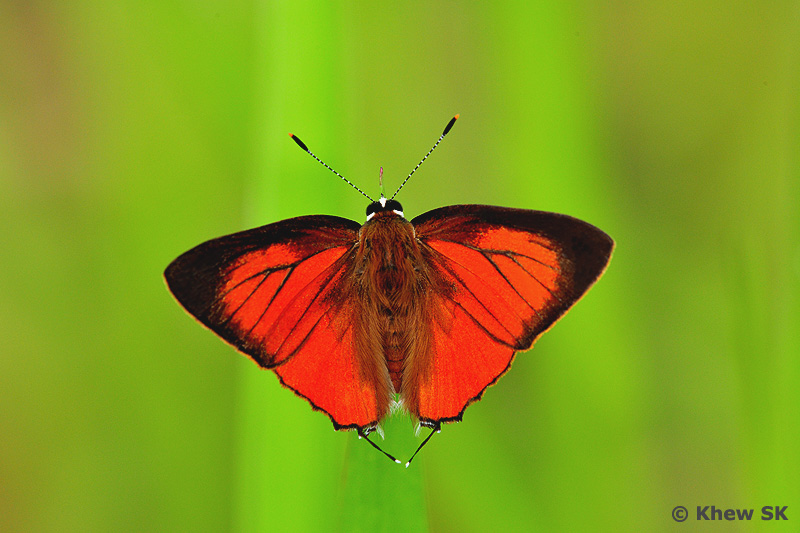 Caterpillars of the Common Red Flash in the company of attending ants. 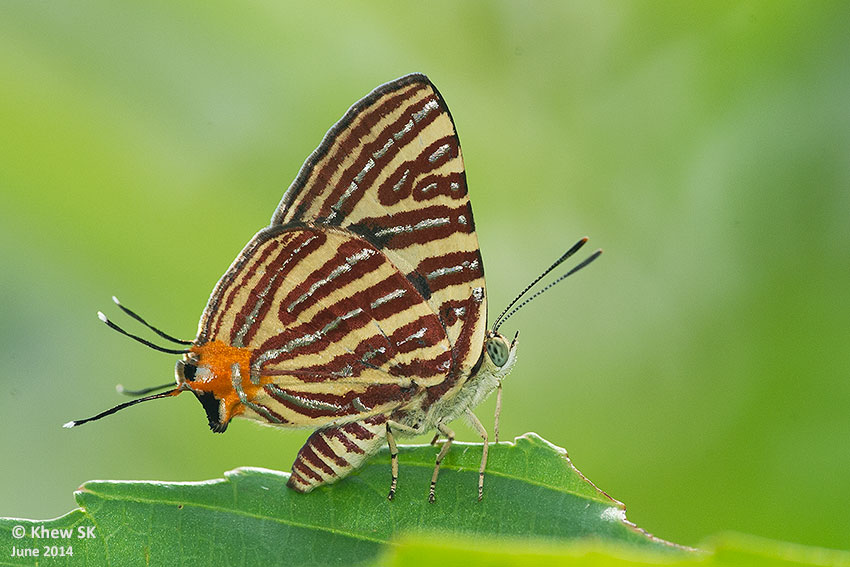 Caterpillars of the Long Banded Silverline interacting with ants eager to get a taste of its nectary excretion.


More than 75% of the world’s lycaenid species engage in highly specialized larval interactions with ants. In its most basic form, the interaction looks something like this: caterpillars produce nutritious secretions (honeydew) from specialized organs for the ants to eat, and in exchange the ants protect the caterpillars from predators and parasitoids. There are many aspects of this interaction that are tantalizing to a biologist, not least of which are the behavioural and communicative adaptations that must take place in order for the association to work. Caterpillars use a variety of mechanisms, including chemical mimicry and acoustic signaling, to elicit the favor to ants. 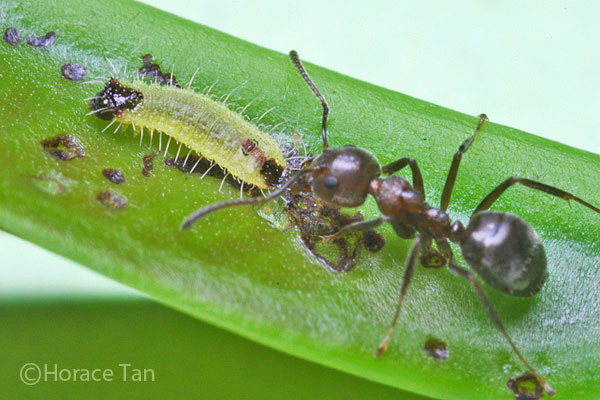 A 2nd instar caterpillar being tailed by an ant which is eyeing the nectary fluid excreted by the caterpillar. A sequence of three pictures showing an ant receiving its pay packet of a nectary droplet from the 2nd instar caterpillar.


Moreover, the interactions can be highly variable, with different lycaenid species engaging in different ‘flavors’ of ant association. Some lycaenids do not associate with ants at all, and among those that do the interaction can range from generalist, facultative mutualism (meaning that the caterpillars don’t need ants to survive, but they’ll associate with them if they’re available) to species-specific, obligate associations (a caterpillar’s survival absolutely requires being adopted by the correct ant species).  The interaction is not always a truly cooperative one either: there are many species of lycaenids that have evolved to parasitize their ant partners. In these cases the ants still care for the lycaenid caterpillars, but instead of feeding on plants like the majority of lepidopteran larvae, the caterpillars switch to carnivorous food sources such as ant brood or other insects that are within the ants’ care. Amazing! 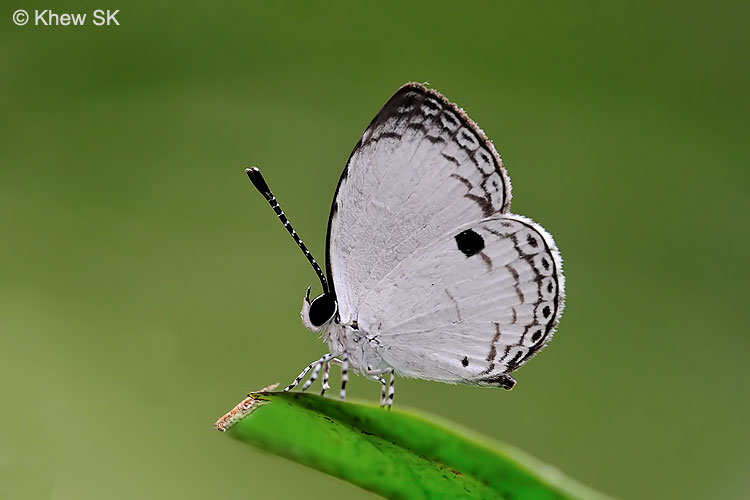 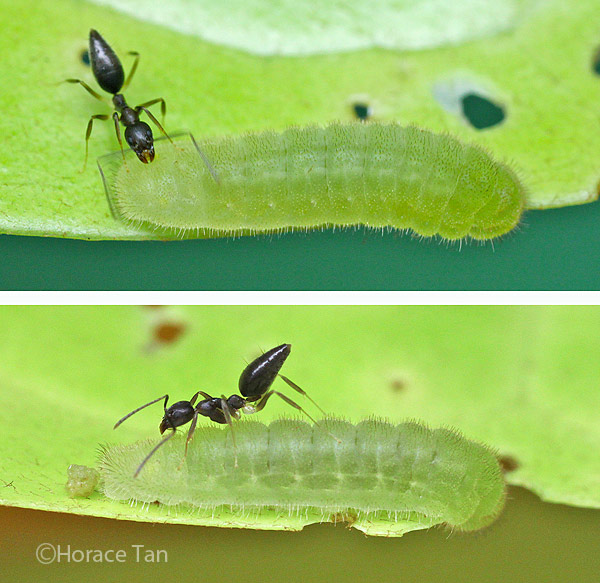 A Quaker caterpillar being tended by an ant.


However, despite the fascinating life histories and the commonness of lycaenids worldwide, they remain some of the most mysterious butterflies in many places.  For example, if you look through the lycaenid section of a good butterfly field guide, you might be amazed to see how often the larval food source is unrecorded. Moreover, many times we think we know what a species eats, we're dead wrong! Hostplant records are often based on anecdotal field observations or on rearing experiments in captivity, but what a caterpillar will eat versus what is does eat are two different stories. Horace recently told me that he's successfully reared the Ciliate Blue (Anthene emolus), a species known to be carnivorous throughout SEA, on plants, and that he has also observed "known" herbivores munching on treehoppers. Go figure. 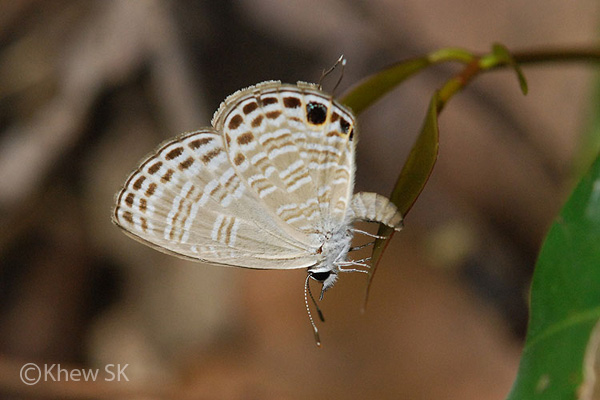 A mother Singapore Four-line Blue laying an egg on its host plant. 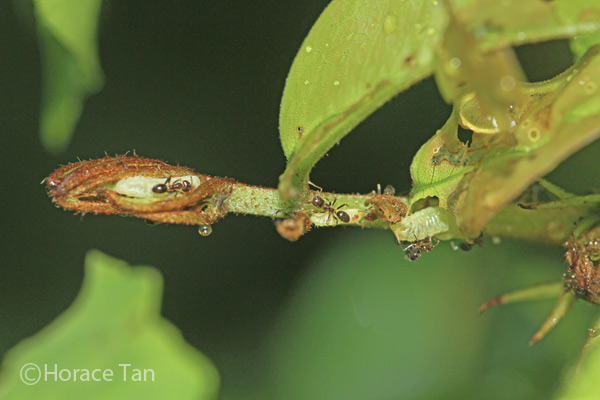 Several caterpillars of the Singapore Four-line Blue with ants in attendance. 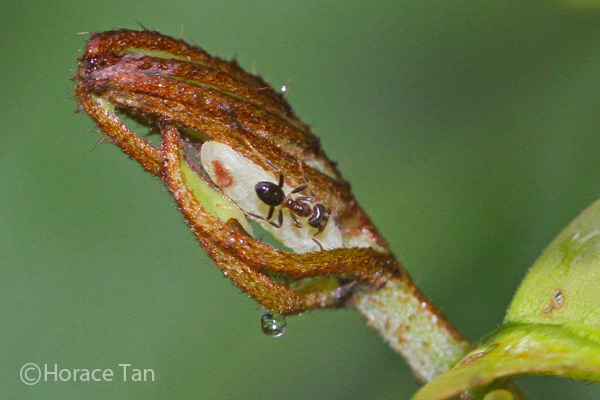 Close-up view of one caterpillar (and one ant) in the picture above.


I suspect that carnivory is more widespread than we think. I often come across species descriptions that say something along the lines of "Lives in ant shelters, larval hostplant unknown," and my first suspicion is parasitism. Then again, there are also plenty of species that live inside ant shelters during the day when predators are active, but leave the nests at night to feed on plants under the watchful guard of their ant escorts. In order to describe species' diets and ant associations with confidence, we need systematic observations and study. In lieu of that, the life histories and diets of these species will remain mysterious. 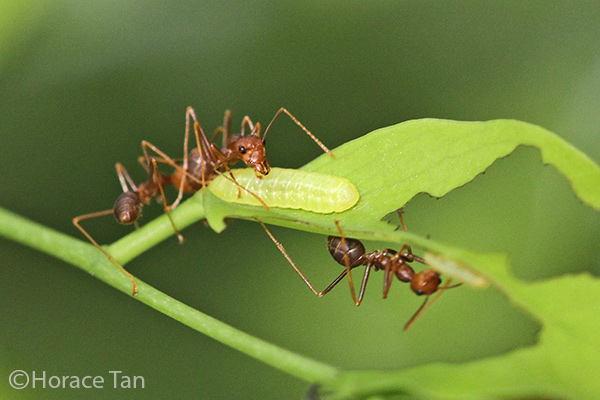 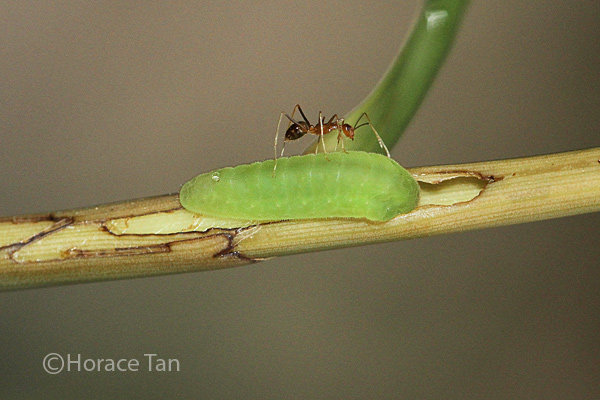 A late instar caterpillar of the Dark Tit (Hypolycaena thecloides). 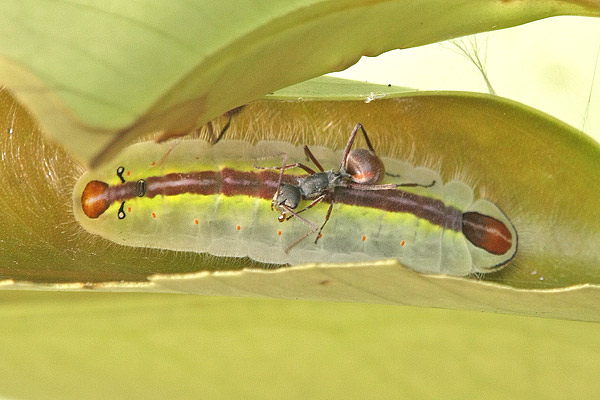 A final instar caterpillar of the Vinous Oakblue (Arhopala athada).


So, what exactly would we like to know about lycaenid-ant interactions, and why don’t we know it already? For closely ant-associated species, it can be difficult to access lycaenid larvae. Excavating ant nests to search for caterpillars is tough work, and not many people are so inclined to spend their leisure time being attacked by ants. Imagine spending your days opening up weaver ant nests to look for caterpillars--no thank you! But there is some really good stuff in there! The caterpillars of the Moth Butterfly (Liphyra brassolis), one of the coolest lycaenid species in the world, are found only inside weaver ant nests, and a few other lycaenid species have been found in these nests as well. My gut feeling tells me that if more crazy people were out there opening up weaver ant nests we'd be fascinated to find what other animals they host inside. We'd also have a lot of ant bites…. 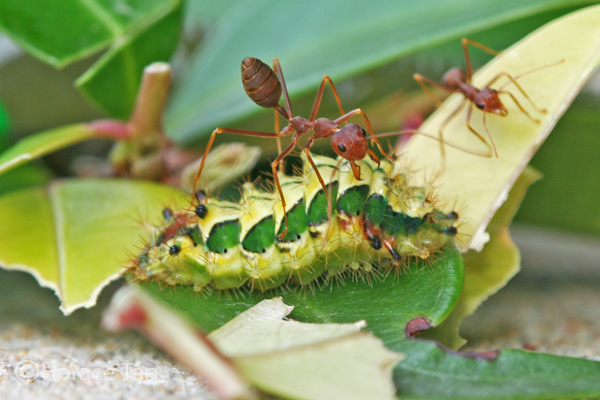 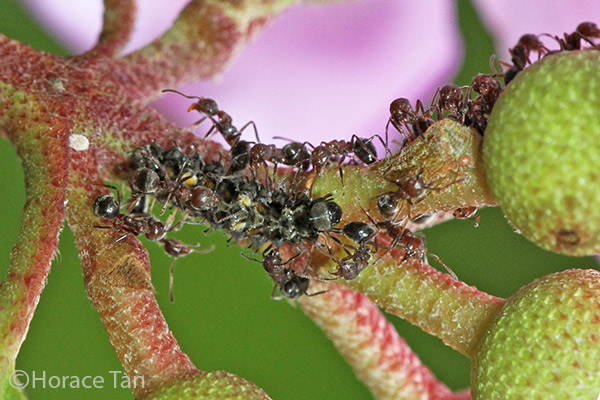 
But luckily we don’t need to scour every ant nest to answer important questions about lycaenid ecology. We can answer many outstanding questions simply through careful observation - something members of ButterflyCircle truly excel at. By documenting and keeping records of observed associations, we can start to fill in the gaps in our current knowledge. Below is a preliminary list of some easy ways in which the members of ButterflyCircle can contribute important ecological data about Singapore’s lycaenid (and even non-lycaenid) butterflies: 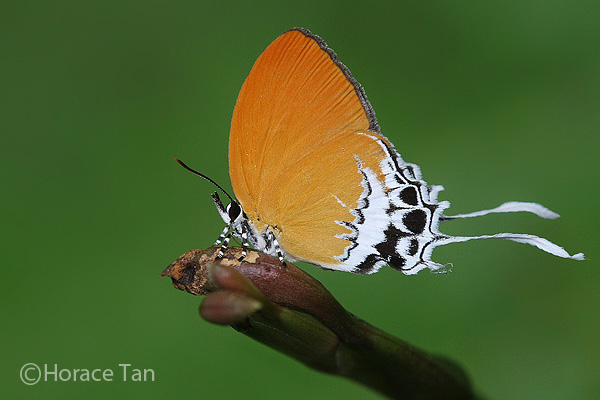 A Branded Imperial adult sipping fluid from the young shoot of its host plant. 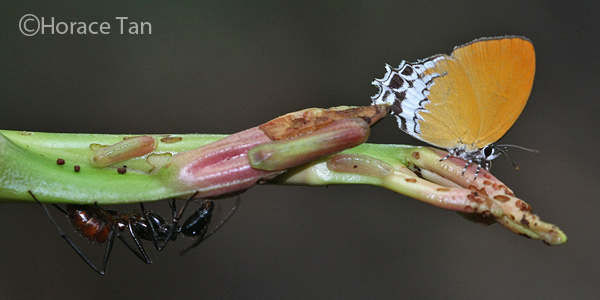 About the author:
Dr. Melissa Whitaker is a postdoctoral fellow at the Harvard Museum of Comparative Zoology, where she studies the evolution and ecology of ant-lycaenid associations. She recently visited Singapore to collaborate with Horace Tan on research focusing on Singapore's lycaenid fauna (funded by the Wildlife Reserves Singapore Conservation Fund). She is a huge fan of the ButterflyCircle’s approach to butterfly study and appreciation. For more information about Dr. Whitaker's research, or to contact her, please visit www.melissawhitaker.net.