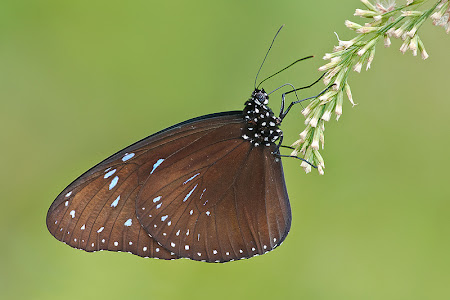 This Crow is the most commonly encountered species of the genus Euploea in Singapore, and probably the most attractive. The iridescent blue of the male's upperside forewings usually attracts the attention of observers. The female has less blue, but the striped hindwings is probably what gave this species its common English name. Males of this species are also known to puddle at sandy streambanks and forest paths.
The underside of the male is predominantly a chocolate brown with a variable series of white spots - some slightly bluish as well. This male Striped Blue Crow was shot by young ButterflyCircle member Jonathan Soong.
Posted by Commander at 8:43 AM 0 comments