Racing for Butterflies on a Saturday morning

Racing for Butterflies on a Saturday Morning
NParks Biodiversity Race 2010 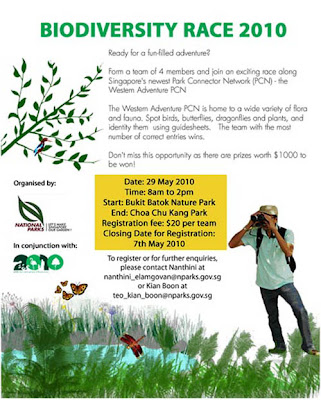 Last Saturday, 29 May 2010, veteran butterfly enthusiast Steven Neo and I were at the Chua Chu Kang Park as arbitrators for the National Parks Board's Biodiversity Race 2010. We arrived at the finishing point of the Biodiversity Race at around 11:00am (the participants were flagged off at 8:30am that morning). I must admit that it was the first time that I've visited Choa Chu Kang Park, and I must say that it's a nice size and has good potential for good butterfly activity. 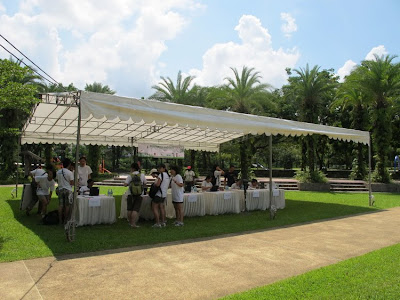 Participants making their submissions at the official end-point station

Coming back to the Biodiversity Race, the arbitrators had been briefed earlier about our roles, and there were four pairs of arbitrators, covering the bird, butterfly, dragonfly and plant groups, that the participants were competing to score points on. Each participating team had four members and had to survey a prescribed route and record a checklist of species of birds, butterflies, dragonflies and plants that they spot along the route. They were also encouraged to photograph what they see, and points awarded for photos with correct IDs. 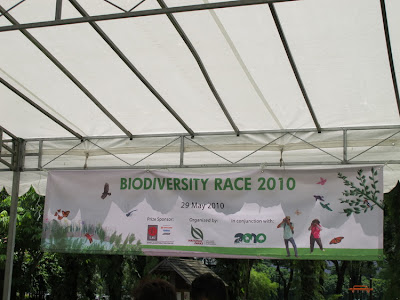 By the time the arbitrators had tucked in to a specially catered buffet lunch, the teams of participants had begun streaming in and reporting to the checkpoint coordinators who collected their observation sheets and storage cards for their photos. The whole process was well-coordinated and from the smiling faces of the participants (and the officials), everything went well without a glitch. 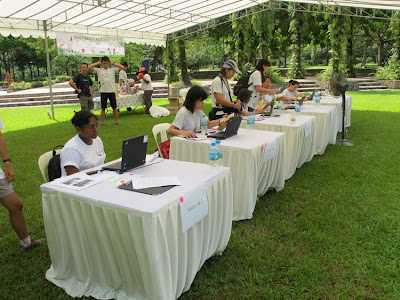 Race officials processing the submissions from the teams

The arbitrators then convened at the Information Kiosk to start the validation process of scoring points based on the criteria given - 1 point for a species (that is likely to be found in the competition route) and 2 points for a photo with the species correctly identified. During the process, the arbitrators agreed that if a photo was provided, but with a wrong identity of the species, then no points would be awarded. As the objective of the Biodiversity Race was to identify as many species as possible correctly, teams were therefore penalised if they had incorrect identifications. 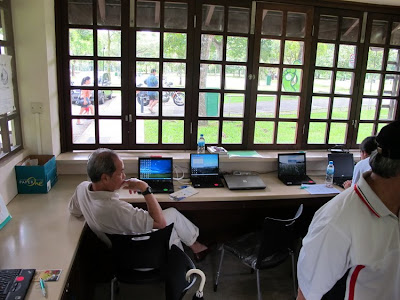 The Race officials thoughtfully provided enough notebook PCs for the arbitration process and the checking of checklists and photos by the arbitrators proceeded very efficiently. For the butterfly group, Steven and I were disappointed that even though a couple of shots of relatively rare butterflies were submitted, the teams had identified the butterflies incorrectly! For example, one of the teams featured a shot of a female Green Baron (Euthalia adonia pinwilli), but named it as "Lime Butterfly (Papilio demoleus malayanus)" instead! There were a few lookalike challenges. A classic example was the Malayan Eggfly (Hypolimnas anomala anomala), which many of the teams managed to photograph, but only one team managed to ID it correctly. The rest thought that it was a King Crow (Euploea phanaereta castelnaui). In a sense, the mimicry phenomenon worked as the Malayan Eggfly indeed evolved to mimic one of the Crows for protection against predation as part of their survival strategies, and fooled even human observers! 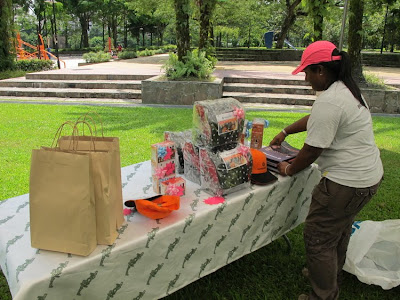 We had a moment of amusement when we evaluated one photograph that was cluttered with trees and bushes and an ID of "Common Birdwing". To give the benefit of the doubt to the team, we called the members in to help show us where the butterfly was. When the team came in, they could not find it either! Looking for a needle in a haystack came to mind as we scrolled up and down, left and right to try to find the elusive butterfly in the photo. But it was all in good spirit, and even the participants could not remember where exactly where the butterfly was in the picture! 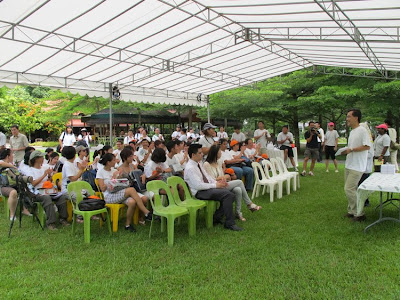 A few words from the Director, Parks Division, Dr Nigel Goh, before the winners were announced

After all the four teams of arbitrators completed their work the officials then tallied the points and we quickly went for the prize-giving ceremony, where the participants were already seated and anxiously awaiting the results. The prizes were giving out by the Director/Parks Division, Dr Nigel Goh. There were squeals of excitement from the participants as the winners were announced and prizes were handed out. The overall winning team had a rather decent prize of a good pair of binoculars each, donated by the sponsor. Prizes were also won for the best butterfly, bird and dragonfly of the Race. 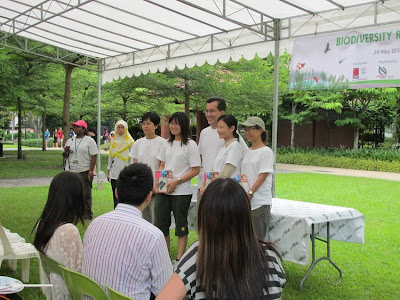 As far as butterflies are concerned, it was an eye-opener for Steven and me that the general nature-loving public is very much in need of a comprehensive field guide to help them ID butterflies in the wild. 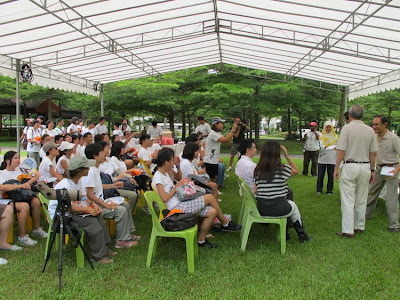 Arbitrators receiving their tokens of appreciation

It was a nice time catching up with friends in the nature community and we are encouraged to see many young (and young-at-heart) participants who enjoy nature and a day out to appreciate Mother Nature's creations.