Life History of the Fivebar Swordtail 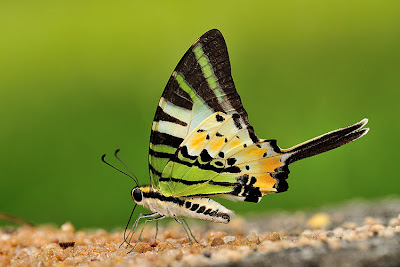 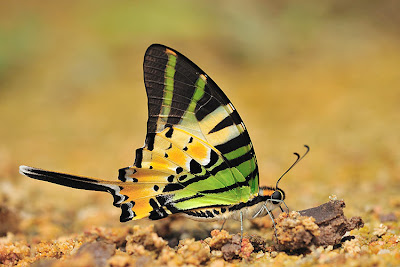 Physical Description of Adult Butterfly :
The Swordtails are remarkable for the very long, slender and tapering tail on the hindwing, resembling a long sword. They are forest butterflies and are very swift on the wing, with an erratic flight. They are often mistaken for a white Pierid butterfly, as the tails are usually not seen during flight. The ground color of the upperside is white with five short black costal bars crossing the cell. It has a long black tail edged with orange and a white tip. 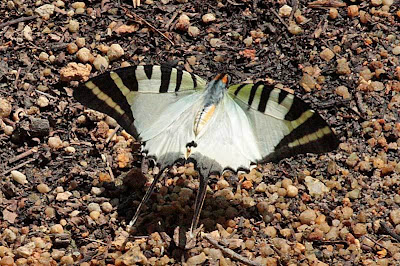 The markings of the underside forewing is similar to the upperside with green infilling the black bars at the postdiscal area. The basal area on the underside of the hindwing is green, with orange-yellow submarginal patches. It has 3 black basal bands series of black submarginal and marginal markings. The butterfly has 3 pairs of fully-developed legs and opaque jet-black eyes. The proboscis is also totally black. 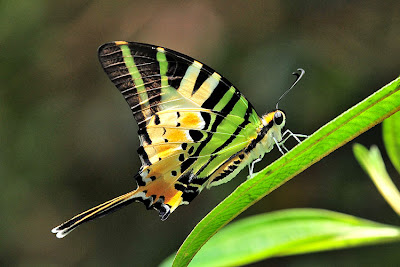 Field Observations of Butterfly Behaviour :
The Five Bar Swordtail is a medium size butterfly belonging to the Papilionidae family. It can be found in forested areas, riverbanks or the edges of the forest. It is a strong flyer with a rapid erratic flight. Often, it is seen flying high at tree top level.

It flies from flower to flower in search of nectar. Like the other typical Papilionidae s[ecies it has a characteristic flight when feeding at flowers, in that, whilst the forewings are flapping rapidly, the hindwings are held almost stationary as if to balance the butterfly perched on a flower as it sucks nectar from the flower with its long proboscis. Male Five Bar Swordtails are often observed puddling at muddy seepages and along river banks tainted with decomposing organic waste. 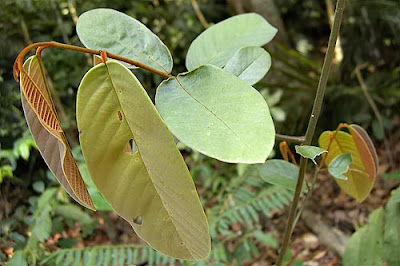 The hitherto unidentified host plant, probably of the Annonaceae family

The female lays an ovum singly on a young bud or on the undersurface of the young leaf of the host plant. The egg is smooth, round and creamy white in colour with a diameter of slightly over 1mm. 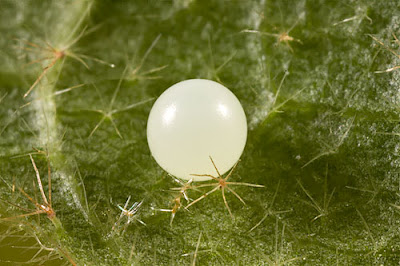 After about 3-4 days, the caterpillar hatches from the egg, and immediately starts to consume the eggshell completely. The caterpillar then starts to eat the young leaf that the egg was laid upon. The 1st instar caterpillar is about 3mm long, and has a spiky appearance. The body also features rows of short dorsal-lateral tubercles with long setae. The colour of its body is white with transverse darker stripes. As it feeds, the caterpillar usually stays on the middle of the upper surface of the leaf like the Tailed Jay. 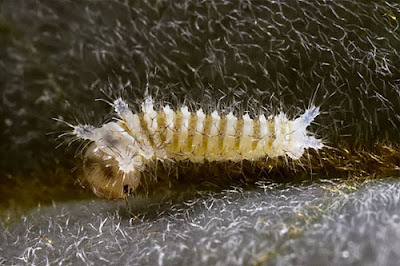 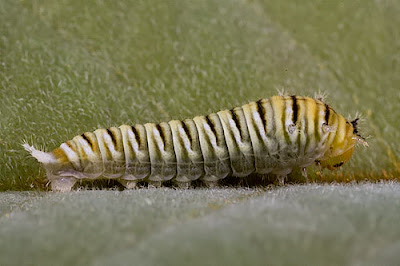 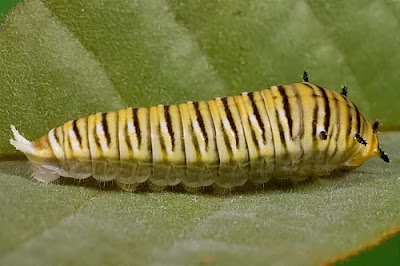 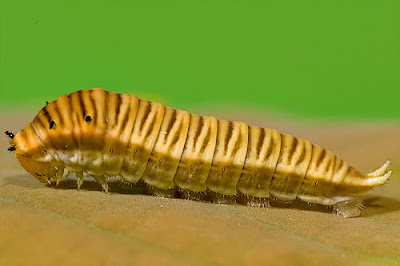 In the 5th and final instar, the ground colour of the caterpillar turns reddish brown with the striations rather indistinct. There are dark green circles at the base of the 3rd thoracic spines. The caterpillar eats voraciously for about 6 days to reach a final length of about 45mm. 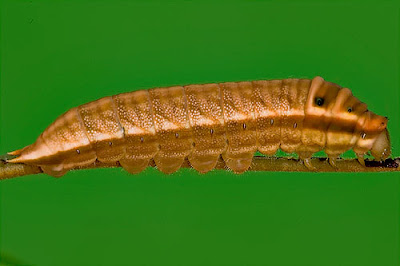 The pre-pupation stage lasts over a day, where the caterpillar spins a silken pad on which to anchor itself - usually on the undersurface of a leaf of the host plant or on the stem. The pupa is light green with a short projection at the front on its head. A silken girdle helps the pupa stay in an upward position. 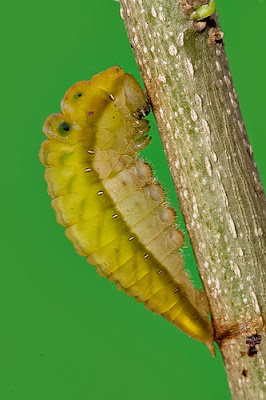 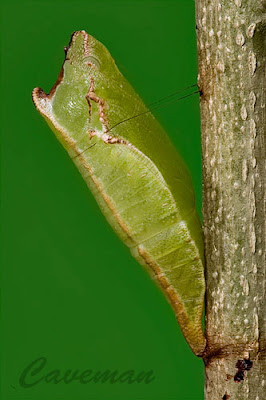 After about 12 days, the adult butterfly ecloses and emerges in the early morning hours, ready to continue its next phase of life as a spectacular butterfly. 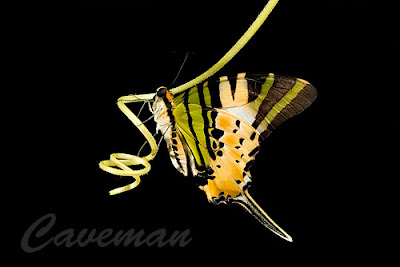 The Five Bar Swordtail's life history has eluded the Singaporean ButterflyCircle members thus far, and we thank our Malaysian member, LC Goh for sharing his record of this life history with us. It is hoped that we will eventually be able to identify the host plant for this species.

Posted by Commander at 9:51 PM 4 comments