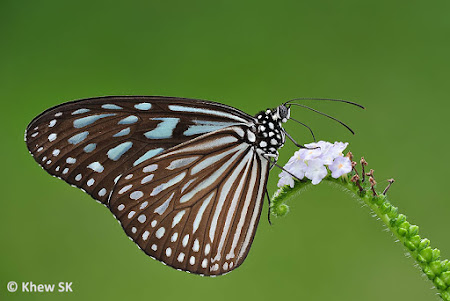 The scorching temperatures from last month carried forward into May, with only a little reprieve when there were occasional rainy afternoons which cooled us down somewhat. The 36.7ºC temperature recorded last month was the 2nd highest temperature ever recorded in Singapore! Many days in May continued to see 33-35ºC temperatures, which, when outdoors, felt more like in the 40's! The NEA reported that the El Nino effect is likely to weaken by mid year, with changes in weather patterns caused by the La Nina effect taking over. 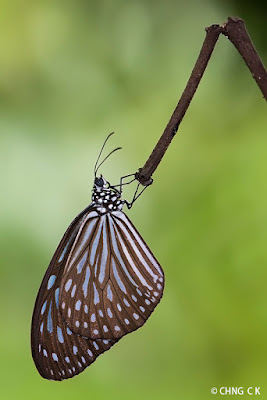 In the meantime, butterflying in Singapore can be a rather hot affair as the unforgiving weather takes its toll on both the butterflies and butterfly-watchers. The drying out of vegetation in many areas appeared to have an impact on butterfly population, particularly in the nature reserves. Whilst some species are subject to seasonality in their appearance in Singapore, there is a general drop in count and diversity of the forest-dependent species. 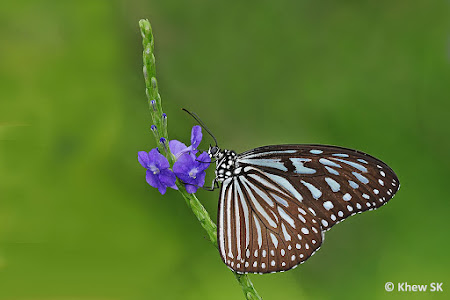 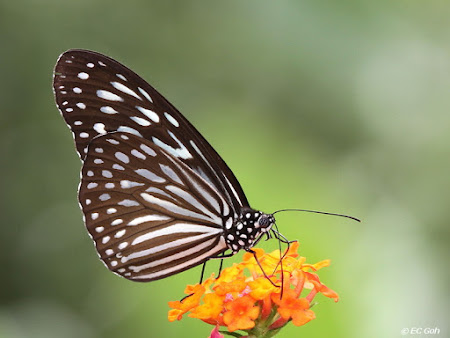 There is probably a strong correlation between new growth of plants (brought about by wetter weather) and the number of butterflies in the environment. Given that the weather has been hot and relatively dry in the first 4 months of the year, this may be one of the reasons for the lower butterfly counts in general. Urban species appear to be less susceptible and populations are generally stable. 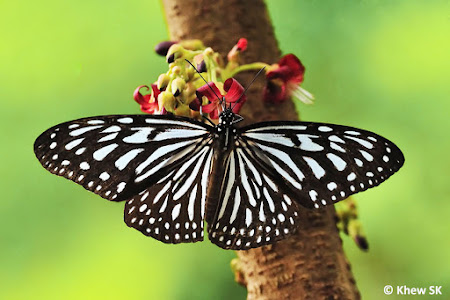 Singaporeans wait for the dreaded annual haze, usually coinciding with the dry weather and slash-and-burn season in neighbouring countries. Thus far, it appears to be under control, but for how long, no one can tell. At least there are now satellite images that would give a forewarning of forest fires burning out of control. But that is all that it can do - warn of the imminent deterioration in air quality. 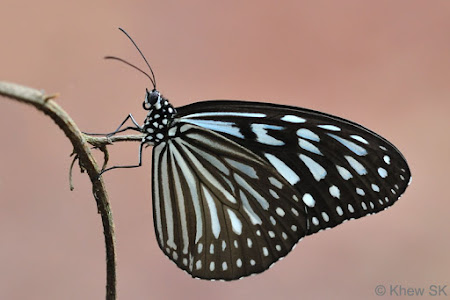 The general global economy is not particularly cheering anyone up either. Political battles in the form of a bye-election in Singapore and the Sarawak state elections in Malaysia resulted in definitive victories for the governments of the day with both the PAP and Barisan National winning their respective positions convincingly. Perhaps the voters chose to stand on the side of political stability of the governments in both countries in the face of the uncertain global economy. 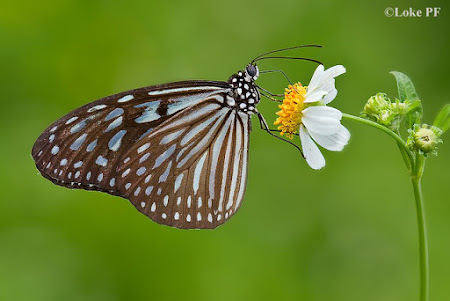 Over on the western front, our American friends are also in the thick of their own forthcoming elections by year end, as the Republican and Democrat candidates slug it out in the primaries. It would be interesting to see what happens at the end of the year, when the new President steps into the Oval Office. What would be critical to the rest of the world, would be the foreign policy in the hands of the incoming 45th President of the USA. 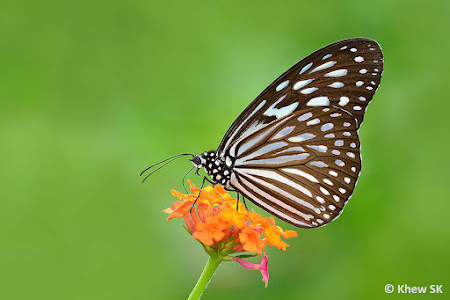 Our Butterfly of the Month for May 2016 is the common Blue Glassy Tiger (Ideopsis vulgaris macrina). This medium-sized butterfly with an average wingspan of about 75mm, is widespread and appears in urban parks and gardens, mangrove environments as well as in the nature reserves. 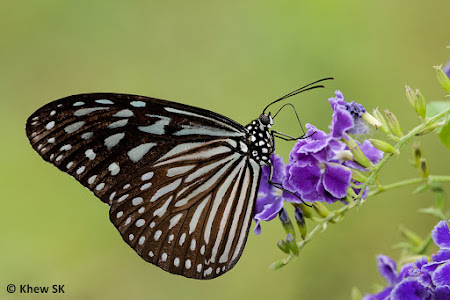 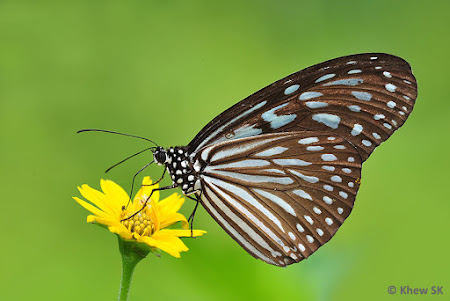 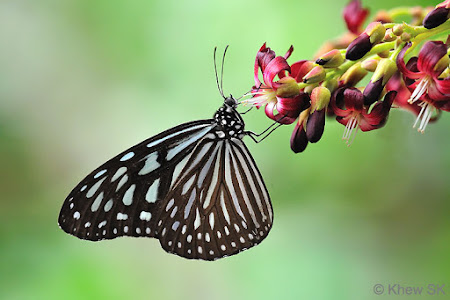 Blue  Glassy Tiger feeding on a variety of flowering plants

It is most common in habitats where its lactiferous host plants, Tylophora flexuosa syn. tenuissima, Gymnema sp. and probably other similar vines of the Apocynaceae family grow wild. These host plants are most evident in mangrove and wetland environments and this is where the butterfly, and its closely related cousin, the Dark Glassy Tiger (Parantica agleoides agleoides), which shares the host plants, can be found in numbers. 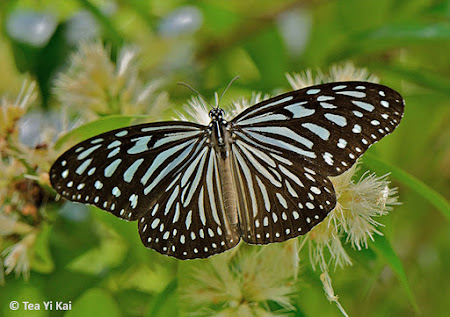 The Blue Glassy Tiger has wings that are bluish-grey, streaked with black stripes. The ground colour of the wings appear bluer in flight when compared to the Dark Glassy Tiger, which appears greyish. The black transverse bar in the forewing cell distinguishes it from the Dark Glassy Tiger. In recent years, another species - the Grey Glassy Tiger (Ideopsis juventa sitah) has been spotted in Singapore, and it is likely to be a migrant species for the time being. In this latter species, the cell areas of both wings are lightly marked, and it appears much paler in flight than either of the extant species. 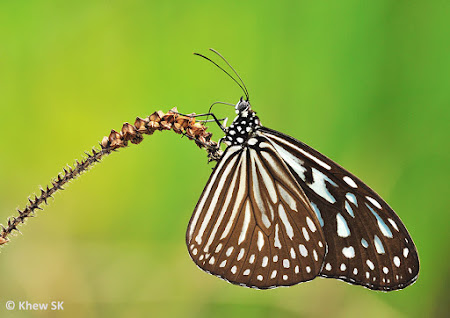 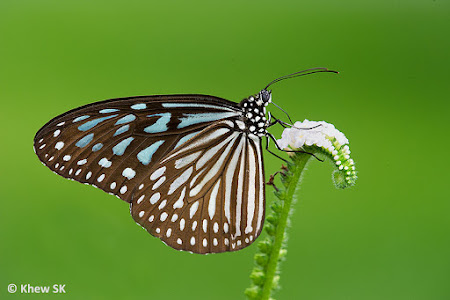 The Blue Glassy Tiger flies in an unhurried manner with a slow flying characteristic. It is often seen feeding on flowers of many plants, but is particularly partial to the dried plants of the Indian Heliotrope (Heliotropium indicum), which also attracts other Danainae butterflies. Males of the species feature a distinct brand (usually of a darker colour than the surrounding area) at the sub-tornal area of the hindwing. 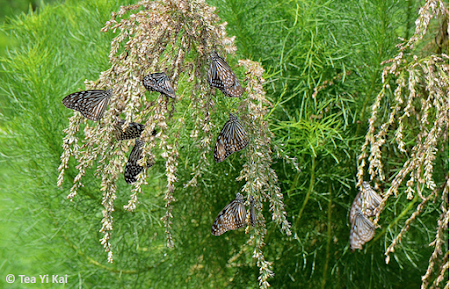 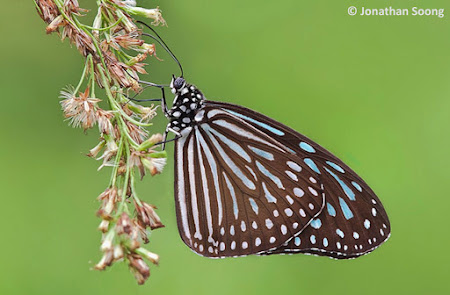 Besides the Indian Heliotrope, another plant, the False Dill (Artemisia scoparia) also attracts various species of Danainae. The butterflies are attracted to the flowers of the False Dill and dried or damaged parts of the plant. There appears to be some form of alkaloids that the Danainaes go for. The Rattleweed (Crotalaria mucronata) also attracts the Danainaes and the Blue Glassy Tiger is no exception. It can often be seen feeding on sap from the stem, leaves and seed pods of the plant. 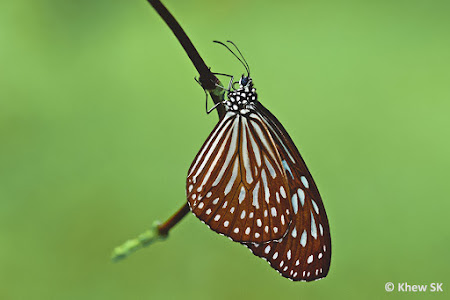 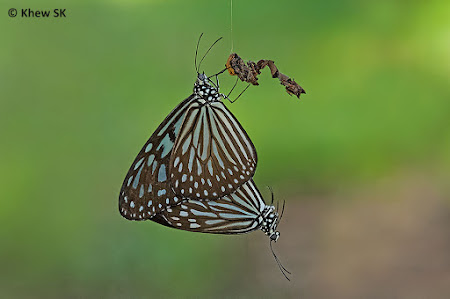 After feeding, a unique behaviour of the Blue Glassy Tiger is that it will look for heavily shaded areas to rest, clinging on to vines and thin branches under shade, keeping very still unless disturbed. The Blue Glassy Tiger has been successfully bred on the lactiferous vine, Tylophora flexuosa (syn. tenuissima). The spotted caterpillar sports red based tubercles and is quite attractive. 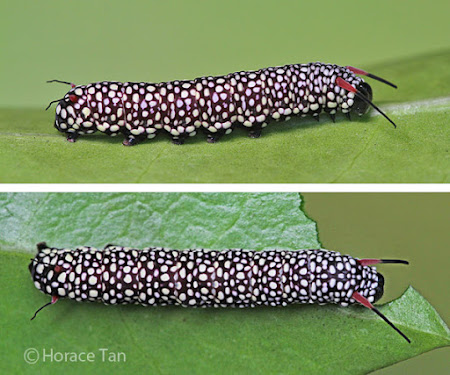