Re-discovery of two more species of Lycaenidae brings the Singapore Checklist to 284 species.

The recent re-discovery of two more species of Lycaenidae - one from the genus Nacaduba and the other from the genus Manto brings the total number of species in the Singapore Checklist to 284 species.
The Jewel Four-Line Blue (Nacaduba sanaya elioti)
The first species is the Jewel Four-Line Blue (Nacaduba sanaya elioti ). The genus Nacaduba comprise many species which look very similar to each other and are not easy to identify in the field. However, our ButterflyCircle member, Horace Tan, who specialises in the early stages of butterflies, managed to observe this species over a few months and managed to breed the species from egg to adulthood. 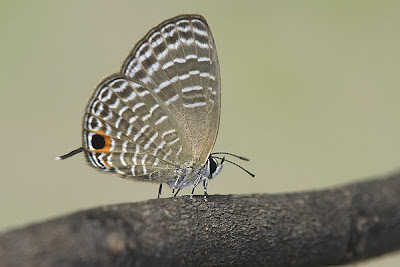 The pristine adult specimens were then compared with the reference books and it was discovered that this specimen was not similar to the other species already recorded in the Singapore checklist. This species, obviously belonging to the pavana group (the 4-line Blues) is also without a basal pair of lines in the forewing cell beneath.

A female Jewel Four-Line Blue oviposting on its host plant, and the leaves of the host plant of this species.

After careful investigations and seeking advice from our foreign expert, Prof Konrad Fiedler, a renowned expert in tropical Lycaenidae, it was confirmed that this species is indeed the Jewel Four-Line Blue (Nacaduba sanaya elioti). It is now re-instated into the Singapore Checklist, where it was originally recorded as extant by Corbet & Pendlebury as well as W. A. Fleming.
The Green Imperial (Manto hypoleuca terana)

The second species is the Green Imperial (Manto hypoleuca terana). Described as "rather rare and is more often taken in the forest at low to moderate elevations than on the hill tops", the species has been earlier observed, but only on this opportune occasion where a pristine male was observed with its characteristic green upperside, when the species could finally be positively identified. 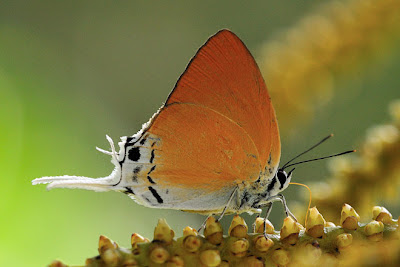 Photographed at the edge of the nature reserves feeding on the flowers of the Yellow Cane Palm (Dypsis lutescens), the fortunate encounter has confirmed the existence of this rare Lycaenid in Singapore, and the species Green Imperial (Manto hypoleuca terana) has been reinstated to the Singapore Butterfly checklist as species # 284.

Posted by Commander at 6:34 PM 0 comments