A new Riodinidae species for Singapore?

Is there a new Riodinidae species in Singapore?
Some time back in mid 2004, a small colony of what was first thought to be the Malayan Plum Judy (Abisara saturata kausambioides) was discovered at several locations at Singapore's urban hill parks known as the "Three Ridges". 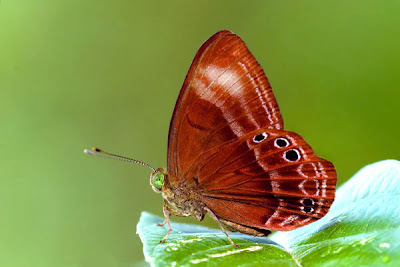 A side shot of the mystery Abisara sp.
After taking many shots of the species, ButterflyCircle member Sunny Chir noticed that the behaviour of the individuals of this species to be rather unique. As the individuals spotted had a much stronger flight and engaged in "dog-fighting" activity - quite uncharacteristic of the behaviour of females of the Malayan Plum Judy, which these individuals resemble, Sunny continued to observe their behaviour over a period of several months, and highlighted the possibility of a different Abisara species to me. 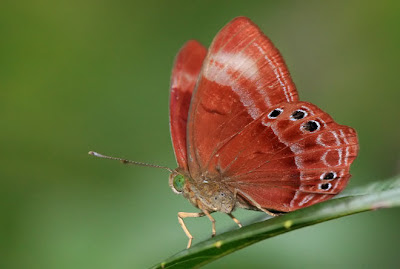 The mystery Abisara with half-opened wings, perched on a leaf
That initial "gut-feeling" resulted in a long period of observing this species in their natural habitat - the times during which the species is most active, and their frolicking behaviour when two or three other individuals of the species were around in the same place. Thus far, no mating pairs were observed yet. 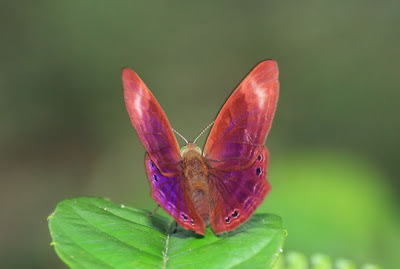 The mystery Abisara with half opened wings. In a side light, the upper wings show a purple-blue sheen.

Upon closer scrutiny of the photos taken, and by a process of elimination, we came to a tentative conclusion that this species may not be the Malayan Plum Judy (Abisara saturata kausambioides).
Taking reference from Corbet & Pendlebury's "Butterflies of the Malay Peninsula" 4th Edition, in the key for separation of the three extant Abisara species in Singapore we have : 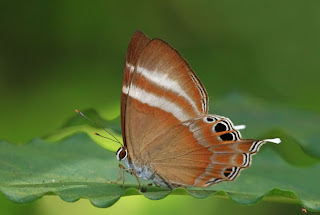 Abisara savitri - Upperside paler, more reddish brown; forewing with inner band diffuse, sullied and from beyond mid-costa to the dorsum before the tornus. Hindwing with a long, white-tipped tail at vein 4. 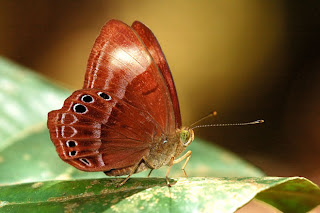 Abisara geza - Underside of forewing inner postdiscal fascia bent basad above vein 4. Underside of hindwing discal band dislocated at vein 4. Male upperside with ovate paler subapical area on forewing and submarginal spots in spaces 1b, 4 and 5 of the hindwing.


Abisara saturata - Underside of hindwing discal band not dislocated, but may be angled at vein 4. Male upperside dark crimson brown and unmarked.

Male and Female Abisara saturata kausambioides
The first Abisara species - A. savitri can be eliminated due to its very distinct and different appearance from the other two species.
Hence, the unknown species :


So the conclusion up to this point would be that this is a :
So what species is this?

Voucher specimens captured of this species suggest that, from the visual inspection of the end of the abdomen of the specimens, that these individuals are males. These specimens have been sent to expert lepidopterists in Japan and Malaysia for a full-fledged dissection to ascertain the identity of this species. We are waiting patiently for the conclusion of these experts. A journal paper has been prepared to this effect, for the purpose of recording this strange and unknown Abisara as well as other discoveries by ButterflyCircle members.
A possible ID of this species flying around the hilltops of Singapore's urban parks could be Abisara kausambi kausambi. The characteristic of "Underside of forewing inner postdiscal fascia straight" and "Male upperside forewing with narrow, obscure, paler subapical area" seems to suggest that this mystery Riodinid matches the description of Abisara kausambi kausambi. However, as this species has not been recorded in Singapore by the early authors, the ID of this species remains a mystery for the time being.
Could our mystery Riodinid be Abisara kausambi? Could it be an endemic sub-species which is hitherto unrecorded in Singapore? Or perhaps a totally new Abisara species which is not even recorded in the region?
Whilst the status of this species remains uncertain in Singapore, and we wait in anticipation for the experts' advice, we would like to place on record this observation which was first made by Sunny Chir. 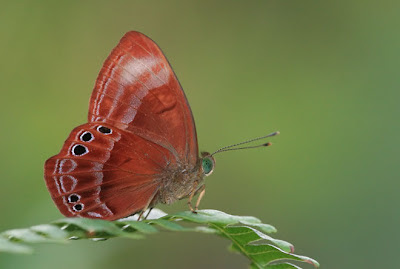