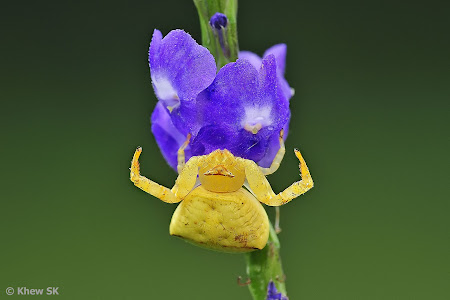 A Crab Spider (Thomisus sp.) lying in wait on a Purple Snakeweed flower


Despite the rather melodramatic title, it is well known that butterflies and their caterpillars form part of the food web in any study of animal ecology. Mostly seen as "prey", our flying jewels are almost at the base of the food pyramid and are often targeted as a source of nutrition by a wide range of predators from birds to lizards to spiders. 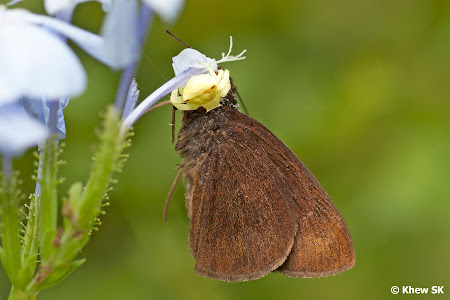 A Chocolate Demon that appears to be feeding on a flower, but is actually dead - a victim of a fatal spider bite


Butterfly watchers and photographers often encounter dead butterflies on flowers and sometimes wonder how the poor butterfly met its demise. Often, the "murderer" is hidden in plain sight, and still holding tightly onto its prize. One needs to look a little closer and the culprit is very likely to be a  well-camouflaged Crab Spider (Family : Thomisidae   Genus : Thomisus). 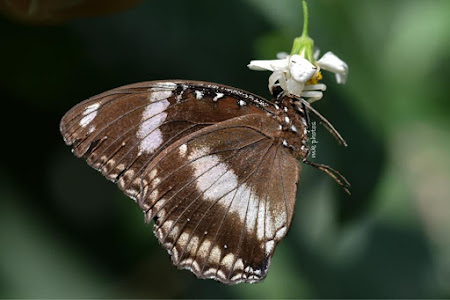 
This article explores the observations of some of our Singapore photographers who have come across such fatal encounters between various species of Thomisus spiders and their unfortunate butterfly preys. In quite a few of the cases, it would initially appear that the butterfly is still feeding on the flower, but the absence of any movement for some time would suggest that the butterfly may be dead. 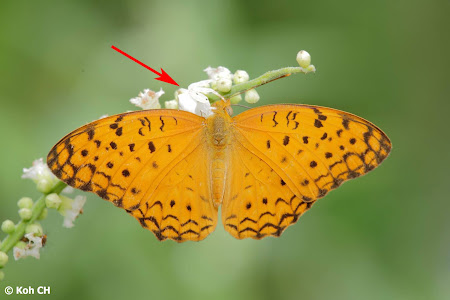 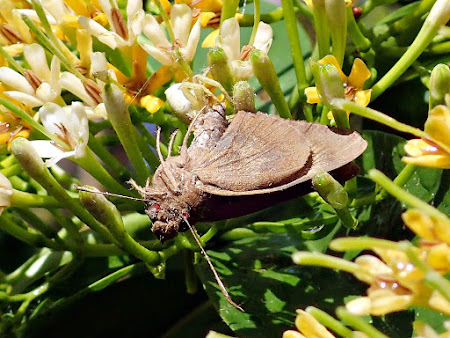 
The generic English name Crab Spider is used to describe over 2,100 species in 175 genera of spiders of the family Thomisidae. Most of these species of spiders in this family are not regularly encountered by our butterfly watchers. However, of particular interest are the species in the genus Thomisus and what we usually also refer to as "Crab Spiders" or "Flower Crab Spiders". 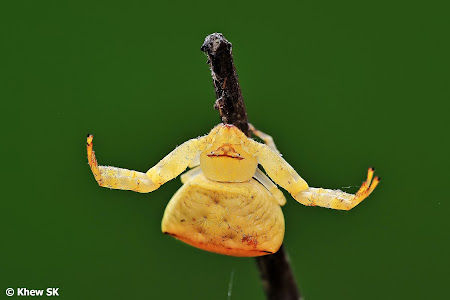 A Crab Spider (Thomisus sp.) with its aggressive "crab-like" stance when it is disturbed


According to online sources, there are globally about 150 described species in the genus Thomisus. The genus includes species that vary widely in their behaviour and ecology. However, like several other genera in the family Thomisidae, their English common name of Crab Spiders probably came from their crab-like motion and their way of holding their much-longer front legs, reminiscent of a crab spreading its claws as a threat. 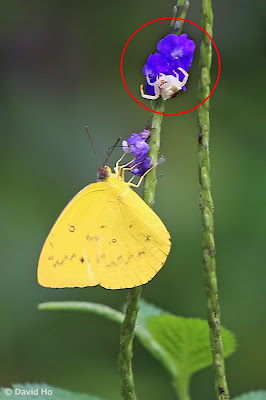 Danger lurks above! An unsuspecting Orange Emigrant feeding on the flower of the Purple Snakeweed.  Its next stop may be its last!

Crab spiders are considered hunters (as opposed to spinning a web to capture their prey). However, the vast majority of crab spiders are not active hunters that vigorously chase down and kill their prey. The Thomisus crab spiders prefer to sit camouflaged amongst flowers until an unsuspecting prey wanders too close whilst feeding. The strong clawed front legs of the crab spider then quickly reach out and grab the butterfly and inject them with immobilizing venom, hardly moving their body or shorter back legs at all. 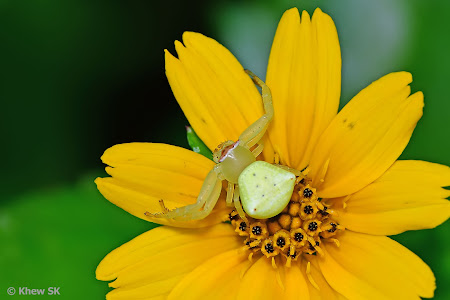 A Crab Spider (Thomisus sp.) waiting on the flower of the Singapore Daisy for its next prey 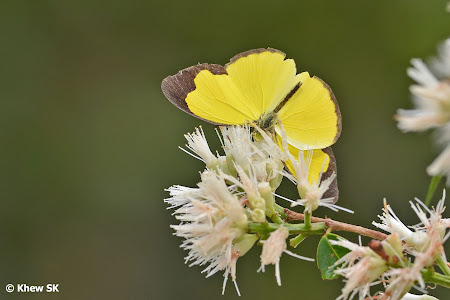 The bushy flowers of Syzygium sp. are ideal for the Crab Spider's concealment as it strikes at the 3-Spot Grass Yellow 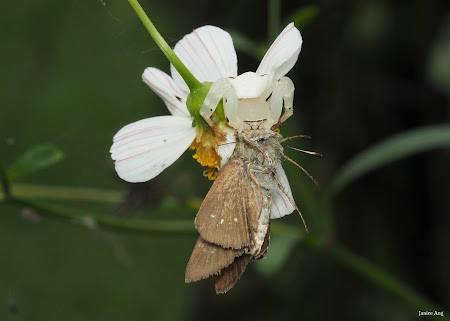 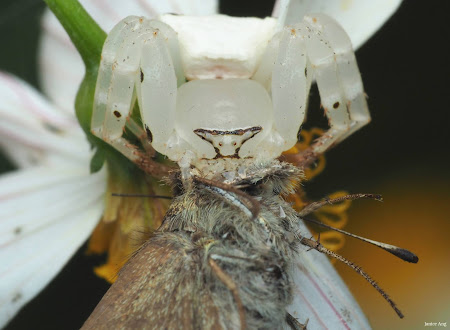 Another interesting point about these Crab Spiders is that quite a few are brightly coloured, and are even able to change their colour to match that of the flower that it is hiding on! Talk about chameleon colour-changing capabilities in a spider! The small ones that we see in Singapore are not harmful to humans, but is able to bite if threatened. There are about 45 species of Thomisidae species in Singapore, according to local spider expert Joseph Koh. 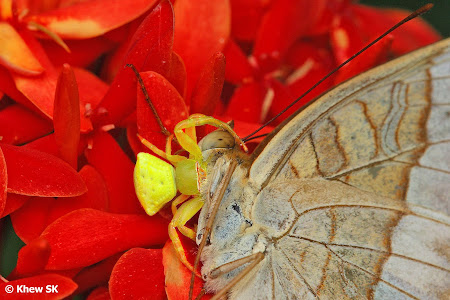 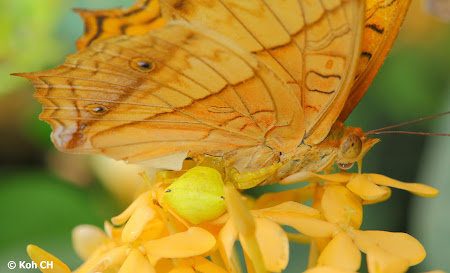 A meal fit for a king - Crab Spiders with large prey like the Cruiser - Top : Female   Bottom : Male 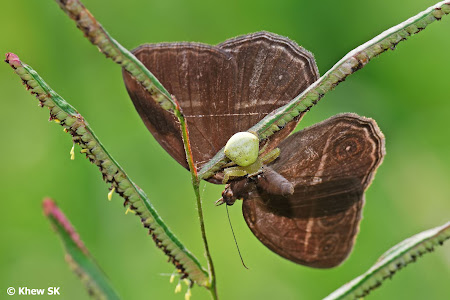 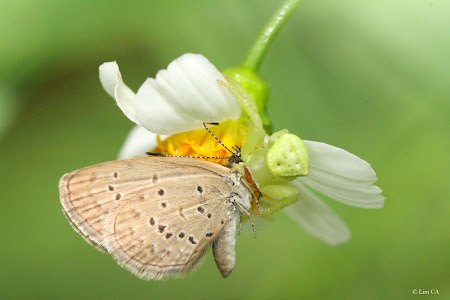 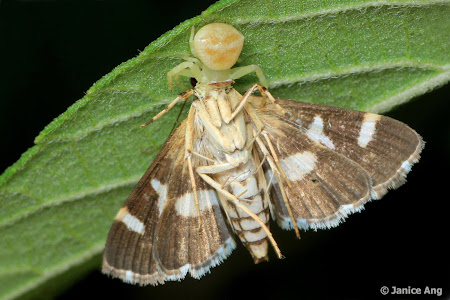 When there are no butterflies for a meal, a moth will also do!

From the variety of butterfly species that have been killed, the Crab Spider does not pick and choose which prey to attack. Whatever comes its way - bees, ants, moths, butterflies, will be fair game for it. Even size does not matter! From the tiny Lesser Grass Blue to large butterflies like a Common Mormon or even a Cruiser, the Crab Spider will find a juicy meal. 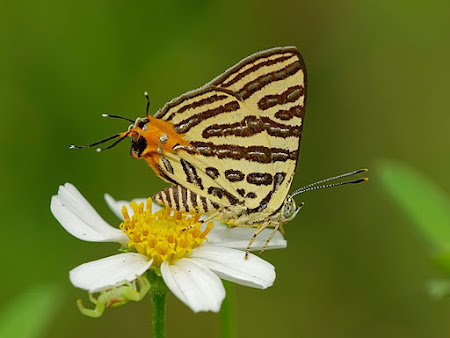 Danger lurks below! A Crab Spider waiting for the right moment to strike as a Club Silverline perches unaware of the killer spider just millimetres away

The momentary distraction that a flower's nectar offers to a hungry butterfly is enough time for the Crab Spider to sneak up on the unsuspecting butterfly to grab it. Hence whether it is a fast-flying Skipper or a large and robust Cruiser that is many times the size of the spider, the distracted butterfly is vulnerable. There is probably enough venom in the spider's bite that can easily immobilize a prey of any size - provided the spider can hang on to it long enough, whilst the venom paralyses the prey. 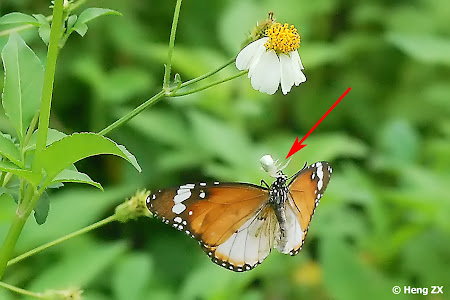 Distasteful species like the Crows and Tigers are fair game as far as the Crab Spider is concerned.  The toxins in these species do not seem to affect spiders.

Another observation is that the aposematic colouration and distastefulness in butterflies that feed on toxic plants that endow them with "immunity" from predators like birds, do not apply to spiders. Hence there are equally as many "distasteful" Crab Spider victims as there are other species of butterflies, like the Plain Tiger shown above and other Danainaes. 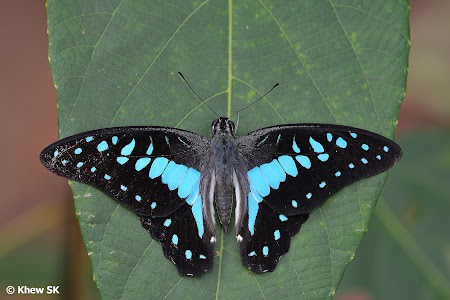 And the one that got away.... almost.  A dead but relatively pristine Lesser Jay found near where a number of Crab Spiders lay in wait at a flowering Syzygium tree.  This one must have been bitten, but manage to get away before the venom paralysed it. But it did not fly far before it succumbed to the Crab Spider's venom, and died.

In some cases, the butterfly victim still manages to get away from the clutches of the Crab Spider, despite being bitten and poisoned. However, it is not likely that the prey will be able to fly far, as the spider's venom starts to work. This could explain why some dead butterflies are found with their wings intact and not damaged at all.

Posted by Commander at 4:00 PM