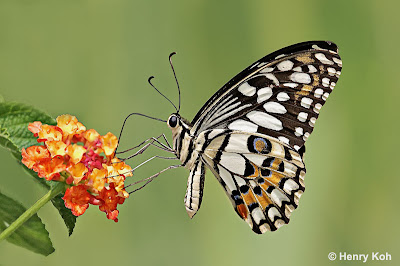 Several butterfly species of the Papilionidae family are known for their distinctive flight characteristic - whenever they alight at a flower to feed, the forewings of the butterflies flap rapidly, whilst the hindwings are kept relatively still. Shooting and freezing these butterflies in action can be considered one of the most challenging pursuits in the field of butterfly photography. 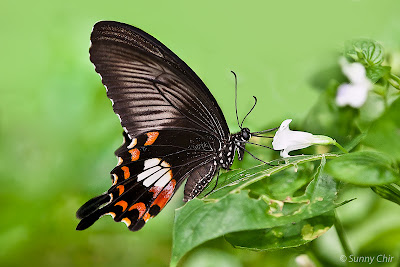 Unlike species of other families which stop and remain momentarily stationary to feed on flowers with their wings folded shut or opened flat, Swallowtails are hence quite challenging to photograph whilst feeding at flowers, due to their constant motion. 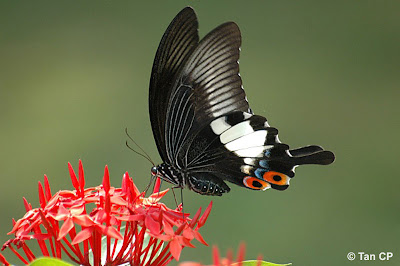 A Great Helen balances on Ixora flowers as it feeds

Swallowtails from the Papilionidae family are large and attractive butterflies, although many species do not have tails. Most of the species found in Singapore are relatively common, with the exception of a few. They belong to the genera Papilio, Chilasa, Graphium, Pachliopta and Pathysa (Graphium). 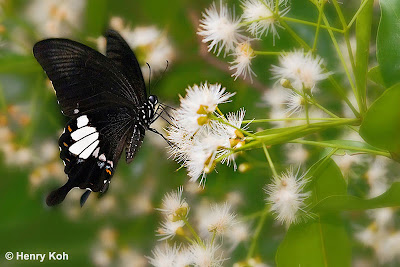 Many of the species in the genus Papilio are restless flyers, and when in flight, are extremely challenging to photograph. However, when they alight to feed on flowers, this gives the photographer the best opportunity to get close and take shots of them. 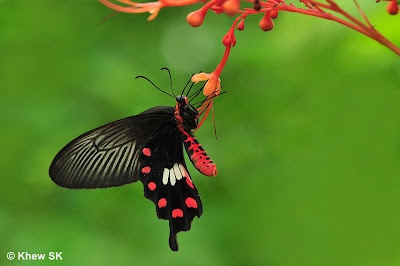 A Common Rose balancing itself whilst feeding on a Pagoda Flower

However, as they are always fluttering and on the move, getting the ideal shot of the butterfly on a flower depends on quick preparation and anticipation, coupled with a combination of skill and luck. The feeding butterfly is always alert for predators, so any sudden movements by the photographer would spook the butterfly off and spoil any further chances of photographing it. 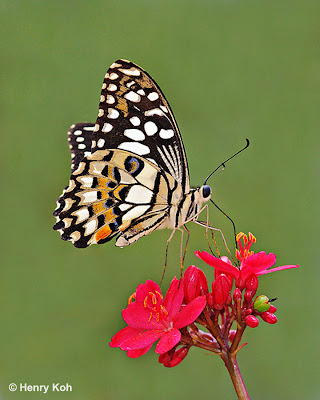 It is always a delight to see a Common Mormon or a Lime Butterfly, with its legs extended, proboscis probing into a flower to drink the nectar, and wings outstretched. However, such shots are often split-second opportunities in butterfly photography. In the field, the photographer has to get into position at a flower and anticipate the next flower that the butterfly is likely to visit, focus on the flower and get ready to re-focus as the butterfly comes into view, and let off a series of shots at the opportune moment. 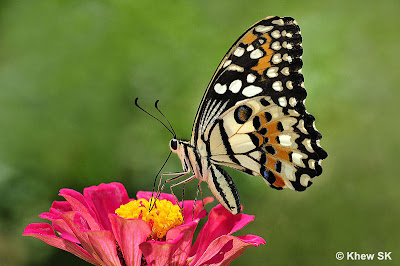 Freezing the action is where digital SLRs have an advantage; particularly those with a high frame-per-second rate (referred to as fps). The high end DSLRs have a frame rate of anything between 8-12 shots per second. This helps to even the odds of trying to shoot a butterfly that is in flight, constantly moving and alighting at a flower to feed for a fraction of a second. 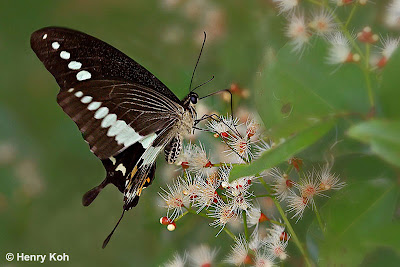 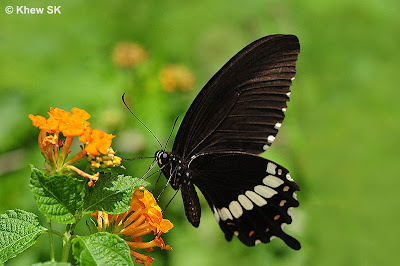 When tracking a feeding Swallowtail, observe which flowers it prefers to feed on. Often the butterfly tends to do a "circuit", visiting certain favourite flowers and then coming back to the same flowers for another round of nectar. Position yourself at a few preferred flowers and then focus your lens on that flower, keeping watch over the butterfly that is busily feeding nearby. When it comes into view, blast away! 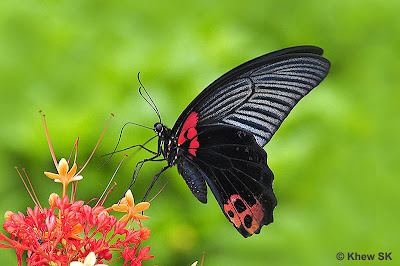 A feeding Swallowtail typically spends less than a second at the flower. The accuracy with which it extends its proboscis and inserts it into the flower and sucks the nectar is quite amazing. It does this whilst balancing itself with its flapping forewings and using its legs to hold on to the flower. 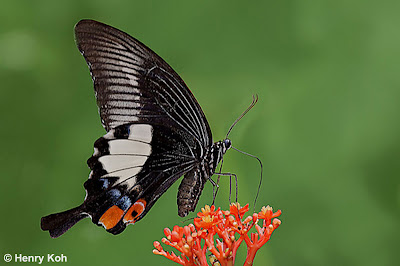 A Great Helen feeds on the flower of Ixora sp.

As the forewings are flapping constantly, try to position yourself in plane with the butterfly's wings to maximise your depth of field. Hold your camera and lens steady, and refrain from any sudden movements that would scare off the feeding butterfly. Two for the price of one! A male Lime Butterfly courting a female as she feeds on a Lantana flower

For species like the Lime Butterfly, Common and Great Mormon, where the wing flap rate is slower, a shutter speed of at least 1/500s and above would be ideal to freeze the wing movement. In situations like these, it may be necessary to use a higher ISO to ensure that the shutter speeds are maintained so that the flapping wings can be frozen (unless the photographer intentionally wants to feature motion of the wings in his shot) 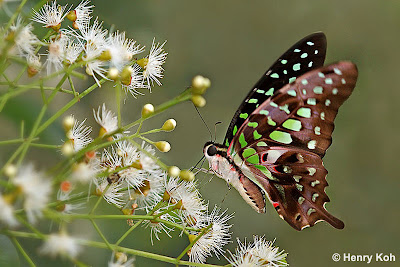 The faster flying species like the Tailed Jay, Common Bluebottle, Blue Jay, Banded Swallowtail and so on, often require shutter speeds of 1/800s or more and very fast reflexes on the part of the photographer to nail a good shot. 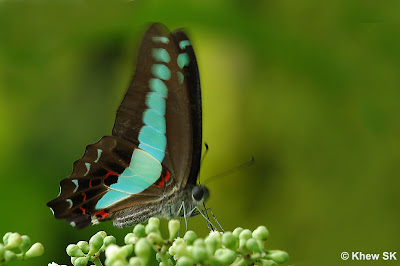 A Common Bluebottle feeding at the flower of the Bandicoot Cherry (Leea indica). Note the rapid movement of the flapping forewings

These species fly at very high speeds as they move from flower to flower. Frequently, all the frustrated photographer gets, is a fleeting glimpse of the butterfly as it zooms past at breakneck pace. 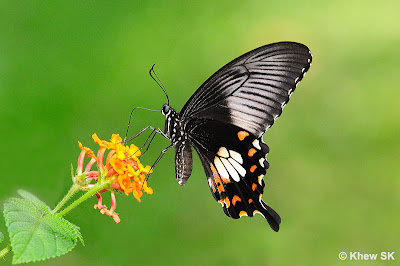 An ideal shot of a Swallowtail, with proboscis extended into a flower, wings frozen in space, with a clean out-of-focus background is a satisfying achievement, and one that is not easy to get. However, if one is patient and persistent, (and with a good dose of luck) it will be a most rewarding experience to photograph an in-flight Swallowtail feeding at a flower. 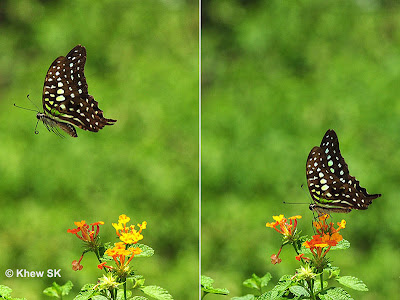 Now you see me, now you don't! A Tailed Jay zooms past, stops at a Lantana to feed and takes off, all within half a second.