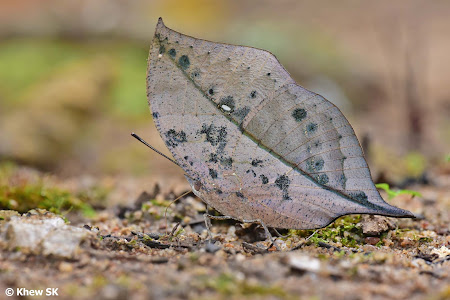 
Certain species of butterflies adopt various means and ways to fool predators so that they can avoid being attacked and ending up as some other animals' lunch. In previous blogposts, we saw some survival strategies that are employed to avoid predation. These vary from aposematic colouration, mimicry, camouflage, crypsis, masquerade and decoy tactics. In this weekend's blogpost, we take a look at how certain species of butterflies mimic dead leaves to avoid being detected by predators. 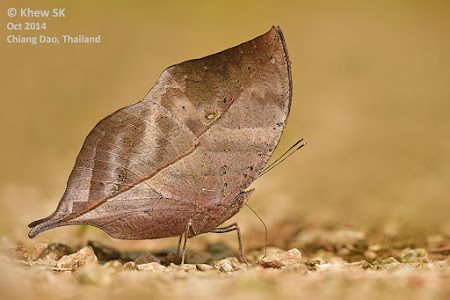 Amongst Asian butterflies, a small number of species have evolved and adapted to resemble dead leaves as they hide amongst vegetation to avoid being spotted. Amongst the most well-known are the ten or so species from the genus Kallima. Collectively called the Dead Leaf, Oakleaf or Leaf butterflies, these species masquerade as dead leaves when their wings are folded upright. 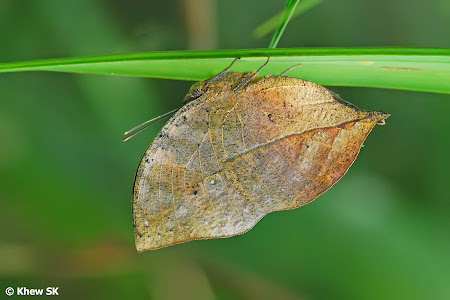 
These species adopt the strategy known as masquerade mimicry whereby the butterfly's wing has evolved to promote concealment through protective imitation of other benign objects. Masquerade mimicry is considered a slightly different tactic of concealment from crypsis because it "obstructs recognition rather than avoids detection" (Natural Selection and Beyond : The Intellectual Legacy of A.W. Wallace, Oxford University Press, 2008) 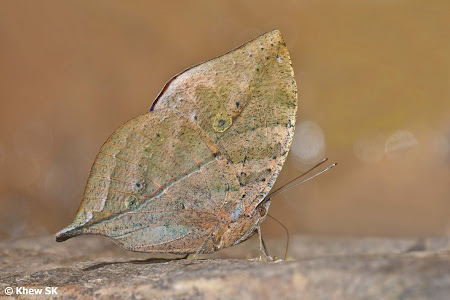 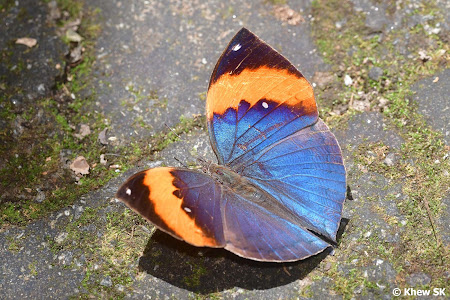 
Of the Kallima species, The Leaf Butterfly (Kallima limborgii amplifura) flies in Malaysia. References indicate that this species was found in Singapore prior to the 20th century but is considered extinct today. However, the Leaf Butterfly is not rare in Malaysia and southern Thailand, where the subspecies limborgii flies. Further up north in Thailand and across to India, a species called the Orange Oakleaf (Kallima inachus) can be commonly found. Over to the west, in Sumatra, the species Kallima paralekta is the native species, whilst over in Borneo, the species Kallima buxtoni is found. (In some literature, this species is considered the subspecies buxtonii of Kallima limborgii rather than a distinct species) 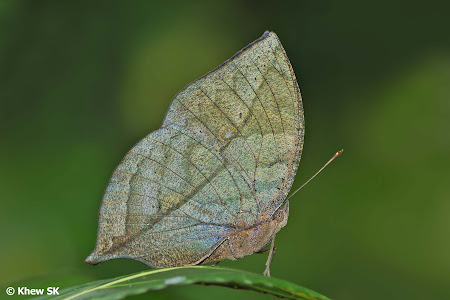 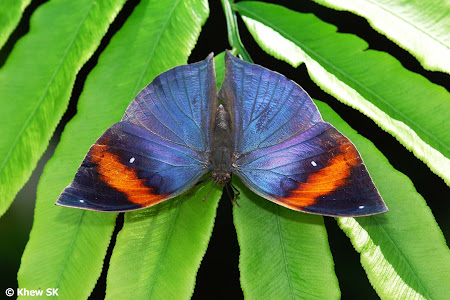 
In the field, encounters of various species of the Kallima species are often in the shaded forest understorey. These large butterflies tend to forage amongst leaf litter or puddling at muddy footpaths. They perch with their wings folded upright, masquerading amongst the dead leaf litter to conceal their presence. At times, they flap their wings open and shut, displaying their attractive and colourful uppersides. 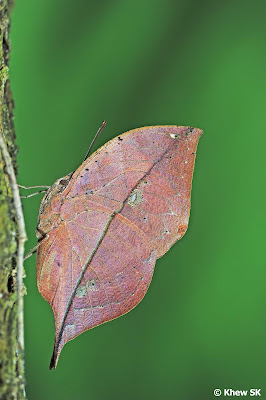 An Orange Oakleaf perched on a tree trunk.  Complete with leafy look, mid-rib, leaf stalk and "fungus" spots on its wings


The evolution of the Leaf Butterfly is such that the wings resemble a dead leaf - complete with curved wingtips, a prominent "mid-rib", to the leaf stalk in an adaptation of the tornal area of the hindwing, secondary leaf veins and even blemishes and fungus on the wings! When it perches on a twig or the trunk of a tree, it masquerades as an innocuous dead leaf and makes itself difficult to spot. 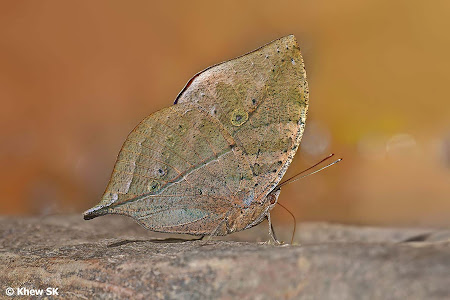 The upperside of the wings is a different matter altogether. It is likely that this amazing display of colours and iridescent blue scaling is meant to attract a mate or call attention to itself when there are reasons to do so. Although the butterfly remains effectively camouflaged when it chooses to, there are times when it is seen to open its wings to sunbathe and in the process, probably tempting fate if there are potential predators lurking around. 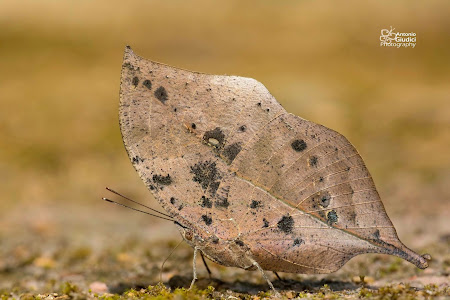 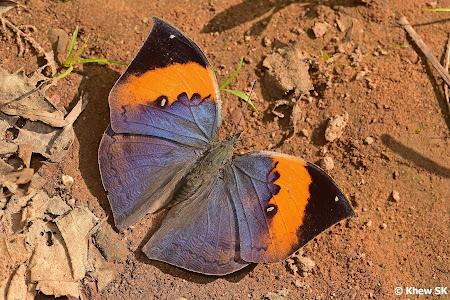 
Articles on the Internet have alluded to dry and wet season forms of Kallima where the patterns and colours of both the upper and undersides of the butterfly's wings are different, to match the ecological and environmental characteristics of the weather's effect. 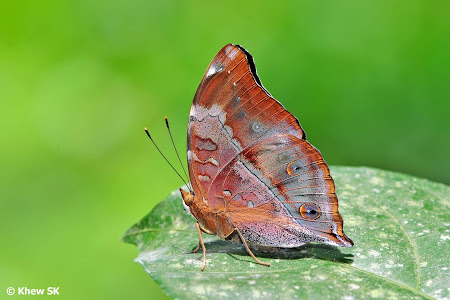 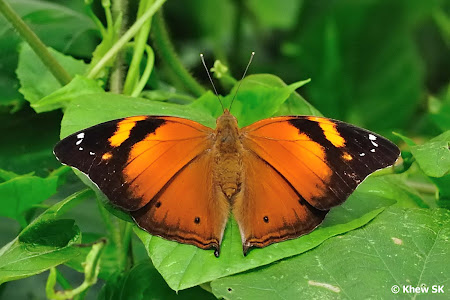 Autumn Leaf - under and uppersides


There are several other species of butterflies that have adopted masquerade mimicry and attempting to resemble dead leaves, but none are as effective or successful as the Kallima species. However, an associated species, the Autumn Leaf (Doleschallia bisaltide), which flies locally in Singapore and is quite a geographically-widespread species across Asia, is considered a good example. 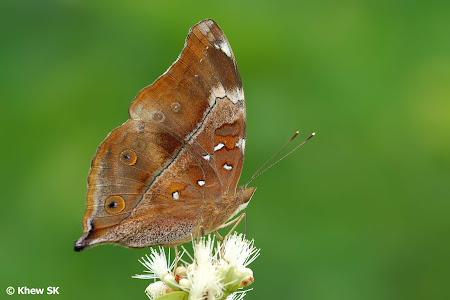 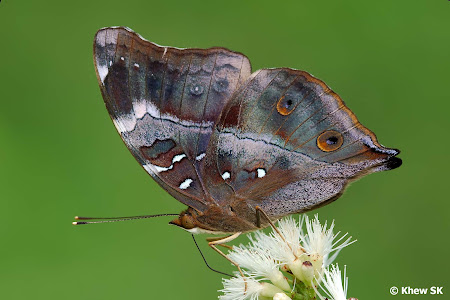 Variations in colouration of the Autumn Leaf


The Autumn Leaf adopts a similar strategy of resembling a dead leaf with a mid-rib, leaf stalk and blemishes and patterns that can be considered a good mimic of a dead leaf. When perched amongst leaf litter or shrubs, this adaptation is quite successful in camouflaging the butterfly from the eyes of a would-be predator.


Although the Leaf Butterfly was once recorded in Singapore, it is now considered extinct. Hopefully, it will one day make its return to this little island and make its home here once more.