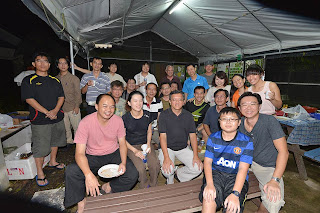 
It was a dark and stormy night.... Well, the weather was not quite conducive on that Good Friday evening, 29 Mar 2013 for an alfresco barbecue party. But first. let's rewind the clock to some time late last year when we were talking about having a long-overdue gathering for ButterflyCircle members. Since the group was formed, we had a 'grand' number of only two big gatherings, both barbecues, at member Henry Koh's condominium in Aug 2008 and then a more recent one at Oh Farms when it was first set up. So it was about time we had another gathering soon.  Federick Ho suggested Good Friday as it was a public holiday and a long weekend. 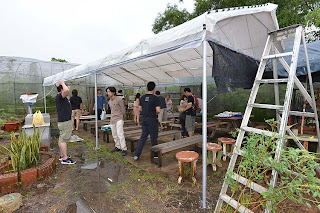 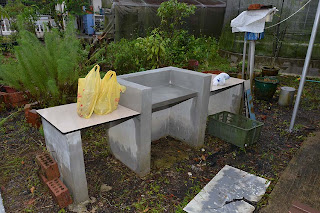 Rain stopped, time for some action and food!  The BBQ pit at Oh Farms all ready for its maiden barbecue function


Preparations began and thanks to the super-efficient folks at Oh Farms, most of the yummy food was prepared and all the rest of us needed to bring were light snacks, drinks and not to forget beer, and our insatiable appetites! All in all, we had 22 members, the Oh Family and a few other guests making up a nice group of over 30 people who attended the barbecue. 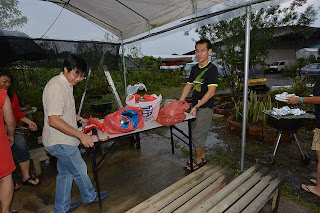 Whilst some members chipped in to help set up the tables and food, others were too hungry to resist the yummy dinner! 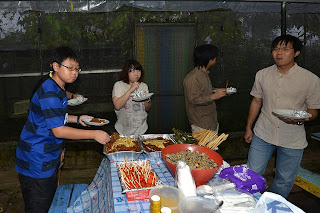 So who has the chubbiest cheeks??


It was ButterflyCircle's biggest social gathering so far - young and not-so-young, newbies and veterans, guys and gals. A few members, who were out of action for some time, also made the effort to join in.  After a morning butterfly shooting outing for some of the regulars, everyone was looking forward to the barbecue, when the skies decided to unleash its fury around late afternoon. It was a fierce tropical thunderstorm, complete with thunder and lightning. 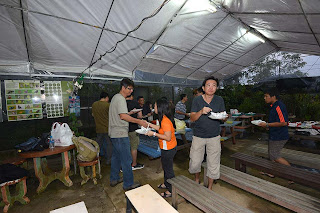 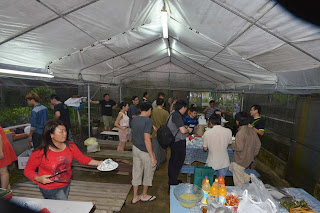 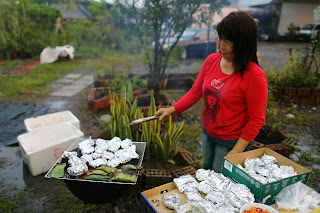 Makan time!!  And our chef-du-excellence, Nancy, who kept the food coming along


Those of us who arrived early at Oh Farms were entertained in an nice airconditioned room and waited anxiously for the rain to stop. Whilst there was a wet-weather contingency plan, having a barbecue indoors won't be quite the same. Fortunately, at around 6:30pm, the skies cleared up to a nice cool and humid evening.


Looking around the happy faces amongst the ButterflyCircle members that evening brought my mind back to late 2005, when the group was facing internal differences amongst some of the founding members. Eventually, a few of the more troublesome members were purged and the remaining group, which formed the majority of the members, split off to start a new group. I also recall that some time in Nov 2005, we had an online brainstorming session amongst the pioneer group members to find a new name for the group. 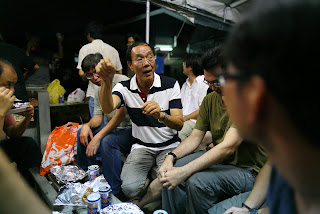 
On 17 Nov 2005, it was decided that the group be called ButterflyCircle. A domain was registered and after the requisite administrative applications were cleared, we were good to go! Originally, most of the members started off as macro photographers with a special interest in butterflies. Many were also members of a local photography forum, Clubsnap, who eventually joined ButterflyCircle and focused their efforts on butterfly photography and learning more about our winged jewels. 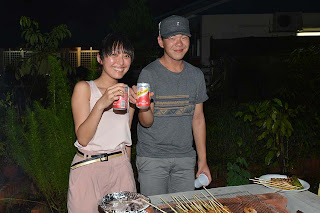 Over the years, the group grew in numbers as new people joined the forums, outings and social gatherings. We even had overseas members joining in the forums, and experts in specialised fields like early stages, identification and so on. Special mention has to be made of Dr TL Seow from Malaysia, who has been exceptionally invaluable for his knowledge in butterfly identification and sharing his experience with ButterflyCircle members. From our closest neighbours in Malaysia and Thailand we also have active members like Antonio Giudici, Les Day and LC Goh, with whom the Singapore members have often met up on outings in Malaysia and Thailand, and even further afield in other Asian countries. 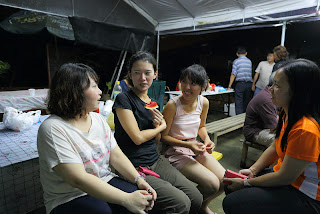 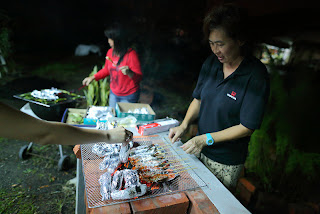 
Then there are members from US, Hong Kong, India, Japan and other countries who pop in regularly to discuss topics related to butterflies. Of special mention are Keith Wolfe and William Folsom from the US, and David Fischer from Australia, who have contributed their time, knowledge and encouragement from time to time. Our 'sister' group, the Hong Kong Lepidopterists Society, visited us in June 2011 and they have reciprocated the hospitality to several ButterflyCircle members who visited Hong Kong. 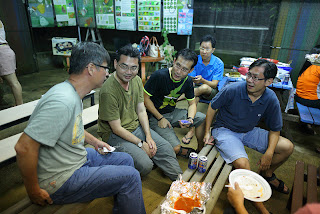 
In the seven years that ButterflyCircle has been in existence, the group has continued to further its research in butterflies, and sharing information across the globe via its forum, blog and Facebook portals. The group also learned a lot of new things from others via this information exchange. 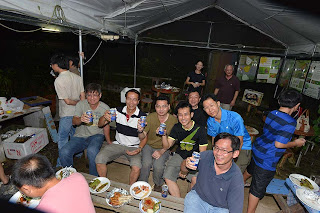 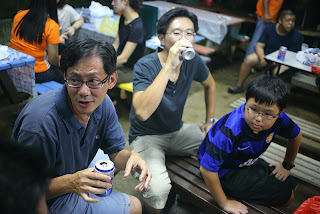 What's a BBQ without a Tiger??  CHEERS! And young Brian thinking how long he has to wait before he can drink beer legally


In terms of butterfly photography, there are very few groups or individuals who can match the excellent photographic achievements of the members of ButterflyCircle. The work of ButterflyCircle members never ceases to amaze laymen enthusiasts and experts alike - from discoveries to early stages to butterfly photography. Many of the results of the hard work and efforts have been captured in this blog since its maiden post in August 2007. The sustainability of this blog over the past five years has been through the efforts of Horace Tan (with his amazing work on early stages of butterflies) and the generous contributions of photographs from ButterflyCircle members. 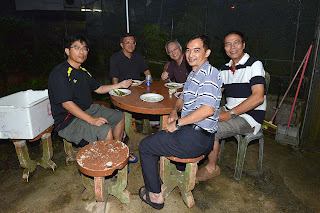 The Old Boys' Club.  Those born later than 1960 need not apply


Coming back to the barbecue, it was excellent food (thanks, Yeok Keong, Ai Ling, Nancy and the rest of the Oh clan), great company and a most enjoyable evening for everyone. I believe most of us had more than our typical dinner as Ai Ling played a fantastic host and fed us continuously with her gastronimic delights. Thanks also go to Eng Chuan, Chng and others who brought the beer and drinks, Steven Neo for the wine, and CJ who brought some nice satay all the way from a famous stall in Clementi! 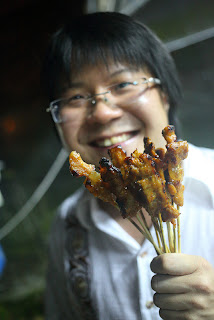 The Hungry One, looking forward to the next ButterflyCircle BBQ party!


As for the rest of us, we probably ate enough to burn off the calories of the next two days' outings over the long Easter weekend!  It was a great evening of warm camaraderie, catching up with old friends, making new ones and all with the common interest of butterflies! Thanks to everyone who turned up to make the occasion a success, and we look forward to the next ButterflyCircle social gathering, and we hope that it will be soon!
Text by Khew SK : Photos by Khew SK & Tan KY

Posted by Commander at 9:58 PM 0 comments