Butterfly of the Month - July 2022
The Julia Heliconian (Dryas iulia)

A male Julia Heliconian sunbathes with open wings on a leaf
We are well into the 2nd half of 2022 with a greater optimism towards the rest of the year. As with anything in life, there are always challenges and risks in our way, as the world continues to evolve in ways that would not have been imagined a decade ago. For example, in the workplace, one would not have anticipated a situation where employees can work from home and not be branded a "skiver"!

A female Julia Heliconian feeding on the flowers of Lantana camara at Tampines Eco Green
Indeed, the "Great Resignation" appears to be a disruption that has affected nearly every industry as staff leave for greener pastures - even in unfamiliar or unrelated industries. Did the pandemic disruption give employees the time and space to re-evaluate their lives and choose paths less trodden? Or was it a simple case of economics that rising costs and inflation caused the working person to take a more practical approach to better manage their daily expenses?

Underside of the Julia Heliconian : Top : Female Bottom : Male
The answer may be "all of the above" as everyone would have heard of examples where staff made the  decision to exit their companies for various reasons ranging from salary, work-life balance, upward mobility, meaningful work, family issues, change of environment and a whole host of other requirements. For companies, particularly in Singapore, the sudden increase in manpower costs have cut bottom lines and profits as each organisation struggles with the prospects of a global talent competition that has not been experienced for many years. 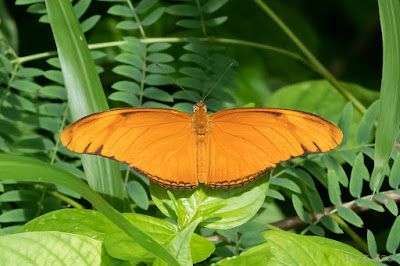 The opening up of the global workforce economy has yet to reach a level comparable to pre-covid times, as potential employees are still reticent to move out of their homelands and comfort zone. Whilst this should normalise in the months to come, the numbers of foreign employees available appear to be still relatively low. This may have added to the woes of companies looking to recruit foreign talent to replace existing employees who are part of the resignation exodus.

Speaking of foreign talents and immigrants, we turn to our Butterfly of the Month for July 2022, the Julia Heliconian (Dryas iulia). A native of the tropical and sub-tropical areas of South America, particularly in Brazil, Peru, Ecuador and other countries in that region, it can also be found in the southern states of the US. The species was unknown to this part of tropical Asia until the late 90's when a butterfly farm in Phuket, Thailand imported the species as part of its exhibits for its butterfly aviary.

It was also later discovered that the Julia Heliconian was bred and released during religious ceremonies and weddings. For a species that breeds easily and where large clutches of eggs are laid by the females, the Julia Heliconian began to spread widely in Southern Thailand. That its caterpillar host plants are considered "weeds" - Passiflora suberosa and less often, Passiflora foetida, the species began colonising southwards into Malaysia where it was first spotted on Pulau Langkawi in Sep 2009. Its spread southwards is probably also helped by the fact that it displays aposematic colouration as it is distasteful to predators.

There were no further observations of this species in Malaysia, until some time six years later when it was spotted breeding at an urban garden in the state of Selangor in May 2015. Whilst it may have already been present in several of the northern states of West Malaysia, there were no reliable sighting reports until 2015. Both adult and early stages of the species were observed. A mating pair of Julia Heliconian. Left : Male, Right : Female
It was a matter of time before the southward invasion of the Julia Heliconian would end in Singapore. And the theory was proven to be correct when an individual was spotted at Hort Park in the southern part of Singapore in June 2021. A colony emerged at St John's Island thereafter, and more individuals were observed all over Singapore island in 2021 and this year. It became more common and very often several individuals were spotted together, usually flying rapidly around, or feeding on flowers.

A male Julia Heliconian feeding on Lantana camara flowers at St John's Island
The Julia Heliconian is a narrow-winged butterfly with elongated forewings, usually with a wingspan of 82-92 mm. On the upperside, the wings are bright orange in the male and duller orange in the female. There are black borders along the wing margin, with those in the female broader and more extensive. The eyes are translucent and the compound eye details can be seen.

On the underside, the wings for both sexes are paler compared to the upperside, and are adorned with brown markings in the cell, in post-discal area as well as along the wing margins. A small pink red patch occurs in the basal area of both wings.

The butterfly is active and a relatively strong flyer. Even when it is feeding, it tends to move a lot and is not easy to photograph. The caterpillars appear spiky, and are somewhat similar to some of the species in the Nymphalidae family. The life history has been successfully documented on the invasive weed, Passiflora suberosa in Singapore.
Text by Khew SK : Photos by Gavin Chan, Khew SK, Loh MY and Horace Tan.
References and Additional Reading :
Posted by Commander at 8:39 PM 1 comments