Life History of the Leopard 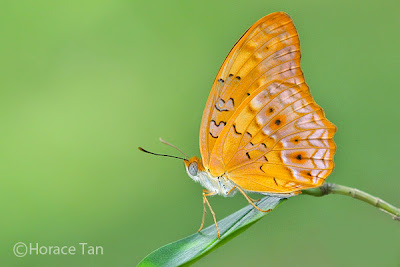 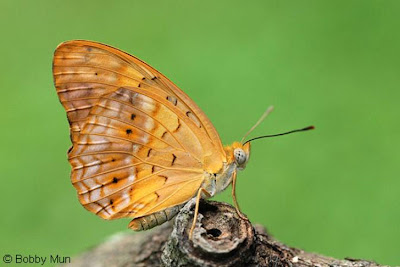 A Leopard perching on a branch. 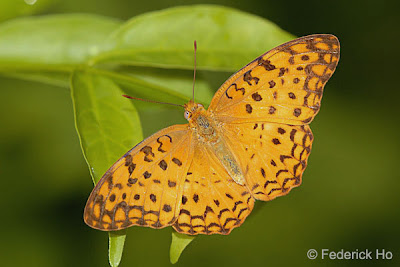 A Leopard displaying its upperside.

Physical Description of Adult Butterfly:
Above, the wings are rick orange brown and feature a fair number of black spots and streaks. Each forewing has two dark lines in the cell forming an irregular cell spot. Underneath, the wings are in paler orange with only a handful of black spots and streaks, the submarginal and postdiscal regions of both wings carry a purple sheen when seen in a side light. 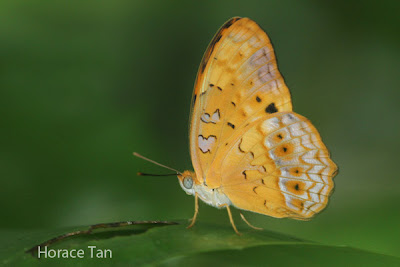 The pristine condition of the wings and the angle of incident light allow the sheen on the wings to be clearly seen on this Leopard. 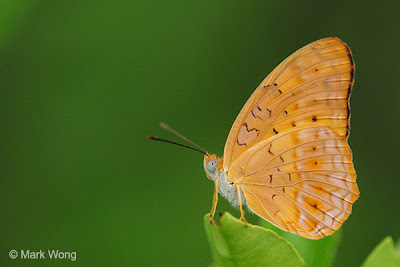 An adult Leopard taking up its position on a leaf.

Field Observations of Butterfly Behaviour:
This sun-loving species is not uncommon in Singapore. The fast flying adults are usually found in secondary growth, urban areas, sidewalks, parks and gardens. This is likely due to the fact the two known local host plants are planted in these places. The fast flying adults can be seen flying around flowering shrubs taking nectar, and at times several of them can be seen puddling together on damp ground. The restless adults make it rather difficult for photographers to capture them on film or CCD. 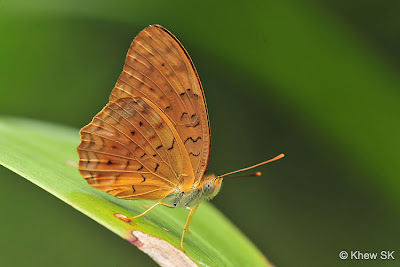 Another Leopard on a leaf-perch.

Early Stages:
The caterpillars of the Leopard feed mainly on young to middle-aged leaves of the two local host plants, Rukam Asam and Weeping Willow. 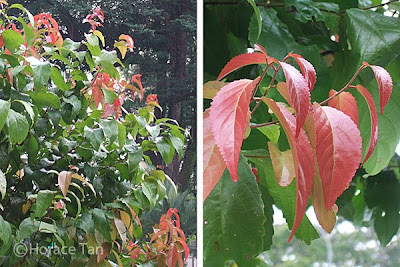 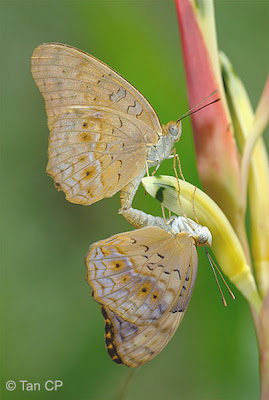 A mating pair of the Leopard.
The eggs of the Leopard are laid singly on the young shoots of the host plants. Sometimes a few eggs are found to be laid on the same leaf or the same young shoot. The pale yellow egg is somewhat globular in shape but with a blunt top. The surface is marked with small pits which are roughly hexagonal higher up and rectangular lower down. Each egg has a diameter of about 0.6-0.7mm, and a height of about 0.7-0.8mm. 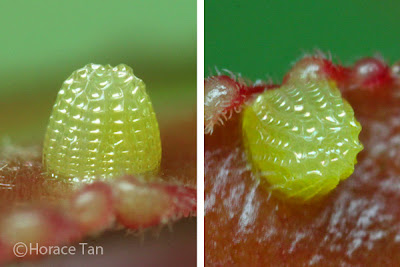 Two views of an egg of the Leopard. Diameter: 0.6mm

The egg takes about 2 days to hatch. The young caterpillar emerges by eating away part of the egg shell. The rest of the egg shell becomes the first meal for the newly hatched which is 1.2mm in length. It has a cylindrical and pale yellowish body covered with many small tubercles and moderately long setae. The head capsule is dark brown to black. 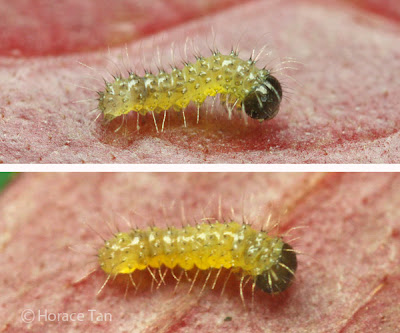 Two views of a newly hatched caterpillar of the Leopard, length: 1.2mm.

The 1st instar caterpillar feeds on the lamina of young leaves and between feeds, it typically rests on leaf underside against the midrib. After reaching about 3mm in 1.5-2 days, the caterpillar moults to the 2nd instar. 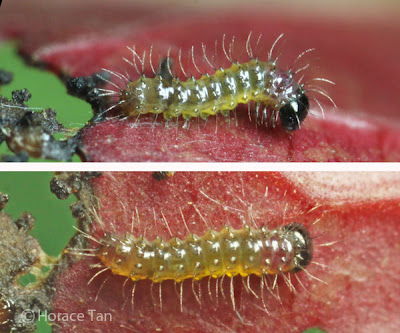 The body of the 2nd instar caterpillar is yellowish brown in base color with a green undertone. Long and branched pale-yellowish-brown processes run along the length of the body. On each side of the body, there are three series of such processes: One series occurs dorso-laterally, another lateraly and the last sub-spiracularly. The head capsule is dark brown with a white spot in the center above the labrum. This instar lasts about 1 day with the body length reaching about 6mm. 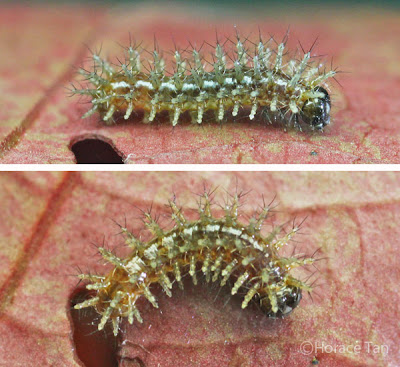 Two views of a 2nd instar caterpillar, early in this stage, length: 3.6mm

The 3rd instar caterpillar has the dorso-lateral and lateral processes dark in color. A white band links up the base of the sub-spiracular processes which are also whitish in color. A narrow dark band runs dorsally on the body segments. The head capsule is pale brown to orangy brown in base colour. This instar takes about 1.5 days to complete with body length reaching about 11mm. 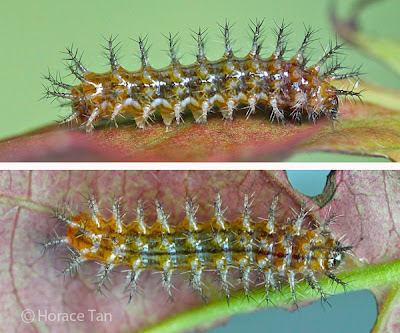 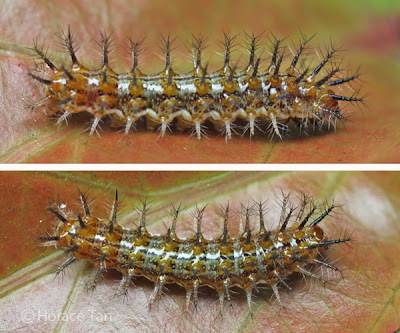 The 5th (and final) instar caterpillar is similar to the 4th instar caterpillar except for the appearance of a black circular base for all dorso-lateral and lateral processes, and darker shade of orangy brown for the body base colour. 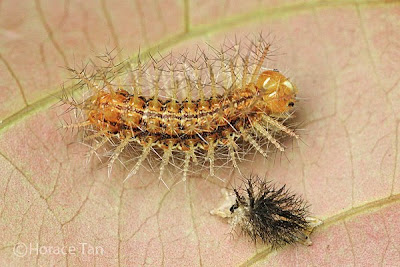 Moulting to the 5th instar and the inflation of the new processes at 10x, 6x and 3x speed settings. 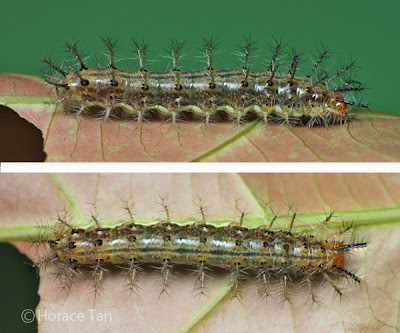 The 5th instar lasts for 2-3 days, and the body length reaches up to 26mm. On the last 0.5 day, the color of the entire body changes to yellowish green. The caterpillar ceases feeding and wanders around. Eventually it stops at a spot on the underside of a leaf, and spins a silk pad from which it hangs vertically to take on the pre-pupatory pose. 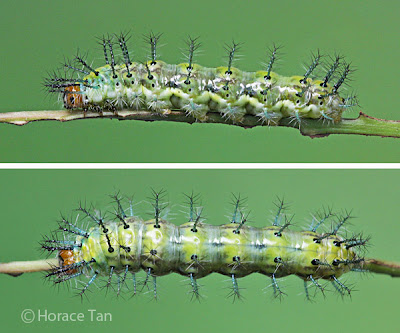 Two views of a 5th instar caterpillar, late in this stage, length: 25mm. 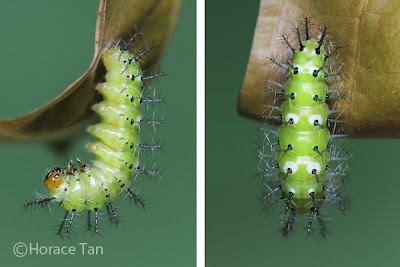 Two views of a pre-pupa of the Leopard.

Pupation takes place about 0.5 days later. The pupa suspends itself from the silk pad with no supporting silk girdle. It is entirely green to yellowish green. Dorso-laterally there are five long pairs of red and red-tipped processes, and five pairs of small red-tipped tubercles. Each of these processes has a broad silver-colored base. There are also two slender silver patches along the edge of the wing pad. Length of pupae: 15-16mm. 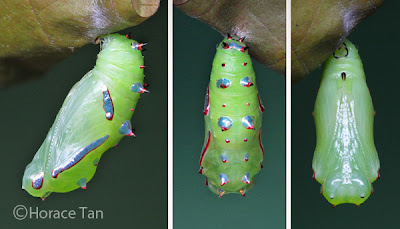 Three views of a pupa of the Leopard. 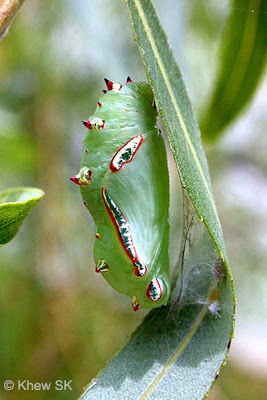 A pupa found in the field on the Weeping Willow. 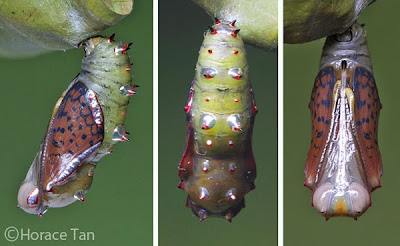 Three views of a mature pupa of the Leopard.

After about 4 days of development, the pupal skin of the mature pupa turns translucent and the "leopard"-like markings on the forewing upperside become discernible as a result. The eclosion event takes place the next day.

The Eclosion event of a Leopard butterfly 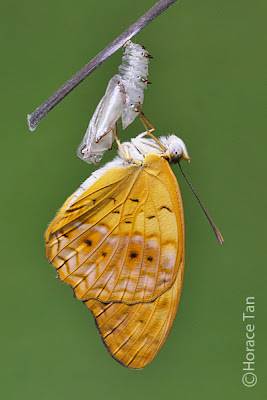 A newly eclosed Leopard resting on its pupal case.