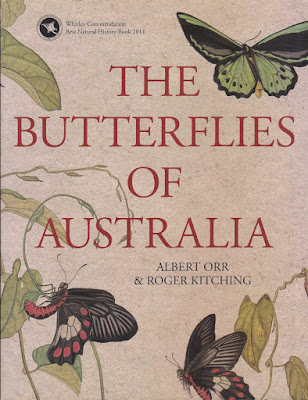 Recently, a friend who visited Australia sent me some butterfly photos that he took on his trip, for identification. Most were relatively common urban butterflies and were easy to identify. One of the books that I turned to was my favourite personal reference, Butterflies of Australia by Dr Albert Orr and Professor Roger Kitching. Both accomplished and renown biologists and entomologists, the authors intended for the book to be a field guide "for a general readership, and not a scientific monograph". 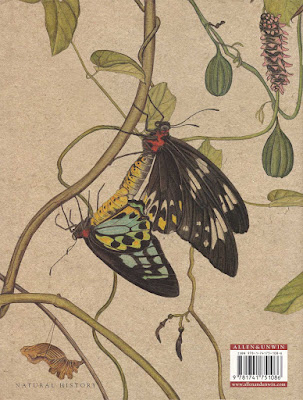 What is additionally unique about this book, is that all the illustrations of the butterflies, their environment, host plants, caterpillars and so on, are hand-drawn pictures! The amazing pictures in the book itself was illustrated by Dr Orr, an excellent artist in his own right. 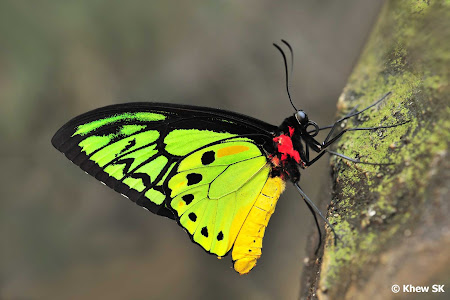 
This blogpost introduces this excellent book which is great for beginners and the more sophisticated enthusiast alike. Only sample photos of the book are shown here, and for readers who are interested in getting this large 335-page book, you are strongly encouraged to purchase your own copy from reputable bookshops or online. 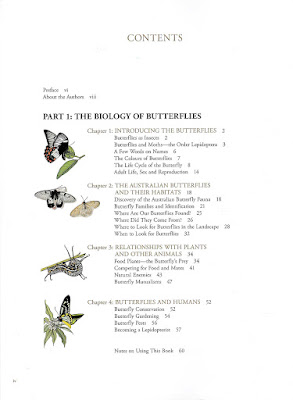 
Part 1 of the book covers the mandatory subjects like introduction to Lepidoptera, classification, life cycle, colours and reproduction in Chapter 1. Chapter 2 features the Australian biogeography in relation to butterfly distribution, and where observers can find the various species. Chapter 3 deals with butterflies' relationships with plants and other animals, competition for food and mates and predators. Chapter 4 discusses conservation, gardening and how one can become an avid student of butterflies. For beginners, these first 60 pages of the book would be good to read in greater detail. 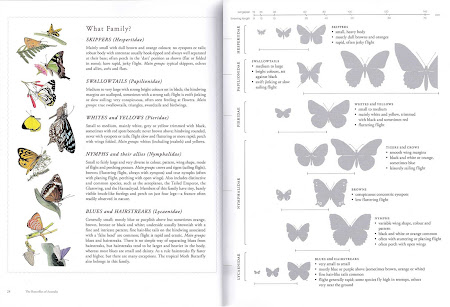 Various chapters featuring Australian species from the 5 families of butterflies 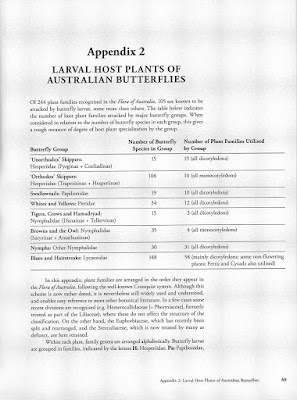 
Part 2 starts with the Hesperiidae, with plates covering the Australian skippers. In keeping with their intent to make this book a readable field guide, the authors grouped the species by their collective English common names, rather than sort them by taxonomic names. This makes the book an easy reference for the Australian (and other) butterfly enthusiasts to search for the various species by their local vernacular names, instead of look for genera and species names. 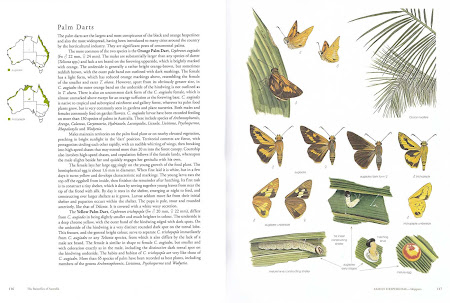 Typical pages in the book which organises the species by their collective common names, and illustrations of the butterflies, host plants, life histories and distribution in Australia 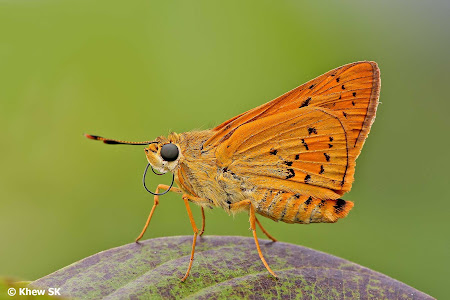 In these sample pages, the Yellow Palm Dart (Cephrenes trichopepla) is featured. This is the same species that was discovered in Singapore back in 1999 by Kelvyn Dunn. The blogpost of that discovery that was documented here on this blog can be found here. This species, a new discovery to Singapore at that time, is now a common species and has even moved up north to Malaysia where it has been spotted regularly. 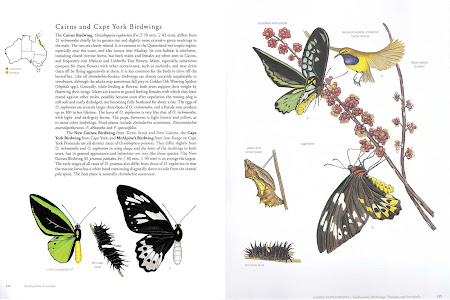 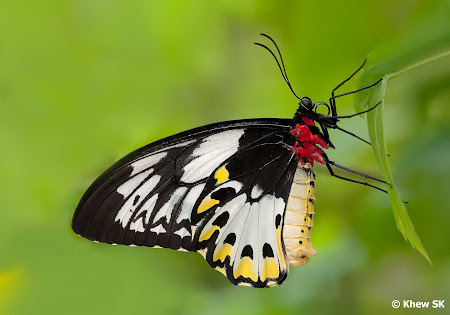 The next chapter features the spectacular Papilionidae and the mouth-watering Ornithoptera birdwings found in Australia. Although the Papilionidae is represented by only 19 species in Australia, these are some of the most spectacular butterflies to be found in the continent. Large and showy, some of the species are amongst the world's largest butterflies. It is also interesting to note that many of the species that can also be found in Singapore, bear different common names in Australia. 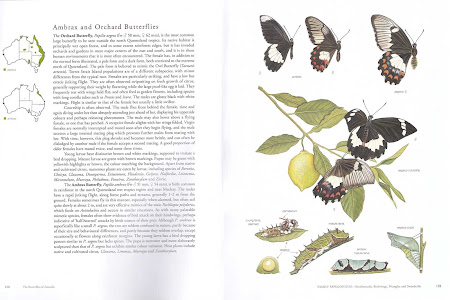 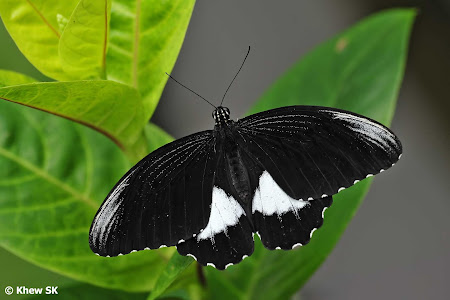 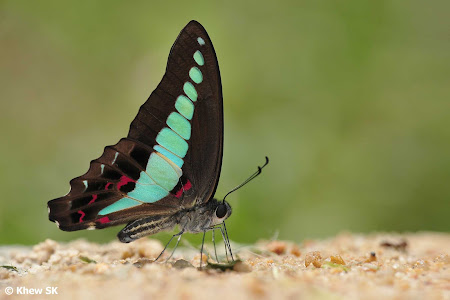 For example, the Common Bluebottle (Graphium sarpedon) is called the Blue Triangle in Australia, whilst the Tailed Jay (Graphium agamemnon) is known as the Green-spotted Triangle. Our common urban Lime Butterfly (Papilio demoleus) goes by the name Chequered Swallowtail in Australia, whilst the Five Bar Swordtail refers to the species Graphium aristeus instead of Graphium antiphates. 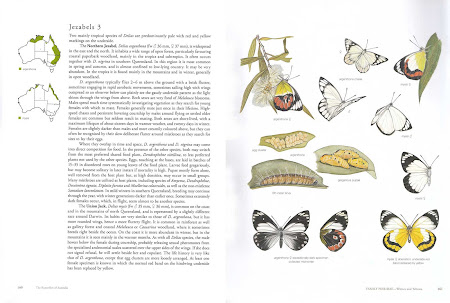 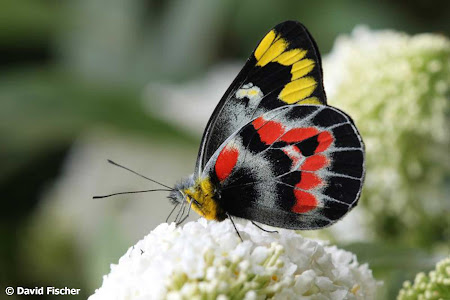 The Pieridae family follows in the next chapter. Australia has amongst the most beautiful and exotic-looking Delias (or commonly known as Jezebels) in the world. In the book, they are called Jezabels. Amongst the Whites and Sulphurs that are usually associated with the family Pieridae, the Australian Jezabels feature prominently with 8 species extant. 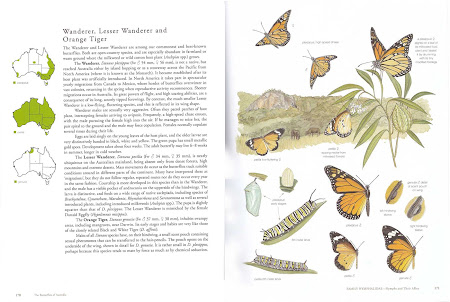 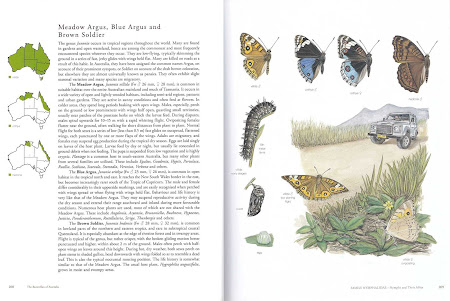 In Chapter 8 of the book, most of Australia's 81 species of Nymphalids are featured, with twelve sub-families occuring in Australia. There are some species that are also found in Singapore, with the Common Tiger (Danaus genutia) called the Orange Tiger as its local common name. The Blue Pansy (Junonia orithya) and the Chocolate Pansy (Junonia hedonia) are known as the Blue Argus and Brown Soldier respectively in Australia. 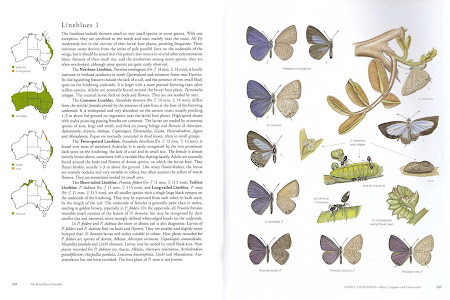 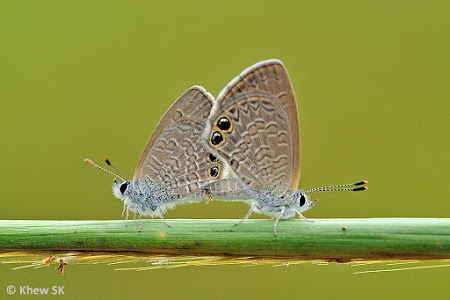 The butterfly families in the book ends with the Lycaenidae, of which more than 140 species are recorded from Australia, and counting! Amongst the many spectacular blues, coppers and hairstreaks, one species was recently recorded as a new species to Singapore - the Two-Spotted Line Blue (Nacaduba biocellata). An Australian species, it has somehow found its way to Singapore, and is now a permanent resident. 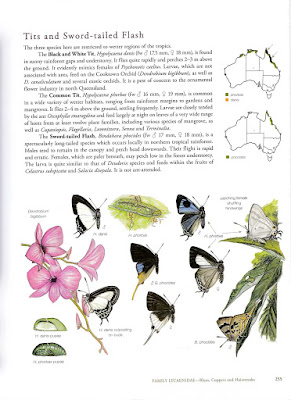 For a butterfly primer and an introduction to Australian butterflies, this book by Dr Orr and Prof Kitching can be considered one of the best and easy-to-read references available. Enthusiasts who have their own library of butterfly books from all over the world should not miss having this book in their collection.

I have also had the privilege of having Dr Albert Orr review my book, A Field Guide to the Butterflies of Singapore 2010, and the review published in the Australian Entomologist  - Volume 38 Issue 4 (Nov 2011)