A Tale of Two Kings

A Tale of Two Kings
Featuring : The King Crow and Palm King 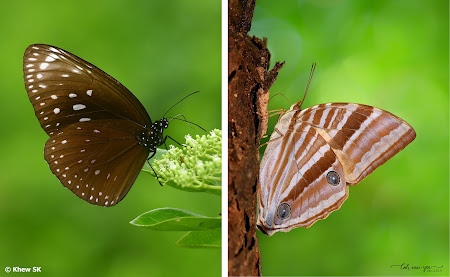 
Whenever the title of "King" is conferred to a person, a thing or an animal, it bestows on the holder a large measure of high regard or an expectation of being preeminent in its class. A King in the human world describes a ruler of people and territory - a leader, a sovereign or a monarch, inherited by birthright or by conquest. Used as an adjective, it suggests superiority over the normal, due to sheer size, influence or magnificence. 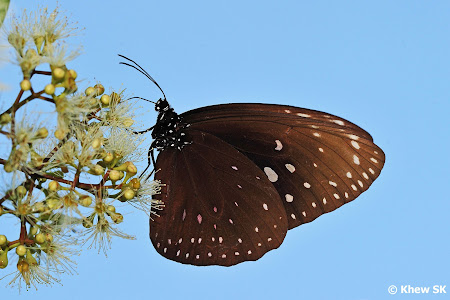 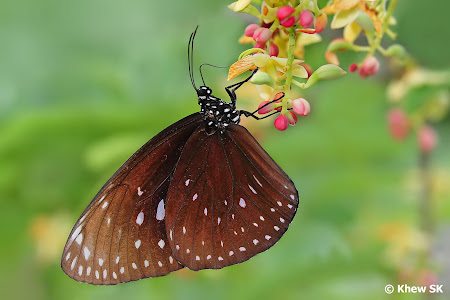 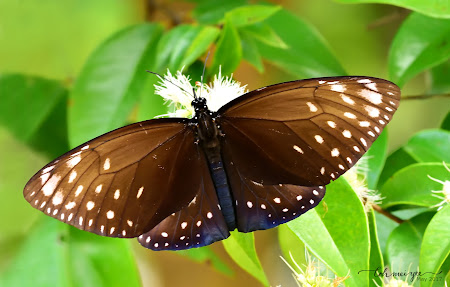 Various poses of the King Crow

In the butterfly world, there are a number of species that have been given the common name of "King" by the early collectors and authors. Of these, two can be found amongst the butterfly fauna in Singapore. Whether these species deserve this majestic name or not, is subject to debate, but over the years, they have been regularly called by their respective names that have remained in common use by butterfly enthusiasts. 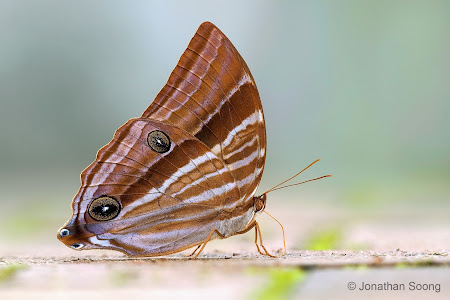 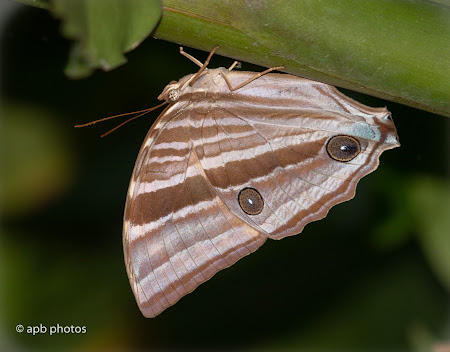 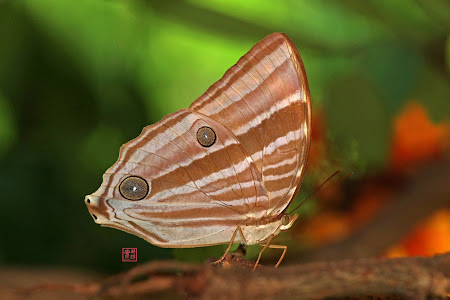 Both these species are notable for their larger size in relation to other related species in their sub-families. Although they are rather drab butterflies, their presence in the environment is very obvious as they fly around in their respective habitats. Both these species are not uncommon, and generally observed in localised areas where they frequent - usually in the vicinity of their caterpillar host plants and preferred habitats. 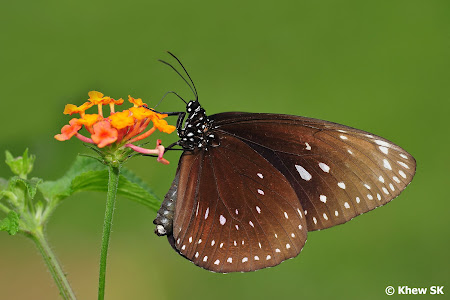 A King Crow feeding on the flower of Lantana camara

The first of our "Kings" is the King Crow (Euploea phaenareta castelnaui). Also called the Great Crow in certain regions, this species is the largest in its genus Euploea, of which 8 species have been recorded in Singapore. The King Crow frequents mainly mangrove and back-mangrove environments where its caterpillar host plant, the Pong-Pong Tree (Cerbera odollam) can usually be found. It is a resilient butterfly and has a large mobility index where it can fly long distances to other habitats in search of food. 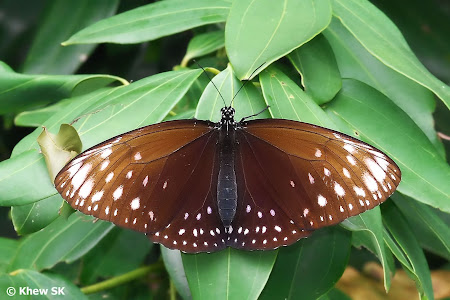 There was a time when the Pong-Pong Tree was cultivated along roadsides and in urban parks and gardens as a shade tree. However, the damage caused by its large round fruits dropping onto parked cars and also the fact that this lactiferous tree has a poisonous sap that may be harmful to humans and pets has made it less desirable as a roadside tree in recent years. However, it still grows commonly in mangrove areas like Pasir Ris Park mangroves and Pulau Ubin. 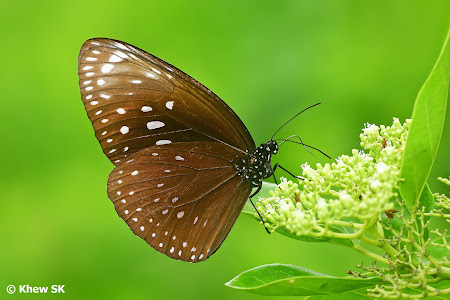 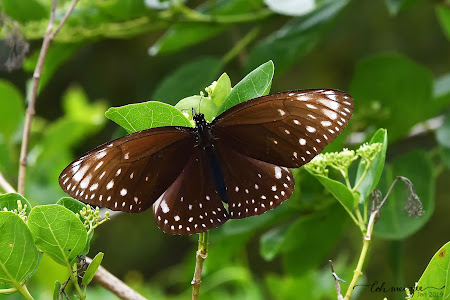 The King Crow is a slow flyer, making its presence felt by its sheer size as it glides by unhurriedly at treetop level. It is one of the distasteful Crow species that predators, like birds and reptiles, usually avoid. Its typical colour combination of black wings with white spots of the Danainae is a form of aposematic colouration that predators recognise. 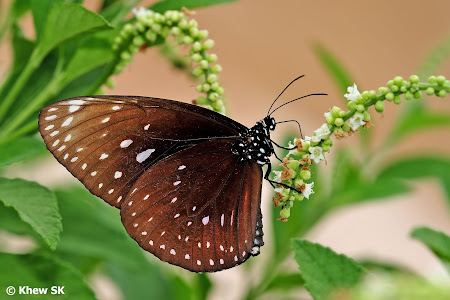 A King Crow feeding on the flowers of a String Bush

The King Crow has large violet-tinged forewing apical spots sets it apart from the lookalike Malayan Crow. On the male, there is a raised scent patch on the hindwing cell and tornal area. The tornal area has a purplish sheen when viewed in a sidelight. The dorsum of the forewing of males are bowed, whilst it is straight in the females.

The 2nd "King" that lords over Singapore's butterfly scene is the Palm King (Amathusia phidippus phidippus). The genus comprises a number of similar-looking species that are not easy to identify. All the species are large, usually shy and most are rare. The only common species that is most likely to be encountered by the butterfly enthusiast is the Palm King. 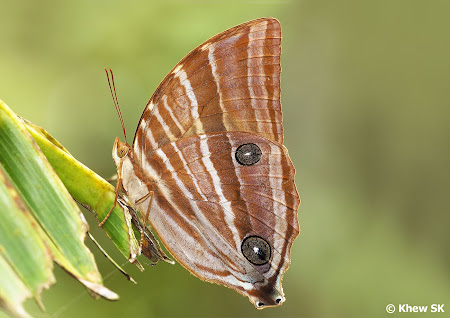 A Palm King perched on the leaves of a Coconut Palm, its caterpillar host plant

The Palm King is usually found in heavily shaded areas in the vicinity of its caterpillar host plant, the Coconut Palm (Cocos nucifera). It is attracted by overripe fruits and is sometimes encountered puddling on decomposing matter on the forest floor. It is a large butterfly, and is very conspicuous when it takes off in the habitats where it can be found. 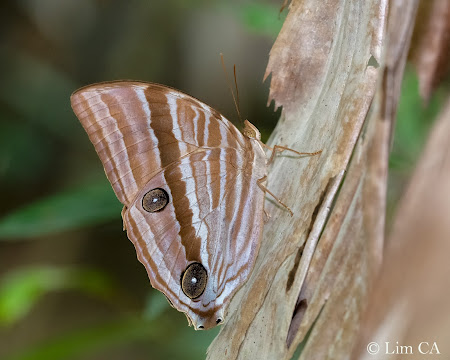 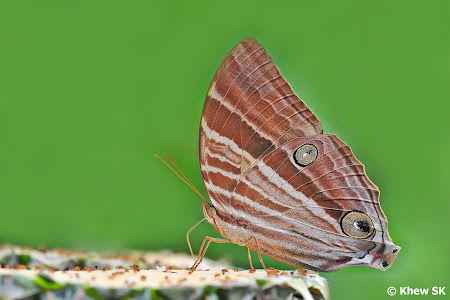 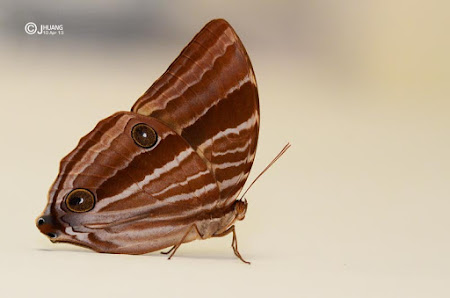 The species is crepuscular in habit, and is attracted to lights of houses, and sometimes in urban Singapore, to the well-lit corridors of our HDB high rise apartments. There have been observations of pristine individuals perched on the walls of high rise residential areas, especially in the late evening hours of the day. 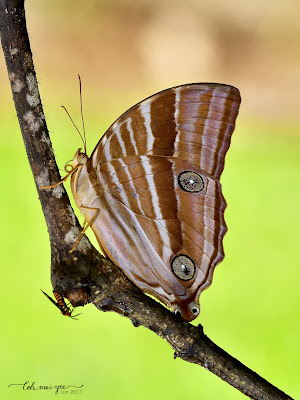 A Palm King perched on a twig

The Palm King is a medium brown on the upperside and usually unmarked. The underside is patterned with broad reddish-brown bands and narrower whitish bands across both wings. The hindwing features two large white-centred ocelli. The tornal area is blunt and has a pair of false "eyes". 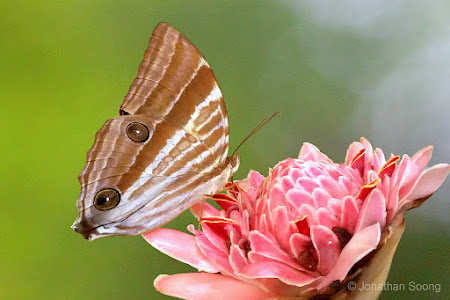 A potential 3rd King in Singapore?

Recently, a possible 3rd "King" appeared in the form of a related species, the Bicolor-Haired Palm King (Amathusia friedrici holmanhunti). The key identifying attribute of this species are the abdominal hair tufts which are bicoloured, as compared to the Palm King's unicolourous hair tufts. It is hoped that a voucher specimen that will settle the doubt can be acquired soon. Until then, we have, for certain, two "Kings" in the butterfly world in Singapore.

Posted by Commander at 9:26 PM 0 comments