Life History of the Dark Caerulean 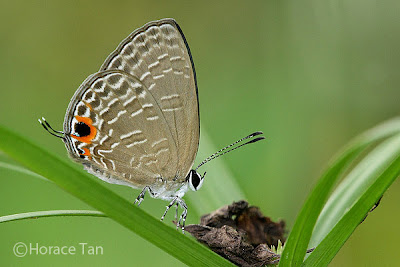 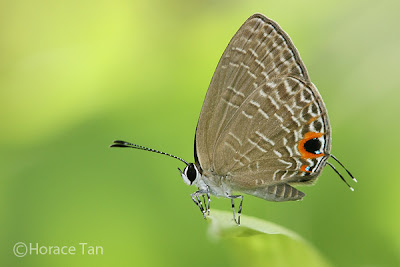 A female Dark Caerulean "tip-toeing" on a leaf tip in a wasteland.

A male Dark Caerulean perching on a leaf.

Physical Description of Adult Butterfly:
Above, the male is dark metallic blue above on both wings, and the female is paler blue with prominent marginal spots on the hindwings. Both sexes have broad black borders on both wings (narrower in the hindwings) reaching into the upper portion of the cell. Underneath, the wings are ochreous-brown and marked with buff striae. The comma-like marking in space 1b on the hindwing is narrow and rather indistinct (marked with a flashing red circle in the picture above this section). Each hindwing features a black-centred orange-crowned tornal spot and a white-tipped filamentous tail at the end of vein 2. 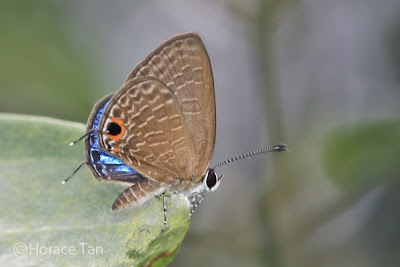 A male Dark Caerulean giving us a partial view of its metallic blue patch on the upperside. 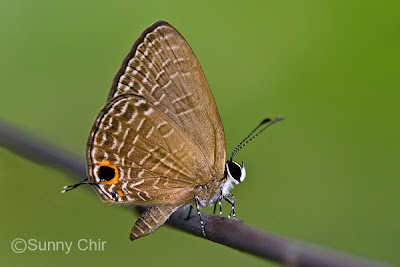 A male Dark Caerulean caught perching on a twig.

Field Observations of Butterfly Behaviour:
This species is not uncommon in Singapore but its distribution is rather localized and restricted to places where its host plants are growing. At times, a fair number of the adults can occur together at certain locations. They are relatively small for a Jamides species, and have a rapid and active flight, unlike most of the other species of the genus. The males give an attention-grabbing metallic blue flash when fly past an observer. The adults can be found in open wastelands, mangrove areas and the fringes of various nature reserves. 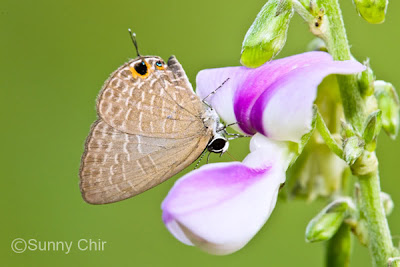 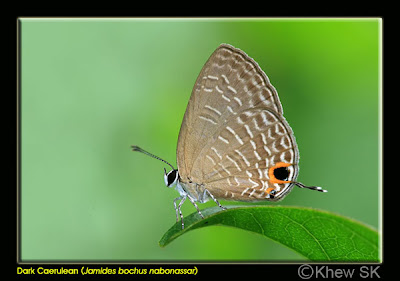 Another Dark Caerulean on a leaf perch.

Early Stages:
All four recorded local host plants are from the Leguminosae family and feature relating large inflorescences which serve as food sources for the early stages of the Dark Caerulean. A newly hatched caterpillar will bore into a flower bud and proceed to eat the flower parts lying within. Subsequent instars continue to do so until they are too large to feed within the bud. Moulting also takes place within the confine of the flower buds/flowers. For this reason, only the larger final instar caterpillars are readily observed on inflorescences of the host plants. 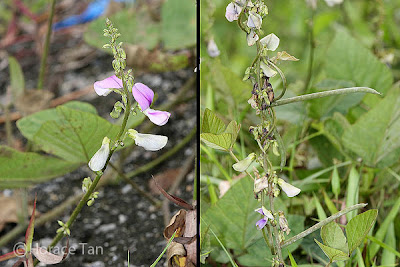 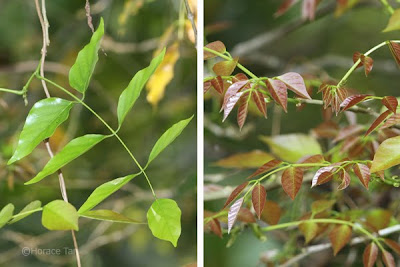 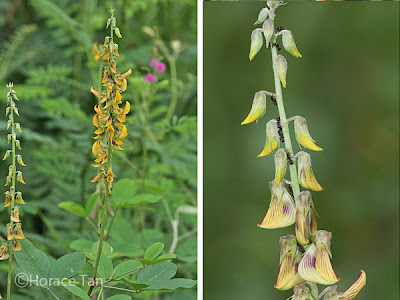 Host plant : Crotalaria mucronata. A close-up view of the flowers is given in the right panel. 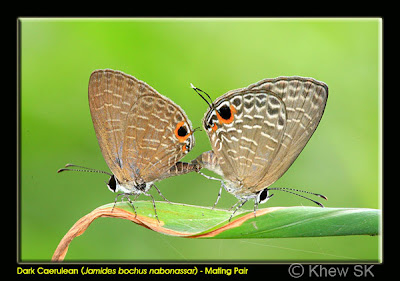 A mating pair of the Dark Caerulean. 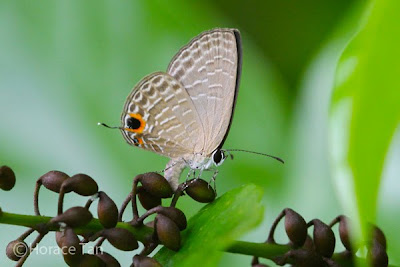 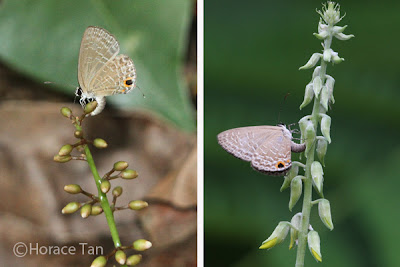 The small pale green egg is discoid in shape and about 0.4-0.5mm in diameter. The surface is covered with a reticulated pattern of intersecting ridges. 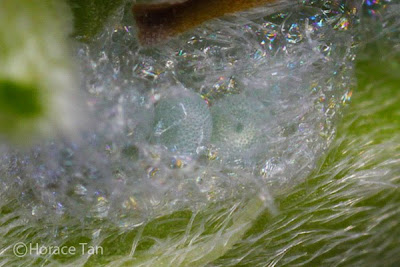 Eggs of the Dark laid between buds on an inflorescence of Pueraria phaseoloides. 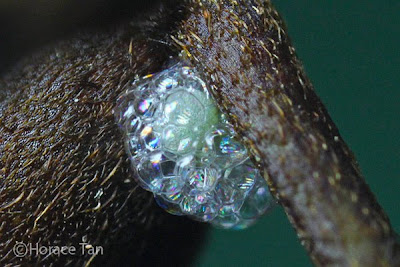 An egg of the Dark Caerulean laid between a pedicel and the peduncle of an inflorescence of Pongamia pinnata. 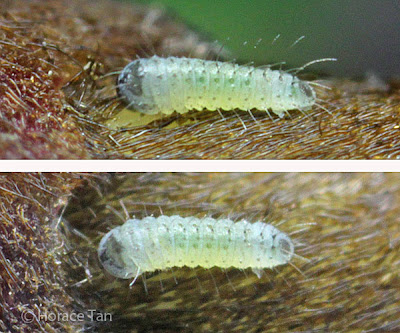 The newly hatched moves to a nearby flower bud and begins the laborious task of boring into it. It then stays within the flower bud for the goodies within. After about 1.5 days of growth and reaching a length of about 1.8-2mm, the caterpillar moults to the next instar, typically within the same first flower bud it bored into earlier. 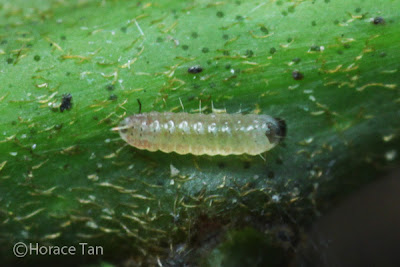 A 1st instar caterpillar, later in this stage, length: 1.5mm.

The 2nd instar caterpillar has numerous short setae, each with a black base. The body ground color is yellow, but the body surface is predominantly red on the lateral fringe, and to a lesser extent on the dorsum. The diamond-shaped prothoracic shield has become pitch-black in color and the head capsule yellowish brown. This instar lasts about 2 days with the body length reaches up to 3.5mm. 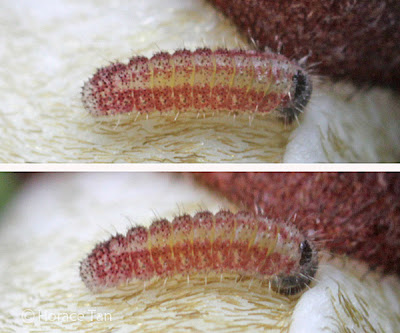 Two views of a 2nd instar caterpillar, early in this stage, length: 1.7mm. 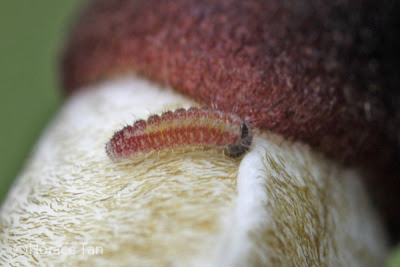 A far view of the previous picture showing the 2nd instar caterpillar boring into a flower bud of Pongamia pinnata. 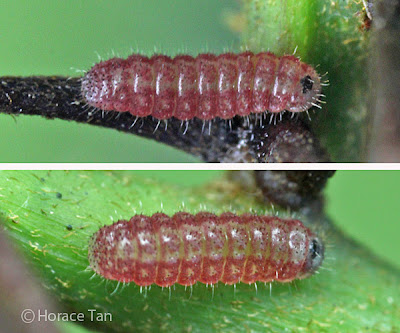 The 3rd instar caterpillar resembles the 2nd instar caterpillar closely in having numerous short and fine setae all over the body, and the same reddish brown body coloration. Both the dorsal nectary organ (on the 7th abdominal segment) and tentacular organs (on the 8th abdominal segment) are barely discernible. The 3rd instar takes 2-3 days to complete with the body length reaching about 6.5mm. 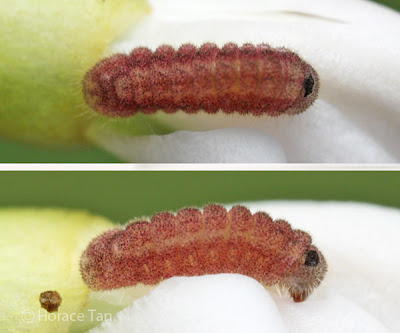 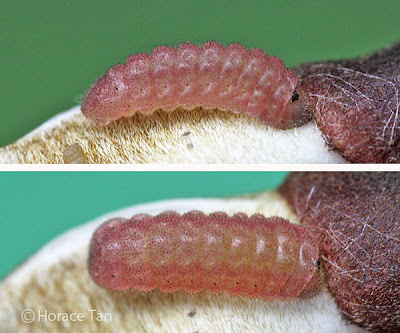 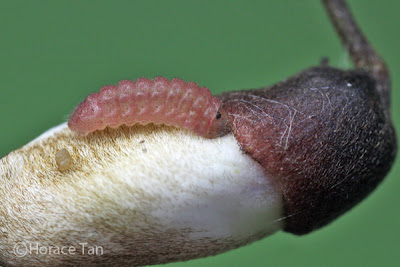 A 3rd instar caterpillar boring into a flower bud of Pongamia pinnata.

Still covered with numerous fine setae on the body surface, the 4th (and final) instar caterpillar has taken on a darker shade of yellowish to reddish brown. The dorsal nectary organ is now more easily observed as a paler elliptical patch on the 7th abdominal segment. The whitish tentacular organs are short but everted rather frequently . Another noticeable change is in the diamond shaped prothoracic shield becoming less prominent with its color changed to yellowish brown. 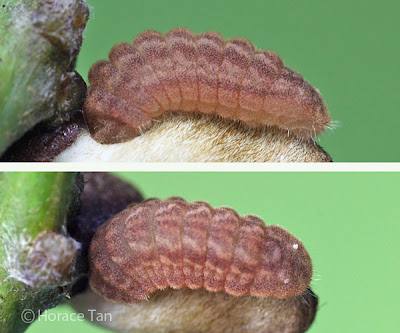 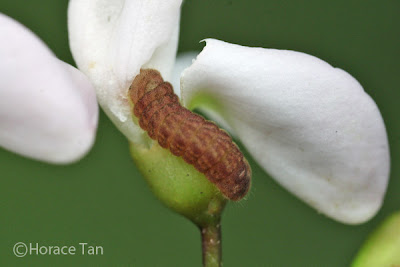 A 4th instar caterpillar feeding on a flower bud of Derris trifoliata. 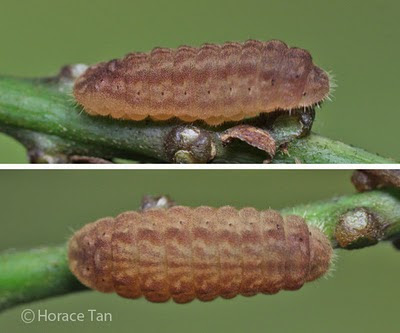 After about 4 days of growth and reaching a maximum length of around 11mm in the final instar, the body of the caterpillar gradually shrinks, and finally takes on a dark pinkish to reddish brown coloration. Most bred specimens chose to enter their pre-pupatory phase in tight pockets of space within leaf litter, sometimes in groups of 2 to 3. A handful chose to do so within flower buds which are sufficiently large to house the matuer caterpillar. At the chosen spot, the caterpillar readies itself for pupation by spinning a silk girdle and a silk pad. The caterpillar secures itself to the silk pad via claspers on its posterior end. 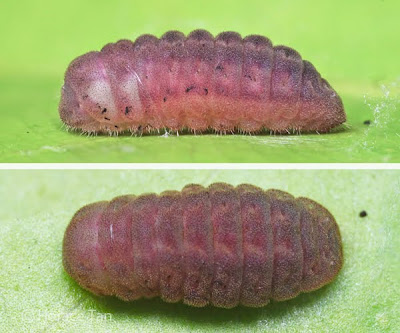 Two views of a pre-pupa of the Dark Caerulean.

Pupation takes place after one day of the pre-pupal stage. The pupa has the typical lycaenid shape. It is pale pinkish to beige in base color with a number brown and black specks. of various sizes. The pupa has a length of about 8.5-9.5mm. 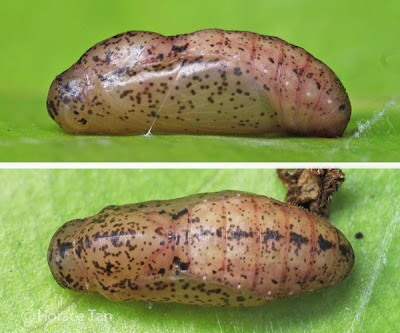 Two views of a pupa of the Dark Caerulean, length: 9mm

Eclosion takes place after 6 days in the pupal stage. The mature pupa gradually darkens in colour the day before. Bluish patches on forewing uppersides become clearly visible in the wing pads of the mature pupa. 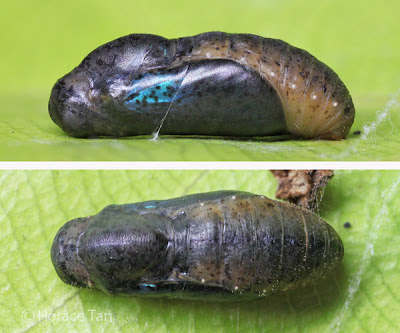 Two views of a mature pupa of a male Dark Caerulean. 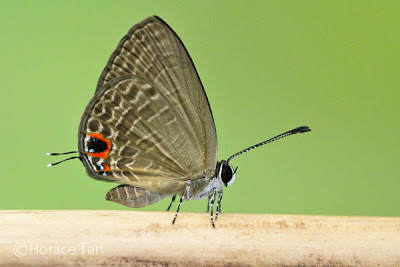