Life History of the Psyche 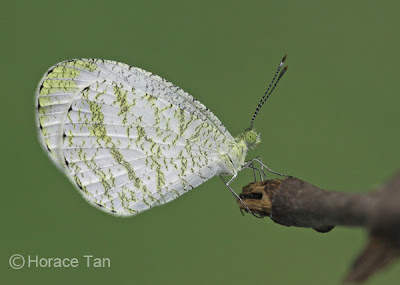 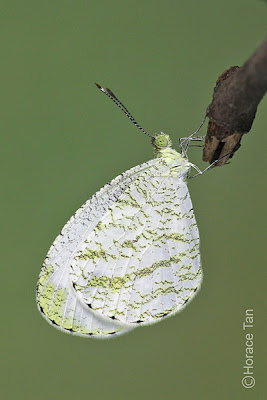 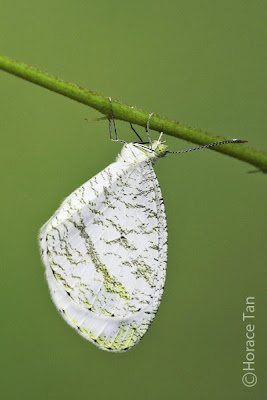 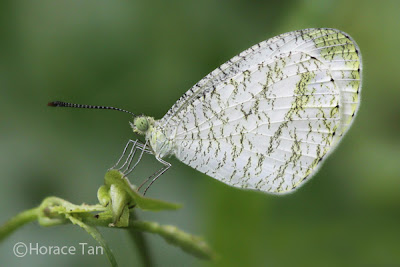 Physical Description of Adult Butterfly:
The adults are small and have rounded white wings. Above, the wings are entirely white except for a black apical border and a black subapical spot on the forewing. Beneath, the wings are white in ground color, and there is a black subapical spot on the forewing as per the upperside. The entire hindwing as well as the costal border and apex of the forewing are marked with several dark striations which are highlighted in pale green shading. These green patches are usually lost in aged or weathered specimens. 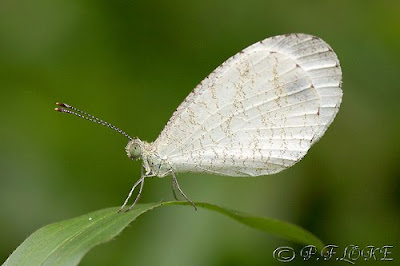 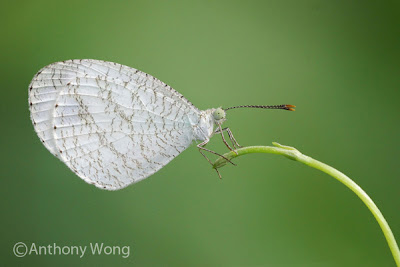 Field Observations of Butterfly Behaviour:
As is the case for the entire oriental region, Psyche is relatively common and widespread in Singapore. The small and delicate adults are often seen flying incessantly in wastelands, at the fringe of nature reserves, grassy patches and even in urban and residential areas. Typically they are found in areas where its host plant, the Purplse a common weed, is growing in relative abundance. The slow and gentle flying adults are most active in sunny weather and frequently visit flowers for nectar. 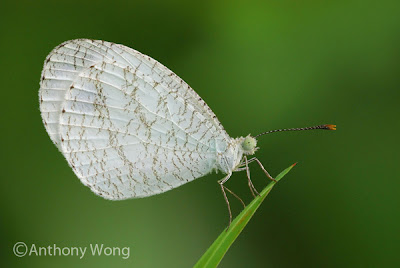 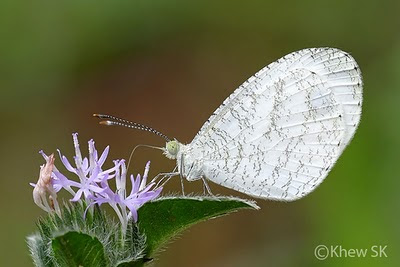 Early Stages:
The only recorded local host plant, Cleome rutidosperma, is a common herbaceous weed with violet-blue to pink flowers. The caterpillars of the Psyche feed on the relatively young to middle-aged leaves and young/ tender stems. Locally, Psyche shares the same host plant with Striped Albatross and Cabbage White. 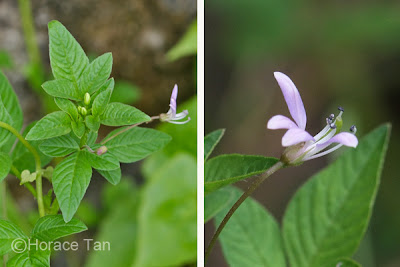 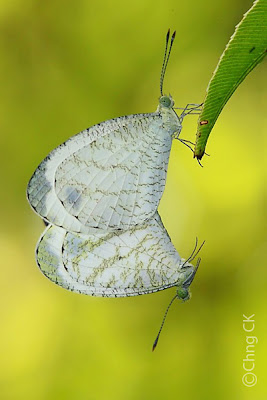 A mating pair of the Psyche.
The eggs of the Psyche are laid singly on the host plant, typically on the underside of a leaf. The egg is spindle-shaped and standing on one end with a height of about 1.2-1.3mm, and 0.3mm in diameter. It has vertical ridges and numerous transverse striations. The vertical ridges end in low projections encircling the micropylar. The color of the egg is initially bluish green but gradually decolorises to pale yellowish green as the egg matures. 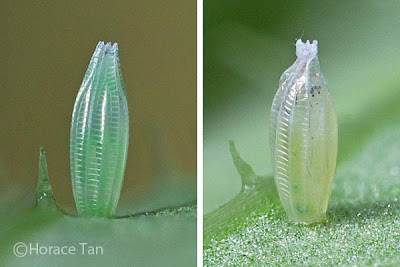 The egg takes about 2.5-3 days to hatch. The newly hatched has a length of about 1.8mm and has a whitish translucent head capsule. Its cylindrically-shaped body is whitish with yellowish green undertone. and featuring dorsal, dorso-lateral and lateral rows of small tubercles running lengthwise. Each tubercle has a long setae emerging from the middle of it. The end of each setae bears a tiny droplet. 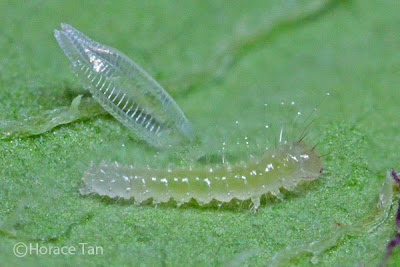 A newly hatched caterpillar resting near its egg shell. 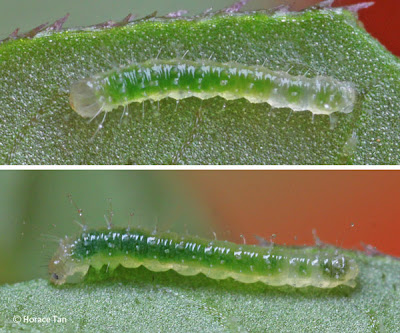 The newly hatched eats the empty egg shell for its first meal, and then moves on to eat the leaf lamina. With the intake of the leafy diet, the body takes on a green undertone, and the head capsule turns pale yellowish. The 1st instar growth is fast paced and the body length reaches about 3mm. After about 2 days in the 1st instar, the caterpillar moults to the next instar. 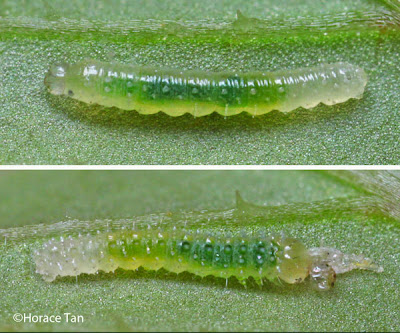 The 2nd instar caterpillar is yellowish green with similar setae-bearing tubercles as in the 1st instar. Besides these prominent tubercles, there are numerous tiny tubercles doting the body surface giving the cat a freckled appearance. This instar lasts about 1.5-2 days with the body length reaching up to 4.5mm. 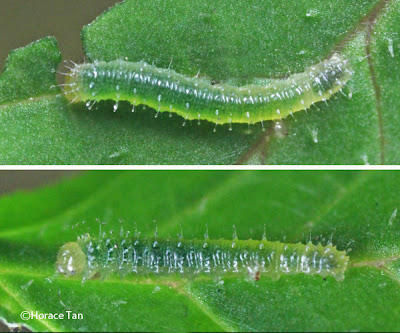 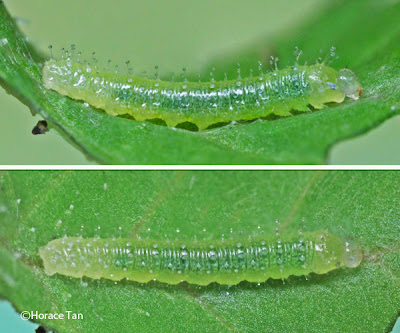 Two view of a late 2nd instar caterpillar, dormant prior to the moult. 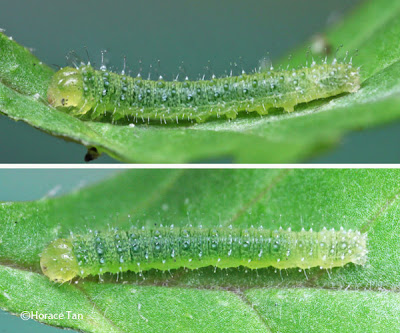 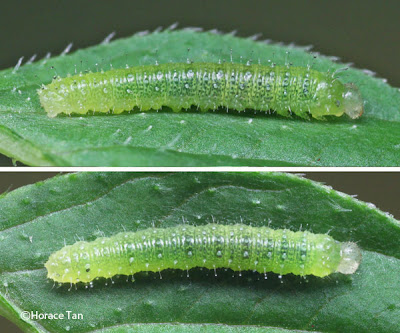 Two view of a late 3rd instar caterpillar, dormant prior to the moult.

The 4th instar retains all the features found in the 3rd instar but with a stronger green undertone in the body segments and the head capsule. Numerous moderately long and fine setae are also featured laterally. This penultimate instar lasts 1.5-2 days with body length reaching about 10mm. 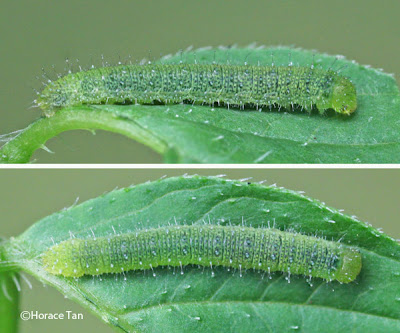 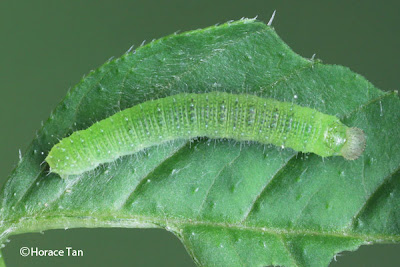 The 5th and final instar caterpillar resembles the 4th instar caterpillar initially. The many shallow tubercles dotting the body surface are now darker in contrast to the ground color, giving the body a speckled appearance. The green head capsule also carries a fair number of conical tubercles with short setae emerging from most of them. As the growth progresses, the body takes on a white dusted appearance, particularly so spiracularly. The 5th instar lasts for 2.5-3.0 days, and the body length reaches up to 20-21mm. 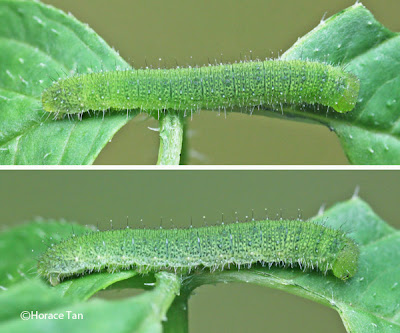 Two views of a 5th instar caterpillar, early in this stage, length: 11mm. 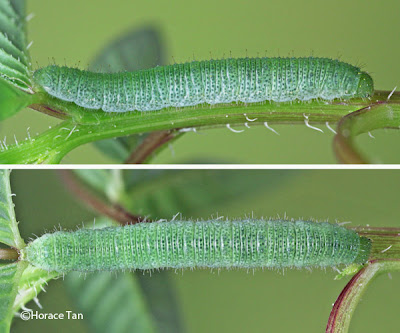 Two views of a 5th instar caterpillar, late in this stage, length: 19mm. 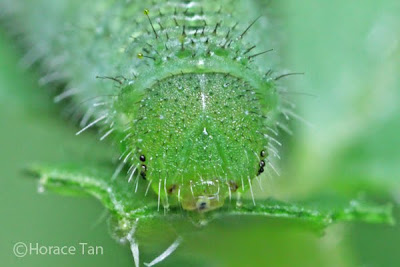 A frontal view of a 5th instar caterpillar.

On the last day of the 5th instar, the body of the caterpillar shortens and changes to a bright green shade. It ceases feeding and comes to rest on the underside of the stem/stalk of the host plant . Here the caterpillar spins a silk pad and a silk girdle to secure itself and then becomes immobile in a cradled pre-pupatory pose. 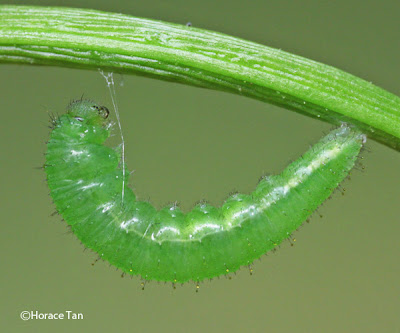 A pre-pupatory larva of the Psyche.

Pupation takes place about 0.5 day later. The green pupa secures itself with the same silk girdle as in the pre-pupal stage. It has a very short but pointed cephalic horn, a slight dorsal protrusion, and a large wing case tapering into a keel. There are yellowish streaks occurring in the wing case and laterally. Length of pupae: 13.5-14.5mm. 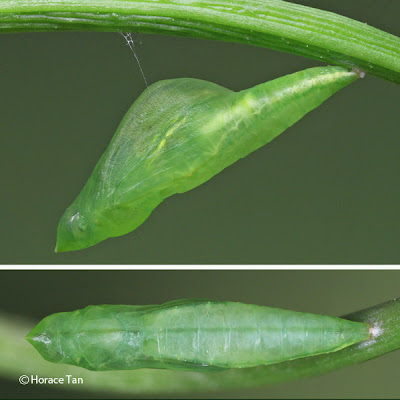 Two views of a pupa of tje Psyche. 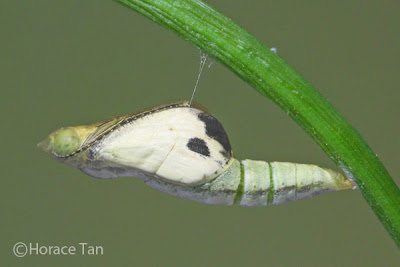 A mature pupa of the Psyche showing the prominent sub-apical spot and dark apical border on the forewing.
After about 4.5-5 days of development, the pupal skin turns translucent as the development within the pupal case comes to an end. The white forewing upperside and its dark markings become discernible as a result. The following day, the adult butterfly emerges from the pupal case. 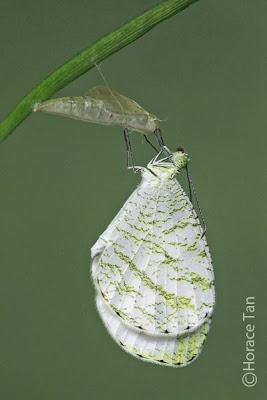 A newly eclosed Psyche drying its wings on its pupal case.