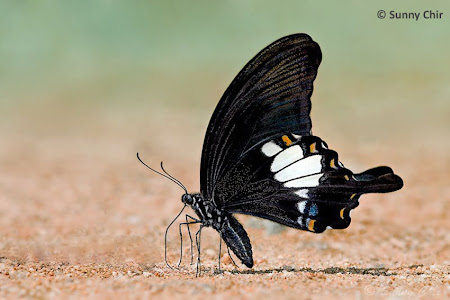 Last month's haze is but a memory now, blown away as quickly as the prevailing winds changed. Our northern neighbour, Malaysia received a good dose of the polluted air before the rains came and it was over as suddenly as it started, despite reaching hazardous levels in terms of air quality. The forest fires in Sumatra were blamed on the slash-and-burn method that was used to clear large tracts of land - mainly for the cultivation of oil palm. As we picked up our lives and continued with our daily routines again, after the record-breaking PSI of 401, one wonders when the next wave of the polluted smog will return again. 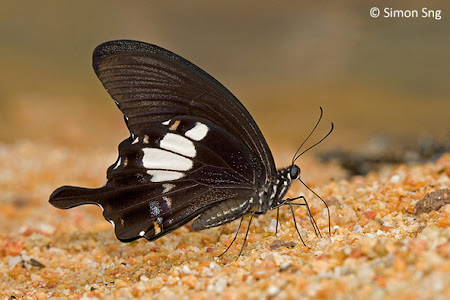 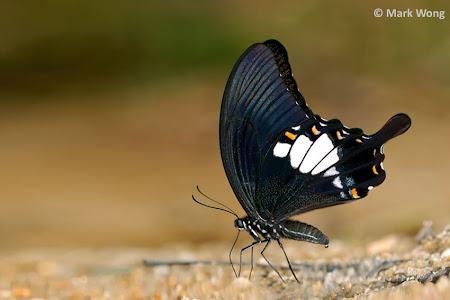 Whilst regulations are in place to prohibit the open burning of forests and plantations, enforcement and other punitive measures to ensure that such burning does not recur is another matter altogether. It is interesting to see how the Indonesian government gets its act together to prevent such irresponsible burning in future. Fortunately, political pressures at the diplomatic level, together with the favourable change in weather ended the July 2013 haze quickly. 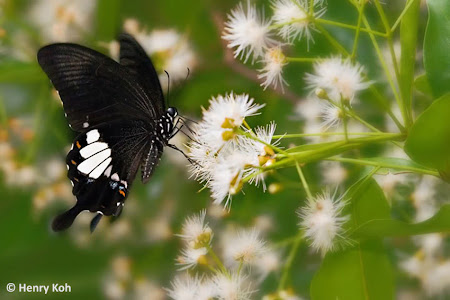 Over in Singapore, after the disruptive conditions caused by the haze, Singapore experienced another abnormal weather phenomenon in the form of a hail storm in the afternoon of 25 June. Hail is a form of solid precipitation and consists of irregular lumps of ice dropping with the rain. Hail is supposedly caused by supercooled water droplets freezing on contact with particles in the air, such as dust, during a thunderstorm. Whilst the authorities declined to conclude that the hailstorm was caused by the haze, we are left to form our own opinions, considering that haze is certainly contributing to "particles in the air" as the rains fell. 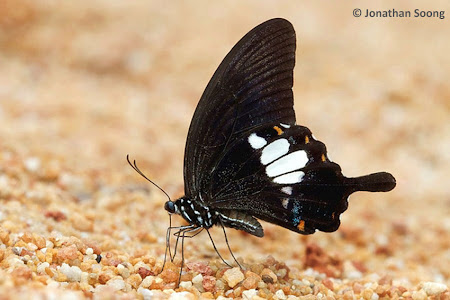 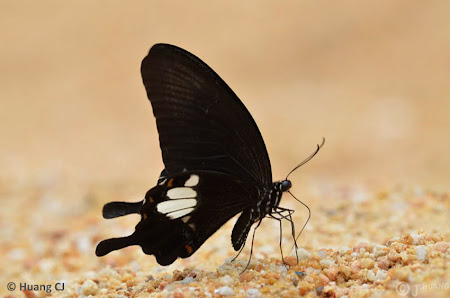 July was of course an exciting month for biodiversity in Singapore, with the 2nd Festival of Biodiversity held at VivoCity. ButterflyCircle contributed a video, which basically summarises the group's work in butterfly conservation and research, as well as featured the members' high quality photographs. NParks mentioned that the visitorship over the weekend when the Festival was held was estimated at about 13,000 visitors to the exhibition area, a far higher number than the first festival held at the Singapore Botanic Gardens. 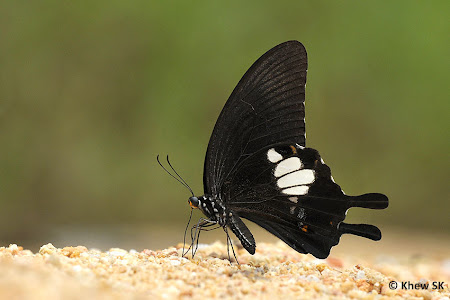 This month we feature the forest-dependent Swallowtail, the Blue Helen (Papilio prexaspes prexaspes). A rather rare species in Singapore, the Blue Helen is usually observed singly in the forest reserves. It is rarely, if ever, seen in urban parks and gardens. It was not listed in the checklists of the early authors, and was first discovered in the Chestnut Drive area some time back in late 90's. It makes an erratic appearance in various areas of the nature reserves over the years and is believed to be now a resident species in Singapore. 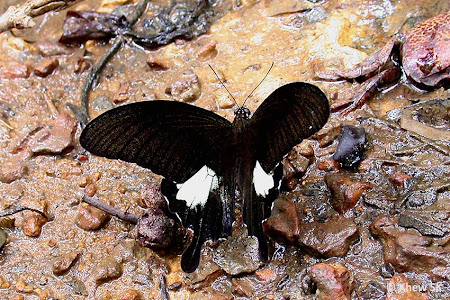 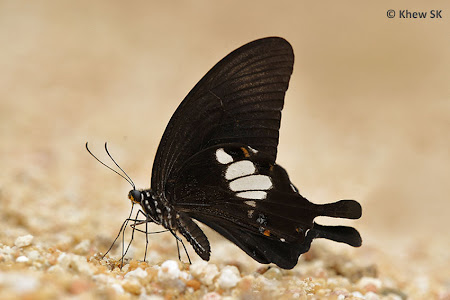 The Blue Helen is only one of two "Helen" species of the swallowtails that occur in Singapore. The other one is the Great Helen (Papilio iswara iswara) which also shares the same localities with the Blue Helen. However, the Blue Helen is the smaller of the two species, and is observed feeding on the flowers of the Common Asystasia, Lantana, Saraca and various Syzygium spp. 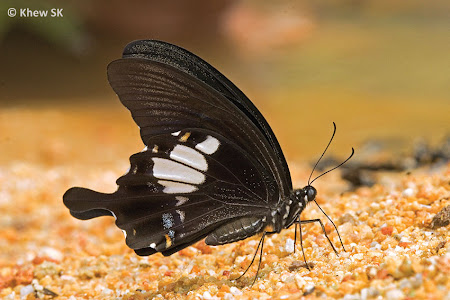 Males of the Blue Helen are often observed puddling at sandy stream banks and damp footpaths in the forests that have been tainted with decomposing organic material. Usually flying amongst the treetops restlessly, this species can be approached more easily when it is distracted whilst puddling. 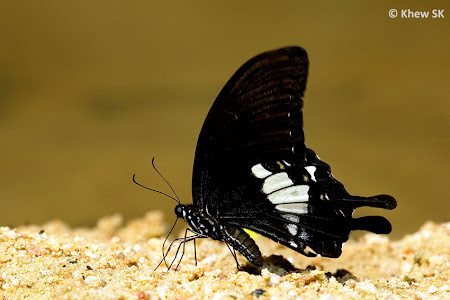 The Blue Helen is a predominantly black butterfly, with four prominent white patches on the upperside of the hindwings extending into space 4. On the underside, there are narrow pale beige submarginal spots but some may be obscure. Near the tornal area of the hindwing there are blue lunules. There is a spatulate tail at vein 4 of the hindwing. 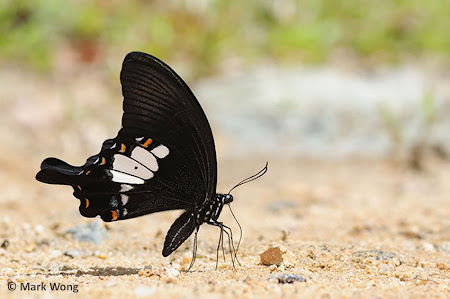 Thus far, the caterpillar host plant of the Blue Helen remains elusive. Although it is likely to share similar host plants from the Rutaceae family like the related Great Helen, the early stages of this species remain unrecorded in Singapore.