An Aussie Skipperoo Comes to Town 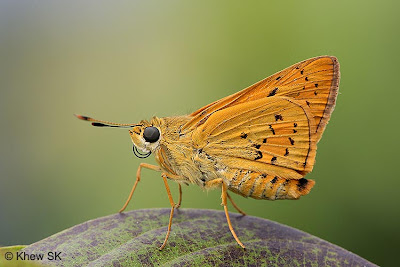 It took quite some time of careful research and breeding the entire life history of this species before ButterflyCircle members finally confirmed that this Hesperiidae, which is usually found in Northern Australia, is now a permanent resident of Singapore (and also Malaysia!) 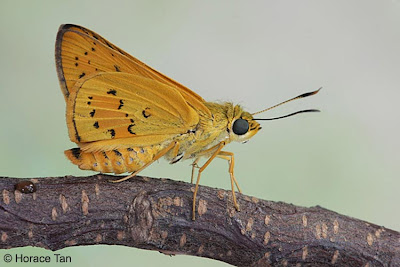 This skipper, which superficially resembles the local Telicota species, escaped notice for many years. It all started (now that I've had time to dig out my notes and emails from various people) with an email from a butterfly expert from Australia who was on holiday in Singapore. This was back in 1999! Kelvyn Dunn, who wrote me an email later in 2003, said this :
"Recently in Singapore (1999) I observed and examined in the hand (incl photographed) an example of Cephrenes trichopepla (an Australian sp.) in Fort Canning Park. I have video images.

Have you found any evidence of this skipper species as yet? I presume mine was not athe only one. (I can send pics if you want to see them to examine it for yourself).

In Australia my claim has met some scepticism because I did not preserve the adult." 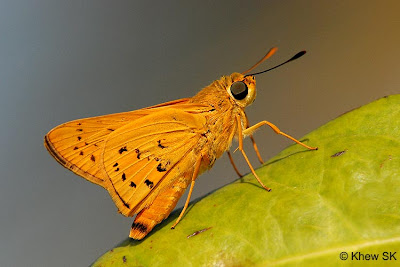 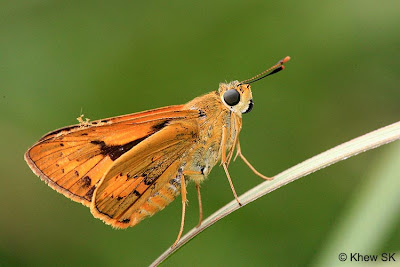 Some time later, more individuals of this rather large skipper turned out in various locations in Singapore - public parks, gardens, flower nurseries and so on. By then, we had confirmation of the existence of the Plain Palm Dart after a few shots of the more distinctive females were validated. Hence I assumed that what Kelvyn observed in 1999 was probably a male Cephrenes acalle. 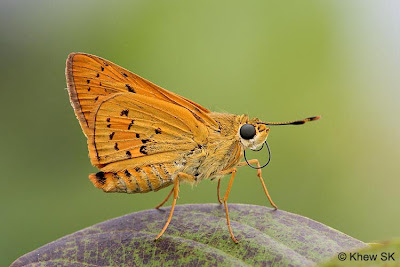 Although the males of the Plain Palm Dart had more angular apical forewing area, the markings on the undersides are less distinct than this other strange skipper that had clean orange colours and crisp markings on the undersides. The physical appearance of this butterfly didn't really match the markings of any of the Telicota spp shown in the reference books on Malaysian, Singaporean and even Thai butterflies. 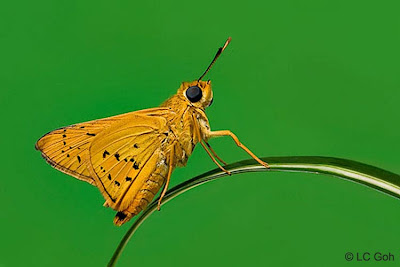 So we continued with the belief that this skipper could be just be displaying variations of the markings of the extant species of Telicota or the solitary Cephrenes sp in Singapore. 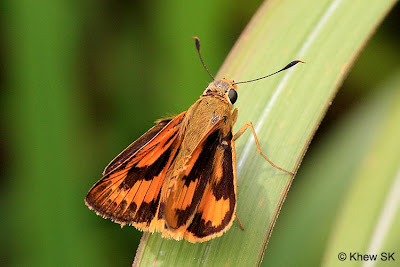 More shots turned up of this species, which we incorrectly identified as one of the Telicota spp. But the larger size of many of the individuals sighted continued to intrigue me, although I put it down to variations in the sizes of the Hesperiidae, which occurs quite often amongst some other species. Even after managing to capture a mating pair of this species, I left it that it was one of the Telicota.

By good fortune and chance, ButterflyCircle member Anthony Wong discovered a caterpillar feeding on coconut leaf (Cocos nucifera) during a survey of the offshore island of Pulau Semakau. Left in the good hands of our expert caterpillar farmer, Horace Tan, photos of the caterpillar indicated a physical difference from the Telicota caterpillars as shown in various reference books. This caterpillar had unique orange-yellow "cheeks" on both sides of its mandibles. 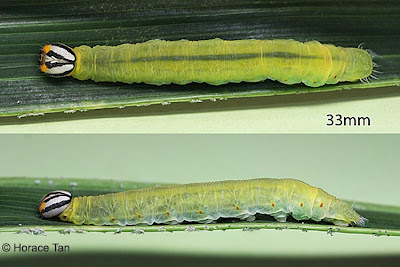 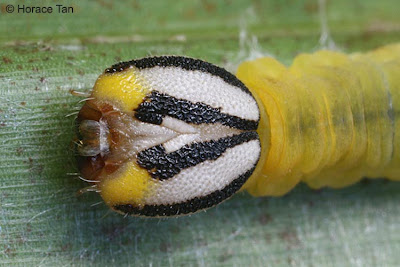 Close up of the Yellow Palm Dart's caterpillar, showing its orange-yellow "cheeks"

A quick research on Internet resources found a closely-matched early stages of the Australian skipper, Yellow Palm Dart (Cephrenes trichopepla). Shortly before this find on Pulau Semakau, our ButterflyCircle member in Kuala Lumpur, LC Goh, had also recorded complete life history of a an unidentified species of skipper in March 2009. Comparing the photos with more of the caterpillars that were eventually bred in Singapore, it was confirmed that what LC Goh bred, was also a Yellow Palm Dart! 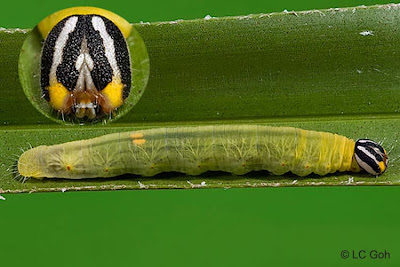 Further consultations with Kelvyn Dunn, who generously provided photos and research papers that he had written on two resident Cephrenes in Australia, and also our Malaysian expert lepidopterist, Dr Laurence Kirton, it is now established beyond doubt, that the Hesperiidae species, the Yellow Palm Dart (Cephrenes trichopepla) is now part of the butterfly fauna in Malaysia and Singapore. 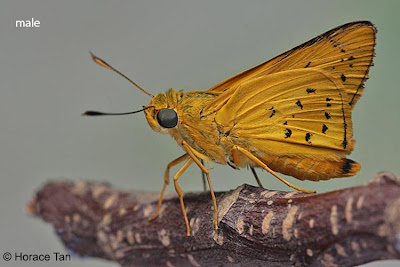 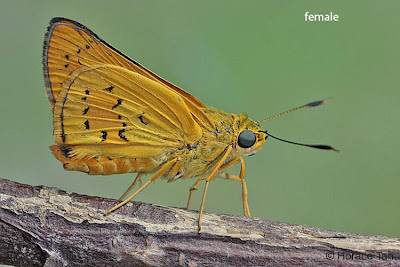 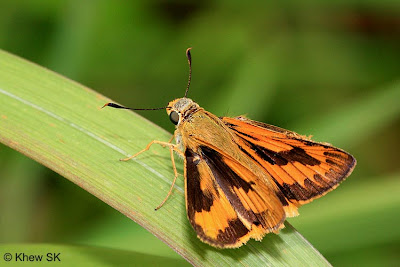 The caterpillar host plant on which the species was bred in Singapore is the Coconut Palm. However, the species is known to also feed on various other Palmae in Australia.
So, as we wish "G'day, mate" to this Australian "foreign talent" and new addition to the Singapore (and Malaysian) checklists - the Yellow Palm Dart, we also hope to one day see another similar Australian species the Orange Palm Dart (Cephrenes augiades) reaching the shores of Singapore. 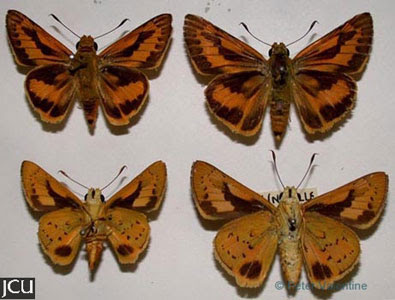 In conclusion, Kelvyn, if you are reading this article, you can now assure your skeptics that you indeed saw a Yellow Palm Dart here in Singapore in 1999. Your valued discussions over emails and articles and photos that you sent me are very much appreciated. 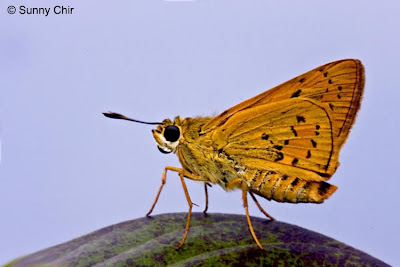 Posted by Commander at 7:25 PM 4 comments