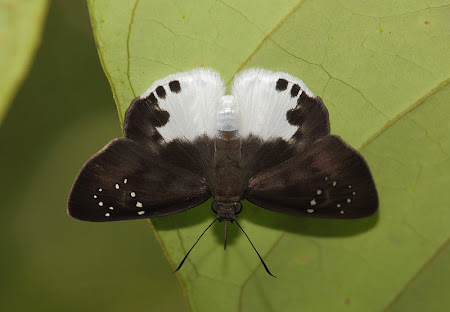 There are four species of the "Snow Flats" belonging to the genus Tagiades that can be found in Singapore. The "Flats" belong to the subfamily Pyrginae, named because of the butterflies' open-winged pose when at rest or feeding. They fly rapidly, but stop to rest frequently with their wings opened flat to sunbathe. When disturbed, they display a behaviour where they fly off and rest on the underside of a leaf, still with their wings opened flat.
The Malayan Snow Flat, shown here, shot by ButterflyCircle member Koh Cher Hern, is moderately rare, and where observed, they are usually found singly. Its appearance is typical of many of the species in the genus, with dark brown forewings with several small hyaline spots, and a white tornal area with large dark spots at the marginal area.
Posted by Commander at 8:38 AM 0 comments