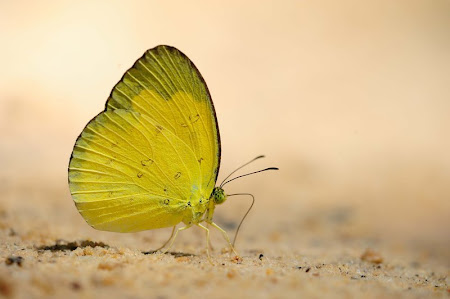 This species is another forest species that is more often encountered within the sanctuary of the forested nature reserves of Singapore. It is moderately common but usually encountered singly. It is difficult to distinguish this species with certainty from its lookalike cousins in the Eurema genus, particularly when in flight. It also displays the habit of hiding upside down under a leaf shelter when disturbed.
This abnormally small individual was encountered last weekend in the Central Catchment nature reserves. Although it features the usual single cell spot on the underside of the forewing, the prominent subapical streak that is usually associated with this species is also missing. Here, it was photographed puddling by ButterflyCircle member Anthony Wong.
Posted by Commander at 8:00 AM 0 comments