Life History of the Large Dart 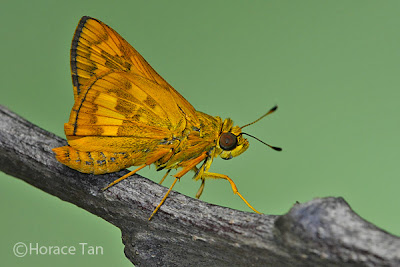 Physical Description of Adult Butterfly:
The Large Dart is the largest of all Potanthus species, approaching the size of a Telicota species. Above, markings are orange-yellow, with the spot in space 6 on the hindwing very small or absent, and the three apical spots are separate from the spots in spaces 4 and 5. Underneath, the markings carry an orange tinge, and the spot in space 5 on the forewing is not completely detached from that in space 6. 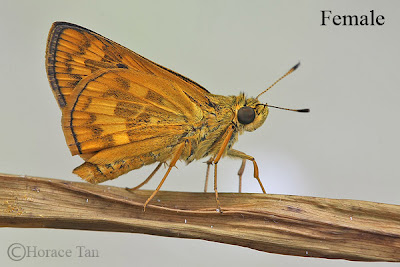 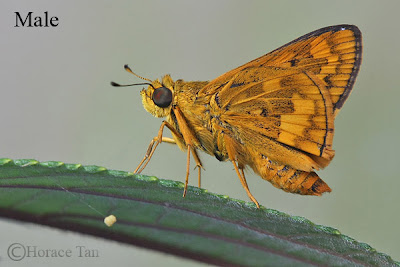 Field Observations of Butterfly Behaviour:
This species is only recently re-discovered and added to the Singapore checklist. Adult sightings have so far been made in multiple habitats such as wastelands, nature reserves and mangrove areas, where the host plant can be found growing. During these sightings, adults have been observed to carry out activities such as visiting flowers, sunbathing and puddling.
Early Stages: 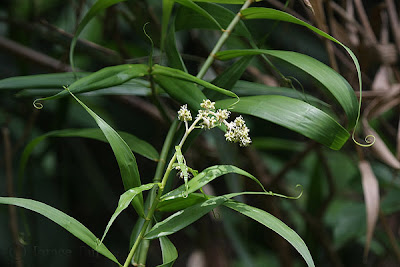 The host plant, Flagellaria indica, is a climber with strong but slender stems. The leaves are linear-oblong and 8-25cm long. Usually, the leaf tip ends in a coiled tendril. Flowers are white and occur in a branched terminal panicle. This plant is common in open thickets near the sea and in the local nature reserves. The caterpillars of the Large Dart feed on leaves of this plant, and live in shelters made by joining edges of a leaf together with silk threads.

Leaf shelter construction by caterpillars of the Large Dart (3rd and 5th instar).
The eggs are laid singly on the leaf, either on the basal part or on the coiled tendril. Each hemispherical egg is creamy white with a slight yellow tinge. The micropylar sits atop. The surface is covered with many tiny pits, almost indiscernible to the naked eyes. The base diameter is about 1mm. 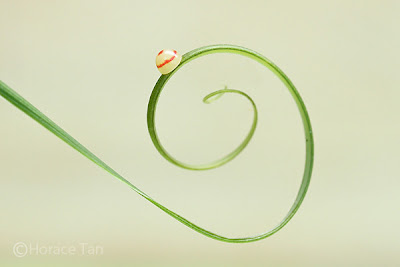 An egg of the Large Dart laid on the coiled leaf tip. 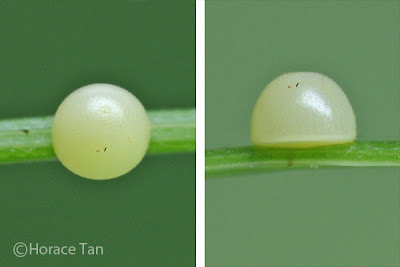 Two views of a "fresh" egg of the Large Dart. 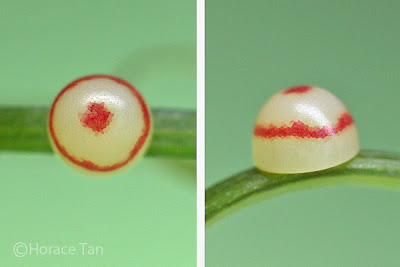 Two views of a developing egg. The red markings appear on day 2. 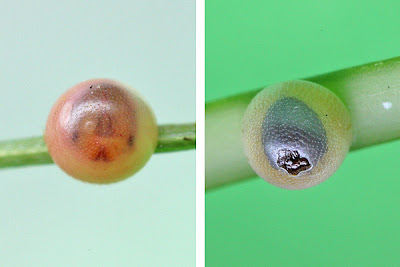 Developing eggs. Left: showing a vague outline of the developing caterpillar.
Right: fully developed and nibbling away egg shell prior to emergence.

It takes 4-5 days for the egg to hatch. The young caterpillar eats just enough of the shell to emerge, and has a length of about 2.8mm. Its has a cylindrical body shape, rather short dorso-lateral and sub-spiracular setae and a tuff of long setae on the posterior end. The head capsule is black and there is a black "colar" on the prothorax. 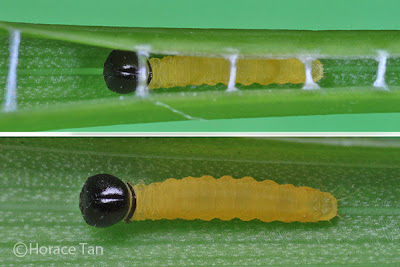 The body is initially goldenrod in colour but changes to yellowish green after a few feeding sessions on the leaf. The newly hatched constructs its leaf shelter as one of its first tasks after the hatching. Between feedings, the caterpillar retreats to its shelter for rest and safety. By the time the caterpillar lies dormant in its shelter for the moult to the 2nd instar, its length has reached 6mm. The 1st instar takes about 2.5 days to complete. 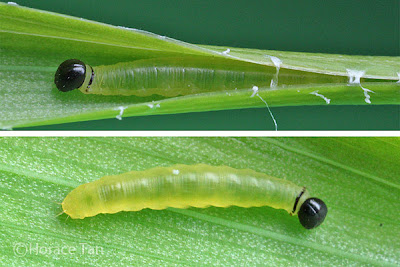 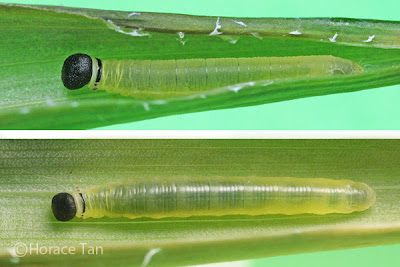 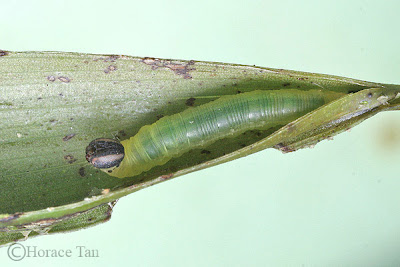 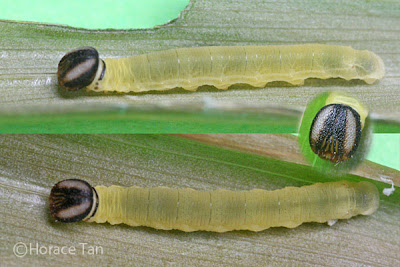 The 4th instar caterpillar also resembles the 3rd instar caterpillar with the only visible change being the two lateral white stripes on the head capsule are now broader and more dominant. In addition, thin white outlines, in the shape of an inverted "Y", also appear within the central black marking. This instar lasts 2.5-3 days with the body length reaching up to about 22mm. 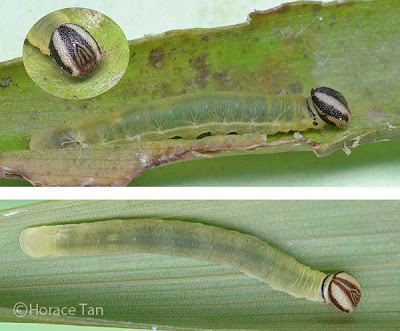 The 5th (and final) instar caterpillar has no visible change in markings or coloration from the 4th instar. This instar takes about 5 days to complete with the body length reaching about 35mm. 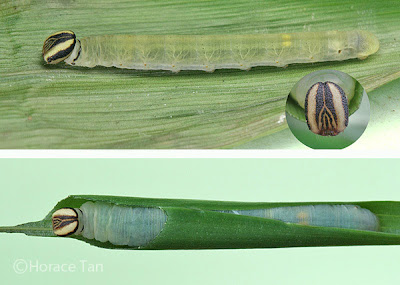 Towards the end of the 5th instar, the the body of the caterpillar shortens and its coloration changes to a translucent pale green. Soon it becomes dormant in its leaf shelter and enters the prepupatory phase which lasts for one day During this time period the body color of the pre-pupa changes to yellow, and a fair amount of silk threads and white waxy substance are deposited within the tight confine of the leaf shelter. 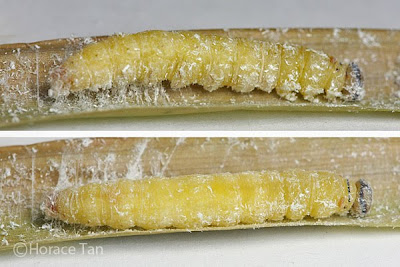 Two views of a pre-pupa of the Large Dart.

Pupation takes place within the tight leaf shelter. The pupa does not secure itself with any cremastral attachment nor any silk girdle. It is mainly yellow brown and has a rather long abdomen and a thorax. Length of pupae: 20-22mm. 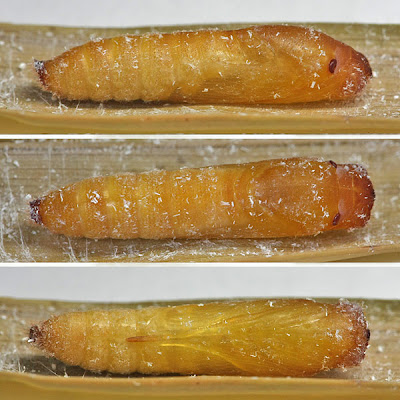 Three views of a pupa of the Large Dart, length: 21mm

After 8 days, the pupa becomes mostly dark brown with yellow markings apparent in the wing pads. Eclosion takes place the next day. 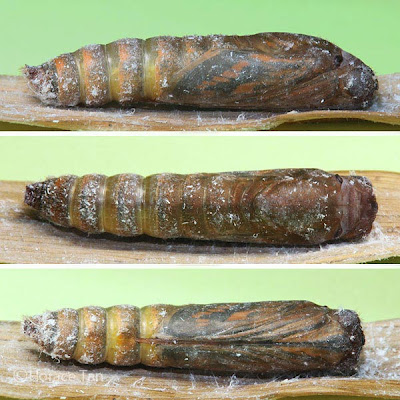 Three views of a mature pupa of the Large Dart, shortly before the eclosion event. 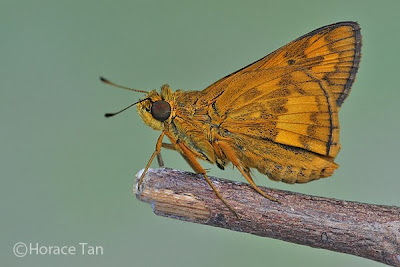