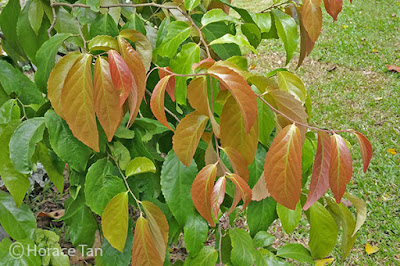 This 4th instalment of our Butterflies' Larval Host Plants series features Flacourtia inermis, a species formerly placed under Flacourtiaceae but has recently been moved to the Salicaceae (willow family) as a result of phylogenetic analyses using DNA sequence data.The species name refers to the fact that there are no spines on the trunk (unarmed).


Batoko Plum is native to the India and Malesia (a floristic region which includes the Malay Peninsula, Malay Archipelago, New Guinea and Bismarck Archipelago) regions. In Singapore, it is commonly planted in parks/gardens and on roadside for shade and ornamental purposes. Elsewhere, Batoko Plum is usually cultivated as a fruit tree. 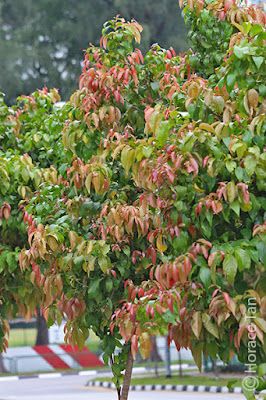 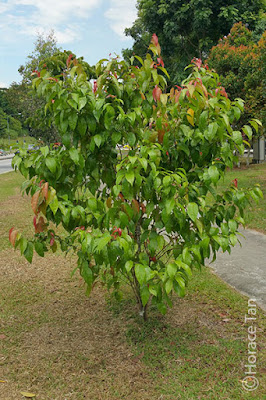 
Batoko Plum is a small to medium-sized tree that grows up 15m, with trunk up to 35cm in diameter. It features simple, alternate leaves. Each leaf is ovate-oblong to ovate-elliptic in shape, about 8-12cm long and has toothed margin. Young, emerging leaves are red in colour. As the leaves grow to its mature size, they decolorise to reddish green and finally to green. The upper leaf surface typically has a glossy appearance. 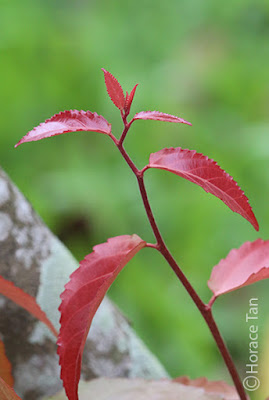 The reddish young leaves of the Batoko Plum. 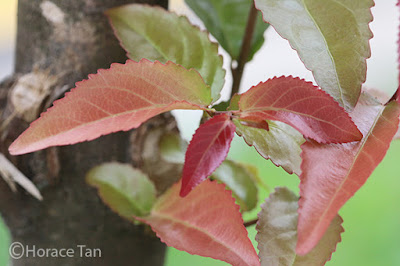 Maturing leaves as the reddish coloration fades away. 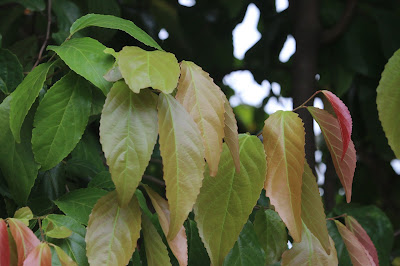 A mix of leaves in all stages of development of the Batoko Plum. 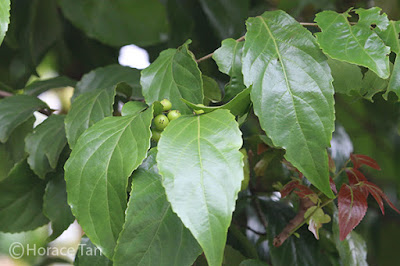 Mature leaves of the Batoko Plum.


Flowers of the Batoko Plum are small, creamy yellow and occur in short racemes (simple, unbranched inflorescene) which are up to 5 cm long. These flowers are dioecious (having separate male and female flowers). The unisexual flowers attract insects to act as pollinators in the reproduction process. 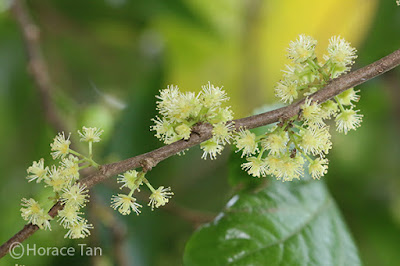 Racemes of flowers of the Batoko Plum rising from the stem/branch. 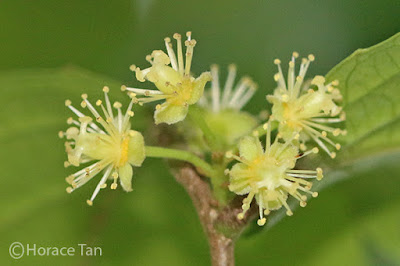 Close up view of the flowers.


Fruits occur in bunches and are spherical and berry like, 2 to 2.5cm in diameter. They are initially green but turning pink to red when fully ripened. They can be eaten raw but are sour and acidic in taste. Typically they are turned into jams, preserves and syrups. 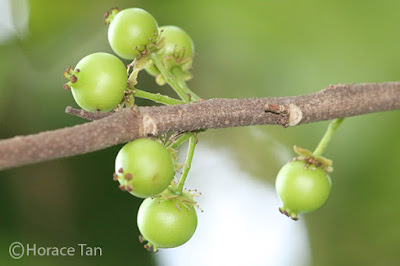 Young fruits of the Batoko Plum. 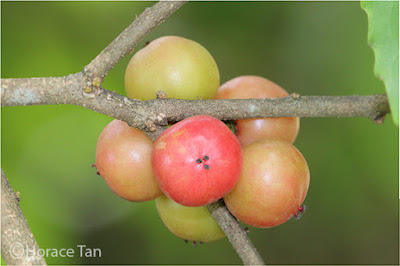 Maturing fruits of the Batoko Plum. 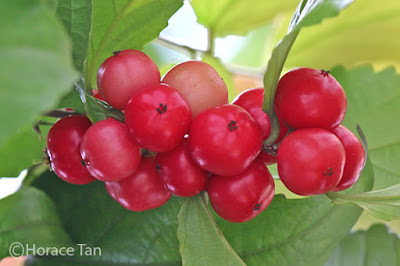 A bunch of ripened fruits of the Batoko Plum.


In Singapore, the Batoko Plum also serves as the larval host plant for two butterfly species: Leopard and Rustic. Both are members of the Nymphalidae family, Heliconiinae sub-family. 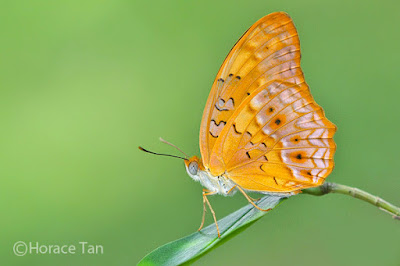 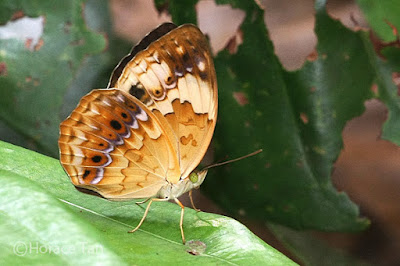 
Eggs of both Leopard and Rustic are laid singly on the young shoots of the Batoko Plum. Their caterpillars feed on the young and maturing leaves, and not on the fully matured leaves. 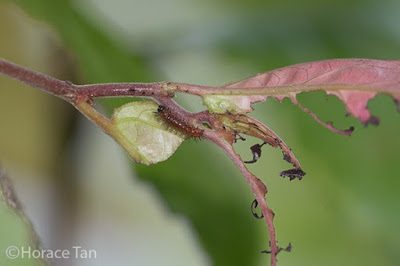 An early instar Leopard caterpillar found on a young shoot of the Batoko Plum. 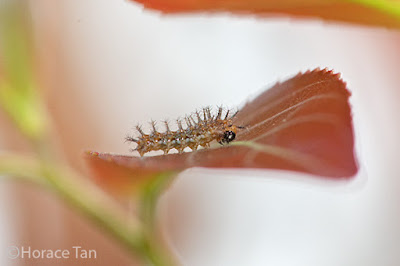 A 3rd instar Leopard caterpillar resting on a against young leaf of the Batoko Plum. 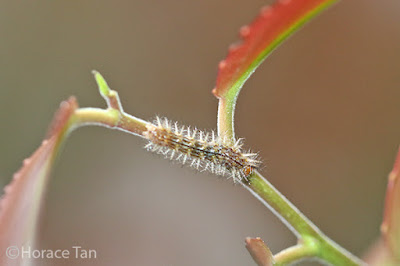 A 4th instar Leopard caterpillar on the move. 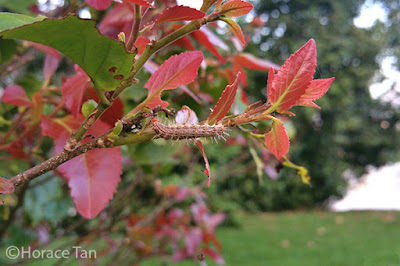 A final instar Leopard caterpillar observed in the Japanese Garden.


Typically, caterpillars of both the Leopard and Rustic butterflies choose to pupate on the underside of a leaf of the host plant. 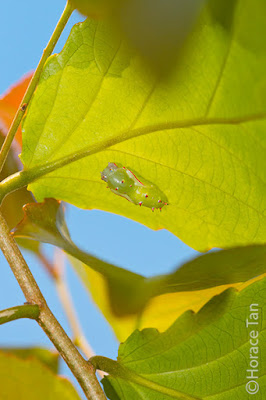 A pupa of the Leopard found on the underside of a leaf in the western part of Singapore. 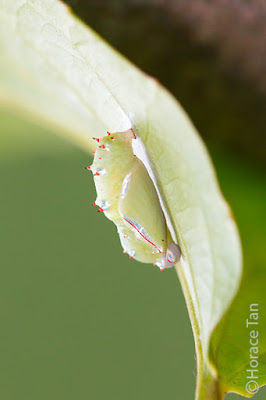 A close-up view of a pupa of the Leopard found on a roadside Batoko Plum tree.


Next time when you are out for a walk/jog in our parks, gardens, park connectors or along the road outside your house, check for the presence of the Batoko Plum. A sight of this plant usually implies the existence of a colony of Leopard butterflies in the vicinity.

Text and Photos by Horace Tan.
Posted by Horace at 9:23 PM 1 comments