Butterfly Mimicry and some recent findings 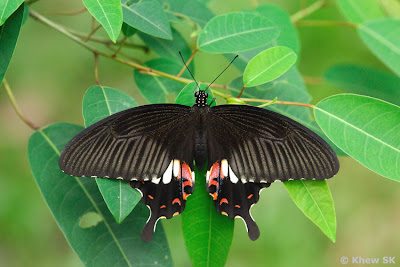 
In the field of evolutionary biology, the mimicry theory as proposed by Henry Walter Bates in 1862 supported Darwin's natural selection theory.  Batesian mimicry was founded on a system comprising palatable mimics and unpalatable models.  Bates discussed the resemblance between insect prey that are defended by virtue of being "unpalatable" and those which lack such a defense. Batesian mimicry is therefore a form of deceptive mimicry because "palatable" prey deceive predators by their resemblance to species that predators find distasteful. 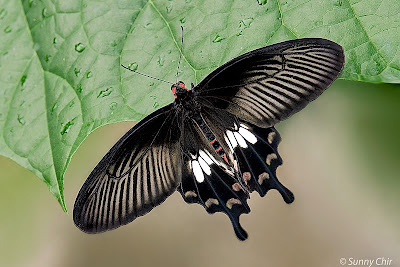 A open-winged Common Rose with its red/pink spots and body.  The species is known to contain Aristolochic acids in its body and is unpalatable to predatory birds


This theory of mimicry was further expanded by Fritz Muller in 1878 when he argued that, "if insectivorous birds learn to avoid unpalatable prey, and take a fixed number of given appearance during their education, then mimicry between unpalatable prey would be beneficial to individuals because the mortality costs of predator education would be partitioned out between members of the mimetic species." This approach spreads the chances of any one butterfly (or moth) being eaten over a larger number of species, and over a larger number individuals within a species. When a bird catches any one of these individuals, it quickly learns to keep away from all the species within the group.  This mimicry theory is now known as Mullerian mimicry. 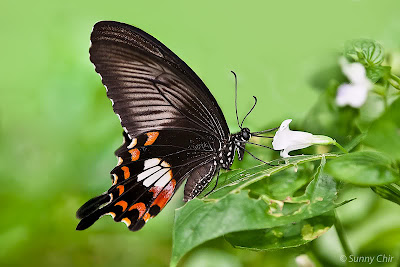 Alfred Russell Wallace, the renowned 19th century naturalist, presented a paper on mimicry to the Linnean Society in March 1864.  In this work, where Wallace referred to Batesian mimicry, and demonstrated that mimetic resemblance could be limited to the female sex (sex-limited mimicry).  Wallace described data which showed that within edible species from the Papilio genus (such as P. polytes), mimicry of noxious model species occurs in the female, but not the male. 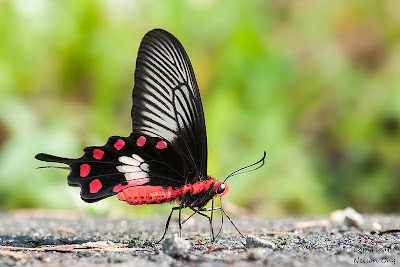 It was thus with this background, that lepidopterists in Asia tend to consider the female Common Mormon (Papilio polytes) as a mimic of the unpalatable Common Rose (Pachliopta aristolochiae).  In the "Butterflies of the Malay Peninsula, 4th Edition" on page 70, this reference is also alluded to where it was written "... form-polytes, which is a passable mimic of Pachliopta aristolochiae, but can always be distinguished by its entirely black abdomen". 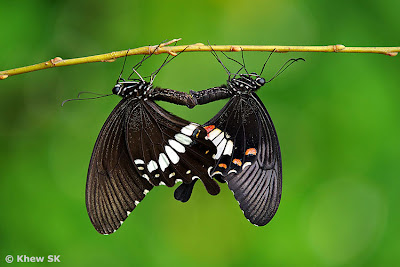 A mating pair of Common Mormon showing the "normal" male on the left, and the form-polytes female on the right.  Males are not the subject of mimicry and do not resemble any unpalatable models.


Recently, in his 2006 paper presented in the Journal of the Lepidopterists Society 60(2), 2006, 82–85, Peter Smetacek of Uttaranchal, India, conducted experiments with various Papilio species and their palatability with birds.  Amongst these species was the Common Mormon (Papilio polytes).  Peter concluded that the "present findings prompt a re-interpretation of the relationship between polytes and Pachliopta . The classic Batesian interpretation of polytes-Pachliopta mimicry predicted that only polytes benefits at the expense of Pachliopta, which it “parasitises”, and predators, which it deceives into shunning palatable prey. The new Müllerian interpretation suggests that the shared aposematic signals of the co-models (polytes and Pachliopta spp.) result in enhanced predator learning and the benefits of this accrue to all the butterfly species involved. The relationship between the butterflies is one of asymmetrical Müllerian mimicry, since polytes appears to be only moderately distasteful while the Pachliopta genus is certainly more distasteful, with aristolochic acids in the body tissue." 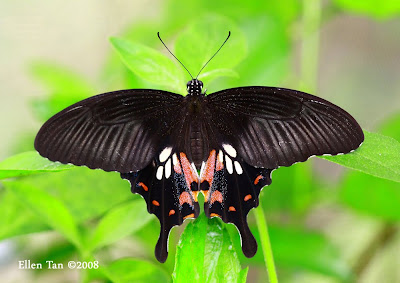 
Peter's study made reference to an earlier research that "Although the larvae of all Papilio butterflies are believed to be chemically protected by unpleasant taste and smell (Wynter-Blyth 1957; Klots & Klots 1959), this was not believed to be carried over to the adult stage except in the case of antimachus." 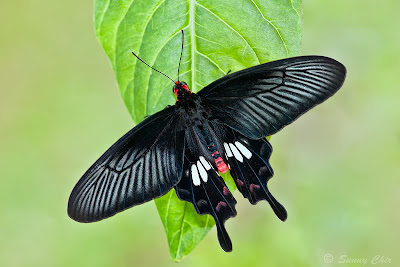 
Dr Krushnamegh Kunte, the author of the "Butterflies of Peninsular India, 2000, Universities Press" expressed his doubts with regard to Peter's experiments in the Journal of the Lepidopterists’ Society 61(1), 2007, 121–, and stated, as a concluding note, "The idea—that a classic Batesian mimic is actually a Müllerian mimic—is intriguing but controlled experiments are required before a definitive conclusion can be reached."  The Journal also printed, in the same edition, Peter's reply, standing by his conclusions on his earlier experiments, that the Common Mormon-Common Rose mimicry is Mullerian and not Batesian. 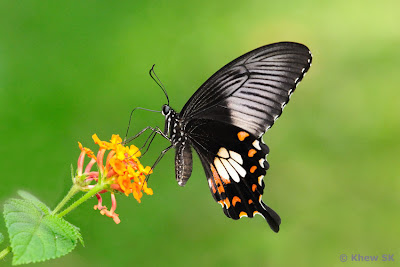 A female form-polytes feeding in flight.  Its slow unhurried flight also mimics that of the Common Rose 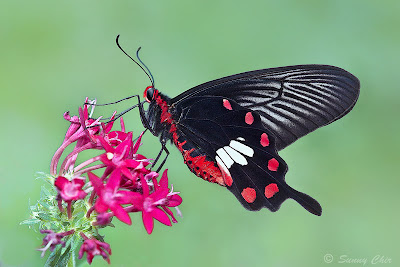 A Common Rose displaying its aposematic red spots and body


(1) Typically, in the Batesian mimicry theory, the model is often more common than the mimic.  So there is some room for consideration in the case of the Common Mormon-Common Rose association, because in Singapore, the female form-polytes Common Mormon is the commoner of the two species.  The Common Rose is much rarer, and at times, not very often seen for months on end. Hence, if the mimic is more common than the model, then how successful is the protection by mimicry for the Common Mormon? 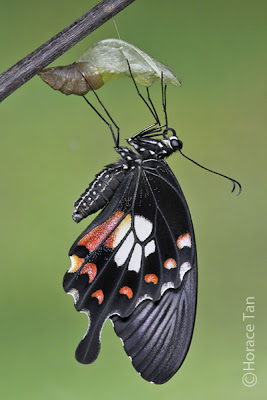 Mimic : A newly eclosed female form-polytes of the Common Mormon


(2) A second observation supporting the argument that Rutaceae feeders may be unpalatable would be the presence of at least four Great Mormon female forms in Singapore, when all of the unpalatable models have been missing for at least 3-4 decades of field observations here. One of the unpalatable models, The Common Clubtail (Pachliopta coon) does not even exist in Singapore, whilst the mimic form-distantianus occurs very rarely! In such a situation where there are only mimics and no models, even though the flight pattern of the mimics still resemble the original models, is there some evidence to suggest that these Rutaceae-feeding Papilio memnon are indeed unpalatable in the first place? 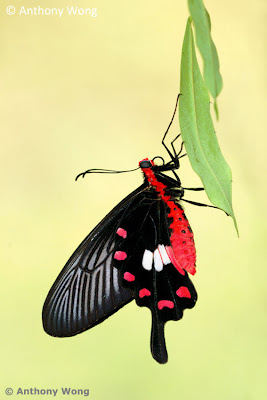 
(3) However, if all Rutaceae feeders can sequester some form of distasteful chemicals in their bodies to make them unpalatable to varying degrees, does it mean that the common Lime Butterfly (Papilio demoleus), Banded Swallowtail (Papilio demolion), Blue Helen (Papilio prexaspes) and Great Helen (Papilio iswara) are all unpalatable as well?  Are there field observations to support this conclusion one way or the other? Or are some Rutaceae Papilionids able to sequester the distasteful chemcals from their host plants more adeptly than others? 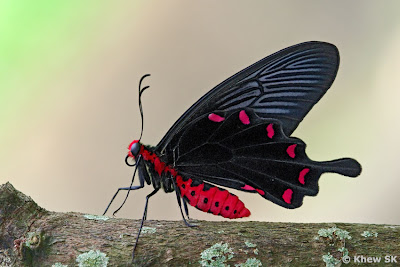 A black hindwinged variant of the Common Rose that made its appearance in Singapore for a period of time in 2007 & 2008, and then as suddenly as it appeared, it disappeared for the past few years.


(4) Also, an intriguing observation would be that, if the caterpillars of Rutaceae feeders like the Lime Butterfly and Common Mormon are distasteful, why is there a need for the first four instars of the early stages to camouflage themselves by resembling bird droppings?  Could it be that the concentration of the distasteful chemicals only reach an optimal amount to be effective when the caterpillars reach the final instars?  Or are there some other reasons? If not, why the need to camouflage yourself, when you are already distasteful? 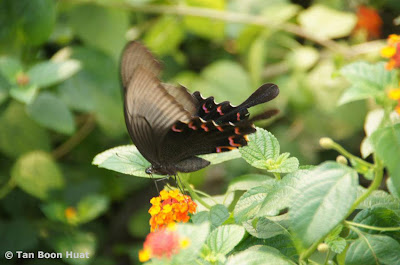 A recent shot of a rather strange female Common Mormon that does not have any white markings on its hindwings at all!  Is it trying to mimic the "black" variant of the Common Rose?  Or is this just a rare aberration?


These recent findings and debates throw a new light on the classical Common Mormon-Common Rose mimicry theory and with further field observations and experiments, it is hoped that some researcher may reinforce Peter Smetacek's findings and support his conclusions, or on the contrary, prove that Wallace's theory for these two species continues to prevail.  Any of our readers out there who have field observations, photographs or other theories, please feel free to share them with us. 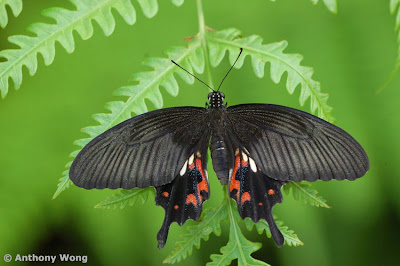 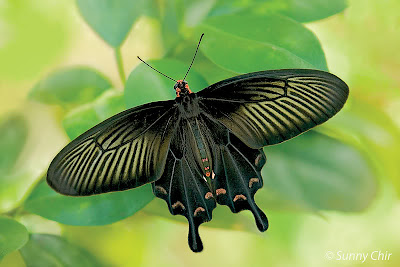