Butterfly of the Month - December 2019 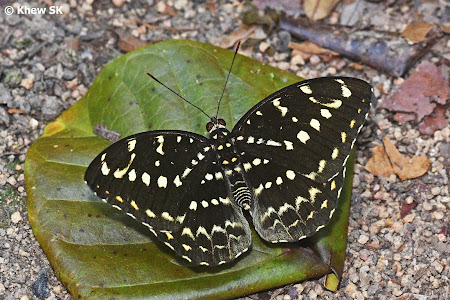 
And we reach December 2019, the final month of the 10-year period starting from 2010, we stand on the threshold of 2020 and an exciting new decade ahead. The world is changing at an even faster rate, with unprecedented technological disruptions, new experiences and a new way of life that we would never have dreamed of in the 20th century. 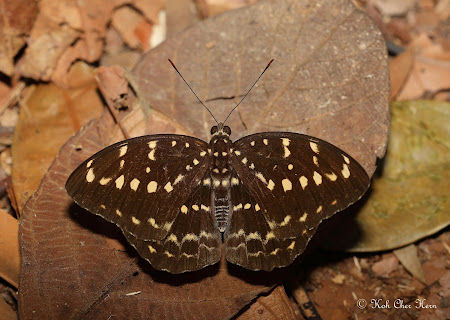 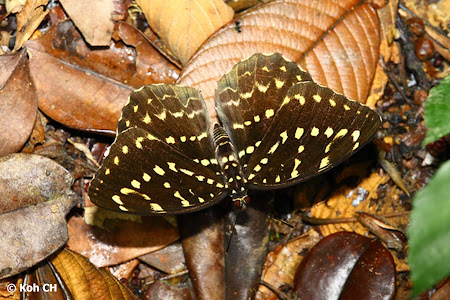 In the developed and emerging economies of the world, it would be hard to imagine life without the ubiquitous smartphone that has penetrated every aspect of our daily lives. It is this "computer in our hands" that has accelerated so many changes in our our lives, from ordering food to daily mobility and consuming information and news. Today, it is almost unthinkable that there are still people around who does not carry a smartphone - so dependent are we on it. 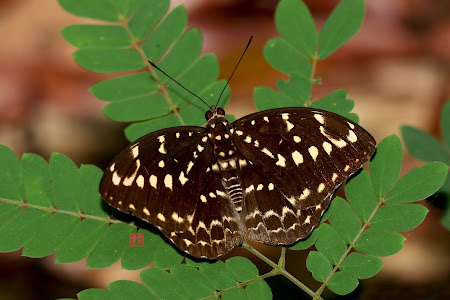 A Yellow Archduke sunbathing on a patch of leaves


And then comes AI or Artificial Intelligence, which is developing so rapidly that it is beginning to make Skynet (of the Terminator movies) somewhat a reality rather than fiction. Today, we hear possibilities of unmanned vehicles, unmanned stores, unmanned banks and unmanned schools? One begins to wonder what the world will be like in 2100? 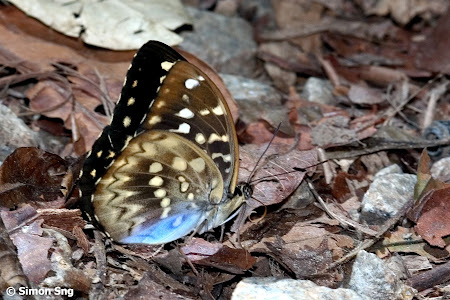 The subject of environmental issues and climate change will be more and more actively debated. Countries that have the means, are already looking at how they can protect themselves from the adverse effects of climate change, whilst there are some that ignore the signs or are just too helpless to do anything effective. But this is a global issue and not a geographical nor political one. After all, don't we all breathe in the same air everywhere we go and it's not air that belongs to only one country? 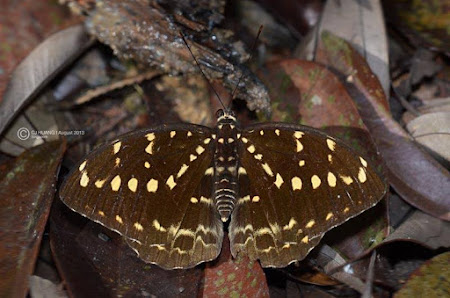 Some newsworthy items in Singapore include the decision to put the mass transit Cross Island Line right below the nature reserve. Whilst it sparked off a huge debate when it was first announced, the nature community engaged the authorities to try to find a middle ground. Although the outcome will not satisfy everyone, the optimists will conclude that at least the authorities have compromised and found mitigation measures to reduce the environmental impact of the construction of this mega transportation project across a "nature reserve". 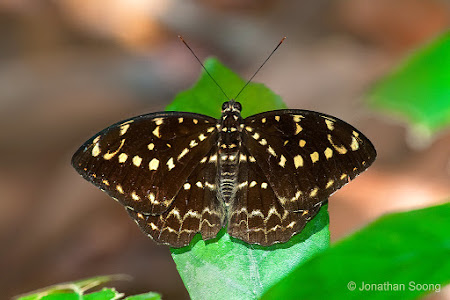 When PMDs (electric personal mobility devices) came into the environment and shared transportation networks with pedestrians, there are bound to be unfortunate interactions that neither side will find acceptable. However, it had to take several fatal accidents and lives lost, before the authorities took decisive action to ban them from shared pedestrian footpaths. And then the extent of the use of these devices in the food delivery business became obvious, as livelihood issues were raised. The problems of a developed and techology-dependent world! 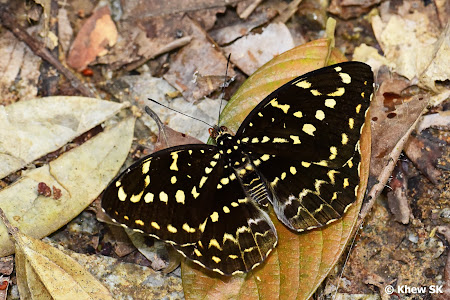 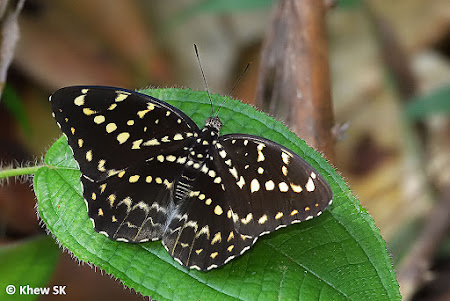 A Yellow Archduke perched on a leaf


The Yellow Archduke is an interesting species in that both the males and females are similar in appearance, but both look like the females of its related species, the Archduke and Dark Archduke. This often creates a confusion in the identification of the species, especially when all three can be found in the same habitats - in the shaded forest understorey of the nature reserves in Singapore. 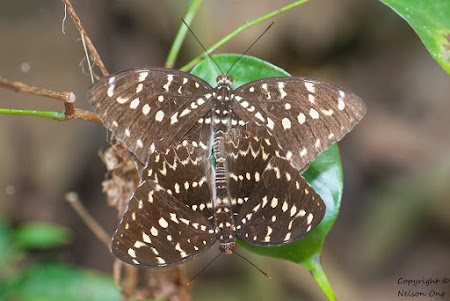 A mating pair of Yellow Archdukes


The species is usually encountered foraging on forest litter and overripe fruits on the forest floor. At its preferred habitats, sometimes several individuals may be found together, and engaging in "dogfights" just a few feet above the forest floor. They are skittish and alert to movement, making them rather hard to approach for a photo. At times, when they are feeding greedily, they may be sufficiently distracted to allow an observer to approach them without scaring them off. 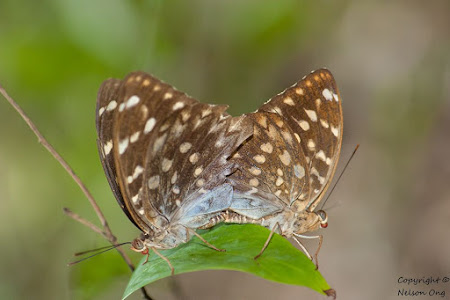 The Yellow Archduke is generally smaller in size, but is similarly marked as the females of the Archduke and Dark Archduke. Males and females are similar in appearance, except that the males are usually smaller in size. The species is dark brown above, with yellow spots on both the fore and hindwings. 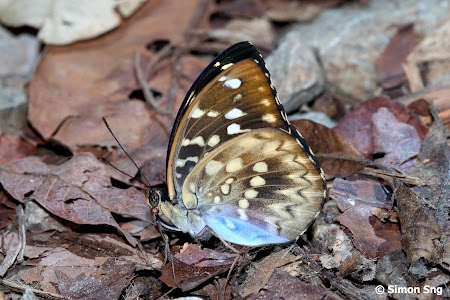 A Yellow Archduke showing its undersides whilst foraging amongst leaf litter 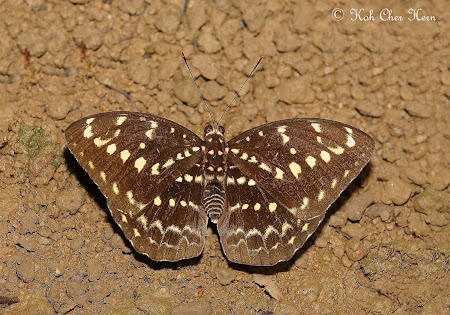 A weathered Yellow Archduke puddling along a muddy footpath 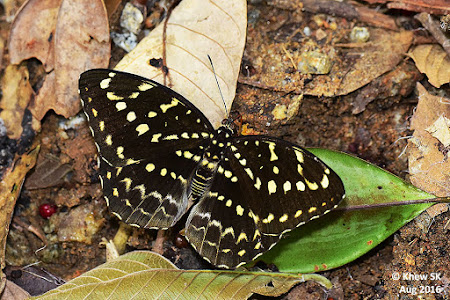 A Yellow Archduke feeding on ripened berries on the forest floor


Besides the underside of the hindwing, one of the most obvious diagnostic feature of the Yellow Archduke, is the 3rd spot from the base in space 1b of the forewing. This spot is coalesced into a single spot, whereas it is split into two spots in the female of the Archduke and Dark Archduke.

Posted by Commander at 9:18 PM 0 comments