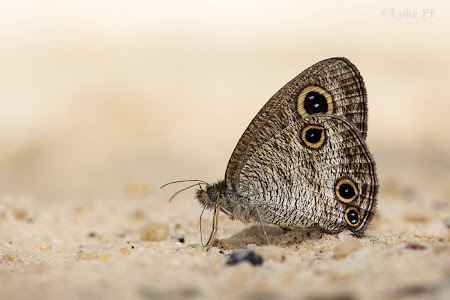 In Singapore, this is the largest of the Ypthima species. Though common, the Common Three Ring is rather local in distribution and keeps close to the forest edges in grassy patches. The species usually flutters close to the forest floor, sometimes foraging amongst leaf litter. When at rest, it stops to perch with its wings folded upright. At certain hours of the day, it opens its wings to sunbathe at sunlit spots.
An earlier article on this blog showcases this "Cinderella of Butterflies" as one species that is usually ignored by butterfly watchers. This shot of a Common Three Ring, photographed by ButterflyCircle member Loke PF last weekend, is unique in that the species is not often encountered puddling. In this case, it was puddling on a muddy footpath - a behaviour that is not usually associated with this species.
Posted by Commander at 8:00 AM 0 comments