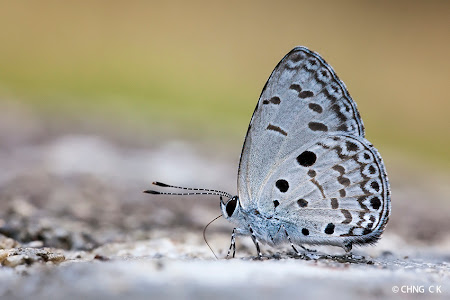 The Common Hedge Blue is a widespread Lycaenidae that is moderately common in Singapore. It is often encountered within the nature reserves of Singapore, but is also regularly encountered in urban parks and gardens. It has a strong erratic flight, but often returns to the same perch to sunbathe at certain times of the day. Males are regularly encountered puddling along damp forest paths and sandy streambanks.
The male is shining blue on the upperside with a narrow black marginal border. The female is pale greenish blue with broad black borders on both wings. The underside is a pale grey with a variety of streaks and spots. The markings can be quite variable, as described in an earlier article on this blog. This individual was photographed puddling by ButterflyCircle member Chng CK last weekend.
Posted by Commander at 8:00 AM 0 comments