Butterfly of the Month - January 2011

Butterfly of the Month - January 2011
The Harlequin (Taxila haquinus haquinus) 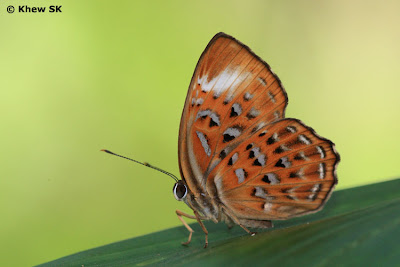 Time passes quickly again, and the first month of 2011 is almost over. The temperate countries around the world experienced one of their worst winters in recent years, and the local climate in Singapore swings from hot, humid days to thunderstorms and miserable rainy days. Australia also experienced one of the worst floods that many people can recall. A sign of things to come with climate change and global warming? Warning signals to take note of... 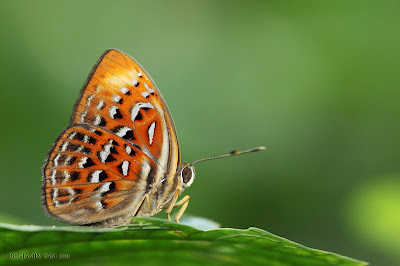 The Singapore economy bounced back from the global financial crisis, and recorded an amazing 14.7% GDP growth for 2010. With the prices of housing reaching unprecedented heights and the economy heating up, the unsustainable growth is probably headed for some contraction this year. But any growth is better than none, and the economies in Asia are definitely in a better shape than those in the west. 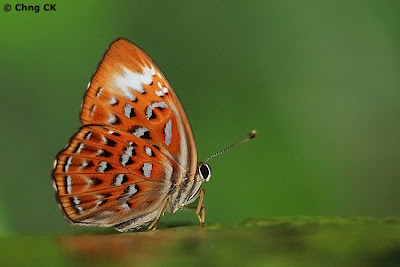 The month of January is known for its association with the gemstone garnet. The name garnet probably came from the Middle English word gernet meaning 'dark red'. The gemstone, usually associated with its deep red colour (but the gem also comes in other colours), is the birthstone for the month of January. 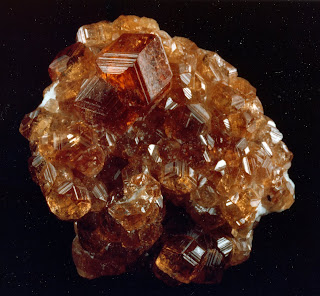 "By her who in January was born
No gem save garnets shall be worn
They will ensure her constancy
True friendship and fidelity."
- Gregorian Birthstone poems 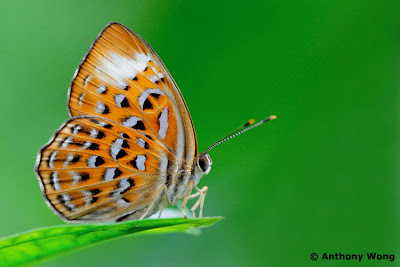 And so this month, we feature a reddish brown butterfly, the Harlequin. Belonging to the family Riodinidae, the Harlequin was first re-discovered on the military training island of Pulau Tekong in the late 1990's, but another colony of them was found in the north-western part of Singapore in a patch of forested area. 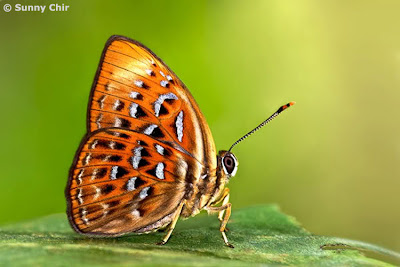 The butterfly is usually shade-loving, hopping from leaf to leaf under the heavy canopy of large trees, twisting and turning as it flits from leaf to leaf. It appears to feed on some unknown substances on moss-covered leaves. Both sexes often stop with half-open wings on the upper surfaces of leaves, and at times remain still for long periods of time unless disturbed. 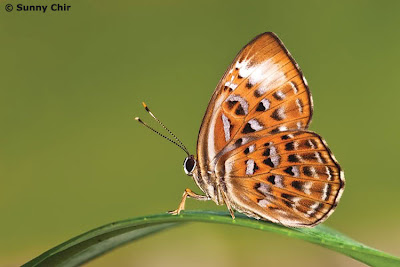 The male Harlequin is brownish black above with an obscure pale reddish brown subapical patch on the forewing. A unique feature of this family of butterflies is that the males have four fully-developed legs for walking, whilst the females have all three pairs of legs fully functional. 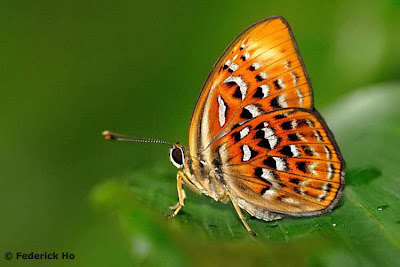 The female is generally similarly marked like the female of the Lesser Harlequin but the whitish subapical patch on the forewing is not crossed by dark dusted veins. The upperside is patterned and coloured as on the underside, unlike the male. In both sexes, the underside is reddish brown, with outwardly pale greyish-blue edged black spots. 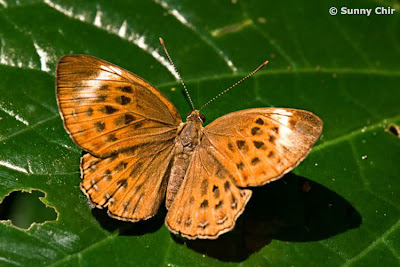 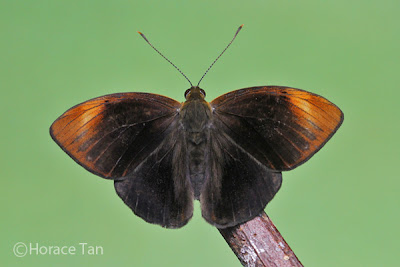 The unfortunate thing about the location for this moderately rare species, is that the site where they are usually found in numbers, is slated for the redevelopment of a CleanTech Park. Ironical, that the site stands as an example of a "green and sustainable" development masterplan, but may effectively wipe out this species from Singapore, if this is the last known colony of the Harlequin on the main island. 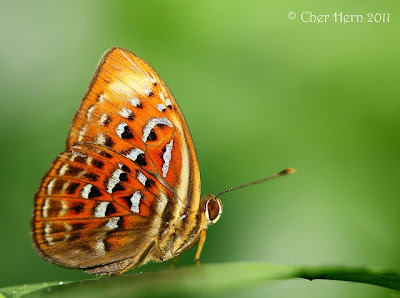 However, as pragmatic Singaporeans always take such interventions into Mother Nature's creations in their stride, there is little that can be done to stop the engines of progress, but to make all attempts to translocate the Harlequin to other hopefully similar habitats where it can thrive. 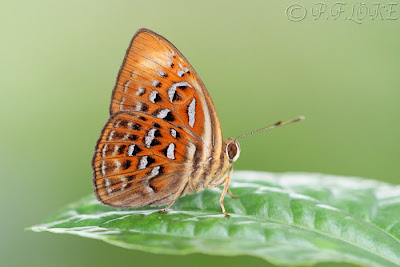 Several translocation attempts have proven futile or with very dubious success and this is probably the Harlequin's last stand as the site where they are always found, is right in the path of a road widening project to serve the CleanTech Park. A final attempt at translocation will probably be attempted before the site becomes a pristine tarmac-ed lane for the future road. 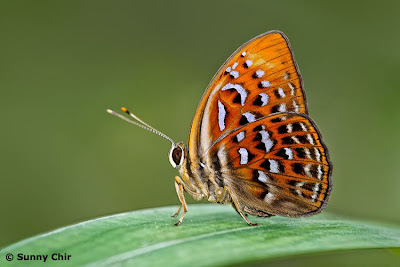 Will this be one of the last few times that this pretty "Metalmark" be seen in Singapore? Will all these photographs by ButterflyCircle members be all that remain for future generations of nature enthusiasts and butterfly lovers to see? We certainly hope not. 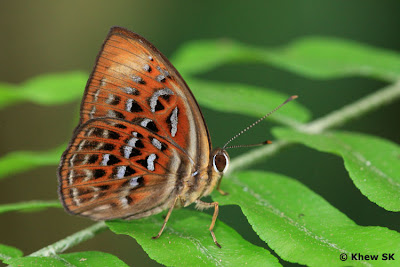 Posted by Commander at 8:00 PM 2 comments