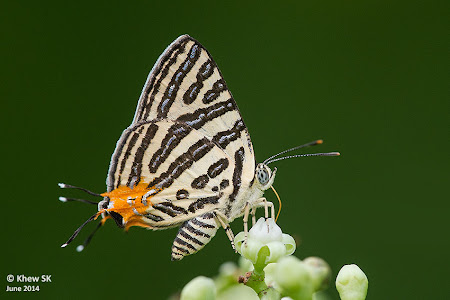 This pretty little Lycaenid is one of two species of the genus Spindasis to occur in Singapore. In certain localities, the Club Silverline and its cousin, the Long Banded Silverline (Spindasis lohita senama) can occasionally be found in numbers, and would be considered moderately common. The Silverlines are so named because of the silvery markings on the undersides of the wings, framed by reddish brown or black streaks.
The Club Silverline is a fast-flyer but can often be encountered feeding at flowering plants, like this one is shown, feeding on the flower of the Bandicoot Cherry (Leea indica) at an urban park in Singapore. At certain hours of the day, the butterfly can be observed to open its wings to sunbathe in the sunshine, displaying its beautiful deep blue uppersides.
Posted by Commander at 9:54 PM 0 comments